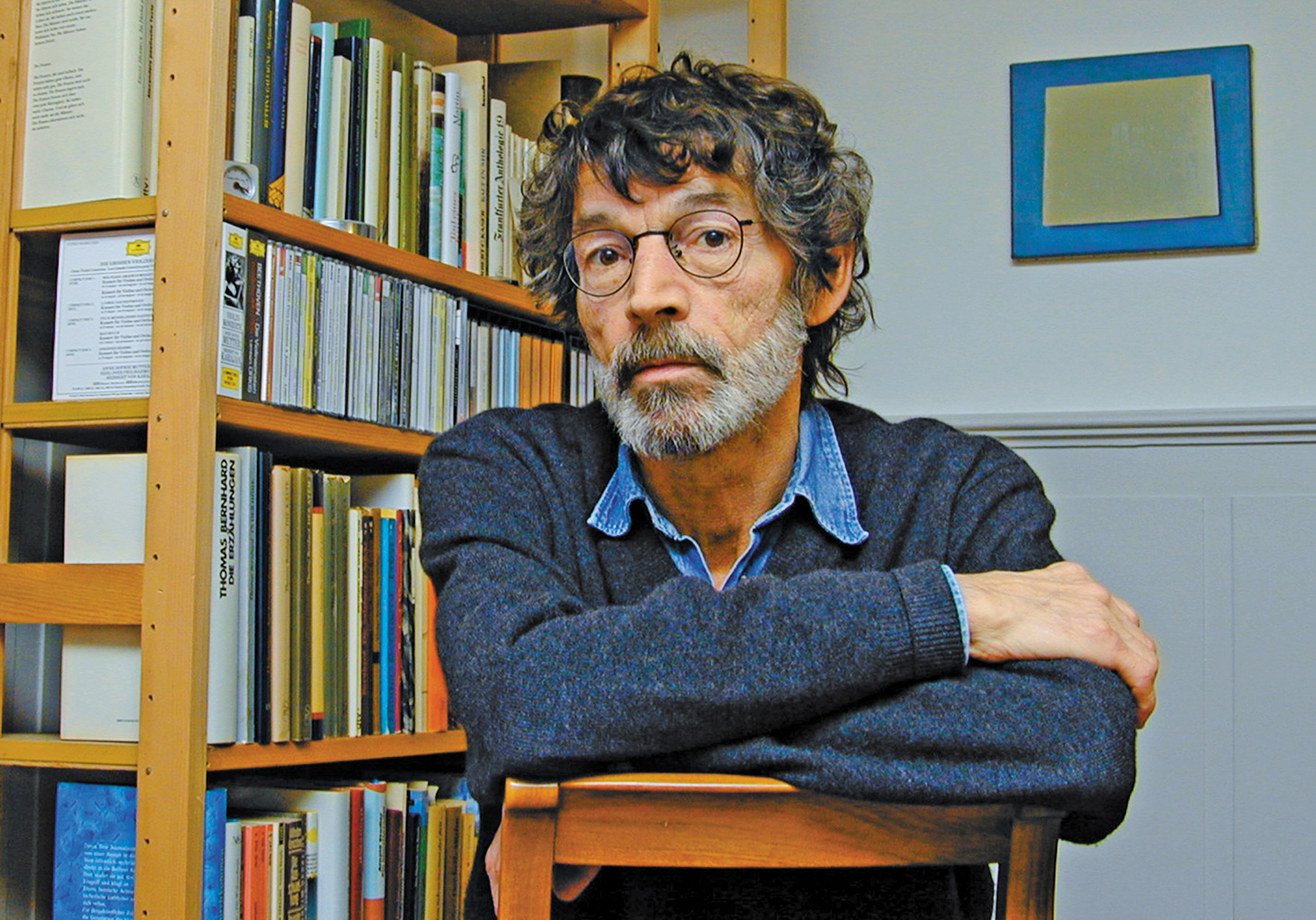 Zündel’s Exit arrives in an English translation for the first time since its appearance in Austria thirty years ago. Its author—a Swiss student of philosophy and psychology, born in 1944 and responsible for more than a half-dozen books, most of which have been unavailable to English readers—is hardly known in this country, making Michael Hofmann’s translation of this sly, confounding work a welcome contribution. Markus Werner finds company among an elect and heroic group of voluptuaries, but of a special kind; like Flaubert’s Bouvard and Pécuchet, or Beckett’s Murphy, or the high-pitched monodrama of the impasse we get in Buster Keaton, Zündel’s Exit gorges on the limit point of madness, of fidgeting hands and heads and hearts punished by the sclerosis of cramped conditions. Solitude supplies one way out, although the route to the promised land is split: the terrors of the abyss can be allayed by redefining the terms of one’s relationship to the world (think of the eponymous and reflective hero of Rilke’s The Notebooks of Malte Laurids Brigge, for example, whose mind is only as swift as its talent for turning any city block into a repository of fantastic historical associations); or they can be inventoried, enumerated and thus made unexceptional (paperwork, highway signposts, operating instructions, sucking stones in a coat pocket). Werner’s fractured creation, Konrad Zündel, composited here from diary scraps and a few piecemeal memories of the book’s narrator, looks, at least initially, like an epicure of this latter category of solitude. But the book is too appetitive, too obsessive, to stop at the unexceptional. Zündel’s exit, the slammed door of a kinked consciousness, is nourished by a stubborn feat of mental alchemy.

There’s a hint of this early on. Werner’s wounded picaro, arraigned by his wife and deployed alone to Italy on his summer holiday, turns a rather bald matter of the mouth into the tuft of an epiphany. “There is something brusquely proprietorial in the way Zündel’s tongue forces itself into the alien, still-soft gap in his gums,” says Zündel’s friend the Reverend Busch, who narrates the book. “Curious, how a missing incisor can narrow one’s perspectives. And how it can give one the sense of being the focal point of the whole world.” Then, a little later, come the discoveries in a train washroom:

Zündel bent down disbelievingly to inspect it. It was a human finger, yellowish, encrusted with black blood, the nail blue. Straightaway, Zündel could sense he was not equal to this discovery. When he straightened up, he saw a wallet in the trash basket. He eyed it. Then he pulled out a cigarette, lit it, and thought: Keep cool, boy. —He pulled the wallet out of the wastepaper basket. It was his own, Zündel’s, wallet.

The missing tooth, the severed finger, the lost wallet retrieved from the least likely of places—Werner supplies the standards, in the form of two or three intrusions upon the everyday, for judging the correctness and precision, the chronic prodigious absurdity, of Zündel’s splintered Grand Tour of the head. Not being equal to our discoveries—a problem of scale—may be one way of paraphrasing what Werner’s novel is about. It may also have something to do with its apparent closeness to that special taste for the incongruous called, with varying degrees of accuracy, surrealism, in literature (Lautréamont, Aragon, Breton) as well as in movies, where any word or gesture can be juxtaposed against the clock (Buñuel and Cocteau aside, the great screwball or physical comedies of the 1930s, for example, share with Werner their mania for pitching words and persons at the greatest possible speed, with the consequence that they become deformed, uncanny, a little untoward). Werner’s habit of marking Zündel’s travels with a very limited litany of transitions—“a little before seven,” “until midnight,” “for five minutes, maybe, ten at the most”—estranges a number of lowly chance encounters and fiendish observations from any discernible reality. When Zündel trails a prostitute through the narrow streets of Genoa, or when he eavesdrops on conversations in train compartments, we get an elided vision of a larger, increasingly staccato chronology. The idea: to complete a series of minuscule, incremental movements, strung together discontinuously, designed to illustrate the last known moments of Zündel’s life. The result: frustrating, even delirious, because what Werner hides from view through his shuttling of clipped narrative details has the noxious effect of turning whatever we do learn about Zündel into something strangely inadmissible to the imagination. The feeling: perverse. Thus, Zündel’s defeat: “Everything is hostile, everything that happens to me exceeds my capacity to endure it.”

This is all the more pertinent given the book’s presentation, which offers up Busch’s memories with selections from Zündel’s notebooks. “I feel no inclination to provide attributions for every last detail: this was in Zündel’s notes, this was something he told me personally, this is something I heard from others, this is purely conjectural,” Busch says. “If I had felt any such obligation to pedantry, then I would hardly have had the courage to tackle my friend.” Across twenty-four numbered sections, hearsay and conjecture are given their due; Busch’s account is less exegesis than reportage, amended by our knowledge that, at some point before the start of the novel, Zündel’s three-week Italian journey came to a calamitous end, that he was classified and institutionalized as a madman, and that he has since escaped, his whereabouts (or those of his remains) unknown. When Zündel tells us, “I’d like to be able to see myself retrospectively, as the banal prequel to a rotting corpse,” he may just as well be giving us a description of Werner’s achievement. The cropped thinking, the aphoristic thrust of so much of what Zündel thinks and feels, his pithy assertions of taste and reflectiveness, have the darkened, terminal aspect of a life outspent: “What yesterday still had the appearance of value is sudden trash. Everything is subject to continual revision.” “Negation is the only thing that keeps one alert.” “The history of the world is a process of mangling.” And so on.

The point is that Zündel writes in a spirit of incredulousness. A mind as vulnerable to its own emotional ineptitude as this one, as chastened by erotic manias and the syndromes of a century (“Concrete architecture. Violence. Anonymity. Coldness. Competition. Bad air. Bad water. Noise. The A-bomb. The B-bomb. The C-bomb”), is a mind overculminated, pushed to the end. Reading the novel, one thinks of the fanatic Professor Kien, immolating himself among his 25,000 books in Elias Canetti’s Auto-da-Fé; or of Dostoyevsky’s Underground Man or Sartre’s Roquentin, but without the psychological density or philosophical inflections of either of these. Instead, Werner serves up, simultaneously, the gnarled contents of a mind at the end of its career, and the cool, exacting voice of a narrator claiming omniscience. This puts Zündel’s Exit beyond psychology and outside philosophy, as if another, more extreme and totalizing experience could be in store.

“Things you don’t like about me,” begins a letter from Zündel’s wife, Magda. Among the complaints: “That I turn on the hot water tap unnecessarily vigorously, that I tip the Nescafé out of the jar into my cup instead of using a spoon, that I squeeze the top of the toothpaste tube, and never fold up the bottom, that I am sometimes rough when I wind the clock, that I use too many fashionable expressions, that when pouring wine I forget to hold the bottle over the label.” Zündel quibbles over the scent of her hair (“A bland scent, he thinks, undecided between mournfulness and fury”), the quality of her handwriting, the way she speaks and dresses. A matter of taste, yes, and the principle of so much of what Zündel says and does, settled as he is in the narrowing gap between style and extinction, elegance and the corpse. There is a world to romance, a mind to extinguish: “The mind chokes off pleasure in living,” Zündel writes. “The fact that the female praying mantis (mantis religiosa) bites the head off the male at the onset of copulation and thereby heightens his sexual prowess…can surely come as no surprise. The spontaneous life is—headless.” Another, much earlier Swiss writer would make the blighted serial eroticism of his hero answerable to virtue, to the integrity of the passions (hence Constant’s Adolphe, published at the start of the nineteenth century). But Zündel, lusting after his own vanquished mind, has no use for virtue. No possible perspective, Werner seems to say—least of all a moral one—can recompose a life diminished in the face of rancid alternatives. Anyway, a nobler point of view would be inadequate to the needs of such an unflagging imagination. What matters is the least pondered way of having the world.

Werner’s isn’t a study of any kind. In its language—exacting, repetitive—and by the comic roguishness of its tone, Zündel’s Exit unpacks the incompatible shreds of a wrecked consciousness. This makes it, in some sense, familiar, as I’m sure it will be to anyone who’s read novels by Lars Iyer or Édouard Levé, or who is experienced in the techniques of illimitable energy and attention expenditure typical of a good deal of the arts in the last few years. As we may be learning now, there are new ways of aiming and distributing attention—madness being just one metaphor for imagining what these might be like—and new areas of intelligence to be found. Hence the interestingness, and the great pleasure, of Werner’s newly translated little book, thirty years too late yet right on time.