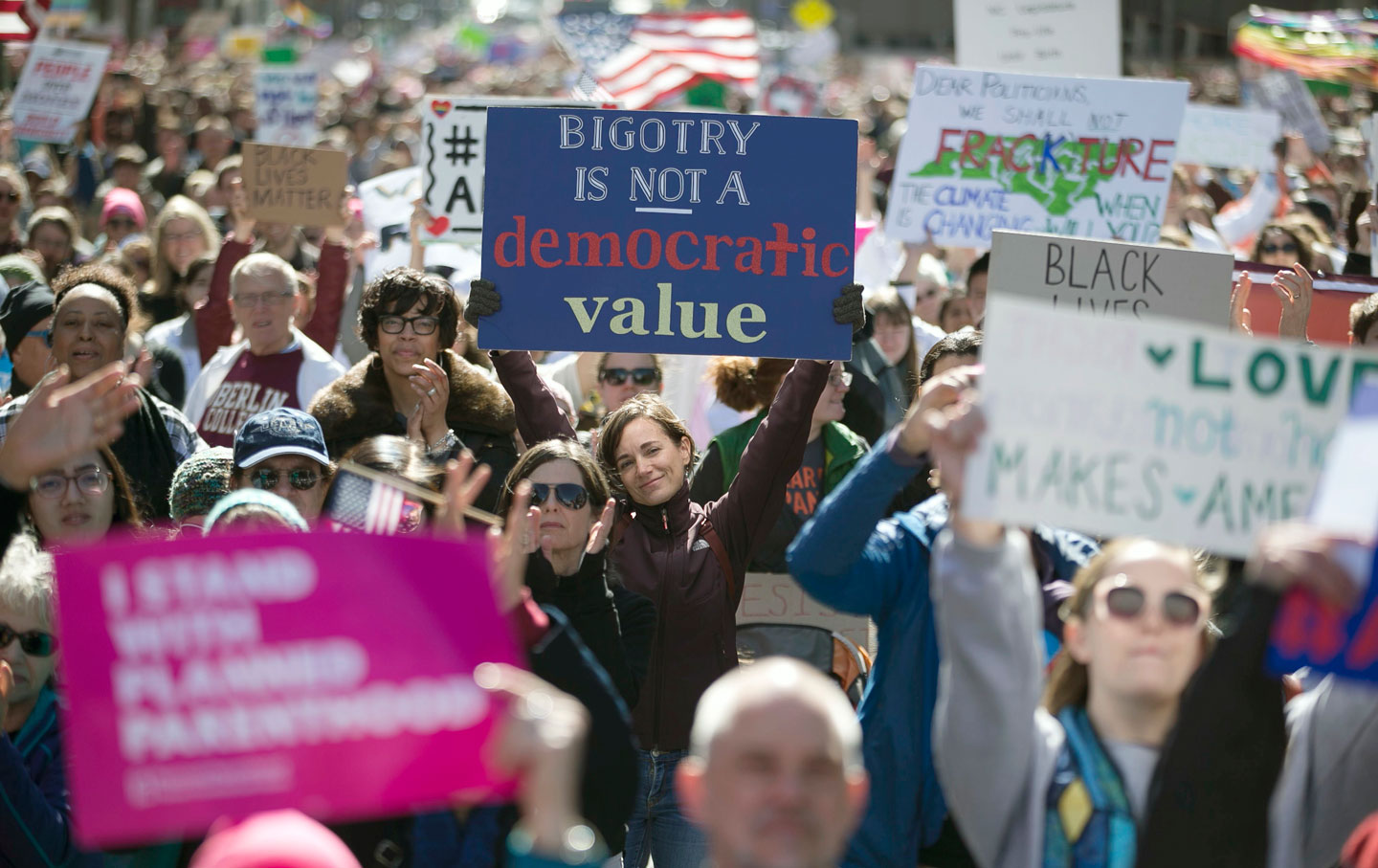 Raleigh, NC—Not many people would blame Karen Holliman if she stayed home in Durham and enjoyed an unseasonably beautiful Saturday. She didn’t.

“I’m here with stage-four cancer, and it’s in every vertebra in my back. I just really wanted to be a part of this,” Holliman says, as singing and chanting echoes off of the buildings in downtown Raleigh. “Every day is crazy…. I just really worry about the future of our children, our environment, our schools. All of it.”

Holliman, along with her friend and neighbor Heidi Hannapel, joined an estimated 80,000 others and nearly 200 groups at the 11th annual Forward Together Moral March, led by North Carolina NAACP president Reverend Dr. William J. Barber II. And despite the political circumstances that surrounded the march—chiefly, the new Trump administration and a state legislature that still has two veto-proof Republican majorities—Barber is optimistic about the future. “I think we’re seeing the adolescent growing pains of a third Reconstruction,” he says.

In 2016, North Carolina seemed to be the epicenter of mass protest in the United States. The passage of anti-LGBTQ and anti-worker House Bill 2—known by most Americans as the bathroom bill—in March sparked numerous protests throughout the year. Large demonstrations in protest of a special session in December aimed at curbing the power of the state’s new Democratic governor ended with over 50 people arrested. And outside of Raleigh, the Charlotte uprising in September brought to light community anger over the death of Keith Scott, who was, at that point, the sixth person killed by Charlotte-Mecklenburg police in 2016.

This year, following the inauguration of President Donald Trump, the kind of protests frequently seen in North Carolina have been spreading across the nation. Up to 5 million people worldwide joined in the Women’s March in January, including 17,000 in Raleigh. Demonstrations at airports round the country following Trump’s Muslim ban included over a thousand people who converged on Raleigh-Durham International Airport and the arrest of six in Charlotte. And last weekend, thousands protested Trump’s immigration policies near the state legislative building.

Barber says the recent protests have inspired him. “It’s actually powerful to see the power of love and justice bursting out from the seam, that we’re not going to stand for this authoritarianism and radical nativism,” Barber told The Nation by phone on Thursday. “Like Dr. King said in the sixties, it’s a ‘marvelous new militancy’…. you can start changing Southern states by having a movement that brings brown and white and black people together. If that happens, then you change the South, the electoral strategy, and the look of America.”

This new energy was reflected at the march on Saturday, which, according to the state NAACP, attracted the largest crowd in 11 years. They’ve come a long way: The annual march began back in 2007, when the state government was still under unified Democratic control. “We recognized that in the South, when you look at the history of the first and second Reconstruction, there needs to be a fusion coalition,” Barber says, a reference to the late-19th-century alliance of state Republicans and Populists who briefly beat back Jim Crow Democrats. “We saw that people who voted against advancing voting rights and opportunity were the same people who voted against the living wage, who voted to cut public education. Republican, Democrat, didn’t matter. So we thought, ‘If they’re smart enough and cynical enough to be together, we need to come together.’”

Those early years brought significant victories, Barber says, including a higher minimum wage, same-day registration, and a Racial Justice Act that aimed to tackle racial disparities in death-penalty sentencing. Then the other shoe dropped: In 2010, Republicans took control of the legislature, and two years later, the governor’s mansion. “If the country wants to look at what a Trump administration will look like, look at [former] Governor [Pat] McCrory,” he says, “The first 50 days, [North Carolina Republicans] did what Trump is doing. They attacked, attacked, attacked. But you can fight back.”

And fight back they did. Once the new government began taking an axe to civil rights, public education, and the safety net, the Moral Monday protests began. Nearly a thousand people were arrested that year in nonviolent demonstrations. The following year, the annual march drew over 80,000 people, the largest before Saturday.

McCrory is gone now, undone by the self-inflicted wound of HB 2 and reduced to clueless opining about “paid protesters” on Meet the Press. But Reverend Barber thinks that the rest of the country can take an important lesson from North Carolina: the South is necessary for progressives to dig the country out of its current predicament. “Movements don’t come from DC they come from places like Montgomery and Birmingham,” he says. “You have to fight from the bottom up, and we have to have a major fight for the South.”

The crowd on Saturday reflected the face of a changing South. Christian Carreño, a young man attending his second Moral March in three years, solemnly hoisted a pride flag high in front of the Raleigh Memorial Auditorium. “It gives me hope,” he says of the rash of protests in the last few months. “People are noticing, they’re realizing what’s going on, and they know they need to stand up and do something about it and get their voice out.”

But despite the South’s continuing transformation, it’s still engaging in some of the same old fights. “My mama’s here, 83 years old,” Barber bellowed during his remarks in front of the old State Capitol, where slave-owners once held office and some of the earliest Jim Crow laws were implemented. “She said, ‘I never thought I could have a baby, and when he would be 50 years old, he’d still have to fight some of the same battles that I fought.’ But she said, “‘Boy, you better fight!’”

That battle will need people like Carreño and Holliman, as well as people like Barbara Seawright and Sylvia Steele. Both women live two hours away in heavily conservative Davie County. “It’s a Trump county, but we’re not Trump people,” Seawright laughs. She says she’s marching for equality and health care; Steele, who has non-Hodgkin lymphoma, says she’s demonstrating because black lives matter—“especially women,” she adds.

Holliman says she’ll be working in Davie County alongside Seawright and Steele to defeat Republican US Senator Thom Tillis when his current term ends. Like so many others, this is her first foray into activism. “Everyone’s having to become an activist,” Hannapel says matter-of-factly. “If people weren’t actively doing it before, everyone’s getting out on the streets now, or getting on the phones, or on Facebook. Whatever it takes.”

Editor’s Note: A previous version of this article incorrectly stated that HB2 was passed in February of 2016. It passed in March of that year, and the piece has been updated.