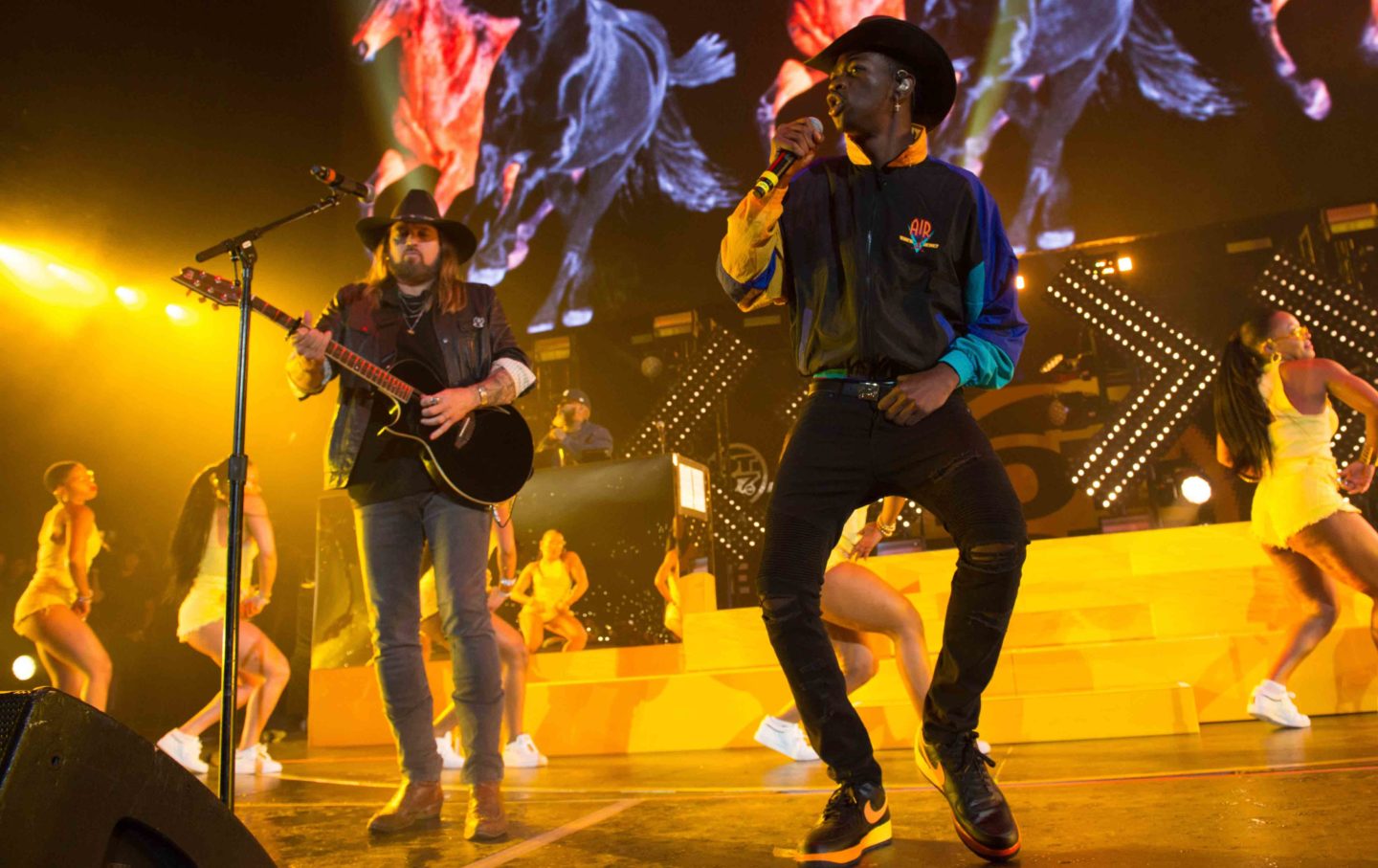 Creative collaboration is a kind of barter, a negotiation for the exchange of assets and liabilities. In the unexpected coming together of hip-hop and country music that topped the pop charts this spring, “Old Town Road,” the terms of the deal are clear: Lil Nas X, a previously little-known young songwriter and rapper from Atlanta, got a measure of old-style authenticity by taking up the tropes of the lonesome cowboy, and Billy Ray Cyrus, a legacy country act who had gone years without receiving much attention for doing more than being Miley’s dad, gained a claim to some 21st-century cachet with a hip-hop remix. Critics of this unexpected arrangement would be right to note that it is mutually exploitative and beneficial but more successful as business than as art.

“Old Town Road” is simplistic, catchy as a nursery rhyme, and easy to dismiss as a joke. It is a joke, of course—and brazenly jokey, as it spits out country-music clichés about “ridin’ on a tractor” and “cheating on my baby” and tosses off pure gag lines about “bull ridin’ and boobies” and “Wrangler on my booty.” In fact, its very silliness—its elemental nature as neither a country-and-western song nor a hip-hop track but a specimen of a third category, a novelty song—is the key to its success. The audiences for country music and hip-hop are so far apart, so isolated from each other’s aesthetic values and ideologies and so protective of their respective domains that they are able to meet up only on the neutral ground of humor.

The jokiness of “Old Town Road” provides Lil Nas X and Billy Ray Cyrus with safe cover. “I’m kinda doing the other guy’s thing but kinda making fun of it,” they’re both saying through the goofball intensity of their performances as well as the Mad Libs randomness of the words and music. Cyrus gives himself an additional layer of protection from charges of falsity by basically performing an act of self-parody. Bellowing the hook that opens the track, “I’m gonna take my horse to the old town road / I’m gonna ride till I can’t no more,” he inflects the generic lyrics with more throaty drama than he brought to anything on his 2011 album of pandering jingoism, I’m American. He sounds like Jimmy Fallon doing a Billy Ray Cyrus impression and pushing a little too hard.

It is conceivable that a deeper union of country and hip-hop may come in the wake of “Old Town Road,” now that artists in both arenas can see plainly that such a thing is possible and can be profitable, highly profitable. Lil Nas X originally released his version of “Old Town Road” on YouTube in December 2018—a very long time ago by the pop-music calendar—when he was unsigned and unknown. The song, being self-evidently something of a joke, clicked with the Yeehaw Challenge, in which TikTok users competed to show off their most ridiculously country outfits to the sound of the track. By March, the song had made it onto three Billboard charts: the Hot 100, Hot R&B/Hip-Hop Songs, and Hot Country Songs, and Lil Nas X was signed to Columbia Records.

After Billboard pulled the track from the country chart for failing to “embrace enough elements of today’s country music,” Cyrus stepped in and made a remix, adding his voice and acoustic guitar to Lil Nas X’s original. Billboard dug in and kept the Cyrus version off the country chart, too, despite mounting complaints of racial bias in the decision. The controversy carried with it an implied charge of racism in country music more broadly, a criticism supportable by the evidence of recent years, but hardly accurate historically.

At the time of its emergence as a genre of commercial popular art, categorized for the selling of records and promoting through radio play, country-and-western music (or “hillbilly,” as it once was called) was a form of thrown-together elements from a wildly varied range of sources. The early repertoire of songs that came to be thought of as emblems of the homegrown was filled with products from the song factories of Tin Pan Alley in New York. The Carter Family, whose recordings for Victor in the late 1920s are regarded as the Big Bang of country music, repurposed material composed by commercial tunesmiths and published for sale to families in the heyday of the sheet-music era, such as “Mid the Green Fields of Virginia,” “Little Log Cabin in the Lane” (retitled by the Carters as “Little Log Cabin by the Sea”), and their signature song, “Wildwood Flower.”

The sonic vocabulary that virtually defines country music is a multicultural mishmash, too. The banjo, the sound of which immediately triggers thoughts of traditional country and bluegrass, is an African-American invention, based on instruments made by Caribbean slaves from West Africa. The pedal steel guitar came from Hawaii. It has been prevalent in country music since Jimmie Rodgers’ recording of “Tuck Away My Lonesome Blues” in 1929 and was popularized long before that by the Hawaiian performer Joseph Kekuku. Rodgers, the father of country music, was a master hybridist whose signature vocal device was the yodel, an Austro-Bavarian technique that he and other Americans, black and white, picked up from German touring groups. Deeply influenced by black music, he drew from the blues extensively and in 1930 recorded a blues-based yodeling feature titled “Blue Yodel 9” with the jazz pianist Lil Hardin and her husband, a trumpet player named Louis Armstrong.

In 1962, when Ray Charles made his celebrated amalgam of country, soul, pop, and jazz, Modern Sounds in Country and Western Music, it was at once a nod to the variegated roots of country and a statement of challenge to the way the music had begun to shrink and harden. Soulful and melancholy, sweeping and emotionally raw, the album had hard-swinging big-band arrangements by Gil Fuller and Gerald Wilson, string orchestrations by Marty Paich, and jazz solos by alto saxophonist Hank Crawford.

Released today, Modern Sounds in Country and Western Music would certainly not qualify for the Billboard country chart. It lacks the requisite elements of today’s country music. In other words, it lacks an obedience to musical and cultural constraints. Charles took a ride down the old town road of country’s musical landscape, but he was barreling in a car with a V-8 engine. He took unexpected turns. As Lil Nas X and Cyrus would in their ways, he found pleasure in going off the map. And he infused the music with joy without making it a joke.