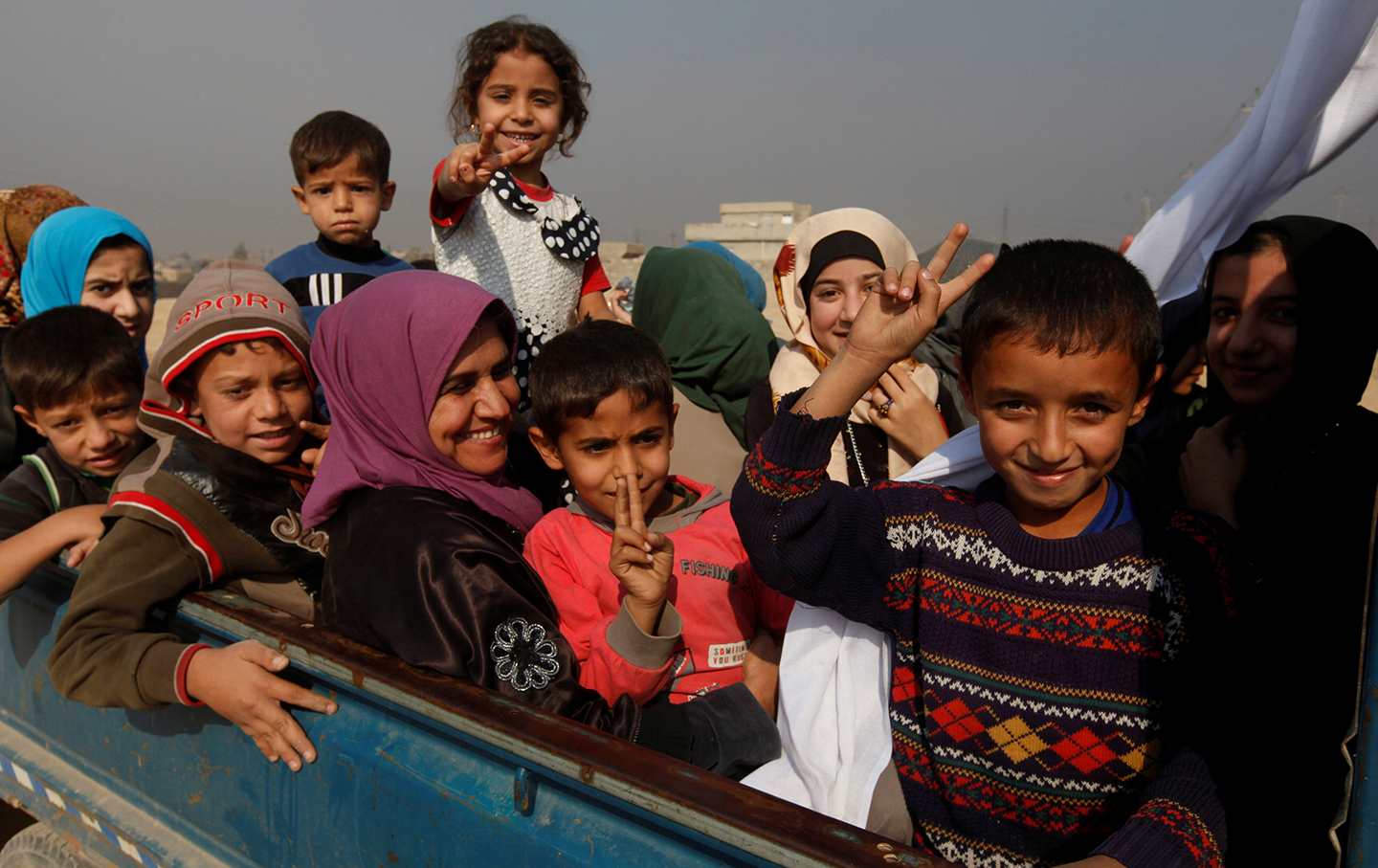 Qayyarah, Iraq—On the cold concrete floor of a makeshift tent in Qayyarah refugee camp in northern Iraq, Azzi elegantly balances a slim Gauloise cigarette between the middle and index fingers of her left hand.1

“I used to sell these cigarettes,” the 69-year-old grandmother of 28 says, smiling mischievously. “I did it right underneath ISIS’s nose.”2

Almost three years ago, Azzi’s home city of Tel Abta, a city strategically poised between Mosul and Raqqa, fell to the Islamic State, prompting a radical shift in daily life for its residents, who were pressured to pledge allegiance to the terrorist group or risk death. If they chose not to convert, their survival depended on adhering to strict new laws—such as pants trimmed just above the ankle for men, and veils and gloves that completely covered the faces and hands of women. 3

Smoking cigarettes—one of Azzi’s most beloved social activities—was strictly forbidden. “They would raid our houses, looking for these,” she says, picking up a small metal ashtray with a few smoldering cigarette butts, playfully flicking it with her fingers so that the embers danced. “We had to spray perfumes to mask the smell if we left the house.”4

A black-market cigarette trade flourished—both as an act of rebellion and as a coping mechanism.

While smoking cigarettes is technically permitted under Islam, the Islamic State categorizes smoking as “slow suicide”—thus banning the smoking of all cigarettes, water pipes, and cannabis as part of its extreme interpretation of the religion. Naturally, a black-market cigarette trade flourished—both as an act of rebellion and a coping mechanism for life under the Islamic State. 5

“So, I sold and smoked the cigarettes just to spite them,” Azzi continues, taking long, victorious drags of her cigarette as she speaks. While dozens of citizens living under ISIS control in Mosul and the surrounding areas are running similar illicit operations fueled by cigarette smugglers coming in from Syria, the punishment if one is caught either smoking or selling cigarettes is extreme, and sometimes deadly. A man can face a punishment of anything from 40 lashes to torture or beheading, depending on luck alone. A younger woman can be thrown into a ditch and publicly stoned, sometimes until death, for smoking or for any other behavior considered improper.6

The first time Azzi was caught, she had to pay a fine of 500,000 Iraqi dinars—the equivalent of almost $450. The second time she was caught, ISIS police stormed her house, arresting—and later torturing—her eldest son.7

“I knew it was time to stop once they touched my family,” she sighs, tapping her cigarette on the ashtray until the last ember burned black. “The money was good while it lasted, but then it wasn’t worth it anymore.”8

Refugees, particularly women, are enjoying newfound freedoms, but life in the camp is difficult.

After two miserable years under ISIS control, the Iraqi security forces advanced on Tel Abta during one of the first phases of the US-backed offensive to liberate Mosul and the surrounding areas. Anxious to leave the de facto prison that ISIS had created in their city, and fearing being caught in the potentially bloody crossfire, Azzi and her family decided to leave Tel Abta and stay in the refugee camp in this nearby town until it’s safe to return to their home. 9

“It isn’t perfect here, but thank god we aren’t under ISIS control anymore,” she smiles, looking around her small tent, a hastily constructed plastic tarp erected over a recently poured concrete floor no bigger than four square meters, which she shares with several other family members. 10

While Azzi, her family, and other people in Qayyarah—particularly women—are enjoying newfound small freedoms, such as appearing in public without wearing a face veil, and of course openly smoking cigarettes, daily life in the camp is proving difficult. 11

Although the United States carefully coordinated with the Iraqi Army and Special Operations Forces to support the offensive—the largest military operation in Iraq since the US invasion in 2003—attention to the inevitable humanitarian crisis that the offensive would set in motion was an afterthought. As the US Army prepared 5,000 Special Operations soldiers to support the offensive, Washington earmarked $181 million for the humanitarian response. Logistics were left to the United Nations and other NGOs on the ground. 12

“When we open a camp, we are looking at it holistically,” says Caroline Gluck, public information officer for UNHCR, the UN Refugee Agency. “Our first priority is that there is land demarcated, and water in store, with toilet and sanitation facilities and some kind of cooking area,” she continues, describing the conditions UNHCR needs to ensure in order to build a shelter. In Iraq in particular, the land must be far enough from the fighting to be categorized as safe, as well as free of land mines. 13

“Other services—like child-friendly spaces, schools, and health facilities—come later,” she adds. “When you are building such big camps, and there is a mass displacement going on, it can be slow.”14

As a result, more than 100,000 civilians who have witnessed the brutality of ISIS first-hand and are now displaced by the fighting—like Azzi and her family—are being taken by the truckload to camps like Qayyarah, which is overflowing. If they are lucky, they are given shelter in an overcrowded tent and told that they cannot leave the camp for at least one month, even if they have family waiting for them in other camps or cities. Clean water and sanitary toilet facilities are a rare, and at this point unexpected, luxury. 15

“We don’t have any privacy here. Our clothes are always dirty, and the children are always sick.”

“See? We don’t have any privacy here,” Meyede, a 33-year-old woman, also from Tel Abta, says, smiling and shaking her head at the children playing outside, who were screaming while punching at the flimsy walls of her tent.16

“We have to bathe in the same place we go to the toilet,” she continues. “Our clothes are always dirty, and the children are always sick.”17

While the camp’s conditions are not designed to be indefinite housing—those displaced by the fighting are expected to go home once their neighborhoods are liberated from the Islamic State—the battle is taking longer than originally anticipated. Even though areas like Tel Abta, and the eastern neighborhoods of Mosul itself, have technically been liberated from the Islamic State, ISIS mortars, sniper fire, and suicide bombers are exploding across the city.18

The second half of the Mosul operation, intended to liberate the western side of the city, is expected to displace as many as 700,000 more civilians, so the population of Qayyarah could become much larger.19

“We dealt with ISIS for two years,” Meyede says, sighing. Once the Islamic State captured her neighborhood, her husband, a police officer, was forced to flee, as he could easily have been accused of passing intelligence about ISIS to the Iraqi security forces. Meyede was left, along with her six children, to handle the encroaching militant group on her own.20

“First they tried to occupy my home,” she recounts, her eyes narrowing. “And I told them that if they dared to do this, I would go into the public square and scream until they took me away.”21

While Meyede’s home was ultimately spared, the militants occupied her family’s home next door, as a base, during their two-year reign. “Oh, ISIS,” she laughs. “They really don’t like it when women make problems for them.”22

Since the US-backed coalition advanced on her neighborhood to liberate it from the Islamic State, Meyede has lived in Qayyarah, watching days become weeks, and weeks become months, wondering when she will finally be able to go back home.23

“We all had to deal with the worst of ISIS,” she says, fanning herself as she looks at the miles of tents around her. “But now we have to live like this?”24