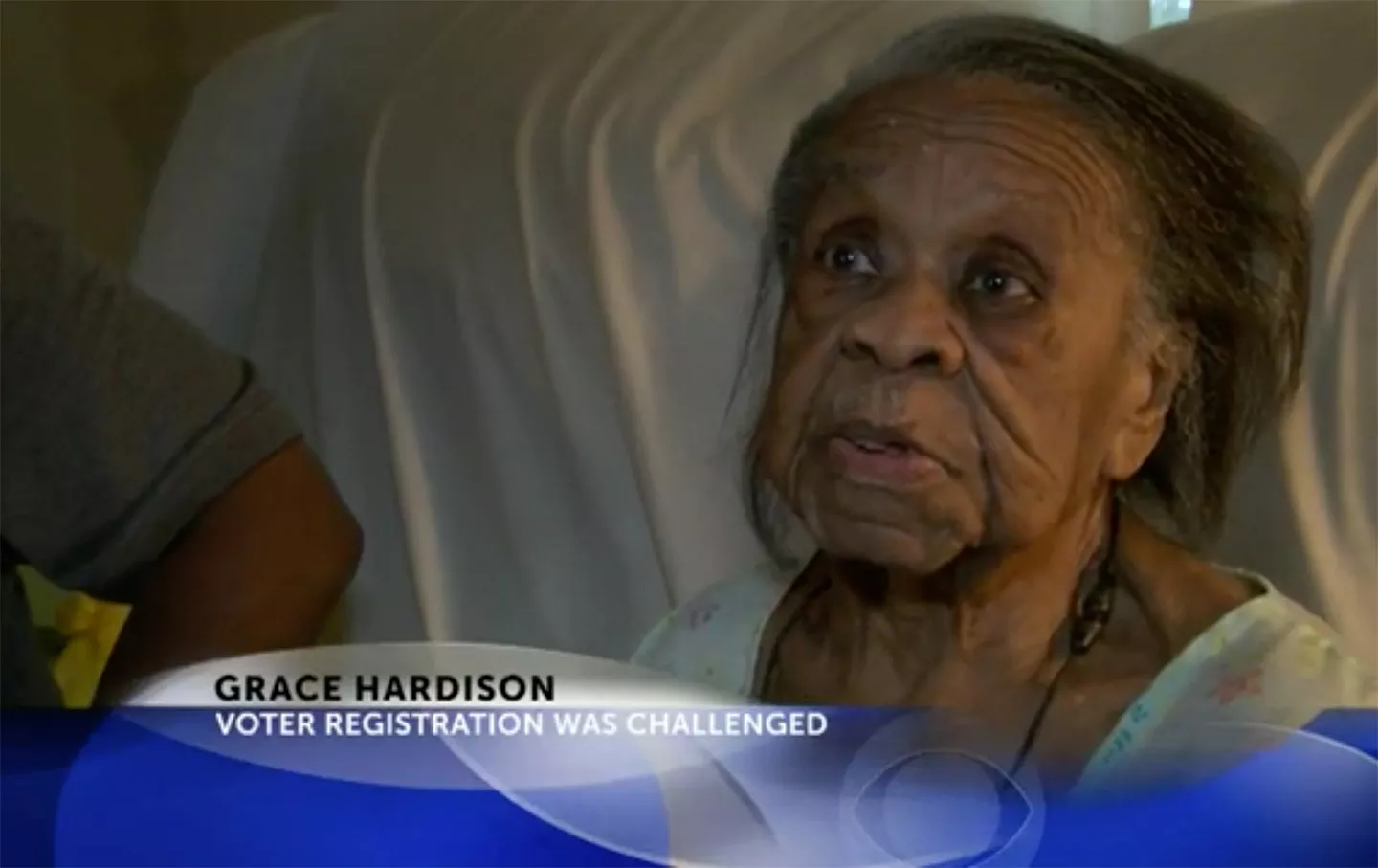 Just weeks before early voting began in North Carolina, Grace Bell Hardison, a 100-year-old African-American woman, was informed that her voter-registration status was being challenged. If she didn’t appear at a county Board of Elections meeting or return a notarized form, she would be removed from the voting rolls.

Hardison has lived in Belhaven, North Carolina, her entire life and voted regularly for the last 24 years, including in North Carolina’s presidential primary in March. “The first thing out of her mouth was ‘I can’t vote,’” her nephew Greg Sattherwaite said after she received the letter. “She loves to vote. She will not miss election time.”

Hardison’s registration was challenged by Shane Hubers, a Belhaven Republican, after a mailing done last year by a candidate for mayor. Mail that was returned as undeliverable in 2015 became the basis for the challenge list.

But the mailings included many incorrect addresses. “My mail comes to the post office,” Hardison told WNCT TV, which brought attention to her plight in an October 18 broadcast. “I don’t have no mail come to the house. Ever since I’ve been here, my mail has been coming to the post office.”

The challenge list compiled by Republicans also overwhelmingly targeted black and Democratic voters. “Of the 138 challenged, 92 of them were black and registered Democrats. 28 voters were unaffiliated, 17 were Republicans, and 1 was Libertarian,” reported WNCT.

Hardison’s challenge was withdrawn after a local outcry, but 14 voters have been purged so far in recent weeks in Beaufort County, which previously had to approve its voting changes with the federal government under the Voting Rights Act because of a history of discrimination.

The North Carolina NAACP says the purge violates the National Voter Registration Act, which “prohibits the mass removal of voters from the rolls within the 90 days prior to the election.”

“These purges have a long history of being racial and inaccurate,” says Penda Hair, a lawyer for the North Carolina NAACP.

In a letter to the state Board of Elections, the North Carolina NAACP pointed out that Hardison’s challenge was not an isolated case:

Since October 4, 2016, four individuals have submitted forms challenging 139 registered voters in Beaufort County. While several of these challenges have been withdrawn or resolved by the Beaufort County Board of Elections, 103 challenges are still pending and have been scheduled for hearings on October 24 and 29. Over 60% of the challenged voters are African American. The challenge list includes 59 active voters, including 19 individuals who have voted in the last year.

The same thing is happening in other North Carolina counties, reports the NAACP:

In Moore County, an individual challenger, N. Carol Wheeldon, submitted forms challenging approximately 400 registered voters, on the basis that first-class mail sent to those individuals’ addresses had been returned to the sender. The Moore CBOE notified those individuals of a hearing on the challenges, and, after holding the hearing on Friday, October 14, 2015, removed nearly all of the several hundred challenged registrants from the voter rolls

Wheeldon is the secretary of the Moore County Republican Party and has worked closely with the right-wing Voter Integrity Project, which has aggressively pushed discredited claims of voter fraud. The group recently accused Democrats of “Raping the ‘Retard’ Vote.”

The GOP-led voter challenges in North Carolina appear very similar to the type of voter purging and intimidation the RNC is prohibited from doing.

As I reported in The Nation:

In 1981, during a New Jersey gubernatorial election, the Republican National Committee launched a “Ballot Security Task Force” that sent sample ballots to voters in predominantly African-American and Hispanic precincts. When 45,000 letters were returned as undeliverable, the RNC tried to remove the voters from the rolls and hired off-duty cops to patrol polling sites in black and Hispanic neighborhoods of Newark and Trenton. Police carried firearms at polling places and wore armbands reading “National Ballot Security Task Force,” while the RNC posted large signs saying, this area is being patrolled by the national ballot security task force. it is a crime to falsify a ballot or to violate election laws.

After the election, the Democratic National Committee won a court settlement ordering the RNC to “refrain from undertaking any ballot security activities.”

The consent decree was upheld by the courts in part because of subsequent voter intimidation done by Republicans in states like North Carolina. The US Court of Appeals for the Third Circuit wrote in 2012:

In 1990, the DNC brought a lawsuit alleging that the RNC violated the Consent Decree by participating in a North Carolina Republican Party (“NCRP”) program. The DNC alleged that the RNC had violated the Decree in North Carolina by engaging in a program of the North Carolina Republican Party (“NCRP”) in which 150,000 postcards were sent to residents of predominantly African-American precincts. This program allegedly attempted to intimidate voters by warning that it is a “federal crime…to knowingly give false information about your name, residence or period of residence to an election official.” The postcards falsely stated that there was a 30-day minimum residency requirement prior to the election during which voters must have lived in the precinct in which they cast their ballot.

Now the DNC is asking the court to extend the order for another eight years following the Trump’s campaign call for poll watchers to “stop crooked Hillary from rigging this election.” From the legal filing yesterday:

Defendant Republican National Committee (“RNC”) has violated the Final Consent Decree…by supporting and enabling the efforts of the Republican candidate for President, Donald J. Trump, as well as his campaign and advisors, to intimidate and discourage minority voters from voting in the 2016 Presidential Election

Trump has falsely and repeatedly told his supporters that the November 8 election will be “rigged” based upon fabricated claims of voter fraud in “certain areas” or “certain sections” of key states. Unsurprisingly, those “certain areas” are exclusively communities in which large minority voting populations reside. Notwithstanding that no evidence of such fraud actually exists, Trump has encouraged his supporters to do whatever it takes to stop it—“You’ve got to get everybody to go out and watch…and when [I] say ‘watch,’ you know what I’m talking about, right?”—and has been actively organizing “election observers” to monitor polling stations in “certain areas.” Trump has even encouraged his “watchers” to act like vigilante law enforcement officers.

The lawsuit notes that one of Trump’s top advisers, Roger Stone, “was a key advisor to the 1981 campaign of former New Jersey Governor Thomas Kean, in which a ‘ballot security’ force wearing black armbands engaged in widespread voter intimidation in Newark, Camden, Paterson and other minority neighborhoods in the State, leading to this very action and the Consent Decree that Stone is helping to violate today.” The Huffington Post reported yesterday that Stone planned to send poll monitors to nine cities with large minority populations, using fake ID badges and to conduct fake exit polling.

“We have three major voter suppression operations under way,” a Trump senior official told Bloomberg today. According to Bloomberg, the campaign is trying to depress turnout among “idealistic white liberals, young women, and African Americans.” Though this sounds more like negative campaigning than actual suppression, it isn’t likely to help the RNC’s case in court.

As we’re seeing in states like North Carolina, the GOP is going to great lengths to make it harder for Democratic-leaning voters—including a 100-year-old woman—to cast a ballot.