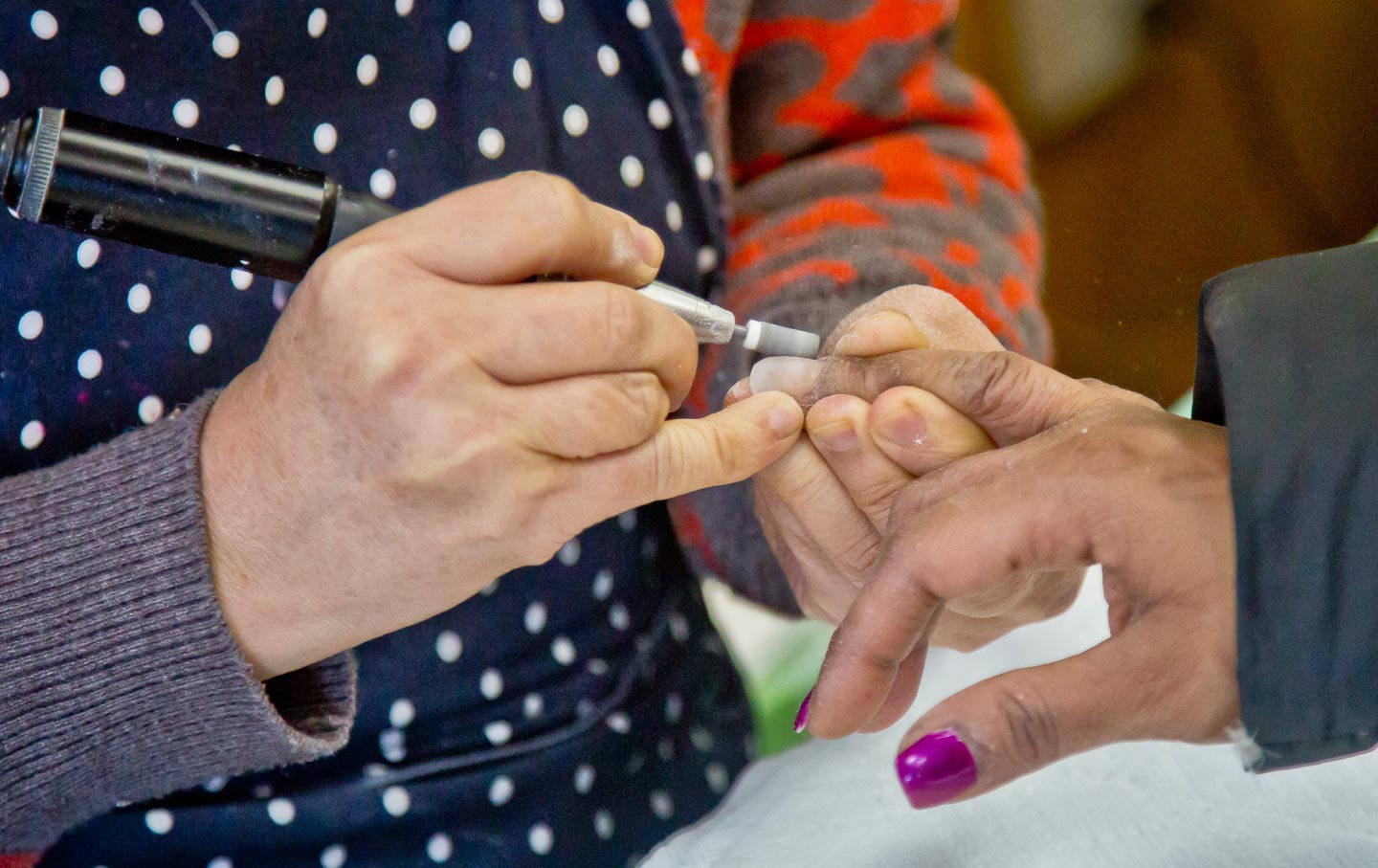 New policies to improve ventilation in the state’s thousands of nail salons is one modest measure by regulators to protect worker and consumer health in low-budget beauty shops notorious for toxic-chemical contamination. Yet business owners are protesting on the grounds that mandating cleaner air could stifle their American Dream.

The tensions among workers, employers, and the state reflect the challenges of labor enforcement in many under-regulated low-wage industries: not just in getting the right laws on the books, but engaging diverse communities and navigating local political fissures.

Since its launch last year, New York Governor Andrew Cuomo’s Exploited Workers Task Force has tightened labor oversight of low-wage jobs like construction and domestic work, and its targeted efforts toward nail salons could be a model for other states and cities that are trying to push higher minimum wages and enact other labor reforms in under-regulated service industries. The task force reported in July that it had over the past year investigated “3,000 claims, affecting more than 7,700 workers in 12 industries,” including 247 enforcement cases against restaurants, 491 investigations on farms, and 440 cases in construction—primarily dealing with issues like wage theft and occupational-safety violations—coupled with training and education efforts. Altogether, the Governor’s Office reports that last year “businesses were directed to pay a record $31.5 million in unpaid wages and damages to workers,” which is up from a total of $13.1 million paid out in 2007.

The task force’s flagship campaign has targeted the nail-salon industry, following an exposé by The New York Times revealing rampant labor exploitation and unhealthy conditions on the job. The state has investigated 480 claims involving nail-salon workers and “directed 143 nail salons to pay $2 million in unpaid wages and damages to 652 employees.” And some of the strongest backlash has come from nail-salon owners, many representing New York City’s rising Asian-American middle-class, who feel unfairly targeted.

“With the money we earn we could not buy another body.”

Still, the new ventilation standards shouldn’t be controversial. The rules are backed by an extensive research review citing hazardous contaminants commonly found in nail-care products, including toluene, formaldehyde, and other substances that “may be associated with various respiratory, musculoskeletal, and neuropsychological symptoms” and reproductive-health issues. The state’s requirements are based on established industry standards, including both ventilation equipment and personal respiratory masks.

The standards actually mirror those already in place in San Francisco, where a community-based “healthy nail salon” program has for years been ramping up health protections, with strong support from both workers and employers in the largely Vietnamese-owned shops.

An industry group recently staged a protest at New York Times headquarters, condemning journalist Sarah Maslin Nir for supposedly maligning the immigrant business owners. They claimed the ventilation requirements were too stringent (despite a five-year timetable to comply), and that harsh regulations would devastate many “mom-and-pop” salons. They are backed by Queens Assembly representative Ron Kim, who has publicly vowed to “oppose punitive measures and unreachable mandates that will inevitably bankrupt hardworking small businesses.”

(Cuomo’s office states that the industry continues to flourish despite the past year of crackdowns, showing that “New York can recognize that a chemical is dangerous without harming small businesses.”)

But employers are bristling at public backlash that goes beyond state regulators. Since the Times’s reporting, workers and labor advocates have mobilized to demand decent working conditions in the spas where immigrant women work for poverty wages pamper hands and feet amid noxious fumes. The mostly of Asian and Latino workers have also pushed grassroots “know your rights” programs in their communities. A niche sector has even cropped up featuring higher-end salons that offer healthier products and “ethical manicures.”

Workers campaigning with the New York Committee for Occupational Safety and Health (NYCOSH),  Adhikaar and other community groups issued a statement of opposition to the employers’ protests, stressing that the new regulations were a key step in making their workplaces more equitable. Anjana, a nail salon worker in Manhattan, stated: “If we are in a healthy environment, we can give our 100 percent at work and it will be better for the customer as well….If I am sick, is it good for the customers?”

According to NYCOSH Executive Director Charlene Obenauer: “Common health and safety violations include re-using tools that should be disposable, not providing workers with access to gloves, or having un-licensed workers employed at a salon. These kinds of violations are almost negligible in terms of cost, especially when [you] compare the cost of compliance with the cost of being fined.”

The state’s task force is pioneering a more comprehensive model of worker protection, Obernaer adds, by “looking at the intersection between public health and worker health.” This approach in turn “innovatively gets around federal exemption issues,” since federal authorities typically regulate workplace health and safety issues, but state regulators can tackle interconnected forms of labor exploitation tied to public health. They are now strengthening regulations on the state’s dry cleaners and car washes, sectors that, like nail salons, also center around smaller shop owners and low-wage immigrant workforces.

So both labor strife and employer pushback could rise as regulatory efforts expand. But despite the rhetoric in defense of humble “mom-and-pop shops,” it’s precisely these employers who need to be reined in. While they may appeal to public sympathies as immigrant strivers, it’s the exploited workers who deserve solidarity above all.

Our economy is rife with big-box retailers and global multinationals, but the fact that some abusive low-wage businesses reflect New York’s humbler middle-class economic strata does not exempt employers from responsibilities to treat their workers justly. Exploitative hierarchies can exist within and across immigrant groups or communities of color.

New York’s convoluted class politics notwithstanding, the singular struggle facing the nail salon industry now is straightforward: making workplaces a safe place to breathe for everyone. Manhattan nail-salon worker Arceli even made a clear business case for her health at work: “We’re killing ourselves. This is why we need this law to protect us. With the money we earn we could not buy another body.”

No job is worth any worker’s life, especially not when the price of protection simply means paying the full cost of a cheap manicure.