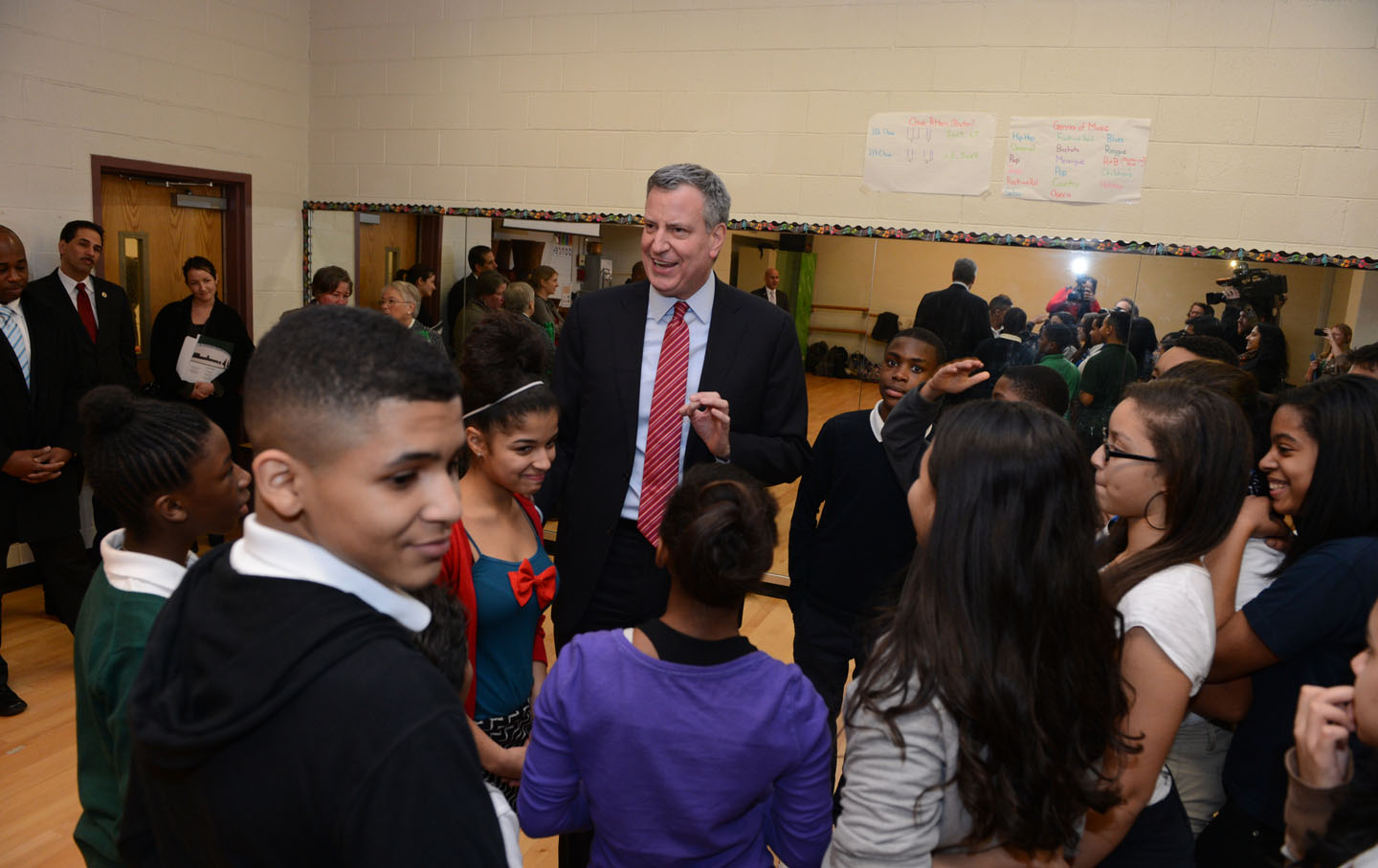 The election of Bill de Blasio as mayor of New York City raised the hopes and expectations of progressives throughout the country. This was especially the case among those who believed that he would develop a progressive vision and approach to managing the city’s public schools. After 12 years of corporate-style “reform” under his predecessor, Michael Bloomberg—an experiment that became the model for several other cities across the country—many in the five boroughs and elsewhere anxiously waited to see whether de Blasio could lead the way in creating a progressive alternative.

In some important respects, he has delivered. Within his first year in office, the mayor significantly expanded access to preschool for children in the city, creating more than 26,000 full-time pre-K slots. (Though many of the preschools are nowhere close to “high quality,” he still deserves credit for expanding access to such a considerable extent.) In his second year, he has pledged to enact a new approach to help struggling schools and to significantly expand the number of community schools—which provide a range of services, including health, nutrition, and case management—to relieve some of the burdens related to poverty. The mayor has dedicated $150 million to support this effort, and while some have questioned his ability to implement such an ambitious initiative quickly and effectively, few question whether it is needed. Finally, de Blasio has made peace and settled contracts with the city’s major labor unions, including the United Federation of Teachers, which he has embraced as a partner in most of the important decisions facing the school system.

But as he moves deeper into his term, de Blasio will no longer be able to lead by initiative alone. He needs to provide a well-articulated rationale for his different approach to managing schools, and he needs this so that he can mobilize his base—parents, teachers, and progressives generally—to support him in the fight to save public education. It will not be easy.

Over the last decade, a national coalition of education “reform­ers”­—including the Gates, Walton Family, and Broad foundations; Democrats for Education Reform; hedge-fund leaders and business CEOs; and a bipartisan collection of prominent politicians (Jeb Bush, Chris Christie, and Barack Obama, just to name a few)—has embraced a distinct agenda: expand the number of charter schools, use high-stakes testing to evaluate teachers, and embrace the standards known as Common Core. In New York, this coalition has already won victories against the mayor, thanks in part to the support of the state’s governor, Andrew Cuomo.

At the end of the state’s legislative session this past June, in a gesture that was widely seen as a slap in the face for de Blasio, the mayor was given only a year to continue his control of the city’s schools. (Under the current system, the mayor—rather than an elected school board—has the power to make decisions concerning the management of public schools.) While de Blasio may ultimately be granted more time, it has become increasingly clear that unless he is able to inspire his base to defend his education policies, he will continue to be thwarted. And the most effective way for the mayor to inspire his base is to put forward a coherent and compelling progressive vision for education.

This vision, which de Blasio should begin outlining right away, must be at once aspirational and pragmatic, civic and economic. Tapping deep into the mayor’s goal of reducing inequality, it should explain why a strong system of public education is vital to residents of the city, whether or not they have children in the schools, at the same time that it presents a persuasive strategy for addressing the school system’s many problems. It should redefine, through a set of bold yet basic ideals, what a quality education is, and it should anchor those ideals in an ambitious agenda that de Blasio can begin implementing now.

At a minimum, this agenda should do the following:

§ Address the overwhelming segregation of the public schools by both race and class. Last year, on the 60th anniversary of the Supreme Court’s Brown v. Board of Education decision, the Civil Rights Project at the University of California, Los Angeles, released a report showing that New York City schools were among the most segregated in the nation. Surprisingly, neither the mayor nor his schools chancellor, Carmen Fariña, commented on the report. While the city’s stark residential segregation makes a solution to this problem difficult, the rapid gentrification occurring in some areas makes it possible to use strategies like magnet schools, which have proved effective elsewhere, to create diverse, high-quality schools. The mayor could also petition to have the enrollment boundaries of some districts modified in order to increase diversity.

§ Move beyond a narrow focus on school improvement to create high-quality schools in the poorest neighborhoods. While there is evidence that the small high schools created during the Bloomberg years were better than the large schools they replaced, the city’s poorest neighborhoods still have a dearth of good schools. According to a recent report by the Center for New York City Affairs at the New School, nearly four in 10 city high schools do not offer algebra II, physics, or chemistry, and a 2012 Schott Foundation report showed that only 18 per­cent of the city’s black students and 16 percent of its Latino students were enrolled in high-performing schools. Rather than simply tinkering with troubled schools, the mayor must go further in building strong, high-quality schools that can expand the educational opportunities available to low-income students.

§ Articulate an appropriate role for charter schools. In all likelihood, charter schools are here to stay, so rather than attempting to limit their growth, de Blasio should push for greater accountability in how public funds are used; he should also call for parents to have explicit rights in decision-making, and for fairness for charter-school teachers, who are often overworked. In addition, the mayor could insist that new charters be located in the most disadvantaged neighborhoods and serve their fair share of high-need populations (for instance, English-language learners, the homeless, and formerly incarcerated youth).

§ Work with the teachers union to devise a viable and effective evaluation system. It is not enough for the mayor to state his opposition to rating teachers by a formula that includes student test scores. He must offer an alternative approach that ensures that teachers will be evaluated fairly and removed expeditiously (even when they have tenure) if they are unfit to work in the city’s classrooms. Such a proposal should also include provisions for attracting and retaining highly qualified teachers in struggling schools.

§ Adopt a meaningful role for parents. One of the main criticisms of the Bloomberg administration was that it cut parents out of key decisions related to school governance. Thus far, de Blasio has done nothing to address this issue. He should articulate a strategy for increasing parental involvement in governance, with the goal of making schools more responsive to the parents and neighborhoods they serve.

§ Disrupt the school-to-prison pipeline. Several recent reports have shown that the punitive discipline policies used by many of the city’s schools have contributed to large numbers of the most disadvantaged students being suspended or even arrested for minor offenses committed in school. Many of these unsupervised students end up getting in trouble with the law and become ensnared in the juvenile-corrections system. The mayor has an opportunity to show that schools can be kept safe and orderly by coordinating services from other city departments, such as the departments of Health and of Youth and Community Development. He can also provide additional funds for counselors and social workers so that schools have the resources to address factors that frequently contribute to discipline problems.

This is by no means an exhaustive list, but it could serve as the foundation for a coherent vision and strategy. The nation is in the midst of a battle over the future of public education. The stakes are high because powerful forces are deter­mined to dismantle this system.

Despite their flaws, public schools continue to be more accessible and stable than other institutions, and they offer hope and opportunity to millions of children across the country. Bill de Blasio has the opportunity to play a leading role in revitalizing and sustaining our schools. Let’s hope that he will seize it.