Utopias are defined as much by what they exclude as by their promises of plenitude. Plato dreamed of an ideal republic free of pestilent poets. The editors of The New York Times, more mundanely but equally tellingly, aspire to a newspaper that employs no cartoonists. In the wake of a controversy over the international edition of the Times running a cartoon of Benjamin Netanyahu that was widely condemned as anti-Semitic, the newspaper severed its relationship with the syndicate that supplied the offending image and now has let go of the services of two in-house cartoonists, Patrick Chappatte and Heng Kim Song.1

Speaking for many in his profession, Joel Pett, a Pulitzer Prize–winning editorial cartoonist for Kentucky’s Lexington Herald-Leader, decried the decision as “chickenshit and cowardly.” More politely, CNN’s Jake Tapper told The Daily Beast that this was “just one more nail in the coffin of what is a struggling art form, given how corporate America has taken over local newspapers and gutted the industry.”2

It’s undeniable that editorial cartooning, even more than journalism as a whole, is in crisis. A 2012 report by the Herblock Foundation found that there were fewer than 40 editorial cartoonists with newspaper-staff jobs in America, a steep decline from more than 2,000 such positions in the beginning of the 20th century. The situation has gotten only more dire since that report, with the high-profile firing of Rob Rogers from the Pittsburgh Post-Gazette for penning anti-Trump cartoons. Newspaper editorial cartooning is well on the path to extinction, a dire end for a vital art that has been inextricable from modern political protest.3

Times editorial-page editor James Bennet, also speaking to The Daily Beast, denies that the move was an outgrowth of the Netanyahu cartoon (although, inconsistently, he admits that canceling the subscription service sped up the decision to let go of Chappatte and Heng). Bennet maintains that he’s been thinking of axing cartoons from the paper for more than a year. If so, that makes Bennet and the Times look worse, since this was not an individual act of poltroonery but a more systematic aversion to visual satire. In recent years, other newspapers have fired cartoonists for economic reasons or because they did work that offended readers. But the Times (contra President Trump) isn’t failing economically. Nor did Chappatte and Heng do offensive work. They were fired simply because Times editors have an antipathy to editorial cartooning.4 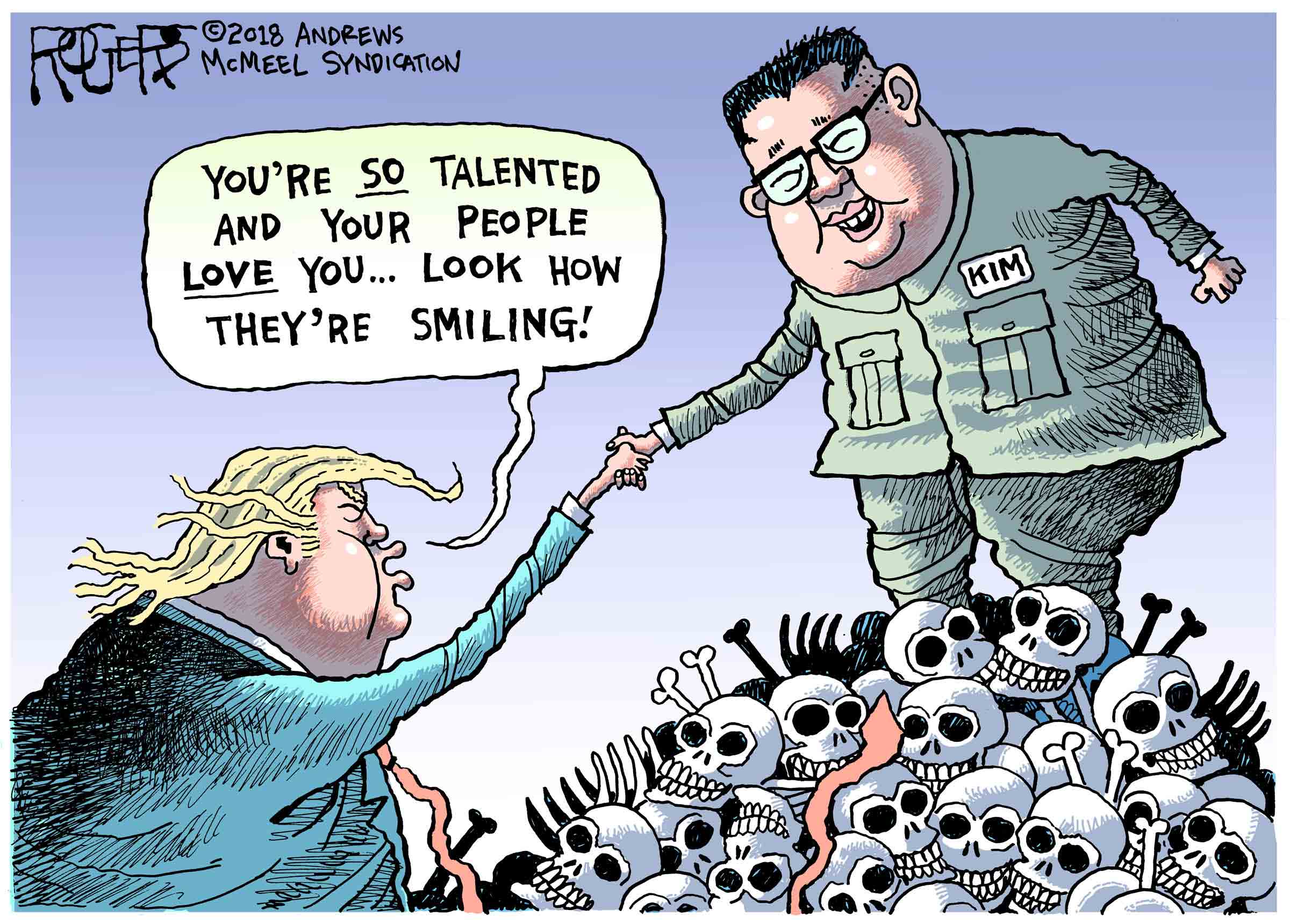 Comic Book Catharsis: A Q&A With Brian Fies on His Powerful Graphic Novel About California Wildfires

In truth, the Times has long viewed editorial cartoons with sniffy disdain. For most of its existence, the Times, along with The Wall Street Journal, was one of the few newspapers that ran no cartoons at all. In the golden age of political cartooning, the St. Louis Post-Dispatch had Bill Mauldin, The Washington Post had Herblock, The Village Voice had Jules Feiffer, and The New York Times had nobody.5

The fired Patrick Chappatte recalls that in 1995 an art director at the Times told him, “We never had political cartoons and we will never have any.” Chappatte sneaked into the Times through the back door, in the international edition. There was a brief period where even the domestic Times carried cartoons, but that ended a year ago.6

If the Times has a cartoon allergy, this is partly a matter of class. As an upscale newspaper, the Times prefers to present itself as objective and above the fray. By contrast, the publishers who have done the most to promote cartooning of all sorts, William Randolph Hearst and Joseph Pulitzer, were media ruffians, guilty of “yellow journalism” and exciting plebeian anger. As Bennet admits, the bluntness of cartoons goes against his own sensibility. It is revealing that Bennet singled out for praise the Pulitzer Prize–winning stories in comics form about Syrian refugees that Jake Halperin and Michael Sloan did for the Times. These are excellent works of reported cartooning (in the tradition of Joe Sacco’s work), rather than satire.7

Bennet’s sensibility is resolutely centrist. His op-ed page has been characterized by a nostalgia for pre-Trumpian bipartisanship, with an extra dollop of love always given to Never Trump Republicans. It’s hardly surprising that someone as committed to elite concord as Bennet would be so uncomfortable with editorial cartoons, an art form that at its best is agitational, subversive, and nose-tweaking.8

As former Nation publisher Victor Navasky notes in his 2013 book The Art of Controversy, editorial cartoons have power to upset people that words rarely match. As a visual form, cartoons travel at the speed of light, whereas a speech travels at the speed of sound and written words are slowed down by the effort of the eye to riddle them out. As you plod word by word through this sentence, you can’t untangle the full meaning until you reach the end. By contrast, a cartoon hits you like a punch in the eye.9 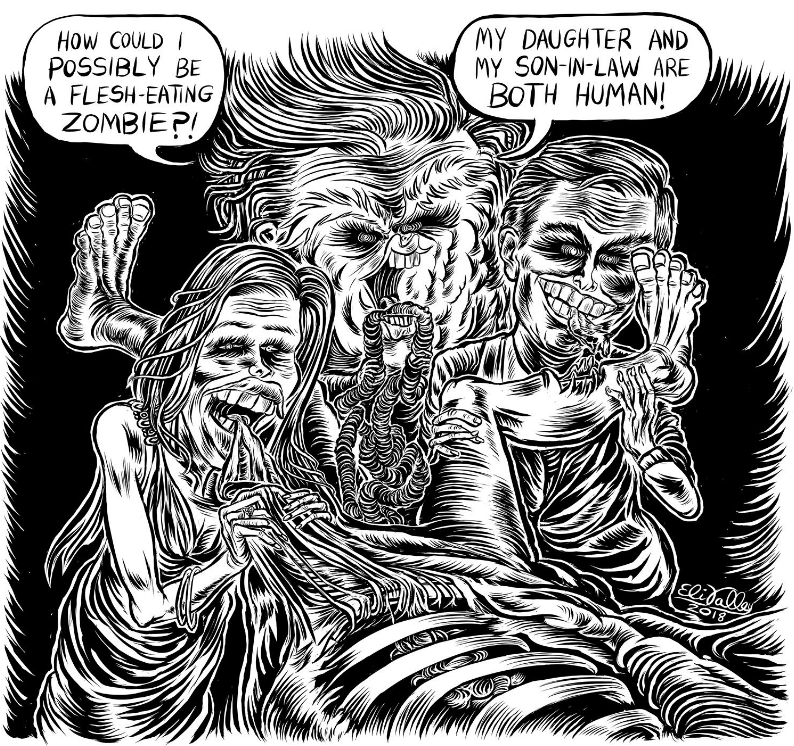 The element of caricature inherent in cartoons makes them even more dangerous. In intent, a cartoon is closer to a burnt effigy or a voodoo doll than it is to a reasoned essay. The goal is to wound—and that purpose is often achieved. Navasky quotes Napoleon as lamenting that the deft drawings of James Gillray “did more than all the armies of Europe to bring me down.” King Louis Philippe jailed the cartoonist Honoré Daumier, with the French government claiming that while “a pamphlet is no more than a violation of opinion, a caricature amounts to an act of violence.” Hitler raved and frothed at David Low’s cartoons, earning Low a place on the hit list of those to be assassinated after the conquest of Britain was achieved.10

Poor cartoonists! They have to fear not just the prissiness of a James Bennet but also the wrath of tyrants. These days, the steep decline of newspapers offers another threat, that of unemployment. Yet the impulse to deploy images in the service of politics continues, even if staff jobs are scarce. A new generation of alternative cartoonists have emerged who are most often to be found online. Distinguished names include Matt Bors, Tom Tomorrow, Eli Valley, Pia Guerra, Matt Lubchansky, Ruben Bolling, Kasia Babis, and Jen Sorensen. The most exciting such work can be found on sites like The Nib and on The Nation’s OppArt page.11