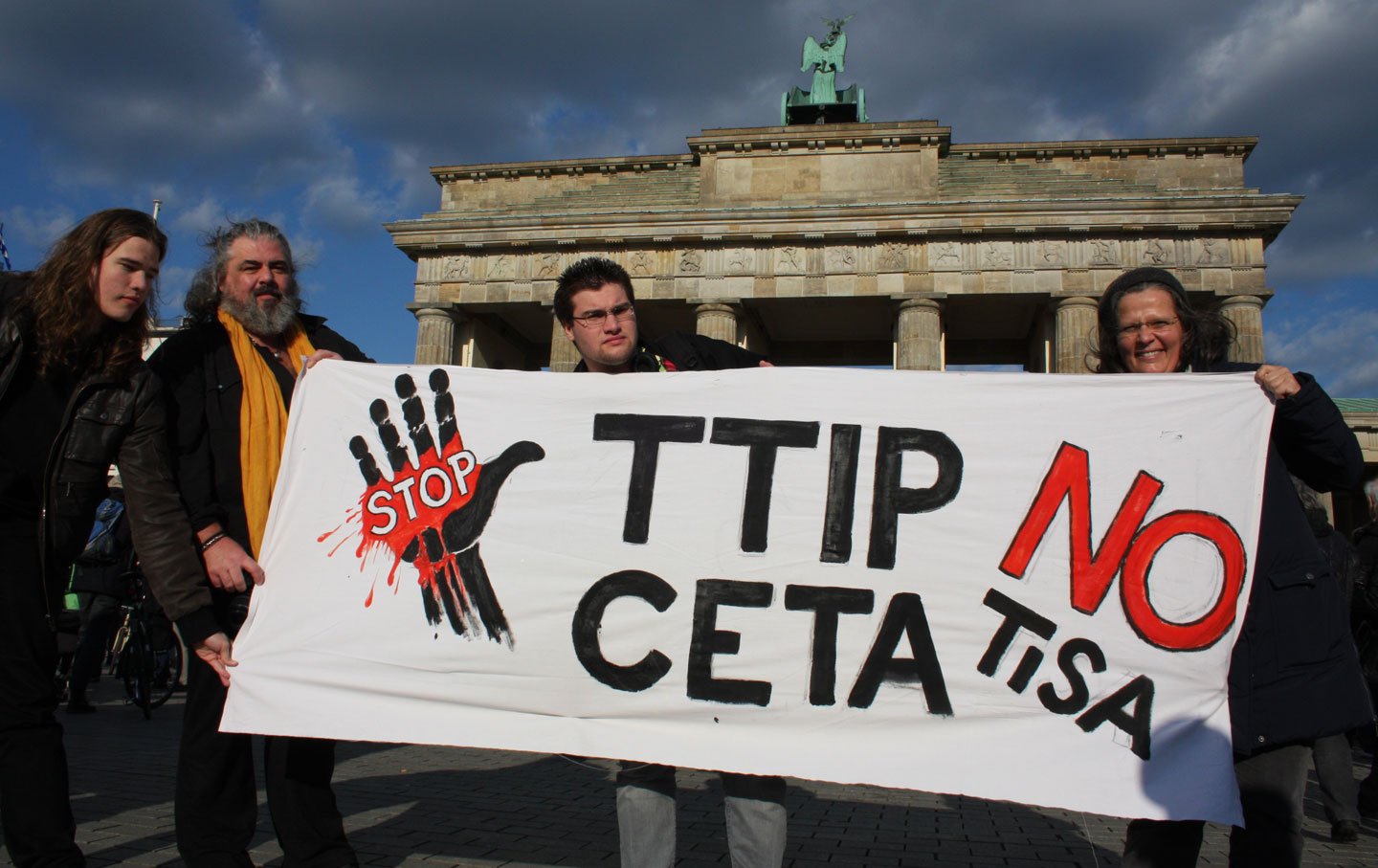 A group of protesters in Berlin demonstrate against the TiSA and TTIP free trade agreements. (Cornelia Reetz/CC BY-NC 2.0)

You might have thought the prospects for an immigration reform bill were dead on Capitol Hill, but elsewhere in Washington, policymakers could soon retool the immigration system through a different legislative pipeline: an obscure trade deal that treats workers as global commodities.

The Trade in Services Agreement, or “TiSA,” is being drafted up as a set of commercial rules that would shift labor migration by deregulating the global service economy.

Though the deal is still in its preliminary stages, a draft just exposed by WikiLeaks indicates that for certain professionals, the deal would direct countries to “take market access and national treatment commitments for intra-corporate transferees, business visitors and categories delinked from commercial presence: contractual service suppliers and independent professionals.”

In plain English, that means the trade rules would “liberalize” the importation of professional and service workers from a huge range of sectors. Like the Trans-Pacific Partnership, TiSA could roll back regulations on, for example, importing a programmer from a company’s Mumbai branch or transferring a bookkeeper to handle overseas accounts. The 38 designated job categories include: Building work, tour guides, hotel and restaurant service workers, computer hardware technicians, and midwives and nurses. Advocates fear this could dramatically broaden the use of unregulated foreign workers in US companies, and undermine already-weak safeguards against the exploitation of immigrants in service fields.

While it’s unclear how much this might apply to US companies if TiSA is ultimately adopted, Daniel Costa at the think tank EPI says the “Movement of Natural Persons” provisions would likely apply to two multi-year “professional” visas, the L-1, for transferring executive, managerial or special “knowledge” workers within a multinational; and the B-1 for “business visitors” temporarily in the US to, for instance, attend a conference.

Under TiSA, writes Costa, companies could more freely use certain visa-based workers. They might then avoid standard “guestworker” rules that require companies to “advertise jobs to U.S. workers, or to hire U.S. workers if they were equally or better qualified for job openings in their own country.”

Migrant labor abuse is obviously nothing new in the US. But some fear TiSA could do to “white collar” service jobs what NAFTA did to manufacturing: dismantle legal restrictions on exploitation of both material resources and workers.

Current safeguards on immigrant labor programs are designed not just for “protectionism” but to prevent companies from manipulating guest-workers to avoid fair labor standards like wage-and-hour rules (typically more loosely regulated for visa-based workers). But even now, as with the more common labor visas for tech workers, enforcement is anemic. Plus these special business visas do not cap the number of “human resources” companies can ship around.

Costa notes that a trade protocol known as General Agreement on Trade and Tariffs already exempts intra-company transfers from the standard labor market tests. US computer technicians have reportedly seen their bosses use the L-1 to bring in—and even force them to train—their “foreign replacements,” and had to effectively train the worker hired to do their job for less. Immigration authorities have cracked down on tech companies that have avoided standard “skilled worker” visa quotas under the H-1B program, and imported L-1 workers to “perform jobs… that were otherwise required to be performed by U.S. citizens or required legitimate H-1B visa holders.”

Besides the special business visas, the TiSA rules appear to cover “independent” contractors—service providers not formally employed by the US company. Costa says corporations might use TiSA to exploit B-1 workers to gain “a competitive advantage by being able to pay the wages the worker earns in the home country, which will be in many cases lower than what a US worker would earn for the same job.”

If the TiSA becomes yet another gray area for labor migration policy, Costa speculates, “potentially hundreds of thousands of workers could enter the United States every year to work in these 38 sectors.”

Following the TiSA leak, in an opposition statement by a global coalition of rights groups, Tony Salvador, a labor lawyer with the Philippines-based advocacy group IDEALS, warned that in any trade deal, “the host country should maintain its prerogative to pass and implement immigration and national security laws, and apply them to both migrant workers and foreign service suppliers,” to keep corporations from using regulatory arbitrage to avoid human rights conventions.

TiSA might also enable corporations to sue governments through investor-state tribunals. Under NAFTA and other trade agreements, companies have used these corporate courts to seek to strike down public interest regulations, like environmental or labor laws, for supposedly impinging on investors’ “rights” to profit. According to Costa, a country like India could potentially sue the US government “for something as simple as raising visa fees” or imposing a minimum wage.

Currently it’s unclear how exactly the US might adopt the TiSA; generally, the government has some discretion to make exemptions to mitigate the economic impact of such a deal. But the bitter debate on TPP reveals, the consequences of borderlessness seldom benefit the least powerful. (Especially if your trade partners are serial human rights violators and pay workers a fraction of average US wages.)

And there’s more free trade lurking on the Hill. Trade ministers have been drafting a cousin of the TPP, Transatlantic Trade and Investment Partnership (TTIP), to bring on another deregulatory surge on sectors like financial management and even public healthcare—penetrating fields once seen as relatively safe from outsourcing.

Congress meanwhile has been reassuring anti-TPP activists that there will be adequate safeguards built into the deal, and recently added a caveat to the fast-track bill ensuring that it would not alter federal immigration policy. But however the White House might use its executive power to grease through these giant economic pacts, trade liberalization inevitably growing corporate power at the expense of democracy. If workers are recast as “service suppliers,” companies might be “freer” to trade their labor for profits in the global marketplace, but their rights are simply traded away.