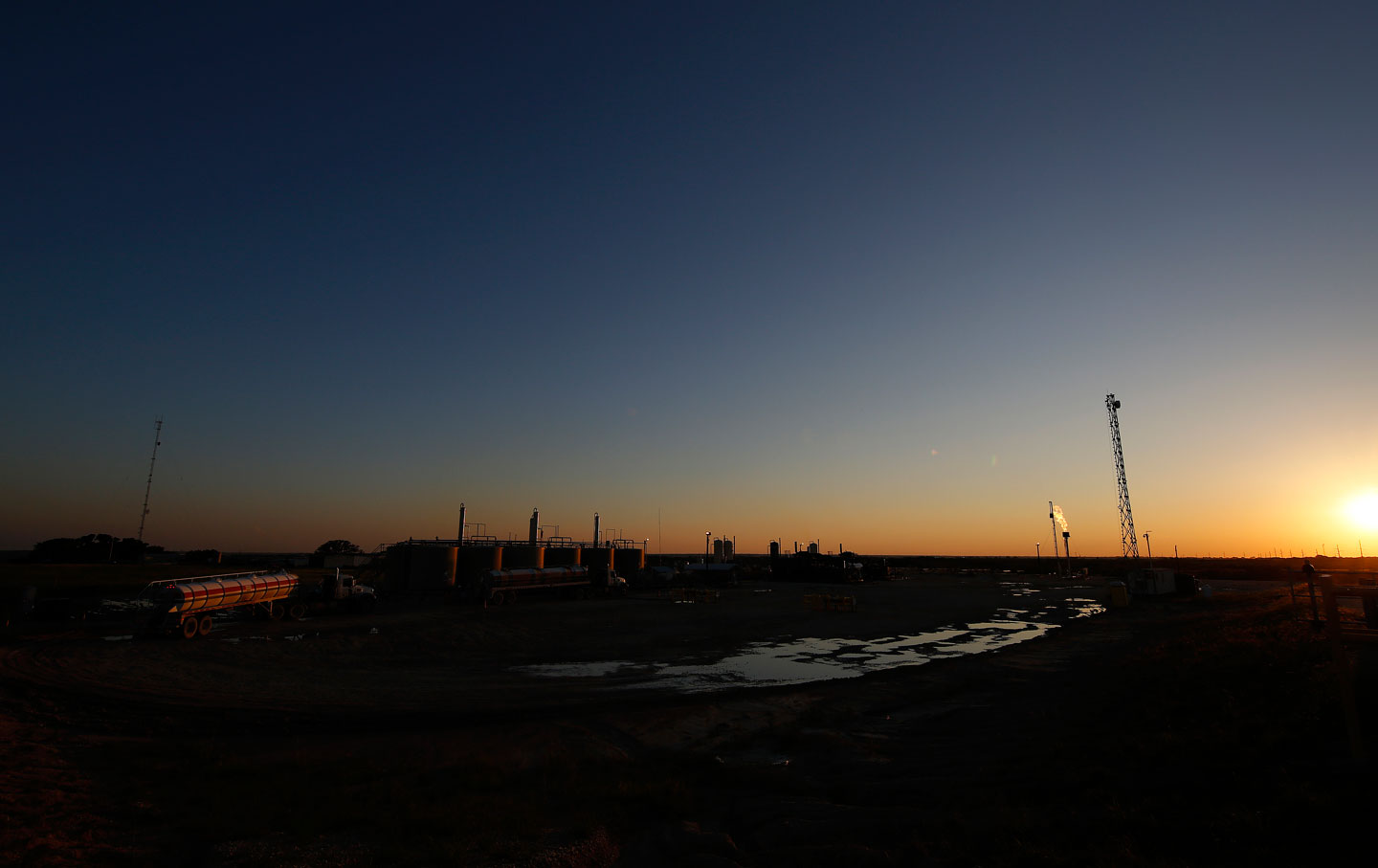 About 386 million years ago, Pennsylvania received a great gift—or, depending on your point of view, a curse: the Marcellus Shale, a formation of black rock and limestone containing vast reserves of natural gas. The formation stretches from New York through the Appalachian Basin, but it’s Pennsylvania that has played host to the most intensive plundering of those reserves since the mid-2000s, when energy companies began to use hydraulic fracturing to free up the gas trapped a mile below the surface of the earth.

Pennsylvania will receive another dubious benefaction next week, when Philadelphia hosts the Democratic National Convention. Considering the party’s division over fracking and the shale gas revolution it enabled, it’s a provocative setting. The Obama administration, along with Hillary Clinton as secretary of state and other prominent Democrats, have promoted natural gas as beneficial for both the climate and the economy. But communities situated near heavy fracking activity have long reported adverse environmental and health impacts. And new research on the scale of leaks of methane—a greenhouse gas even more potent than carbon dioxide, in terms of its ability to trap heat in the atmosphere—from natural gas wells and pipelines has intensified calls from climate activists to end the practice. The Democratic platform draft walks a strained line between these two camps, offering support for local moratoriums and more federal oversight, while stopping short of calling for a broader ban.

Now there’s new evidence suggesting the drilling technique may harm human health. On Monday, researchers at the Johns Hopkins Bloomberg School of Public Health released a study of the medical records of more than 35,000 people with asthma who lived above the Marcellus Formation between 2005 and 2012. Residents of areas with intense shale-gas activity faced “significantly higher odds” of having asthma attacks, the researchers found, even when taking into account factors like whether they smoked or lived near major roads. Though the study doesn’t trace an exact line of causality, the authors note that fracking has been linked to increases in air pollution, and stress and sleep deprivation from noisy equipment and bright lights, all of which can worsen asthma.

Larysa Dyrszka, a doctor and co-founder of Concerned Health Professionals of New York, said during a press call Tuesday that there have been more than 480 studies linking adverse health outcomes to fracking, including higher rates of hospitalization near fracking hotspots. “I’ve grown increasingly concerned about the health effects of drilling and fracking, as more and more residents report the same symptoms, which include troubled breathing, nose bleeds, rashes and more,” she said. With the newest health study as ammunition, Dyrszka’s group will join a coalition of environmental organizations, labor unions, peace activists, and others in Philadelphia on Sunday for a “March for a Clean Energy Revolution,” calling for a fracking ban, among other things.

“There’s really not a fix to fracking,” said Barbara Gottlieb, who directs environment and health programs for the Washington group Physicians for Social Responsibility. Among the health risks she cited are ground level ozone, volatile organic compounds and carcinogens like benzene, and water contamination. “We certainly also support measures that would require oil and gas companies to reduce leaks of methane, but the long-term solution, to put it in medical terms, is prevention. We need to stop extracting natural gas and work as quickly as is feasible to ensure a transition for the energy system,” she said.

Groups like 350 Action are planning other actions around fracking, but they’re not making details public yet. “Thus far we’ve focused on trying to push the way climate is understood as a priority in this election, and to push Democrats much further to the left. That means stronger action on keeping fossil fuels in the ground, holding companies accountable for fraud and deception on climate change, and the need to advocate for a really aggressive transition to clean energy,” said May Boeve, 350 Action’s executive director. “People in the climate movement are recognizing that it’s been an important couple of years to build power, but the political process has been much much slower to react and the [climate] impacts are happening very fast.”

On Tuesday, California’s Alameda County became the fifth in the state to ban fracking; others will put the question to voters in November. New York, Maryland, and Vermont have enacted state-wide moratoriums. That the Democratic Party is offering a show of support for this local organizing against fracking is significant. Still, the broader point made by the “ban fracking” movement is less about the extraction technique itself than the foolishness, from a climate perspective, of getting locked in to natural gas as a primary source of energy. Proponents of natural gas on the left claim it’s merely a transition fuel. But if we’ve learned anything from oil and coal, it’s that it is hard to abandon an energy source once it’s widely used, and profitable. Just yesterday, Shell’s chief executive officer, Ben van Beurden, noted that the oil giant is becoming “more a gas company than an oil company.” If van Beurden has his way, Bloomberg reported, natural gas is “‘not just going to be a bridge’ but a lucrative part of the energy mix indefinitely.” Based on the most recent science on methane leaks, that could be very bad news for the planet.