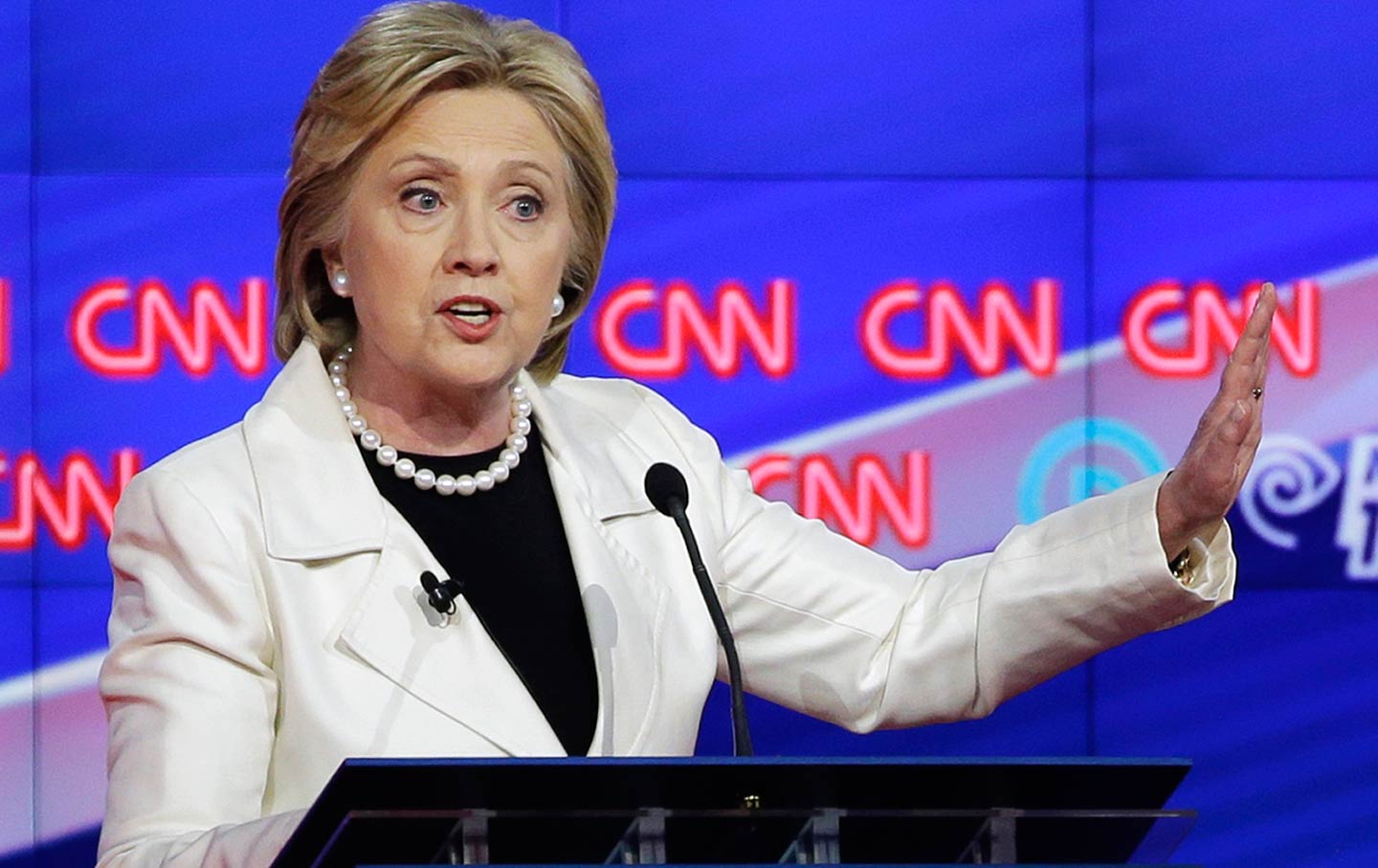 Hillary Clinton missed a big opportunity on Thursday, offered to her during the Democratic debate in Brooklyn by moderator Errol Louis. Louis asked her about her record on fracking for natural gas, a technique she promoted around the world as secretary of state. Under pressure from environmental activists, Clinton has lately tempered her enthusiasm, and in March she laid out several conditions she would require natural-gas producers to meet before they could frack. What Louis wanted to know was, “Why have you changed your view on fracking?”

Clinton could have pointed out that, since her time in the State Department, the science on the climate implications of natural-gas production has become more clear. She could have mentioned the Aliso Canyon disaster, which has spewed more than 100,000 tons of heat-trapping methane into the atmosphere, or new satellite data indicating a massive spike in methane emissions globally. She could have discussed the growing opposition from communities on the front lines of fracking, which in 2014 pushed New York Governor Andrew Cuomo to ban the technique statewide. She would hardly be the first Democrat to “evolve” on the issue.

Clinton could even have put up an argument as to why a national ban, as advocated by Bernie Sanders and a coalition of major environmental and health groups, might not be a good idea. Sanders himself failed to explain, when pressed, why a fracking moratorium wouldn’t push us back towards coal. But Clinton chose to fall back on the description of natural gas as “a bridge” from fossil fuels to renewables, albeit one “we want to cross…as quickly as possible.” Then she pivoted to a critique of coal, arguing that the world still burns “too much” of it.

Clinton isn’t wrong on that point: While Big Coal continues its downward spiral in the United States—as illustrated by Peabody Energy’s filing for bankruptcy protection on Wednesday—it’s a different story internationally. For the last 15 years or so, other countries, particularly Asian nations, have been speedily building new power plants that are fed by coal, which is often the cheapest source of electricity. Over 2,000 new coal-fired facilities are planned worldwide, with more than 500 already under construction, reports Brad Plumer. Making sure these new facilities never go online—a task that demands alternative sources of energy be made available to poor countries—should be a priority in any serious climate platform. Still, the recent research indicates that reducing emissions by convincing the world to burn less coal isn’t enough if we don’t get get methane under control, too.

There’s a rather obvious problem with Clinton’s desire to cross the natural-gas bridge as quickly as possible: A sizable chunk of the Democratic establishment, and many of her supporters, are invested in making sure we’ll be reliant on fracked gas for a long time to come. Throughout his presidency President Obama has promoted it as both a climate and an economic savant, and a number of party insiders have gone to work for the industry. Among them is Obama’s former deputy assistant for energy and climate change, Heather Zichal, who took a $180,000-a-year post on the board of natural gas giant Cheniere Energy shortly after leaving the White House. Also working with Cheniere are Ankit Desai, who has worked for Joe Biden and John Kerry; former CIA director John Deutch, who chaired an advisory panel on fracking safety for Obama’s Energy Department; and Vicky Bailey, former Federal Energy Regulatory commissioner under Bill Clinton.

But environmental activists have moved the needle on fracked gas. The idea of a ban on fracking is not absurd any longer: New York has done it, and Maryland imposed a two-year moratorium last year. Clinton has said she supports those local decisions. In the Pennsylvania Senate race, two Democratic candidates have called for a fracking moratorium, while a third, Katy McGinty (who has been endorsed by Obama and the Democratic Senatorial Campaign Committee), has been forced to defend her record on fracking as secretary of Pennsylvania’s Department of Environmental Protection. California Governor Jerry Brown is facing heightened pressure to limit fracking in the wake of the massive Porter Ranch gas leak. Last month in Florida, activists helped to kill a bill that would have stopped towns from banning fracking operations. Democrats in Colorado have split recently over measures to allow more local control and allow residents to sue drillers for damage. Even Senator Sheldon Whitehouse, who was one of the first to publicly propose prosecuting oil companies like Big Tobacco for their role in spreading climate skepticism, has come under fire for supporting a proposed gas-fired power plant in Burrillville, Rhode Island.

“Referring to natural gas as a bridge fuel is no longer a defensible position, given the devastating effects of methane on our climate,” said Wenonah Hauter, the executive director of Food & Water Watch, in a statement following the debate. Activists are planning to push the issue of a fracking ban at the Democratic convention in Philadelphia. Going forward, the question for Clinton should be not why she shifted her position on fracking, but whether she can demonstrate that her proposals to make the practice safer would actually work. Is improving states’ “knowledge of local geology” really going to end the earthquakes that have been linked to fracking? Is there really a way to frack without endangering groundwater? Can regulation stem enough of the methane leaks, and quickly enough?