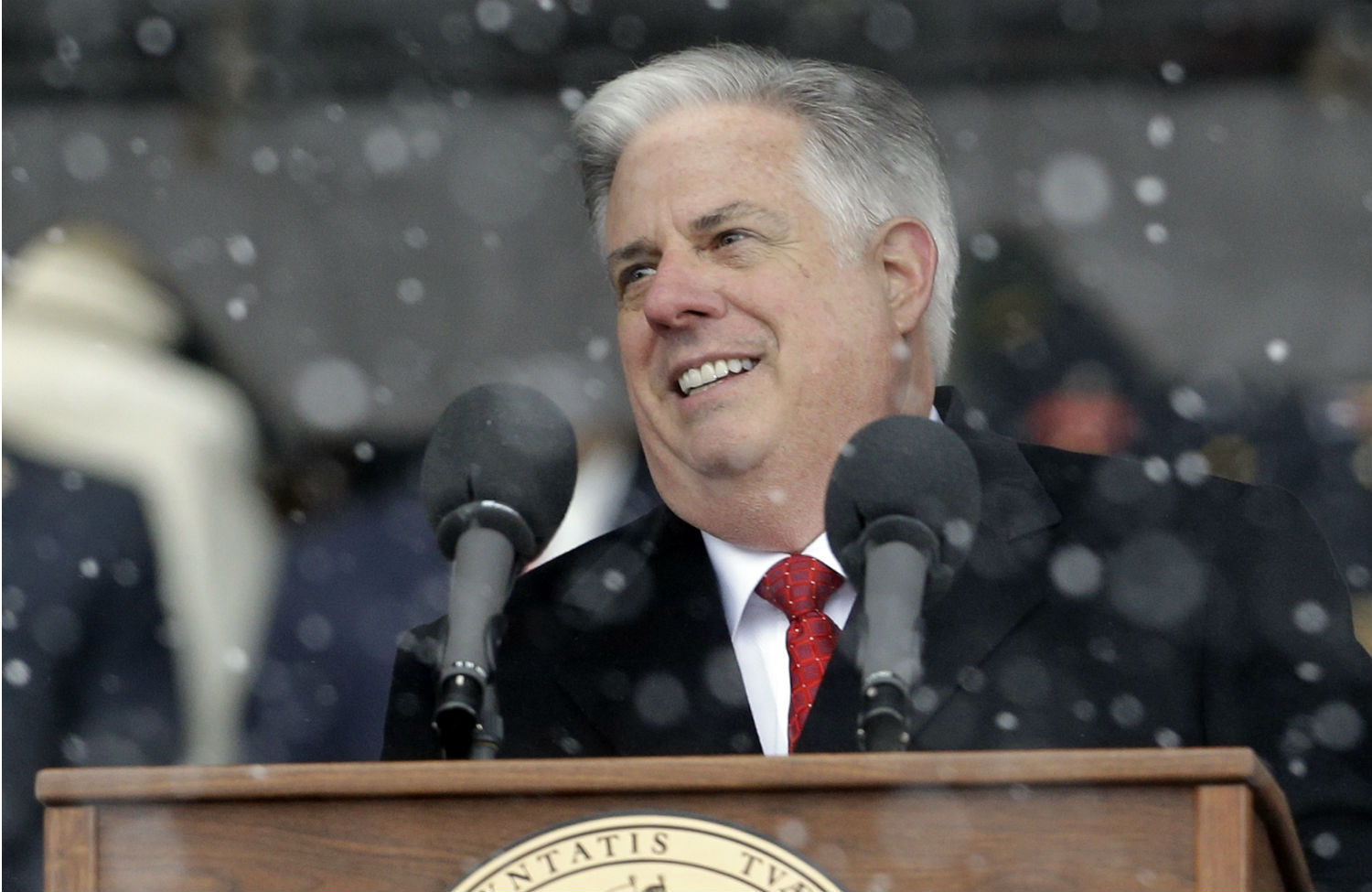 When Larry Hogan was elected governor of Maryland last fall, it easily ranked as the biggest surprise of the midterm elections. Even in a bad year for Democrats, a Republican who never previously held elected office was not supposed to triumph over a promising young Democrat in a state Obama won twice by twenty-six points.

The son of a former Congressman and owner of a large real-estate business, Hogan projected himself as fiscal conservative during his race against Lt. Governor Anthony Brown—but also a moderate. His preamble to running for governor was forming Change Maryland, a proudly “non-partisan grassroots organization.”

Hogan has a friendly everyman persona that has earned him some pretty favorable coverage in local papers. (Some recent headlines from the neighboring Washington Post: “Maryland Gov. Larry Hogan’s appeal to ‘middle ground’ could revive state GOP” and “Md. Gov. Larry Hogan, the happiest, sweatiest guy at the inaugural ball.”)

But Hogan’s first days in office are proving to be anything but moderate. Rather, a familiar storyline is playing out: the friendly Republican gubernatorial candidate suddenly becomes a hardline conservative governor.

After being introduced by New Jersey Chris Christie at his inauguration Wednesday as someone “who knows how to bring people together,” and after the VIP guests dined on shrimp scampi, crab cakes and grilled chicken, Hogan got to work: he immediately rescinded blockbuster environmental regulations on state coal plants and pollution of the Chesapeake Bay. He also called back regulations designed to protect LGBT Marylanders from healthcare and employment discrimination.

Hogan signaled more regulatory rollbacks are to come, and starting floating budget cuts that have troubled education and healthcare advocates along with state employees. The full budget isn’t out yet, but a Republican ally of Hogan in the state legislature told the Baltimore Sun, “Everyone is going to feel some pain, that’s my sneak preview.”

Hogan “delaying” the Chesapeake Bay protections was the most predictable move, though perhaps not with the speed and totality with which he did it. “We were quite disappointed, because it happened four hours after he was inaugurated,” Dawn Stoltzfus, coordinator of the Maryland Clean Agriculture Coalition, told The Nation. “It was shocking in that regard.”

The regulations restricted phosphorus pollution from the many farms adjacent to the Chesapeake Bay, a major source of pride—and economic output—in Maryland. The farms are rich in phosphorus from fertilizers and chicken feed that farmers spread on their land, and the runoff from these farms causes algae blooms in the bay and harms underwater plant and aquatic life, including the famous Maryland blue crabs, oysters and fish. It can create entire “dead zones” in the water, and the Chesapeake Bay Foundation conducted a study that found the state would lose $20 billion in economic growth by 2025 if it didn’t curtail the pollution.

Former Governor Martin O’Malley enacted the regulations to reduce the excessive agricultural use of phosphorus (after a few delays of his own, it should be noted), and considered the rules a major part of his environmental agenda.

Advocates weren’t quite sure how Hogan would try to blunt the rules, though they were sure he would try—he spoke out against the regulations during his campaign, and after he was elected Hogan hinted his incoming administration had “a few tricks up our sleeve” on phosphorus rules.

The trick ended up being a simple one: Hogan just canceled the regulations, in a fashion unprecedented in Maryland history. The rules had already undergone the required public comment period, and the Maryland Department of Agriculture signed a “Notice of Final Action” on January 16. The rules were supposed to be printed in the state register on Friday—but Hogan halted the publication. He essentially just stopped the presses on the rule. It is ostensibly “under review.”

A representative of the Maryland State Attorney General’s office wrote in a letter that Hogan’s move appeared to be legal, but that she could not predict how a court would see it. “I could find no Maryland case law or previous opinion of the Attorney General addressing the ability of an agency or the Governor to withdraw a notice of adoption after its submission to the [Division of State Documents] but before publication of the notice,” she wrote.

Hogan similarly rescinded a rule governing air pollution at the state’s coal-fired power plants. The rule was under construction for fifteen months, and even had the support of Raven Power, which operates coal plants in the state. It would have forced coal-fired plants to reduce emissions of nitrous oxides, which contribute to smog and poor air quality, by about half over the next four years.

Environment and public health advocates saw it as a crucial regulation; 5 million Marlyanders (86 percent of the population) live in areas classified by the EPA as unsafe to breathe because of smog. Baltimore has among the worst air quality of cities on the East Coast, and 28 percent of Baltimore school children report having asthma.

Hogan’s move caught the advocates off-guard. “It’s been a bit of a whirlwind the past few days,” said David Smedick, the Beyond Coal Campaign and Policy Representative of the Maryland Sierra Club. “When you do have that broad support for it, including the people who are operating these coal units, you are surprised by it.”

Smedick added that, to his knowledge, Hogan never talked about the coal-plant regulations during his campaign. The Nation wasn’t able to find any examples where he did.

These were just two of five regulations Hogan held up this week. Another delay outraged the state’s gay and lesbian community—particularly after Hogan preached an environment of “tolerance and respect” in his inaugural address. Hours later, he rescinded a regulation banning Medicaid providers from discriminating on the basis of sexual orientation and gender identity.

“To withdraw a regulation that prohibits discrimination in the provision of essential medical services, which also has no fiscal impact, seems contrary to the spirit of inclusiveness touted in his inauguration speech yesterday,” said Carrie Evans, executive director of Equality Maryland, in a statement. “We know that trans people in Maryland face discrimination when accessing health care and we should be working to ensure this doesn’t happen instead of overtly condoning it.”

Sounds good—but notably absent from that list is gender identity. The state legislature passed a landmark bill last year forbidding discrimination on the basis of gender identity, and by leaving out any mention of it, Hogan’s order seems to be conveying a message to state employees: never mind about that. (Hogan’s office did not immediately reply to a request for comment, though it should be noted the governor’s staff said the press office phones were not set up yet.)

It’s not just these regulations that are endangered; Hogan’s office told DelmarvaNow, “The governor has directed all agencies to begin a comprehensive review of all pending regulations.”

Finally, Hogan is sending some mixed, but still troubling, messages on the budget. Maryland’s budget is somewhat unique in that most of it is dictated by complicated formulas, and less than 20 percent is purely discretionary spending. The state also has a $700 million budget gap which needs to be closed.

Hogan said he will maintain a 2 percent cut to every state agency, initiated by O’Malley, and some Democratic lawmakers gave Hogan credit for not cutting deeper, and for largely leaving education funding intact.

But Medicaid advocates are already upset that Hogan plans to hold Medicaid provider rates despite an increase in costs and population, which amounts to a cut. Hogan is also treating a $156 million cost-of-living increase for state employees last year as a bonus—meaning, it won’t be back this year.

Hogan has not yet presented his full budget, but the Baltimore Sun editorialized Thursday that “it was impossible to avoid the sense that more shoes are left to drop.”

There’s a lot of time left in Hogan’s term—but if the next four years look like the first twenty-four hours, Maryland will be a very different state come 2019.