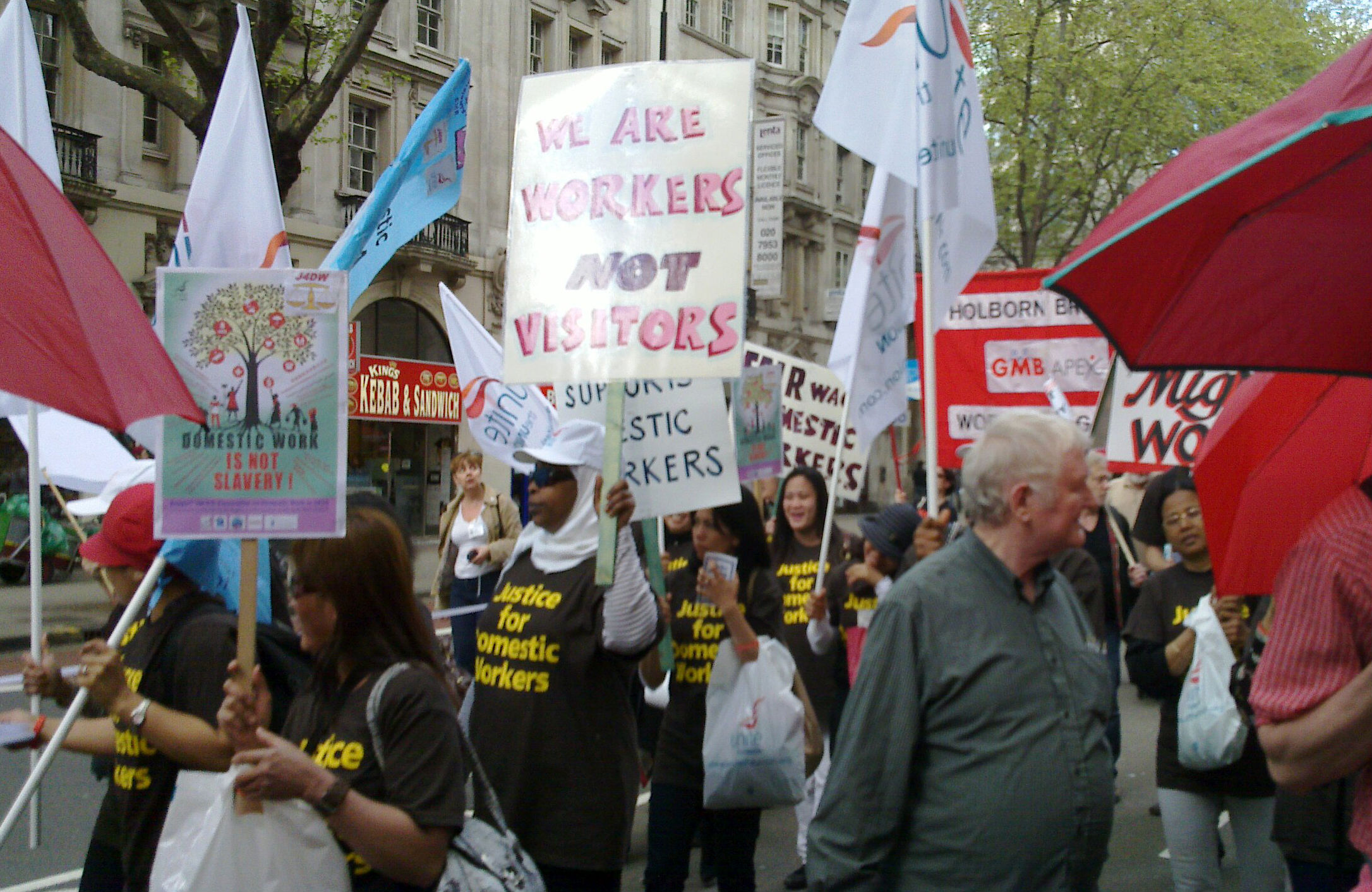 Domestic workers demand justice on the left and the international union of sex workers strikes with red umbrellas on the right in 2010. (CC/Charles Hutchins)

Last year, California Governor Jerry Brown signed into law a Domestic Workers Bill of Rights, guaranteeing overtime pay to employees—the vast majority of whom are women—who provide care in homes across the state. The organizing that led to the win was spearheaded by affiliates of the National Domestic Workers Alliance (NDWA), which has said this new law “will put millions of dollars in the pockets of immigrant women and women of color laboring as domestic workers.”

In her new book, Part of the Family? Nannies, Housekeepers, Caregivers and the Battle for Domestic Workers’ Rights (Ig Publishing), journalist Sheila Bapat explores how it came to be that an entire class of workers were excluded from basic labor protections. Through vivid storytelling and thorough research, Bapat exposes the working conditions and subjective practices that make policy change necessary. She explains what made victories possible in California, New York and Hawaii and what’s underway in Massachusetts, Illinois and other states where caregivers are organizing themselves and pushing lawmakers to recognize the value of their work.

I spoke with Bapat about her book and the movement.*

Dani McClain: What made you decide to focus your writing and reporting on women’s economic rights, and why write a book on organizing among domestic workers specifically?

Sheila Bapat: It really goes back to that old phrase “the personal is political.” I observed throughout my life how hard the women in my family work—cooking, caring for everyone in the household, cleaning up after everyone—and yet all of these women remained economically vulnerable while their husbands controlled the family’s wealth. As I grew older, I learned there is a whole field of study, feminist theory, that is focused on understanding why the very hard work of the domestic sphere is deemed unworthy of economic value. Women’s labor the world over is deemed unworthy of pay, and we continue to see this in wage gaps and wage discrimination across many sectors, as well as through the exclusion of domestic workers from basic labor protections. It is deeply troubling that caregiving work—the work that we purport to value most in conversations about the importance of family—is actually not a means of economic security for those who engage in it. And yet the domestic workers’ movement is, quite impressively, fighting this legacy. It seems impossible to uproot such deeply systemic trends, but that is exactly what domestic worker advocates are accomplishing through state legislative campaigns, direct representation of domestic workers, and other strategies that shine a light on how critical caregiving labor is. It is brilliant, triumphant activism that we should all be paying close attention to.

DM: You write that the exclusion of domestic workers from the protections most other workers get is part of the legacy of Jim Crow. How so?

SB: Our nation’s original fair wage legislation—the Fair Labor Standards Act (FSLA), passed in 1938—excluded domestic workers and agricultural workers—most of whom were African-American during that time. There is clear legislative history showing resistance from Southern lawmakers to the idea of allowing African-American workers to be on the same economic footing as white workers. FDR needed the support of Southerners to pass the FLSA. So there you have it: exclusions of domestic labor were built into our nation’s earliest fair wage laws. And we think the Affordable Care Act has problems!

DM: NDWA director Ai-jen Poo began working with domestic workers after first supporting survivors of domestic violence. What’s the connection, and how did it come up as you did your reporting for the book?

SB: This connection came up when I first interviewed Ai-jen Poo, in October 2012, in NDWA’s Manhattan office. What Ai-jen told me—that many survivors of domestic violence with whom she had worked over the course of her career were also domestic workers—deeply resonated with what I have learned from my personal experiences as well as my reading of various feminist theory: a woman’s economic status, and her economic independence, are deeply connected with whether she will be vulnerable to physical violence or abuse in her own home. By contrast, a woman’s economic power enables her to better care for herself, her own children and her parents.

DM: What are the key components of a strong domestic worker bill of rights?

SB: It is critical that domestic workers’ legislation state that all domestic workers’ are entitled to the state’s minimum wage and overtime. That way, when states enact wage hikes, they cannot exclude domestic workers. Sadly, some states that are raising their state minimum wages are still choosing to exclude domestic workers, like Delaware, Rhode Island and West Virginia. Beyond basic wage protections, I’d like to see, at the federal level, reform to diplomatic immunity. Currently, sitting diplomats are immune from civil or criminal prosecution even when there are allegations by their domestic workers of wage theft, mistreatment or even trafficking. This is policy that keeps workers—who are overwhelmingly women—deeply vulnerable to abuse. We recently saw CASA de Maryland bring a case for a Kenyan domestic worker who is alleging abuse at the hands of her employer, a foreign diplomat. It is critical that we reform diplomatic immunity to hold diplomats accountable for worker abuse that they commit.

DM: You’ve identified New York City as the birthplace of the domestic movement and you write about the win achieved at the state level there in 2010. Why was it harder to pass a law in California, a state widely viewed as progressive, than in New York?

SB: The first domestic workers’ legislation that the California legislature passed was in 2006. That was vetoed by Governor Arnold Schwarzenegger, who was not an advocate for workers’ rights and he was certainly was not interested in women’s rights by any stretch. However, even when we did elect a progressive governor, the journey in California was not easy for the domestic workers’ advocates. Governor Jerry Brown chose to veto very important legislation in 2012 that established overtime protections and other important protections that the book outlines. It’s hard to say why Governor Brown vetoed the 2012 legislation—some believe he was more focused on an education initiative that required more of his political capital, and others believe it may have been in response to concerns expressed by the disability rights community. In the end, I think it is still easy for legislators to write off protections for domestic workers that they may not write off for other groups of workers. We see in Oregon how hard it was for Representative Sara Gelser to convince her colleagues at the state legislature that nannies are doing real work that is deserving of overtime pay—Oregon’s legislation sadly failed last year. The belief that domestic workers are not engaging in “real work” persists and makes it easier to cut them out of economic protections that other workers enjoy.

DM: When workers organize to pass state protections, who typically lines up to oppose their efforts?

SB: The most troubling opposition we should be looking at right now comes from the “right to work” movement. We are currently waiting for the Supreme Court to rule on an important case called Harris v. Quinn—the decision should come down any day now—which would roll back collective bargaining rights of public sector employees. The plaintiff in the case, Pam Harris, is represented by the National Right to Work Legal Defense Foundation. If the Court rules in favor of Harris, it could deeply damage the ability of state workers—many of whom are women—to collectively bargain. I am deeply concerned about what the outcome in this case will be.

DM:Once a state passes protections for domestic workers, what’s the enforcement mechanism? What needs to happen to ensure that employers comply?

SB: The movement certainly doesn’t stop or even take a break once legislation is enacted. If anything, activity seems to kick into higher gear. Efforts to educate domestic workers about their rights are critical. We see such efforts through the Nanny Van in New York, which generates know-your-rights materials and acts as a convening space for domestic workers. I am also very happy that my book tour may be a way for domestic workers to celebrate and learn more about each others’ hard-fought successes!

DM: It seems the potential for exploitation largely depends on the state in which a domestic worker is employed. What needs to happen at the federal level to impose a nationwide standard?

SB: We need a federal minimum wage increase. A federal minimum-wage increase can improve earnings for all domestic workers regardless of where they live. Sadly, the Senate recently failed to raise the minimum wage from $7.25 to $10.10 per hour. If the wage were keeping pace with inflation, it would be $10.86 per hour by some estimates.

Bapat and members of the NDWA will be at the Institute for Policy Studies in DC on Tuesday, June 17 at 5:30 pm to discuss the book and the movement for domestic workers’ rights.

*This interview has been condensed and edited for clarity.