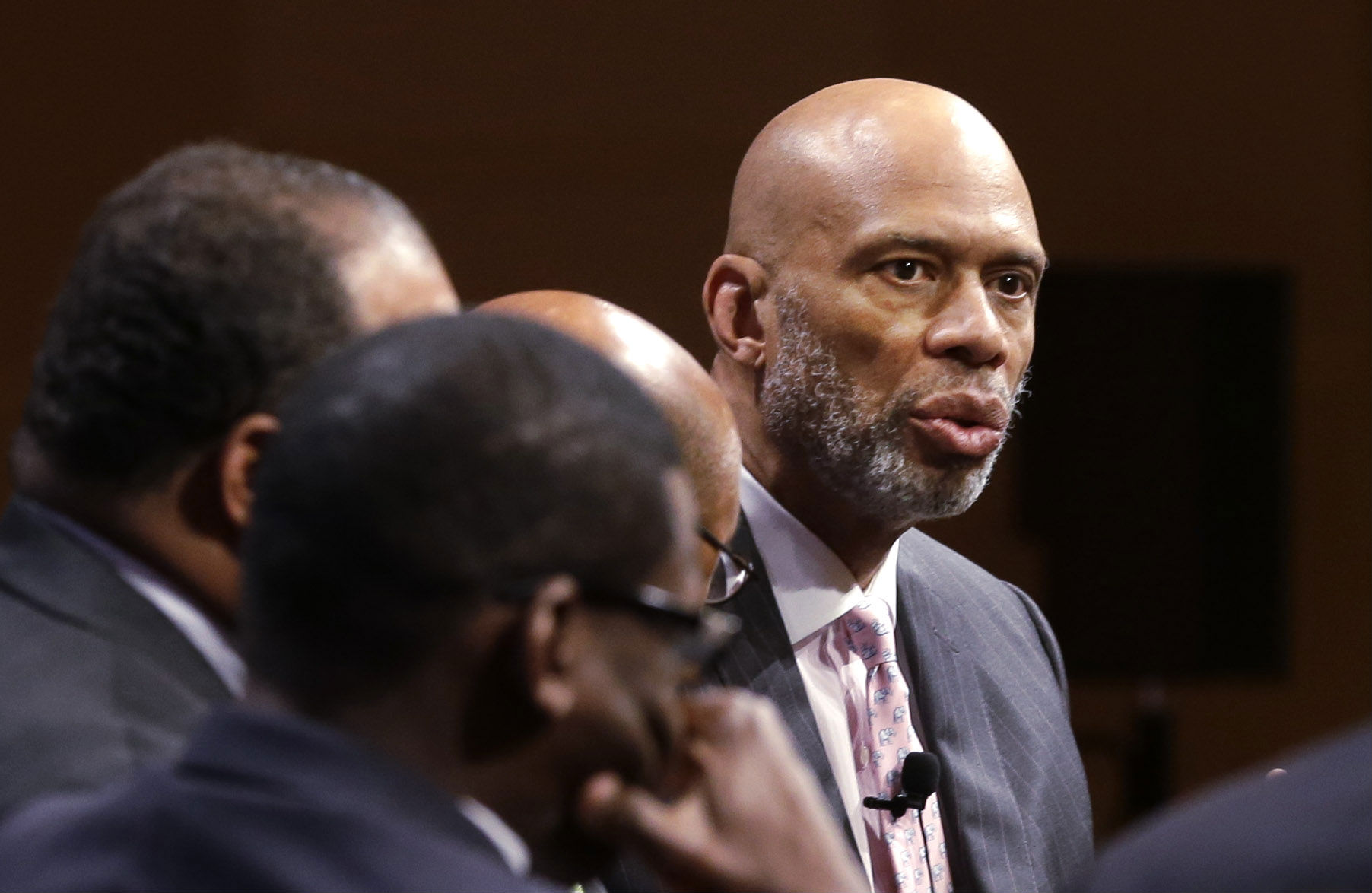 There is so much good in Kareem Abdul-Jabbar’s Time magazine essay about the protests following the police killing of Michael Brown in Ferguson, Missouri, that it almost feels churlish to raise any kind of criticism. After all, here is a basketball legend, the all-time leading scorer in NBA history, the master of the skyhook, marshaling his platform to speak about poverty and class in the United States. Kareem even references the new book Unspeakable Things: Sex, Lies and Revolution, by radical journalist Laurie Penny.

Everyone should read his piece. People in the United States with positions of authority rarely, if ever, talk about class. And yet here is Kareem putting not just Ferguson but the whole of the United States directly under that economic microscope saying, “We have to address the situation not just as another act of systemic racism, but as what else it is: class warfare.”

Kareem says—and this is unarguable in my view—that if the 50 million people who live below the poverty line joined together, they would become “a powerful block if they ever organized in an effort to pursue their common economic goals.”

He talks about the rise in poverty and the ways the modern media and “the 1 percent” keep the poor at each other’s throats. He even references how the mammoth success of dystopian teen fiction like Divergent and The Hunger Games symbolizes the ways that so many young people feel hopeless and helpless about their economic futures.

Thank you, Kareem, for writing about class. Thank you for writing about the ways the wealthy divide to conquer. Thank you for quoting John Steinbeck and Marvin Gaye. The entire essay reminded me of the famous quote that if the poor could be organized to spit at the halls of power simultaneously, corruption would be washed away in a righteous flood.

And yet… there is also a serious and extremely fundamental problem with Kareem’s piece. This is first seen when he writes that making Ferguson about the “fist-shaking of everyone’s racial agenda distracts America from the larger issue that the targets of police overreaction are based less on skin color and more on an even worse Ebola-level affliction: being poor.”

Michael Brown was shot dead by the police because he is black. If he was white, no matter how poor, he almost certainly wouldn’t have died. If that is not your starting point, then you are lost without a compass. Yes, Ferguson is in so many ways a “class issue”. But Ferguson and the death of Michael Brown is about racism. If we don’t acknowledge the centrality of racism both in this case and in how racism is used to divide people, then the unity of the 50 million poor people that Kareem wants to see will forever be a pipe dream.

The problems with Kareem’s argument come into sharper focus when he brings up the issues that “keep the poor fractured by distracting them.” He brings up “immigration, abortion and gun control” as reasons why poor people “never stop to wonder how they got so screwed over for so long.” Yet immigration and abortion are not “distractions.” They are about race, gender and, yes, class oppression. Immigrant workers are more likely to live below the poverty line than those who are native-born. If immigrant workers can be locked in a purgatory of unorganized, undocumented status and branded as “illegals,” then that serves to drive down the wages and political capital for all workers. Since so much of anti-immigrant rhetoric is built around anti-Latino invective, any kind of class unity will forever be illusory if fighting this kind of racism is not at the heart of how we organize.

The same principle holds true for abortion. The closing down of clinics, the attacks on Planned Parenthood, the fact that 87 percent of counties now have no abortion facilities, amount to an attack on the healthcare available to poor women, particularly black and brown women. If you don’t stand up for the reproductive rights of poor women, why would they want to join your 50 million–strong movement?

The point of all of this is to say that fighting racism, sexism and anti-LGBT bigotry is not a distraction from building a united struggle but a precondition for building a united struggle. Oppression acts as a cancer on the solidarity necessary to fight for a better world. If Kareem wants to see class unity, then the people risking their lives in Ferguson should not be seen as people “fist-shaking for a racial agenda” but instead as the brave souls on the front lines in the fight for a better world: a world where people aren’t shot dead by cops because of the color of their skin. Kareem wants to see solidarity. It starts with solidarity with the people in the streets of Ferguson. It starts by arguing explicitly with white workers that their sympathies should lie with the people of Ferguson and not the politicians or the police. With one voice, we need to say that the real looters are on Wall Street, and without justice there can never be peace.