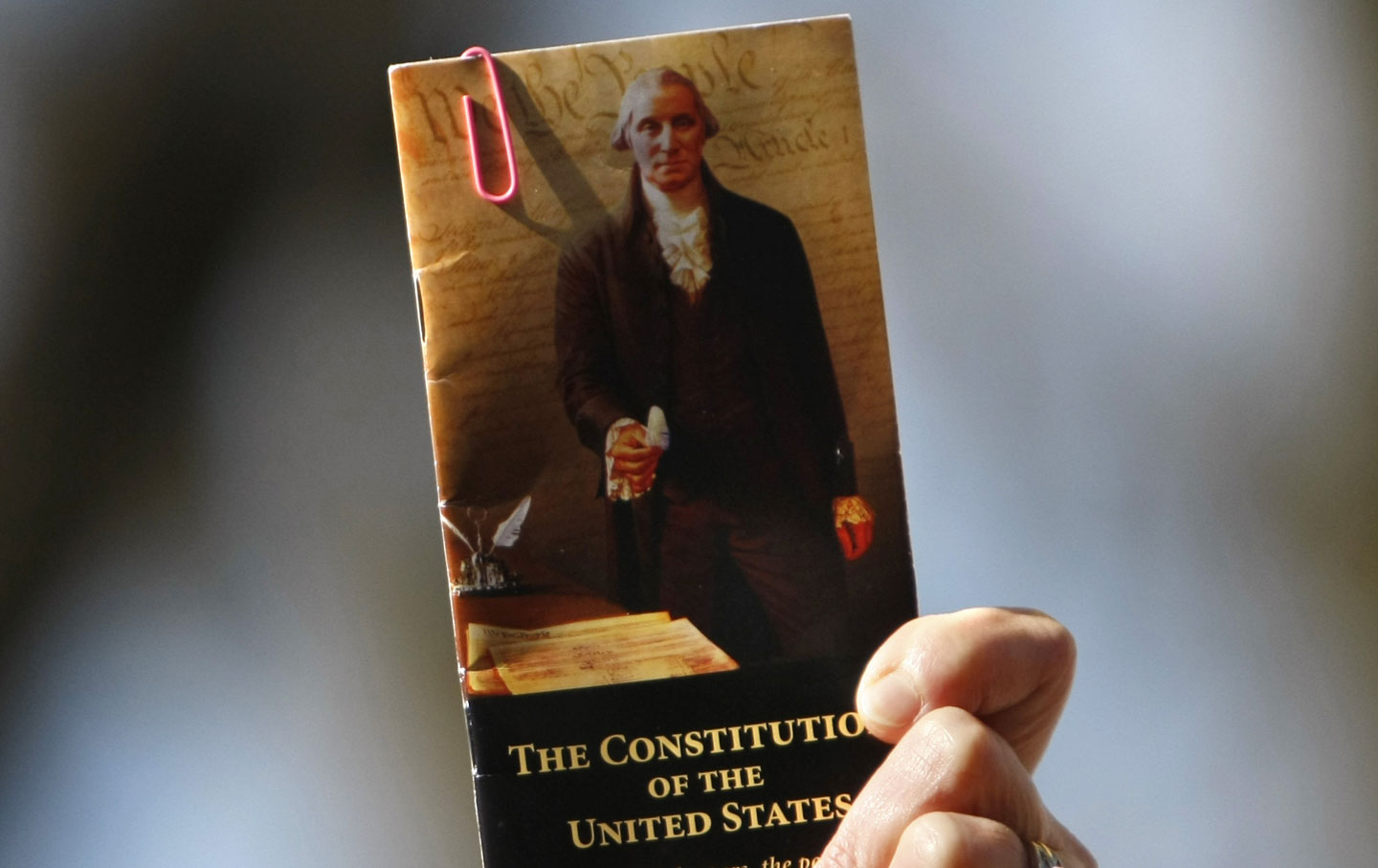 Walt Whitman got it right, ten years before the founding of The Nation, when he advised Americans to “re-examine all you have been told at school or church or in any book, dismiss whatever insults your own soul….” This goes double for the left, which cannot afford to neglect the crumbling infrastructure of our democracy, or to treat as sacrosanct a creaking constitution that thwarts rather than extends the will of the people.

Nothing locks in inequality and dysfunction like a constitution so imprecise that it allows right-wing judicial activists to make buying elections easy and voting in them hard. But don’t just blame “constitutional conservatives” for turning our founding document into an outline for oligarchy. Fret about liberal constitutionalists who imagine we’re just one thrilling presidential appointment away from making our democratic vistas real. Like Democrats dreaming of another FDR, liberals waiting for another Earl Warren miss the point. Our democratic destiny is not something to wait for—it’s something we have to make happen. Dissident Americans have been bending the arc of history by rewriting the US Constitution since amendments were added with quill pens. Today’s dissenters should be about the business of doing so once more.

The Constitution began as a flawed document based on compromises between barely reformed royalists and slaveholders whose definition of “liberty” did not include the “property” they finally agreed would be counted as three-fifths of a human being. The most enlightened thinkers and the boldest rabble-rousers were not in the room at the founding moment. Tom Paine was fomenting revolution elsewhere and imagining progressive taxation. Ethan Allen was still in trouble for challenging organized religion with his pamphlet Reason: The Only Oracle of Man. Daniel Shays had yet to be pardoned for arranging a popular rebellion against oppressive debt collection. Instead of democracy, the Constitution of 1787 gave us an unelected Senate, an Electoral College and too many structures intended to control the unruly masses. Americans who had fought to end the abuses of old elites objected to the prospect of being abused by new ones: they demanded and by 1791 had won the ten amendments known as the Bill of Rights. Seventeen more amendments have come into being since then, including some that radically restructured how members of the executive and legislative branches are chosen and serve, and others that extended the franchise even more radically—to African-Americans, the poor, women and 18-to-21-year-olds.

These amendments made the United States a different and better nation. But we are not different and better enough. Foreseeing our contemporary circumstance, Thomas Jefferson counseled against viewing the Constitution as “too sacred to be touched,” warning: “We might as well require a man to wear still the coat which fitted him when a boy, as civilized society to remain ever under the regimen of their barbarous ancestors.” Jefferson also argued, “The real friends of the Constitution in its federal form, if they wish it to be immortal, should be attentive, by amendments, to make it keep pace with the advance of the age in science and experience.”

The real friends of the Constitution today champion a “move to amend” that would declare that corporations are not people, that money is not speech, and that votes must matter more than billionaires’ dollars. Sixteen states and some 600 communities have recently demanded that Congress initiate a constitutional response to the judicial activism that has allowed elites to commodify our politics and corporatize our governance. At the same time, activists are taking up a proposal by Congressmen Mark Pocan and Keith Ellison to end the crude assault on voting rights with an amendment that establishes, finally and unequivocally, a right to vote and to have every vote counted. These are good starting points, but they are not an end to anything.

The Constitution should be clarified so that it sustains rather than throttles democracy. Do away with the Electoral College. Ban the practice of gerrymandering. Close the loophole that allows governors to appoint cronies to vacant Senate seats. And then get serious: ask, as Congressman Victor Berger did more than a century ago, why America maintains a House of Lords–like Senate where, today, the vote of a member elected by 121,000 Wyomingites can cancel out the vote of a member elected by 7.8 million Californians. Consider electing members of the House to four-year terms that parallel those of the president, so that the popular will of 131 million voters in the presidential elections can’t be stymied by 90 million midterm voters. Object to any calculus that prevents a majority-black District of Columbia and a majority-Hispanic Puerto Rico from becoming states. Re-examine every barrier to democracy, including those of poverty, ignorance and incapacity. When Franklin Roosevelt spoke of the freedoms required to shape democratic societies, he included “freedom from want” and “freedom from fear.” Let’s restart that debate about freedom and democracy. And let’s do so not in the drab language of bureaucratic reform, but in the radical language of giving power to the people. No constitution can repair every breach in society, but a renewed US Constitution can clear the way for the people—the whole people, as opposed to a handful of elites—to forge a more perfect union.

The point, after all, is not the perfection of a document; it is the power of the people to shape their future. Something remarkable happens when transformative power is on offer: apathy ends. I saw it in Scotland in 2014, when voters considered declaring independence from the United Kingdom and from the austerity policies of London’s mandarins. Popular engagement exploded; voter turnout soared above 85 percent. And while independence was not declared—this time—politics was transformed into something real. This is what the left should offer America: a vision of a next politics where, as Robert M. La Follette proposed, “The will of the people shall be the law of the land.”

Talk of structural change still frightens some liberals—as it does many conservatives. Opening up a big debate requires faith in humanity. And even those who harbor such faith will ask: How can we, the people, ever beat the billionaires and media moguls of a digital age? As if it was easy to beat the robber barons and press lords of the new twentieth century on behalf of amendments to elect senators, impose taxes and enfranchise women. Yes, going to the root of the matter is daunting. But the alternative is a strategy of managing democratic decline. And that is no strategy for a left that seeks a transformative politics

What, then, should be the end of this striving? Let us aim for the goal that Tom Paine outlined in Rights of Man: “When it shall be said in any country in the world, my poor are happy; neither ignorance nor distress is to be found among them; my jails are empty of prisoners, my streets of beggars; the aged are not in want, the taxes are not oppressive; the rational world is my friend, because I am the friend of its happiness: when these things can be said, then may that country boast of its constitution and its government.”