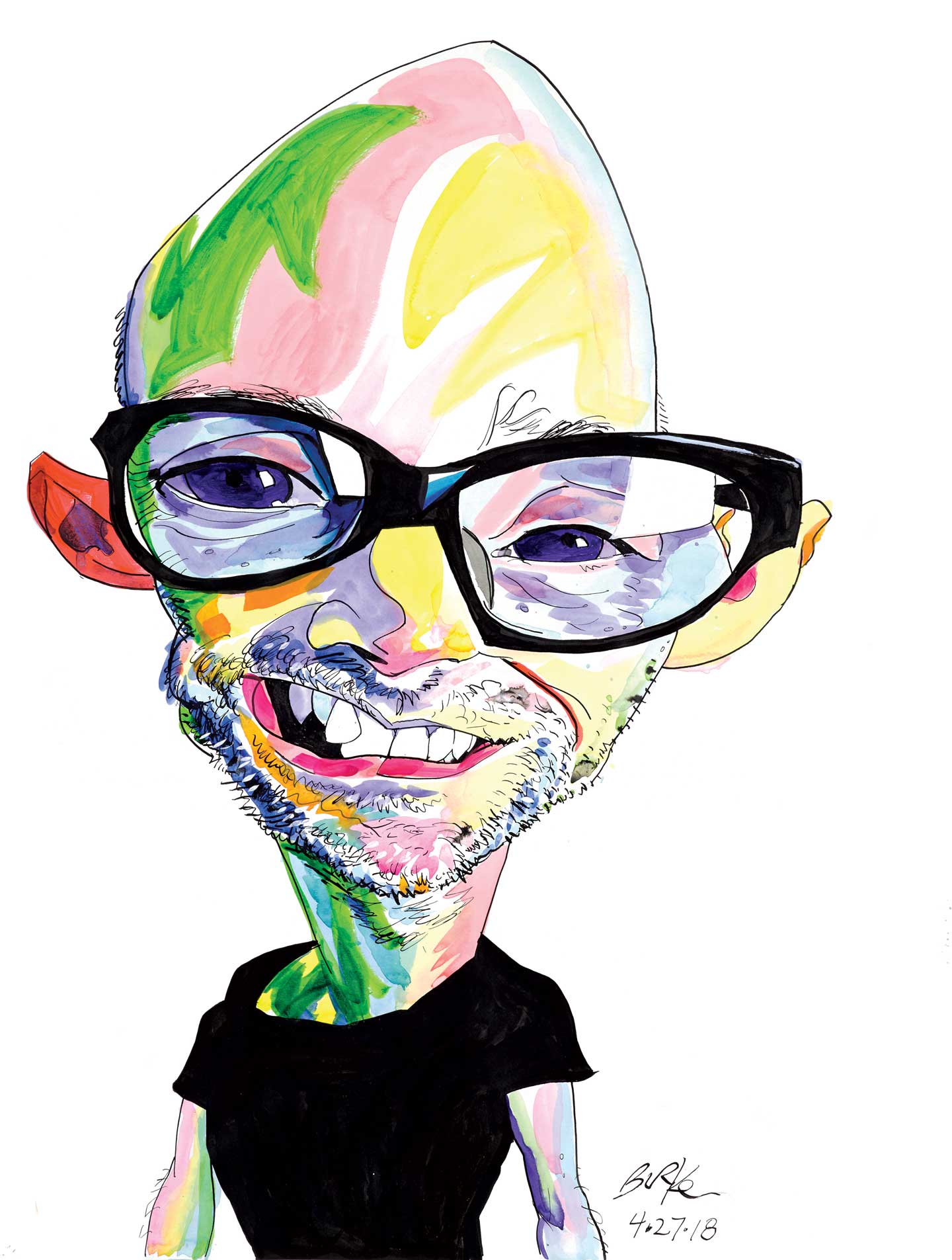 It’s never been easy to make something new. Inspiration strikes; insight occurs; shit happens. The American electronic musician Richard Melville Hall, better known by the stage name Moby—yes, he’s related to Herman Melville—has always seemed a good example of that particular creative struggle. He’s spent the past three decades toiling away in the studio, making sure the conditions are right to bottle lightning in a Leyden jar, but it hasn’t always paid off. More than anything, the creative process operates at the level of faith and ritual, as a kind of prayer: Sometimes the void hears and answers, but more often the artist is left alone with his or her thoughts.

Everything Was Beautiful, and Nothing Hurt, Moby’s 15th studio album, sounds like the product of hours spent in fruitless supplication. It’s obvious that he took his time with the album, but musically, it feels teleported directly from 1999, the year that Moby’s breakthrough, Play, was released. That record, Moby’s fifth, came after a string of buzzy triumphs (Moby, 1992; Everything Is Wrong, 1995) and fan-base-alienating flops (1996’s Animal Rights). Play would become Moby’s calling card, the work that cemented his status as the savior of American electronic music; it was also one of the first albums ever to be licensed in its entirety, with its songs appearing in commercials, TV shows, and films. It turned Moby into an overnight pop sensation.

What drew listeners to Play was its amalgamation of sounds and styles that encapsulated trip-hop, which at the time was ascendant. Built around a series of field hollers sampled from an Alan Lomax box set, Sounds of the South, the album featured Moby’s moody electronic noodling over brooding beats. The result was textured, stuccoed, more architectural than sculptural. This approach worked on “Porcelain,” which could be heard in cocktail bars around the world and didn’t suffer from extensive sampling, but not so much on other cuts from the album. On “Honey,” a single that samples the singer Bessie Jones’s “Sometimes,” it feels like Jones’s art is carrying Moby’s; the juxtaposition is productive and not quite appropriative, but Moby’s electronic production is constantly fading into the background. The same thing happens on “Natural Blues,” another massively popular single. Moby sampled the blues singer Vera Hall’s “Trouble So Hard” and set it to relatively eclectic percussion and a propulsive piano line, which thankfully doesn’t lessen the power of Hall’s voice, though it can’t enhance it much, either.

The samples that Play’s songs are built around came from a place of authentic lived experience; in the cases of “Honey” and “Natural Blues,” both women were born black in 1902—into a world of segregation and outright discrimination. What the samples obscure are their biographies, the lives they went on to live after Lomax captured their singing for the Library of Congress, and the real power of their words. There have been many books written about the white pursuit of musical authenticity through black musicians, but a recent favorite, Hari Kunzru’s ghost story White Tears, puts the dilemma best. “On your record deck, you played the sound of the middle passage, the blackest sound. You wanted the suffering you didn’t have, the authority you thought it would bring,” Kunzru’s protagonist offers. “I never wanted the authority of suffering—I suspected it would have a bitter taste.” This is something that Play doesn’t quite understand; it doesn’t get that pastiche is not at all equivalent to real feeling.

Moby has obviously matured as an artist in the nearly two decades since Play made him a household name. His detours through different modes—ambient (Hotel, 2005), dance history (Last Night, 2008), and New Agey post-rock (Innocents, 2013)—have been, if not fruitful, at least propelled by a genuine curiosity. He’s been trying. Which is why Everything Was Beautiful, and Nothing Hurt is so baffling: It’s incurious, and it commits a cardinal musical sin by being boring as hell. The album finds Moby going back to the well that made him rich and famous, the speak-singing trip-hop so prominent on Play and its follow-up, 18 (2002). But here, it just feels old—as though the onetime pioneer had ignored the past decade of music.

Moby has described the video for “Mere Anarchy,” the first song on Everything, as a postapocalyptic trip. “People are gone, and my friend Julie and I are time traveling aliens visiting the empty Earth,” he told Rolling Stone in January. “Caution of the world you said was over / Caution where we were / Caution where we were / O-o-oh,” goes the chorus, which makes sense only in that it sounds like an alien—or a deeply alienated person—wrote it. As for the rest, there are odd, muted handclaps and a synth line that approximates a string section. The whole song is so anodyne that, after it’s done, it’s hard to remember what you just heard.

A couple of tracks later, “Like a Motherless Child” covers the chorus of the traditional Negro spiritual. Clearly Moby is reprising “Natural Blues” here, in spirit if not in its samples, but Raquel Rodriguez’s breathy vocals can’t compare with any version I’ve heard of the original. I would also be remiss not to note that the spiritual refers directly to the pain of slavery: the pain of being sold away from one’s mother, specifically, or of being alienated from Africa and yearning for one’s home. The song is old enough that we can’t know for sure, but the utter despair in it is the reason it’s stood the test of time: Across history, people have related to the pain of forced separation.

Yet in Moby’s corruption, the chorus is merely a backdrop for something nameless that frightens him. Pain is universal, of course, and the original “Motherless Child” is one of the best expressions of it, but Moby’s opacity obscures even what he’s hurt about. Honestly, I can’t tell what he’s trying to say or what he’s suffering from here:

It reads like deeply felt slam poetry from a sheltered suburban 18-year-old. What else is there to say?

Most of the other songs are even worse: unearned, saccharine-sweet, and wispy experiments, ideas stretched out well past four minutes. “The Middle Is Gone,” a cut near the end of Everything, is classic Muzak: “I let too much in / And the souls begin / We were so much alive I couldn’t win / I had life pursuing sin / But I’ll never be free / Always plagued by what I can never be,” Moby sings. It’s as though he’s only just figured out the limits of his world, and that he’ll never be able to escape other people, even if they hurt him. “I tried so hard / Haven’t figured anything out / Left behind so much pain,” he says in the third verse. The production shimmers, but the words undercut any real feeling that it might produce. It feels a lot like coming across a fedora’d man with a guitar at a Greyhound station in San Francisco around 3 pm and watching him strum dissonant chords while he sings the word “Corporations!” over and over again.

That’s not to say Everything is all bad. The closing track, “A Dark Cloud Is Coming,” is yet another song fashioned from the Negro spirituals Moby loves so much—but this time it works. The production is relaxed, with a heavily reverbed guitar giving the song some air and life; the bass kick is feather-light, and it moves the song along at a pleasantly loping pace. Again, as with the various singles from Play, it’s not the song’s composition that does most of the work, but rather the singer’s voice. Apollo Jane’s alto is languid, honey-thick, and soulful here; you believe her when she sings, “A dark cloud is coming / Yeah, a dark cloud is coming / Come for me now,” as though she’s decided to embrace the apocalypse and make her peace with death.

The album’s title, of course, is another reference to dying. It’s from Kurt Vonnegut’s Slaughterhouse-Five, a book about what it means to die and about how that meaning is so often erased. “If you think death is a terrible thing, then you have not understood a word I’ve said,” Vonnegut’s protagonist says just before his own death. Why Moby picked one of the novel’s more famous quotations as his album title isn’t immediately obvious, but it’s clear that Everything Was Beautiful, and Nothing Hurt is an attempt to wrestle with the larger questions of one’s being in the world—of the fact of one’s mortality, as an artist and as a living thing. But even good art can’t save you from the end. So it goes.