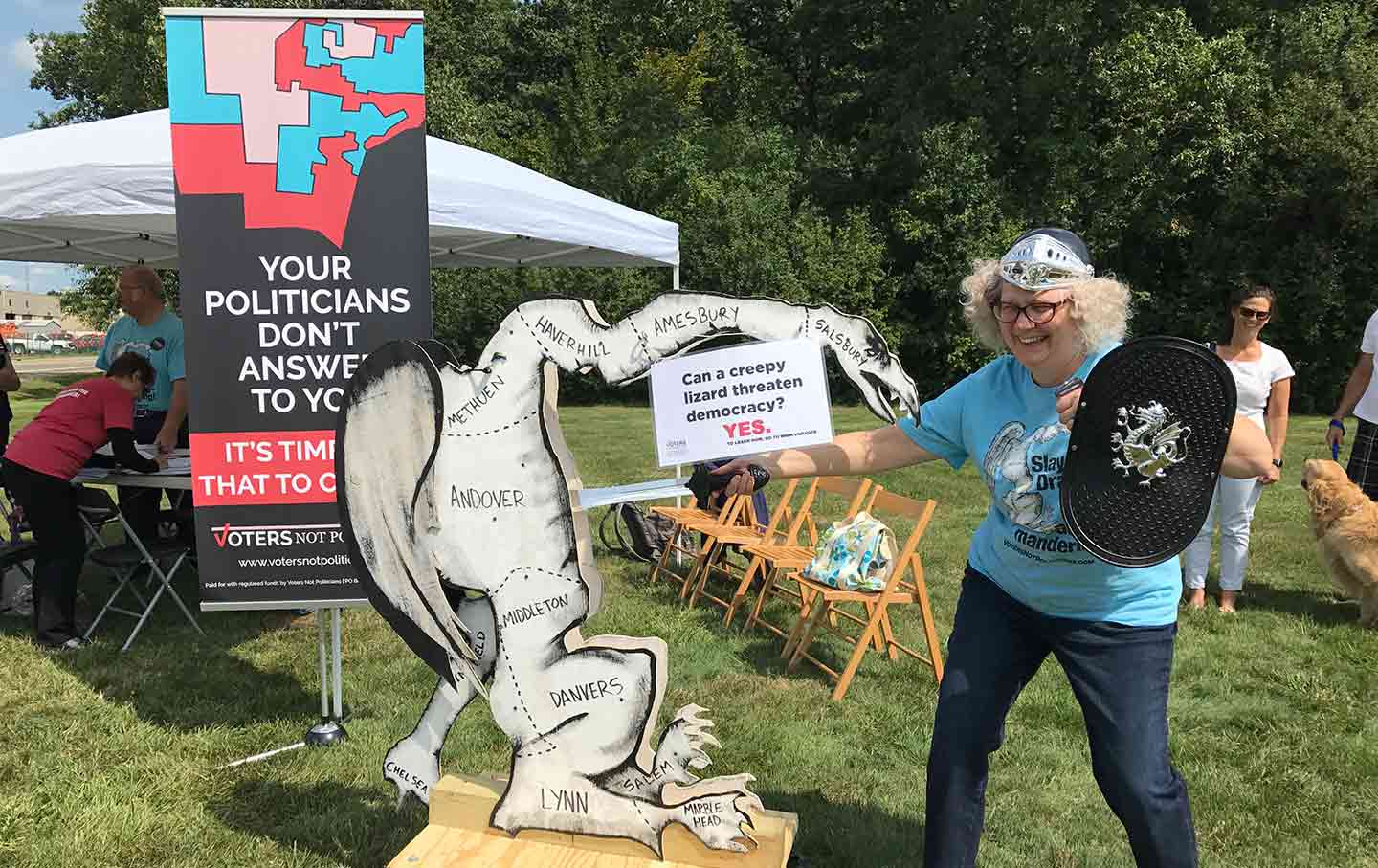 Three days after Donald Trump’s election, Katie Fahey, a 28-year-old Michigander who works for a recycling nonprofit, sent a message into the Facebook ether, not knowing what might come of it. “I’d like to take on gerrymandering in Michigan,” she wrote. “If you’re interested in doing this as well, please let me know.”

To her surprise, the message got shared, and shared, and shared some more. Pretty soon the Facebook post had turned into a Facebook group with a couple hundred supporters of all political persuasions from all over the state—lawyers and veterinarians, teachers and doctors, stay-at-home parents and accountants and mailmen. Google Docs and conference calls ensued, followed by fundraising and the formation of leadership committees. By early December, an ambitious statewide campaign to end gerrymandering in Michigan had emerged, with Fahey at its helm.

“After the November election, people who hadn’t been involved in politics before started to pay attention,” says Fahey, who lives in the Grand Rapids area. “There was extreme frustration with the way things were being done.”

Fahey’s strictly nonpartisan group, which calls itself Voters Not Politicians, has channeled that frustration into a grassroots effort to alter the state Constitution and effectively prohibit partisan gerrymandering there. The group’s volunteers, who now number in the thousands, are presently collecting signatures to put an initiative to that end on the 2018 ballot. If they succeed, if they manage to break the power of entrenched politicians to shape election maps, Michigan’s voters will surely benefit from more representative political leadership.

The Great Lakes State suffers from some of the most cynically designed electoral districts in the country. After 2010’s midterm election, when the Republican Party took control of all three branches of Michigan government, its operatives redrew the voting map there, reshaping congressional and statehouse districts in an absurd, almost surrealist, manner. One congressional district, the 14th, is curving and chunky and S-shaped, like a bloated snake. Another, the 11th, looks like an upside-down U, one half of which has been shriveled by the sun. Still another, the 12th, could be a misshaped yogi in the middle of a sit-up. This Dalí-worthy district redesign, meanwhile, has benefited the GOP mightily.

According to a 2017 report from New York University’s Brennan Center for Justice, titled “Extreme Maps,” Michigan, along with North Carolina and Pennsylvania, is one of the three states in the nation whose congressional districts consistently exhibit “the most extreme levels of partisan bias.” Partisan bias, the report’s authors write, is “the degree of systematic advantage one party receives over another in turning votes into seats.” Indeed, Michigan districts so effectively reward Republican officeholders that the GOP likely has control over an average of two extra congressional seats as a result. And that’s not to mention state-level House and Senate seats, where outcomes are even more skewed against Democrats. A recent article in Bridge magazine found that Democrats won a slim majority of total votes in Michigan’s state House election last year, but gerrymandering helped the GOP capture 63 of that legislative body’s 110 seats—or more than 57 percent.

Fahey and the sprawling team at Voters Not Politicians hope to permanently do away with this sort of partisan cartography. In early August, the organization received official approval from the state’s Board of State Canvassers to start collecting signatures for a 2018 ballot initiative that would prevent any one party from dominating future redistricting in the state. The initiative calls for the creation of a 13-person commission, divided among Republicans, Democrats, and Independents, that must reach consensus on future redistricting designs. Prospective commissioners will be selected through an open application process as well as a randomized mailing solicitation and then winnowed down through a lottery of sorts. Lobbyists, party officials, the relatives of such officials, and other partisans will not be allowed to sit on the commission.

What’s more, the commissioners will have to design voting maps in an open and transparent manner and in line with a strict set of rules. They cannot, for instance, redesign a district to favor an incumbent or give advantage to a particular party, and their work will be measured using political-science metrics of partisan fairness. Future districts, moreover, must be reasonably compact and reflect due consideration of county and other jurisdictional boundaries.

As it pursues these reforms, Voters Not Politicians has become an exemplary model of creative civil-society organizing in its own right. All of its members are volunteers and 100 percent of its roughly $150,000 in campaign funds have come from individual grassroots donors, according to Fahey. Many of its volunteer leaders are proud political amateurs too; its state field director is a former math teacher, its policy team includes a doula and a brain surgeon. Its events, meanwhile, are often festive affairs, featuring costumes and cakes shaped like Michigan’s strange congressional districts, along with sculptures of the districts built out of Legos.

In July, the group held 33 town halls in 33 days to solicit feedback and build support for its proposal, drawing crowds from Marquette, in the remote Upper Peninsula, to Metro Detroit. Many of them were standing-room-only affairs, says Fahey.

Now the group is in the midst of holding house parties, attending festivals and football games, and canvassing neighborhoods to gather the more than 315,000 signatures it needs by February to get its initiative on the ballot. To reach this goal, it has mobilized a well-organized volunteer force across the state.

“We split the state up into 13 regions, and have a staff of 13 volunteer regional directors. They supervise more than 150 captains between them. And the captains supervise over 2300 trained circulators,” says Jamie Lyons-Eddy, the group’s state field director and a former math teacher in the suburbs of Detroit. “But a lot more people are in the pipeline and volunteers are joining every day. That’s the system, and it’s all over the state.”

Michael Li, senior counsel at the Brennan Center for Justice, who has advised Voters Not Politicians in recent months, says it’s this sort of grassroots campaigning that often produces the best results when it comes to challenging partisan gerrymandering.

“What they are doing is one of the few ways you can get meaningful redistricting reform in this country,” he says. “Lawmakers are remarkably hesitant to turn over power. Reforms tend to be stronger and more independent when you have citizen-led efforts that aren’t constrained by political consideration.” He points to California, which in 2008 approved a redistricting reform ballot initiative, as another place that has successfully challenged gerrymandering.

Voters Not Politicians, for its part, is planning for the long haul. These days, that means preparing for pushback from the powers that be. Fahey says the group expects conservative organizations or activists to file a lawsuit to block the ballot initiative should it make it past the signature-gathering stage. And if the initiative doesn’t get enough votes in 2018, she says the group is prepared to keep trying until it wins.

Still, Fahey is optimistic that Voters Not Politicians, with its impassioned, grassroots, nonpartisan approach, could carry the day the first time around.

“There is clearly pent-up energy to address this issue,” she says, pointing to the thousands of individuals the campaign has already recruited. “We do feel like we could win it,” she adds. “People want reform in Michigan.”