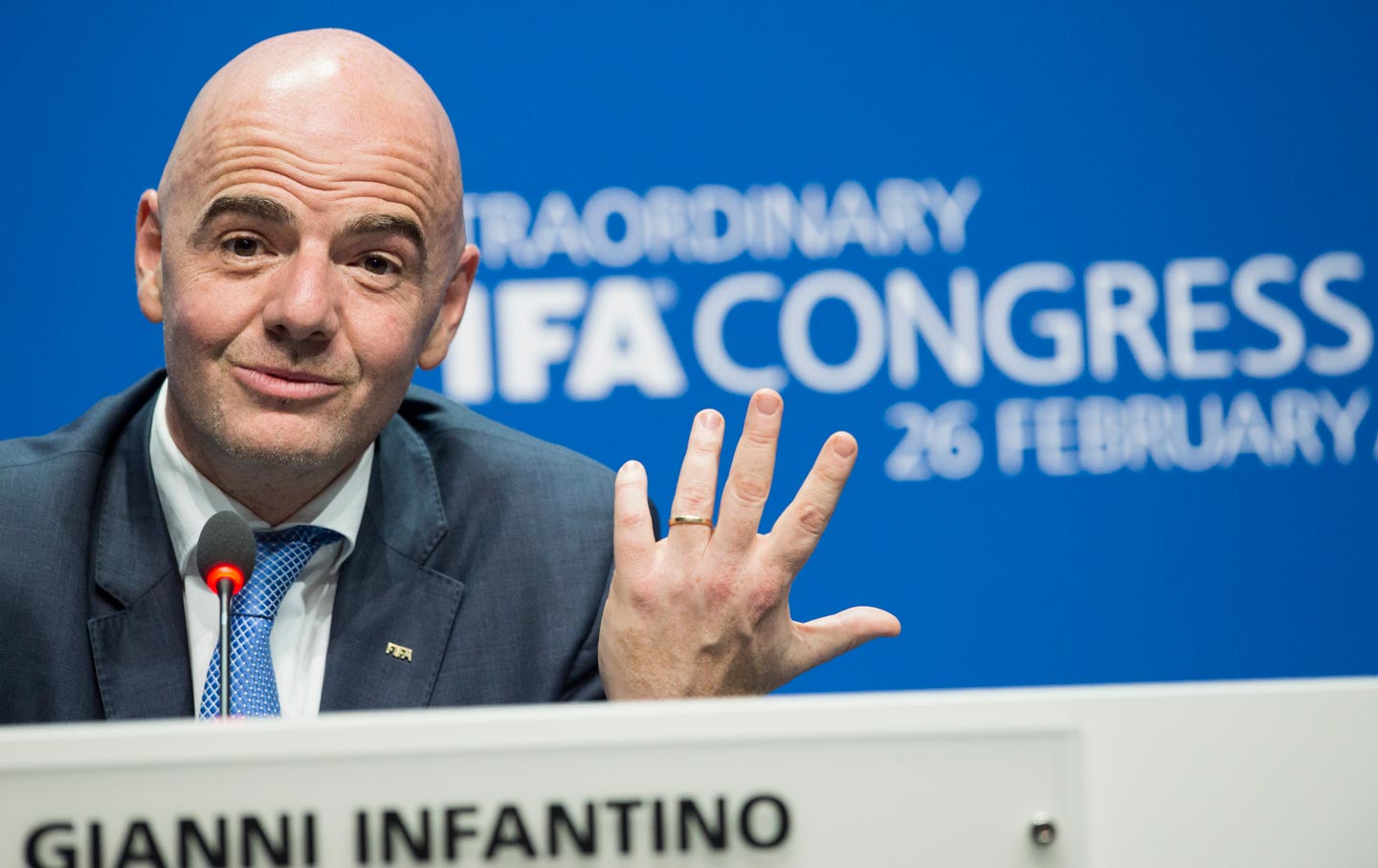 If the joke about Sepp Blatter was that he resembled a Bond supervillain more than the head of the globe’s most powerful sports cartel, then new FIFA chief Gianni “Johnny Baby” Infantino is more like a sidekick to Austin Powers. He’s one of the good guys, but questions remain over whether his role will transcend comic relief.

Infantino, who delivered his election speech before the FIFA Congress in six different languages, including Arabic, is also perfect for the new era of FIFA: one built around regaining the trust of corporate sponsors and fans as well as the kind of ceremonial leadership that more closely resembles Prince Philip than King Henry VIII.

That’s what’s needed when your federation has run up a $108 million deficit over the last two years, faces ongoing US and international probes into bribery, match-fixing, and fraud, and is seen as a Cosa Nostra in Sweat Socks. Electing someone who can stroke the sponsors is also a critical imperative when you are locked into sending your next two World Cups into Russia and Qatar, two countries that don’t exactly sing “Western Corporate Synergy.” In Qatar, particularly, there have been labor abuses that have killed hundreds of migrant workers, and, even more difficult for FIFA’s Congress, the event will be held in autumn 2022 instead of, per tradition, during the summer.

Many—myself included—believed that the new head of FIFA would be Asian Football Confederation president Sheikh Salman bin Ebrahim al-Khalifa, a member of Bahrain’s royal family. Salman was a Sepp Blatter acolyte who was alleged to be tied to the torture of Bahraini athletes who took part in the Arab Spring. Salman’s public denials of these horrific charges could best be described as blasé. In the lead up to the elections, Salman also signed on to an Amnesty International human-rights pledge, but excised, before putting his name down, all references to gay rights or condemning the myriad human-rights abuses in Russia and Qatar. Torture? Commitment to upholding dictatorial planning of soccer tournaments? You can see why one would think he had the inside track.

Alas, Sheikh Salman came in second, as the FIFA Congress instead made clear that they did not want a Sepp Blatter with literal, as opposed to symbolic, blood on his hands. They require a maître d’, not a dictator. The clue, as Billy Haisley over at the Deadspin soccer site Screamer, pointed out should have been when FIFA in an internal memo that read in part, “The president’s role will be strategic and ambassadorial and no longer executive.”

This fits Infantino to a tee. As Haisley wrote, “When he announced his candidacy and began the Infantino for President World Tour, Infantino came off like a guy who wanted Blatter’s old job as much for the glamour and prestige and fame that went along with such an exalted job title as out of any real sense of duty to head the reconstruction project of a new and hopefully non-criminal FIFA. That the writing was on the wall—and, helpfully, in his campaign advisor’s inbox—that the next president would not be taking over the ungoverned, bribery-laden world of Blatter’s empire and instead would serve a more ceremonial role was probably a plus in Infantino’s thinking. After all, negotiating the terms of backroom deals between various lobbying factions isn’t nearly as fun as trips to Southeast Asia to pose for pictures and cut the ribbon on the new Thailand Youth Development Center For Girls.”

This is not to say that Infantino is an intellectual lightweight. Johnny Baby worked as the Secretary General of the International Center for Sports Studies (CIES) at the University of Neuchâtel. He also played a leadership role on the FIFA reform committee that suggested many of the welcome recommendations that were just approved, including 12-year term limits, an expanded role for women, and independent auditing as well as further transparency in finances. In addition, Infantino pledged to raise the number of World Cup teams from 32 to 40, although that would be a neat trick given the dizzying deficits on FIFA’s ledger.

But above all else, Johnny Baby benefited from a decided lack of executive experience in the sprawling FIFA universe. It meant he had the cleanest hands in the room, hard as it is to torture or bribe people when you are the number 2. As soccer scribe James Montague said to me, “Infantino’s rise is astronomic. A year ago, he was behind the scenes, a bureaucrat. He’s gone from there to place holder for [former Union of European Football Associations president Michel] Platini, to FIFA president. In the circumstances, given the scandals surrounding FIFA and the [still ongoing] US Justice Department investigation, he was probably the safest pair of hands.”

Yet the cynicism about the process is not held merely by journalists. Palermo president Maurizio Zamparini said this week, “The system doesn’t change, and the new president of FIFA, the chief of bureaucrats, was part of it all before. If he got elected, it’s only because he bought more votes than the sheikh…. I hope they suspend me for saying that: For me it would be an honor.”

Zamparini’s mistrust and skepticism, although without evidence, is hardly his alone. A change at the top does not mean FIFA has somehow been dipped in Lourdes. As Grant Wahl, senior writer at Sports Illustrated, said to me, “Given the culture of corruption in FIFA over the years, it’s impossible to say with certainty that anyone is 100 percent clean. But I do get the sense that Gianni Infantino could be a positive force in cleaning up FIFA. His track record in UEFA is overall a good one, and he appears to be a leader who will be willing to set a tone from the top that improper behavior will be punished. What’s important now is that he backs that up with his actions. Only then will FIFA start earning some credibility.” Credibility is the one thing that Sepp Blatter could never buy. If this playpen of corruption will ever change, Johnny Baby will need to grow up mighty fast.