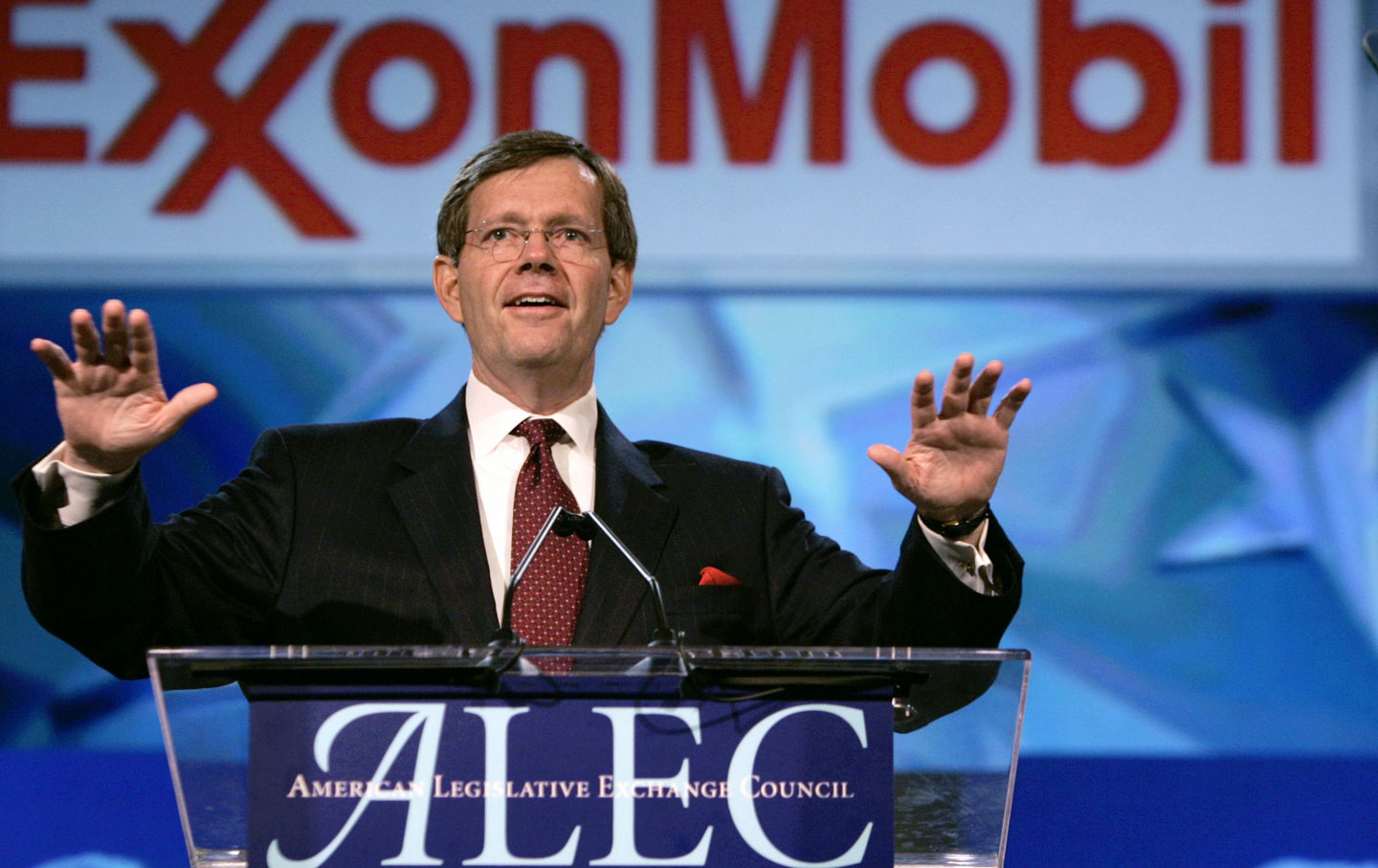 With Congress and the states gridlocked and dominated by special-interest spending, America’s cities have emerged as engines of policy innovation. From efforts to raise the minimum wage and secure paid sick days to bills banning fracking, some of the biggest progressive policy victories in the United States are happening at the local level.

So how has the American Legislative Exchange Council, a powerful lobby serving right-wing interests at the state level, responded to this resurgence of local democracy? With a systematic effort to destroy it.

Thankfully, she added, ALEC has a solution: “ALEC has passed…state legislation that preempts the polities from within the state from raising the minimum wage higher than the state level.” In other words, if living-wage campaigns succeed at the city or county level, state legislators should intervene, repeal, and ban any such advances.

Sullivan’s comments were consistent with ALEC’s longstanding support for bills to block local control over issues that are important to everyday Americans. Even though ALEC has generally bashed all federal policy affecting the states, and its leaders have claimed that “people are better served by local leaders,” for decades its official policy has been to override local democracy when it threatens corporate interests.

So it is surprising that ALEC has launched a new offshoot aimed at city and county government called the American City County Exchange. ACCE, as it is called, held its first meeting last year.

“I was amazed that ALEC was telling a room full of local officials to do nothing, and to let state government handcuff their authority when it comes to matters of interest to their corporate funders,” says Fitchburg, Wisconsin, Mayor Steve Arnold, who participated in the meeting.

Following its big brother’s lead, ACCE is now grooming a farm team of corporate-friendly politicians and equipping them with the tools to promote special-interest bills at the local level. These efforts will be on full display this week as ALEC legislators and corporate lobbyists gather in San Diego for the organization’s annual meeting.

The new group’s director is Jon Russell, a local politician and all-around right-wing zealot. Russell served on the city council of Washougel, Washington, from 2006 until 2012. The Columbian, a local newspaper, once described him as “one of Clark County’s most divisive governmental figures.” When he resigned to take a position with Students for Life of America, an antiabortion group based in Spotsylvania, Virginia, some of his fellow council members told the paper that he would not be missed.

Although Russell remains committed to local politics—he currently serves on the city council of Culpeper, Virginia—part of his pitch as ACCE director involves convincing other local officials to give up their ability to protect their constituents’ health and economic well-being.

ALEC has also long promoted the Living Wage Mandate Preemption Act, a model bill that blocks local governments from raising the wage and has been enacted in recent years in Indiana, Mississippi, and Michigan. And ALEC legislators have supported bills in twelve states to preempt local paid sick day ordinances, most recently in Oklahoma, Alabama, and Michigan.

But ALEC funders see no contradiction in a group purportedly committed to local control working so hard to crush it. Keeping the minimum wage at $7.25 an hour and the tipped-minimum at $2.13 an hour is a top priority for groups like the National Restaurant Association (NRA), which represents fast food chains; the International Franchise Association (IFA); and the American Hotel & Lodging Association (AH&LA). If achieving this goal requires crushing local democracy, so be it.

At the ACCE meeting in December Dean Heyl, a lobbyist for the IFA—a little-known powerhouse funded primarily by global franchisers like McDonald’s and Burger King—described a two-pronged strategy to beat back higher wages.

The second prong in Heyl’s strategy is litigation. Last summer, the IFA filed a lawsuit claiming discrimination against Seattle’s $15 minimum-wage ordinance on the grounds that the big franchisers are forced to pay the higher minimum while small mom-and-pop stores are given exemptions. The organization is also fighting the National Labor Relations Board’s 2014 decision holding major franchisers jointly liable for wage theft and other abuses perpetrated by franchises. And the AH&LA has sued Los Angeles to roll back an ordinance that raises hourly pay for hotel workers to $15.37.

“Low-wage employer groups like the McDonald’s-backed IFA are recognizing that cities are at the forefront of the fight for better wages, and are launching a new assault in the form of laws to block city action and lawsuits aimed at tying worker policies up in court,” said Paul Sonn, general counsel for the National Employment Law Project.

ACCE is also at the forefront of an effort to advance local “right to work” laws in places where statewide laws have been stalled. Right-to-work measures cut off union funding by allowing workers to avoid paying for the costs of union representation, even as they benefit from union-negotiated wages and benefits.

Thanks to ALEC and its corporate backers, along with support from groups like the Heritage Foundation and Grover Norquist’s Americans for Tax Reform, 25 states have passed such laws, with traditional union strongholds like Wisconsin, Michigan, and Indiana joining the list in recent years. Since ACCE’s most recent meeting in December, local right-to-work laws have been enacted in 12 Kentucky counties and discussed in Illinois, Ohio, Missouri, and Pennsylvania.

Passing local right-to-work ordinances has some veteran union-busters pretty excited. “There are literally thousands of targets for the [local right-to-work] initiative,” chirped attorney Brent Yessin at the ACCE meeting.

Yessin, who is spearheading the Heritage-ACCE campaign to pass local right-to-work bills, has built his career on helping corporate interests fight unionization. According to multiple complaints with the NLRB, he has landed multimillion-dollar contracts with hospitals and large healthcare providers to decertify nurses’ unions and crush organizing drives.

Yessin’s team has been accused of deploying a variety of unsavory measures to intimidate nurses seeking to exercise their rights in the workplace. Labor organizer Jane McAlevey encountered Yessin in 2006 while she was fighting a decertification campaign at a Las Vegas hospital. In her view, Yessin’s stock-in-trade was bullying and harassing women. “There are many vicious union-busters who intimidate workers,” McAlevey said. “But Yessin added a sexual predator element.”

In her 2012 book Raising Expectations (and Raising Hell), McAlevey describes a particularly disturbing incident. Yessin, accompanied by security guards, followed her into an elevator, slapped her hand away as she tried to push the stop button, then “pinned me to the elevator wall with his six-foot-plus body, literally pressing his cock against me. That was it. I began to scream, really scream.”

The Las Vegas nurses ultimately defeated Yessin’s decertification campaign. “It took an incredible, sustained effort on the part of healthcare workers, but they beat him,” McAlevey said, “by overcoming their fear and exposing him for who he really was.”

Yessin, undeterred, is now putting his skills to work on behalf of the ALEC and ACCE agenda in Kentucky. Last December, he worked with officials in Warren County to pass a local right-to-work ordinance. In the weeks and months that followed, 11 other counties would enact similar measures, thanks to heavy lobbying by Yessin and Warren County Judge Executive Mike Buchanon. In January, though, 10 local and international unions sued Hardin County in federal court, and the flood of ordinances in Kentucky came to a halt.

Perhaps local officials are catching on that Yessin’s strategy is legally dubious. The 1947 Taft-Hartley Act allows a “state or territory” to enact a right-to-work measure, but for many years Kentucky courts have found that this authority doesn’t extend to cities and counties. Nonetheless, Yessin and his allies have cooked up a theory that “home rule” gives local governments the right to enact such ordinances—a position rejected by Kentucky Attorney General Jack Conway, who is also a candidate for governor. Even the anti-union National Right to Work Committee thinks the strategy is illegal.

Traditionally, local elected officials have had little appetite for costly litigation. Few counties are willing to spend hundreds of thousands of dollars in lawyers’ fees to advance a legal theory cooked up by special interests.

That’s where Yessin and his deep-pocketed anonymous backers come in. Yessin has offered to cover the legal defense for counties that enact local right-to-work laws via a nonprofit called Protect My Check. Not much information is available about this organization, but the corporate officers of Protect My Check and its affiliated group, MyCheckMyChoice.org, are Yessin’s friends and associates, including one of his ex-wives, a longtime law partner, and his current girlfriend.

Yessin told The Nation that a variety of “local business” funders were supporting his legal-defense campaign, but e-mails obtained through open records requests show him boasting that “the Chamber is making commitments with regard to the legal representation in some counties.” Although the US Chamber of Commerce would not return our calls, a representative for the Kentucky Chamber confirmed that the organization has “played a role” in funding the legal defense.

By asking cities and counties to risk costly lawsuits with the passage of local right-to-work laws, while simultaneously warning of the “threat” posed by cities that have the authority to raise the local minimum wage, ACCE seems to be walking a tightrope.

ALEC, which has long positioned itself as an opponent of federal interference with state affairs, is caught in a similar contradiction. At the annual meeting in San Diego this week, the organization will hold a workshop telling state legislators that they should embrace federal preemption of state chemical regulation and to support a congressional proposal to override state and local taxes on rental cars. This message will come from the same organization that has fought the Affordable Care Act and the Environmental Protection Agency’s regulation of carbon emissions under the guise of “states’ rights.”

Reconciling these seemingly contradictory positions is easy, says Mark Pertschuk of the group Grassroots Change. “What ALEC stands for is not local control. It is money. The guiding principle to their astonishing hypocrisy is protecting the profits of ALEC’s funders.”