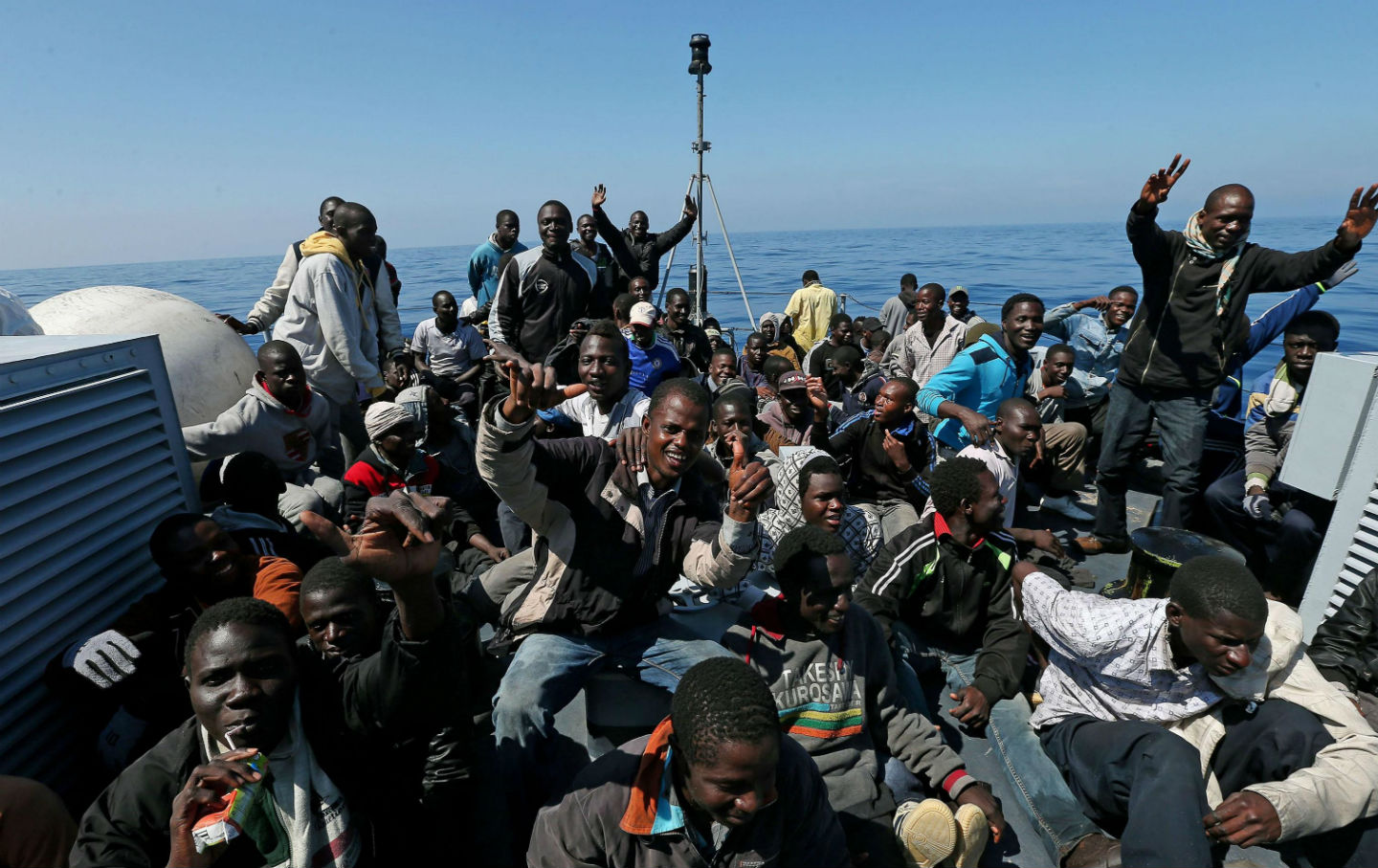 Migrants rejoice aboard the vassel “Denaro” after the Italian Coast Guard rescued them, off the Libyan coast, in the Mediterranean Sea. (Alessandro Di Meo/ANSA via AP Photo)

The scene of hundreds of corpses drifting in the Mediterranean is just starting to stir the conscience of European Union authorities. But despite vague promises of aid, ministers remain adrift in an ethical crisis, still unwilling to open “Fortress Europe” to some of the world’s most desperate people.

Even in the wake of the devastating migrant boat wreck on April 19, at an emergency summit in Brussels, the head of the EU border enforcement agency Frontex rebuffed proposals to expand search-and-rescue operations, saying such measures were outside the agency’s “mandate.” But EU ministers did pledge to triple funding for Mediterranean maritime operations and supply “naval assets” and helicopters for enforcement.

Humanitarian advocates, however, call these measures shamefully inadequate. They demand a systemic approach that not only helps prevent death at the border but also offers more legal pathways to migrate from the Africa region, especially as the refugee crisis intensifies in the Middle East and Africa’s growing conflict zones.

“European migration policies are part of the problem,” says Iverna McGarran, director of programs at Amnesty International’s European Institutions Office. She points to the escalation and militarization of enforcement at both land and sea borders, in order to deter, rather than channel migration. But a realistic solution would involve both “extending the scope of search-and-rescue operations and [ensuring] adequate assets and resources,” across a significantly expanded operation area, along with “a more global reform of European migration policies and practice.”

A more comprehensive response would expand family reunification and humanitarian admissions and allow free travel among the 28 member states, which is currently restricted. And in the long run, an EU-wide resettlement program is vital, lest authorities continue to warehouse migrants indefinitely in the current ragged network of squalid, prison-like detention camps.

With the limited exceptions of Sweden and Germany, McGarran notes, most European countries had offered “appallingly low [numbers of] places” for refugee admission, both reflecting and exacerbating ethnic polarization across Europe.

Amid talk of sending warships to stem migrant flows, officials continue to pass off responsibility for refugees to neighbors. Reuters reports that EU governments “will consider a voluntary scheme to ease the burden of arrivals on ‘frontline’ states in the south—notably Italy, Greece and Malta,” but an emerging “pilot scheme” to resettle migrants across Europe remains largely speculative and without a firm figure on how many would be brought in and where they would go. And while officials dither, the rate of new arrivals is approaching 5,000 a week.

They are following the harrowing route documented in the testimony of a 21-year-old migrant from Gambia, who sailed to Malta in January:

According to Amnesty, the migrants had set sail from Libya and drifted at sea for days with “no telephones, water, or food, and no life jackets…. packed so tightly in their small inflatable dinghy that they could not sit or lie down to sleep.” After arrival they wound up in detention, joining the thousands wending through the byzantine asylum-petitioning process—or they might just escape again, into Europe’s growing population of impoverished undocumented immigrants.

European ministers now fret over whether the migrants are real “refugees” fleeing crisis, or merely “economic migrants” who want jobs. Activists say this semantic dichotomy undermines the fundamental humanitarian issue: No one, regardless of why and how they made the journey, deserves to suffer and die this way.

Officials are also focused on limiting “incentives.” EU leaders had originally scaled back the early search-and-rescue scheme out of fear that an overly liberal border policy acted as a “pull factor” that only encouraged more migration by sea. The theory hinges on a false assumption about migrants’ motives, say activists, because people make the perilous journey essentially because of desperate circumstances in their places of origin, including war and persecution. Unless shuttering borders could somehow shut down global conflict, political oppression, labor exploitation, and social strife overseas, human rights groups say that closing borders is basically the EU leaders’ way of putting on blinders.

Amnesty’s latest report shows the removal of the major supposed “pull” factor last year—ending an EU-wide search-and-rescue maritime operation called Mare Nostrum and leaving only a skeletal parol force in its wake—only intensified another push factor: “While the end of Mare Nostrum has not led to a drop in departures, it can however reasonably be linked to an increase in deaths at sea.” Even prior to the latest mass drowning, migrant deaths were spiking, and the total has nearly doubled to more than 1700, or about a thirty-fold increase over the same period last year.

The conditions reported on the migrant trail underscore countless other human rights violations in the region: darker-skinned migrants from sub-Saharan Africa are subjected to racial discrimination and brutality in the lead-up to and during their journey. Women face epidemic levels of sexual abuse. Libya’s militias and chaotic civil conflicts also abet the business of trafficking syndicates.

To the extent that EU officials seek to remedy any “push factors,” they have made jingoistic overtures toward attacking the trafficking industry, seeking to “identify, capture and destroy vessels before they are used by traffickers.”

The fact that officials seem more enthusiastic about deploying gunships than extending asylum underscores the cyclical nature of this crisis: Governments respond with violent tactics when humanitarian cooperation and social justice are what’s actually needed.

Dismissing the rhetoric of “push factors,” McGarran points out that despite the lethal risks, “people are still boarding those boats. That a family, mothers, fathers, bringing their children would still board the boats, compared to the extent to which their lives are at risk—it says a lot about what’s pushing them. They’re fleeing from poverty, conflict, torture and violence.”

As vicious as the migrant trade is, the market that has developed around this bloody passage is, like migration itself, a symptom, not a root cause. The underlying problem lies in the violent inequalities between the societies separated by the Mediterranean.

Most Europeans will probably never face that choice between leaving home or death and misery. But this dilemma weighs like a leaden shackle around the neck of every corpse floating in the ocean today. Just a stone’s throw from a place where—by some miraculous grace, and by historical tragedy—a small island of hope resides.