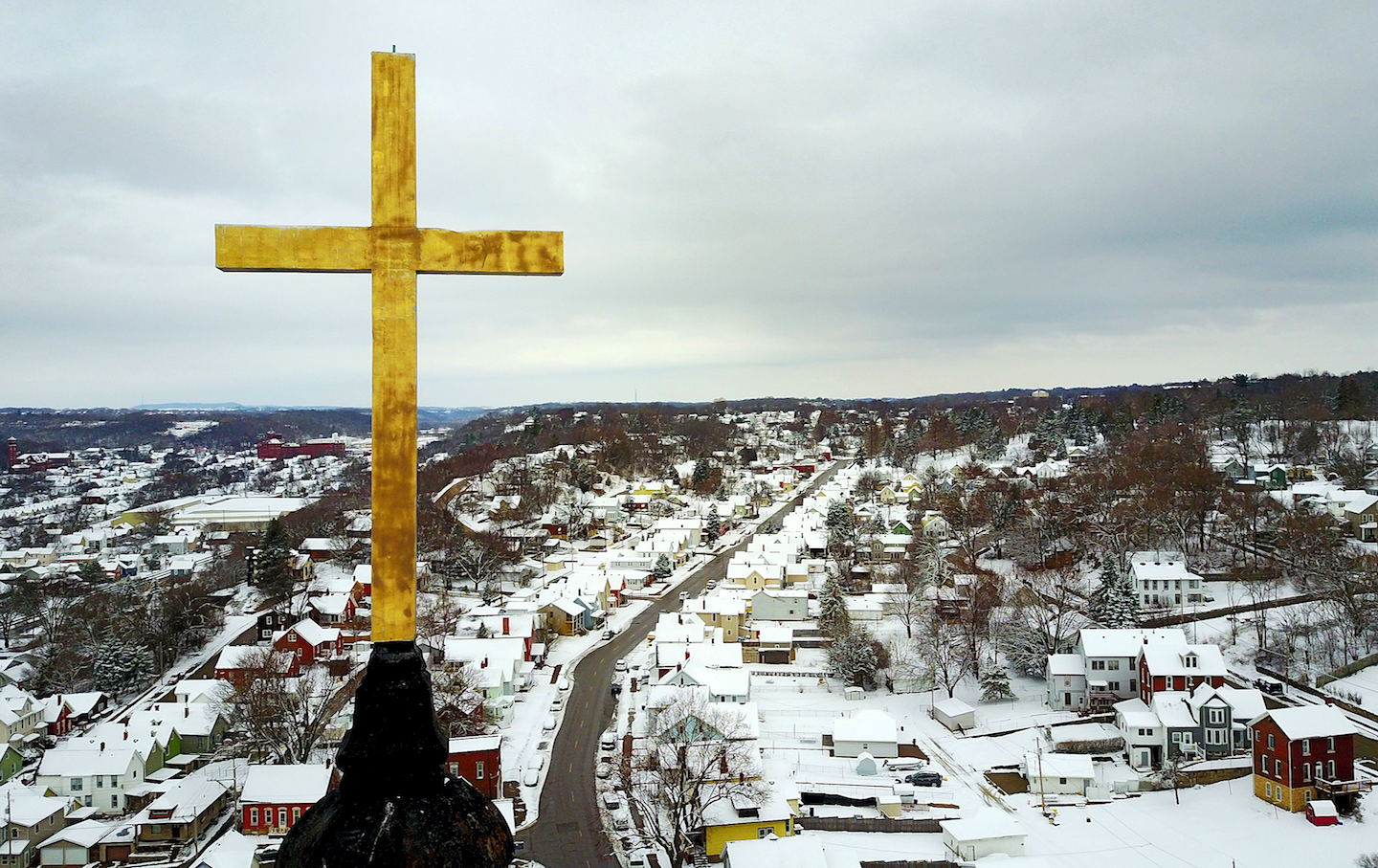 A year after Trump won the presidential election, Lenz moved out of her house in Iowa with her two small children and started over. She was raised in an evangelical household, and her faith shaped much of her life, as a child and an adult. Her ex-husband’s steadfast refusal to accept her much more liberal politics had been an incessant point of contention, and they left churches as quickly as they joined them, when Lenz realized that the people in charge had bigoted views or silenced women or had no interest in genuine, critical dialogue.2

In time, Lenz, a contributing editor for Columbia Journalism Review and a columnist for The Gazette in Cedar Rapids, watched as her life and her country seemed to parallel each other and fall apart together.3

From 2005 to 2017, the space in her marital relationship “grew and grew,” she writes, “stretching the limits of any compromise we were willing to make. It was a personal break that mirrored the national one. I had supported Hillary Clinton. He had voted for Donald Trump.” It became irreparable.4

All of that is really just a jumping-off point, however, for her new book, God Land, a collection of essays that mostly consists of her attending conferences, eating at potlucks, and learning about the struggling churches so integral to the region and the Iowan community she continues to live in. It’s a look at both those who are suffering under this current administration, like the farmers worrying about the effects of Trump’s trade war with China, and those who have been constantly thwarted—women, LGBTQ people, ethnic minorities—from discovering a place in their communities of faith.5

God Land, then, is almost a corrective project, an examination of what media observers can get wrong about belief and the heartland—two elements that are inextricable, and, consequently, often overlooked. It’s a study that examines the cliché of Middle America’s “bland passivity and unity,” as she puts it, and shows that the region is much more contradictory than the rest of the nation assumes.6

I spoke to Lenz about representation in Christianity, the perils of nostalgia, and what needs to happen for religion to save itself. Our conversation has been edited for length and clarity.7

Alex Norcia: I think that the media tends to approach religion as something esoteric or that editors simply tell themselves, because millennials are becoming less and less religious, there’s not much of a point reporting on it. Do you find people nonetheless drawn to these types of stories? 9

Lyz Lenz: I hope they are. At the time Indiana University Press contacted me about writing this book, I was trying to sell something different about womanhood and culture, and it was very religious. It had been out on the market, and my agent was getting responses back where the religious people were asking if I could write more like [religious blogger] Glennon Doyle Melton, and then the nonreligious publishers were saying that nobody cares about religion… This is in 2016, right before the election.10

Then I think there was a moment where publishers and the press had a kind of epiphany—that people do care. And it was never that people didn’t care. It’s just that faith is so finely woven into the very way we operate as Americans. You can’t escape it, but I think some people just don’t see it, because they don’t have to. But people who have grown up around it, we see it. One of my superskills is being able to walk into a coffee shop and immediately identify which people are having a Bible study.11

The main reason I wrote the book is because I wanted to find a way to talk about faith that wasn’t completely ignoring it but also wasn’t proselytizing.12

AN: You spend a great deal of time discussing representation in Christianity, how minorities and LGBTQ people and women are often pushed to the sides. Is there a place for them in church? 13

LL: People seem to be creating their own spaces. There’s still resistance. Are things changing? Yes, absolutely. Is that change slow? Yes, too. The pushback is very, very strong, and it feels like, in so many ways, the rest of the country has moved on from this conversation. Is gay marriage OK? There was a Supreme Court decision—all right, it’s fine. Now we can move on to trans people. And I don’t mean to suggest that this is all solved.14

I remember I was talking to a minister once, and he was saying that we need to have more of these conversations. And I got so mad at him because I didn’t understand why he still wanted to talk about this more. You are behind on gay marriage if you think we are just going to continue to sit and chat about your white, heterosexual feelings about queer people. People are definitely just moving on without them. And they should. That was my realization. I can’t be here debating religious men over whether or not they should listen to me for the rest of my life.15

AN: On a somewhat similar note, the mainstream press obviously tends to parachute into states like Iowa during a presidential election season, and obviously, during the last one there seemed to be a lapse in understanding. How can that get better?16

LL: I really liked a recent Michelle Goldberg opinion column in The New York Times about the “idiosyncrasies of Iowa voters” and [how they seem not to vote along ideological lines]. I don’t think that’s something people often say about opinion columns in The New York Times. What she had done was sit with people and listen to them and let them be complex human beings on the page without trying to draw some kind of lesson or condescend or make them caricatures. But, yes, I’m still seeing a lot of the same problems, and a lot of the same takes—like how this politician can’t speak to Middle America, only the white men can speak to Middle America. And that’s vastly misunderstanding the issues.17

AN: A theme that hovers over the book is the idea of nostalgia and the gaps we have in our conception of the past—like how churches, you write in the book, blew up “on the frontier in an effort to ‘tame’ wild lands” of the Native tribes that originally inhabited them. How can people’s thinking be changed and the past defined for what it actually was? Do you believe nostalgia is more dangerous or promising? 18

LL: It’s probably more dangerous. I see it now in liberal politics, where we’re talking about how great [Barack] Obama was—those perfect eight years when racism didn’t exist in America. He was a great president, but these problems didn’t just happen under Trump. They were happening for a long time. We were just able to ignore them. I hate to say I see it on both sides, because both-sider-ism is just disgusting, but it’s a human impulse. It’s a way of preventing you from reckoning with your past and your own complicity.19

AN: It exists everywhere online, too.20

LL: Oh, yeah, that’s another thing. “That bar in Brooklyn that we all went to and now it’s shut down”—that whole genre, it sucks. Now I’m going to get in trouble, but it does. [Laughs.] You can get that kind of stuff published in New York, but a church closing down out in the Midwest—they’re, like, “I’m sorry, what?” But this one bar where five people in media used to go to in their 20s and have drunk sex in the bathroom is an article.21

AN: Was there something you had to leave out that you wish you didn’t have to? 22

LL: I went on this rural Catholic life retreat, and that didn’t make it in. I had thought it was going to be like my experience around Baptist ministers—it would be this retreat where people go and talk about how to minister in rural places and the challenges facing their parishes. But there was none of that. There were a couple of nuns and some parish leaders, and we chatted about God and the Bible, and that was, like, it. We took walks and ate food and drank wine. I’m not complaining. It was a beautiful time. [Laughs.] But even when I was asking questions about how they engage in rural life, they essentially said that they just don’t. Most of my friends are liberal Catholics, and they really struggle with their Catholic identity and the way that Catholicism is practiced and preached. There seems to be a lot of cultural striving. Though among these conservative Catholics who I met, there just wasn’t. Which was so fascinating to me, because conservative evangelicals cannot stop talking about it.23

AN: In your piece “A Muscular Jesus,” you discuss football as akin to a religion and how it perpetuates a similar version of masculinity. Do you believe there are secular institutions replacing churches? Is it just a matter of time before they fully disappear? 24

LL: It’s so hard to say, because a majority of Americans still say that they believe in a God. And Christian faith is still, especially, a powerful force in this country. Anytime a take rings the death knell of religion in America, it fails to fully grapple with the realities of what’s occurring. So I’m always hesitant to say that one thing is going to replace this. There was an article recently in The Atlantic about how work was substituting religion, and I was like, “That’s vocational.” In other words, vocation is a part of faith. It’s not replacing religion. It’s, rather, an aspect of religion. Even these gyms, they come out of the same place. They reenact religion. The idea of physicality and spirituality has been around since the Romans. It’s very shortsighted to overlook that.25

What I think will happen, though, is that regressive and orthodox ideas about faith will always have a place in America. It will always be there. It will never go away.26