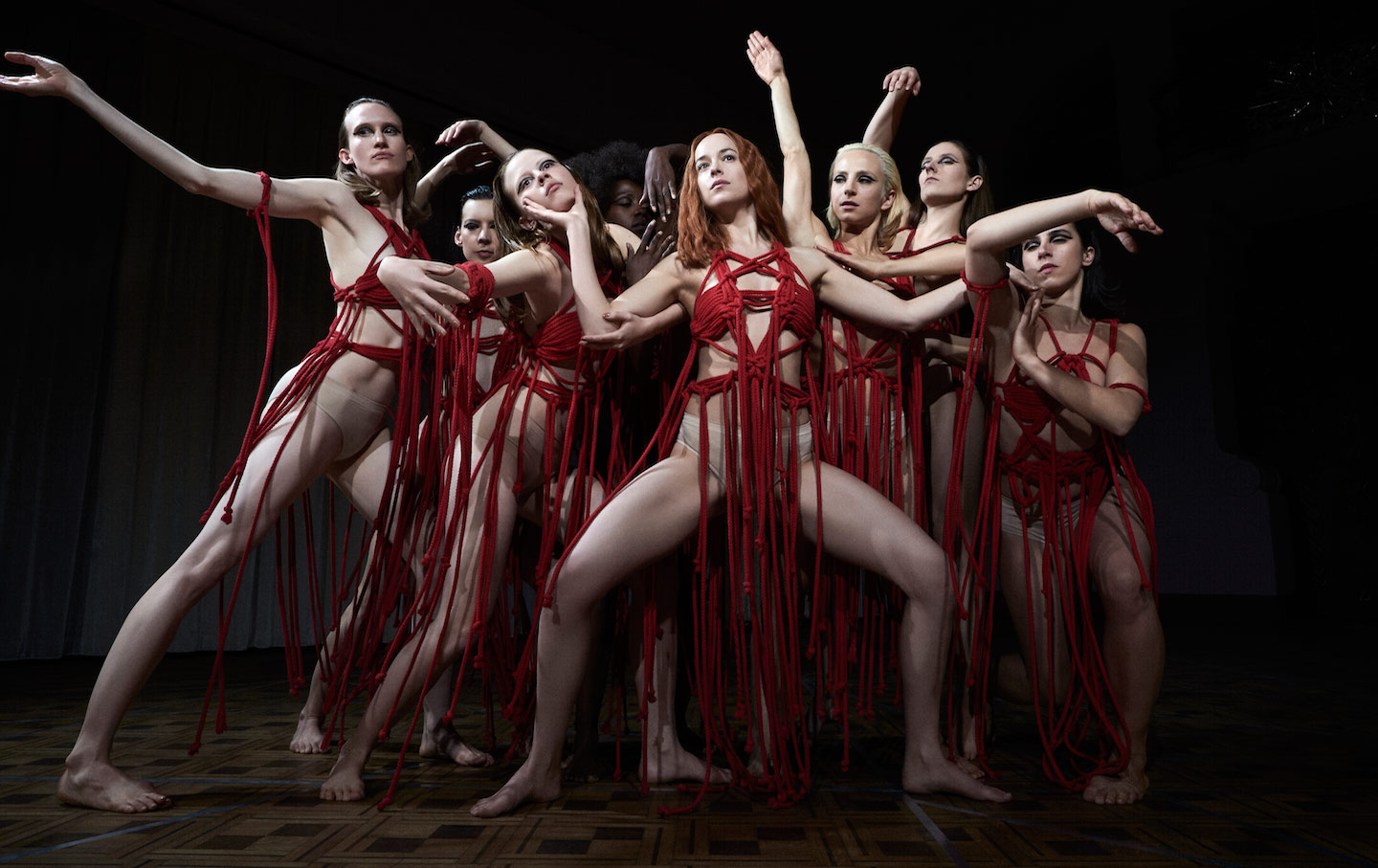 For many people, the new Suspiria will be a love-it-or-hate-it kind of film. It’s such a bold departure from Dario Argento’s 1977 original, which has not only a strong cult following to live up to but also its own vibrant visual language—one that has been mimicked in the horror genre for decades now. The 2018 Suspiria, helmed by Luca Guadagnino and written by David Kajganich, is unabashedly bonkers, taking the body horror of the original to an unsightly new level. If the blood runs pretty in the old Suspiria, it’s urine here that trickles down the legs of a painfully contorted ballerina. The original’s iconic theme by Goblin (playful and menacing, with its whispers of “witch!”) has been replaced with music by Radiohead’s Thom Yorke, who takes a more serious, orchestral, sometimes indie-rock approach, mostly erasing the campiness of his predecessor.

In fact, “remake” is something of an unfair label to begin with: Guadagnino’s version, while retaining the haunted-ballet-school narrative, attempts to do something completely different, placing the story firmly within the political climate of Cold War Germany. There are huge visual differences as well: While Argento’s Suspiria looked drenched in a fresh paint of coat, the red of the blood bordering on saccharine pink, Guadagnino does the opposite with his palette, making his film look as if it’s been through the washing machine a few times. When we first see the protagonist, wide-eyed ballerina hopeful Susie Bannion (played by Dakota Johnson), she’s cloaked in a muted scarf, the reds and blues of her outfit as faded as the decaying building behind her. Her gray sweatshirt, which she wears to rehearsals, camouflages her against the gray walls of the Markos Dance Academy, which acts as a front for a coven of witches (in fact, Fifty Shades of Grey—which Johnson also starred in—would make another apt title).

While Argento’s film is set in Freiburg, Guadagnino’s vision is informed by the turmoil of Berlin in 1977, with a hue closer to the films of Rainer Werner Fassbinder, the better to encompass the anxieties of the “German Autumn.” The Berlin Wall is on prominent display outside the academy, and political unrest lingers at the film’s core—appearing in messy spurts in the form of Red Army Faction intrigue and sexist therapists who are quick to call women delusional (particularly one Dr. Josef Klemperer, played by Tilda Swinton in prosthetic makeup). So many of the film’s decisions were based on this grim aesthetic, yet this specific new setting overcomplicates the story, burdening it with too much upheaval buzzing around the central plot, when the tension could have been better focused on the peril facing the women at the school.

This fragmented backdrop becomes integral to every aspect of the new Suspiria: Deep inside the dance academy, the coven is split over its leadership, mirroring the divisions happening in Berlin itself. Meanwhile, our main character brings the baggage of her chaste Mennonite Ohio upbringing, which conflicts with her desire to use her body, in all its writhing, exposed glory, for artistic expression.

In her first big dance scene, Susie performs a piece choreographed by the school’s director, Madame Blanc (Swinton again, in the second of several roles), who is as pale and stern as her name suggests. Afterward, Susie tells Madame Blanc that dancing the piece “felt like what it must feel like to fuck.” The line, so brash and unexpected, feels almost comical—and after such a serious scene, the levity can feel like whiplash. This is also, curiously, one of the only mentions of sex; for a film throbbing with such erotic tension, Suspiria largely eschews a sexual awakening for its sheltered protagonist. In many ways, while the movie is unafraid to show the extremities that a body can undergo, it lacks the flipside of pain: desire. It can be argued that Guadagnino’s celebrated earlier film, Call Me by Your Name, also lacked a certain passion when it should have been brimming with it, the camera too eager to pan away from the fornication. Likewise, in Suspiria, the passion is cold—its idea of a good time is some cackling witches threatening a man’s genitals with a sharp hook.

This being a ballet school, of course there are many mirrors, but Guadagnino uses them, perhaps inadvertently, to reveal something beyond mere reflection. He does interesting, if confusing, things with them during the conversations between Susie and her classmate Sara (Mia Goth). He first shows Sara’s reflection in focus with Susie’s out of focus; later, both reflections are obscured in the mirror’s surface. Perhaps Guadagnino is hinting at the melding of their positions (before Susie eventually usurps Sara’s place as the faculty’s favorite student), but it’s also possible there isn’t much purpose here beyond visual flair, something this film—with its quick zooms and pans that feel dizzyingly balletic—has in abundance. But while mirrors make for great metaphors (and convenient psychoanalytic readings), the film’s too-often-clumsy use of them can feel as superficial as a funhouse.

This extends to the dance academy’s warped treatment of the female body. The academy is a safe haven from the outside world’s oppression, offering financial and artistic freedom to its students, but it also brutally destroys the bodies of those who do not conform. After falling out of favor with the faculty, one student, Olga, becomes a victim of this treatment, as she is physically torn apart during the aforementioned dance by Susie. Touched with some kind of hexing power by Madame Blanc, Susie enters a violent trance while Olga’s body involuntarily echoes her movements in a nearby dance room surrounded (you guessed it) by mirrors. Not only does she literally break apart—bones jutting out, skin stretched and contorted to the point where you see guts bursting through the seams—but she must watch herself fall apart from every angle.

Guadagnino is a captivating and stylish filmmaker: Suspiria’s cavalcade of grotesquery is expertly shot (the notable exception being its ugly, chaotic climax), and the sullen atmosphere of its world is richly rendered. All of this makes the love-it-or-hate-it question somewhat difficult to answer. For those inclined to overlook its narrative failings, Suspiria will qualify as art-house horror done right. But it’s hard to ignore how confused this movie is: It feels like a grab bag of different tropes—innocent girls corrupted, witchy machinations, and the like—haphazardly strung together. Suspiria remains an interesting watch in spite of this, and its study of the disturbed psyche is, at the very least, memorable. Yet, for such a woman-focused film, its actual interest in the lived experience of women’s pain is shallow. Even if no one expected this version of Suspiria to be an empowering feminist update, it feels as timid and askew as Call My by Your Name when it comes to confronting the realities of sex. In the end, given its strengths, it’s impossible not to wonder if Guadagnino and his collaborators simply lacked the vision and point of view to take their film to the next level.