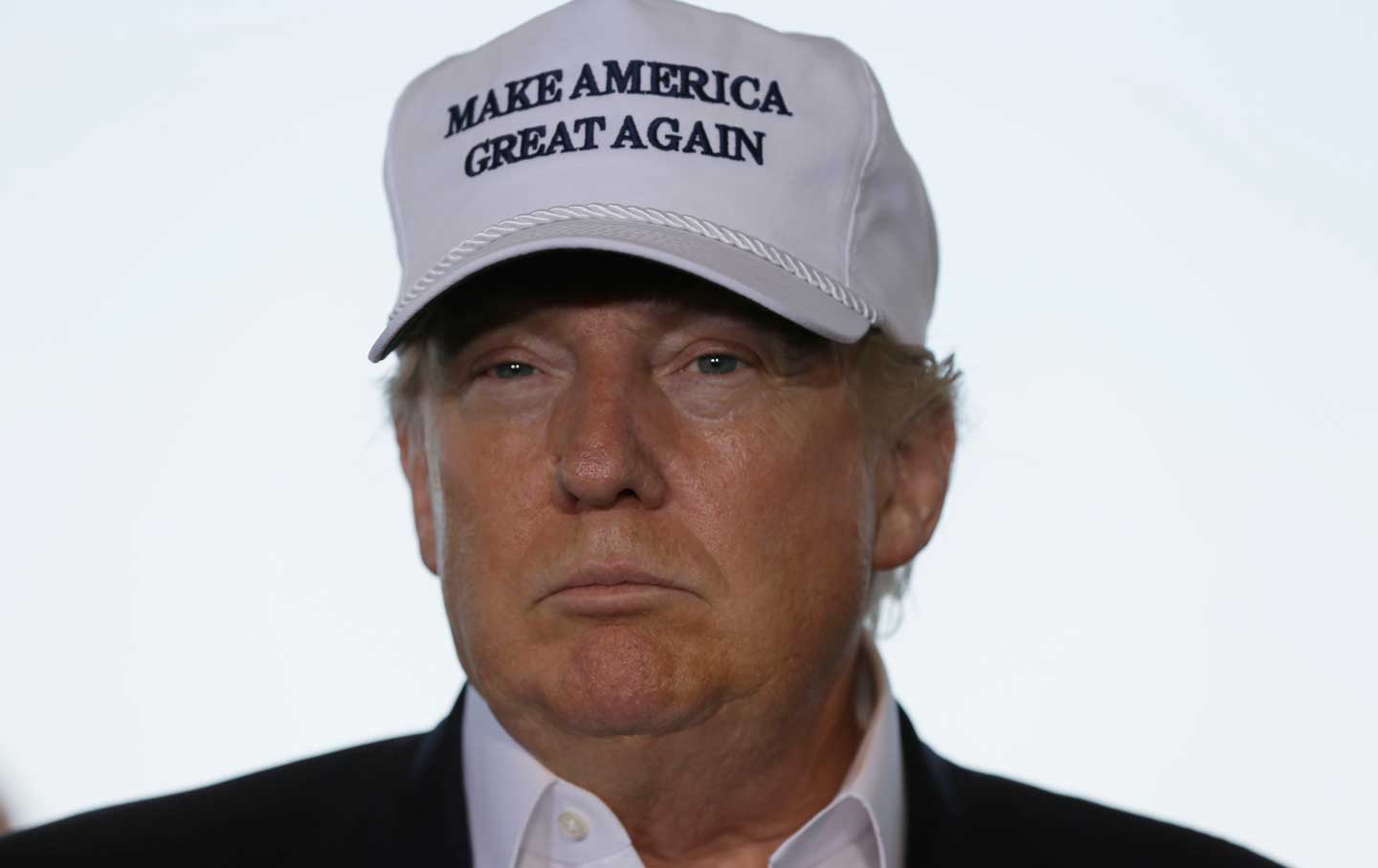 “It’s great to be here at Saturday Night Live, but I’ll be completely honest,” Donald Trump said when he first hosted SNL in 2004, during the smash first season of The Apprentice. “It’s even better for Saturday Night Live that I’m here.… I’m a ratings machine.”

That machine will be in overdrive when Trump again hosts SNL, on November 7. But this time, it will surely be better for the GOP presidential front-runner than for SNL. No matter how much he jacks up their ratings, no matter how much the SNL writers wave Sarah Palin’s scalp at the man who cannot be scalped, it’s Donald Trump who stands to benefit.

It was only in June that NBC and parent company Comcast (as well as Macy’s, ESPN, NASCAR, and other companies) took the bold step of cutting ties with Trump for, essentially, calling Mexicans rapists, criminals and drug dealers. Just appearing on NBC’s liberalish SNL will vet him as, if nothing else, Not Too Racist for Prime Time.

Letting Trump host “will legitimize and validate his anti-Latino comments,” the National Hispanic Leadership Agenda, a coalition of 40 Hispanic organizations, wrote in letter to SNL executive producer Lorne Michaels and NBCUniversal CEO Stephen Burke on Oct. 15. “NHLA had praised NBCUniversal, when it severed its ties with Donald Trump,” it read. “We are appalled that you would enable Trump’s hateful speech for nothing less than a ratings ploy and ask that you rescind the SNL invitation.”

Even Shep Smith on Fox News got into it. “Nice job, NBC,” Smith said. “You made a stand! You stood for your values! You did what you must! Forget the money, no more Trump, except… more Trump! You did a great job. We’re all proud of you, NBC.”

To make matters worse, SNL‘s commitment to diversity has always been laughable. In its 41 years on the air, the show has had only two Latino cast members—Horatio Sans and Fred Armisen (whose mother is Venezuelan)—and not one Latina. In 2014, SNL was shamed into hiring its first black female cast member since 2007. They now have two. As for Asian Americans, Margaret Cho says, “People come at me and say, ‘Oh, Fred Armisen is a quarter Japanese, Rob Schneider is half Filipino.’ Yeah, that makes three-quarters of an Asian American” in 41 years.

On the House floor on Wednesday, Representative Luis Gutierrez (D–IL) called Trump’s presidential run the “Make America Hate Again Campaign,” and asked what if, to protest his host gig, “all the Latino cast members all walked off the job at Saturday Night Live? Oh, wait—you don’t have any Latino cast members.”

“I haven’t been kidnapped by the politically correct police,” he added, “but when public figures cross certain lines they should lose their privileges to host TV shows at least until they’ve apologized for their unacceptable behavior.”

“If Donald Trump had said gays and lesbians were murderers and raping Americans, would he get to host the show?” Gutierrez continued. “What if he said black people were murderers, rapists and drug-dealers, would you still pitch skits with Donald Trump in some lighthearted banter?”

In fact, would Lorne Michaels have given Trump the host spot if Trump were now at the height of his birther rage, obsessing that the president may be African instead of American? I’m going to bet he wouldn’t. But it’s a moot point. The media, titillated by his spectacular rise in the polls, have conveniently forgotten about Trump’s sick birtherism, and he refuses to talk about it—though, tellingly, he won’t disown it.

As of late Friday a MoveOn petition petition asking that NBC dump Trump had garnered about 140,000 signatures; the hashtag campaigns #snldumptrump and #racismisntfunny were going strong; Michaels and Burke still hadn’t responded to the NHFA letter; and NBC still wasn’t commenting about the SNL brouhaha.

But Trump did, and in his usual way—by projecting his own motivations onto his opponents. “Those groups are looking to fundraise, I know all about those groups,” Trump said on Fox & Friends. And he repeated this canard: “I’m leading in the polls with the Hispanics. I mean, you look at Nevada, I’m leading in the polls.” (That’s a lie, by the way, that the press doesn’t emphasize: the Nevada poll included only 35 Hispanic Republicans; in a subsequent NBC poll, including 250 Hispanics, 14 percent viewed Trump negatively and 61 percent very negatively.)

So what to do? While there aren’t any Latino cast members to walk off the job on November 7, others can. It’s happened before. In 1990  cast member Nora Dunn and singer Sinead O’Connor refused to appear on the show with major sexist host Andrew Dice Clay, as Felix Sanchez, co-chair of the NHFA, reminds us. Other options, Sanchez says,  include staging protests the night of the broadcast, and calling for boycotts of the show, the network, and/or the sponsors.

Some Trump critics, while hating what he stands for, don’t see a big difference between SNL letting Trump host than Jimmy Fallon or Stephen Colbert having him on as a guest. But in those cases someone is actually interviewing Trump, however gently or harshly. On SNL, the terribly thin-skinned mogul will have to approve of the skits.  And SNL has a long history of making their political-candidate guests, from Hillary Clinton to Rudy Guiliani, look good, humanizing them or making them seem lovably zany, as the case may be. It’s worth remembering that Tina Fey’s impersonation of Sarah Palin did its dirty work long before Palin appeared live on the show—which she did in part to mitigate the damage.

But maybe I’m too cynical. Maybe SNL will rise to the occasion and dig at more than the easy targets of Trump’s hair and narcissism.

“Let’s wait and see what he does on the show before we leap to an opinion,” one industry insider told me. “Given the cultural conversation going on in this country right now, it seems to me that Lorne Michaels he has every right to book him.

“How do you know Lorne isn’t going to shine a spotlight on Trump, and the more opportunity he has to [look awful], the more people are going to dislike him? He might come off as a total buffoon.”

Problem is, looking like a buffoon has so far only strengthened Trump. And to date, only two people have ever made him wither in public. Obama at the White House Correspondents Dinner in 2011, and Carly Fiorina at the second GOP debate.

Maybe Donald will let SNL goof on his relationship to women—that’s cute!—or maybe even venture a Megyn Kelly skit. But would they ever do a meaningful spoof of his birther thing, his Latino thing, or anything having to do at all with racism?

If they did, the guy who insists that he doesn’t have a racist bone in his body might decide to boycott SNL.