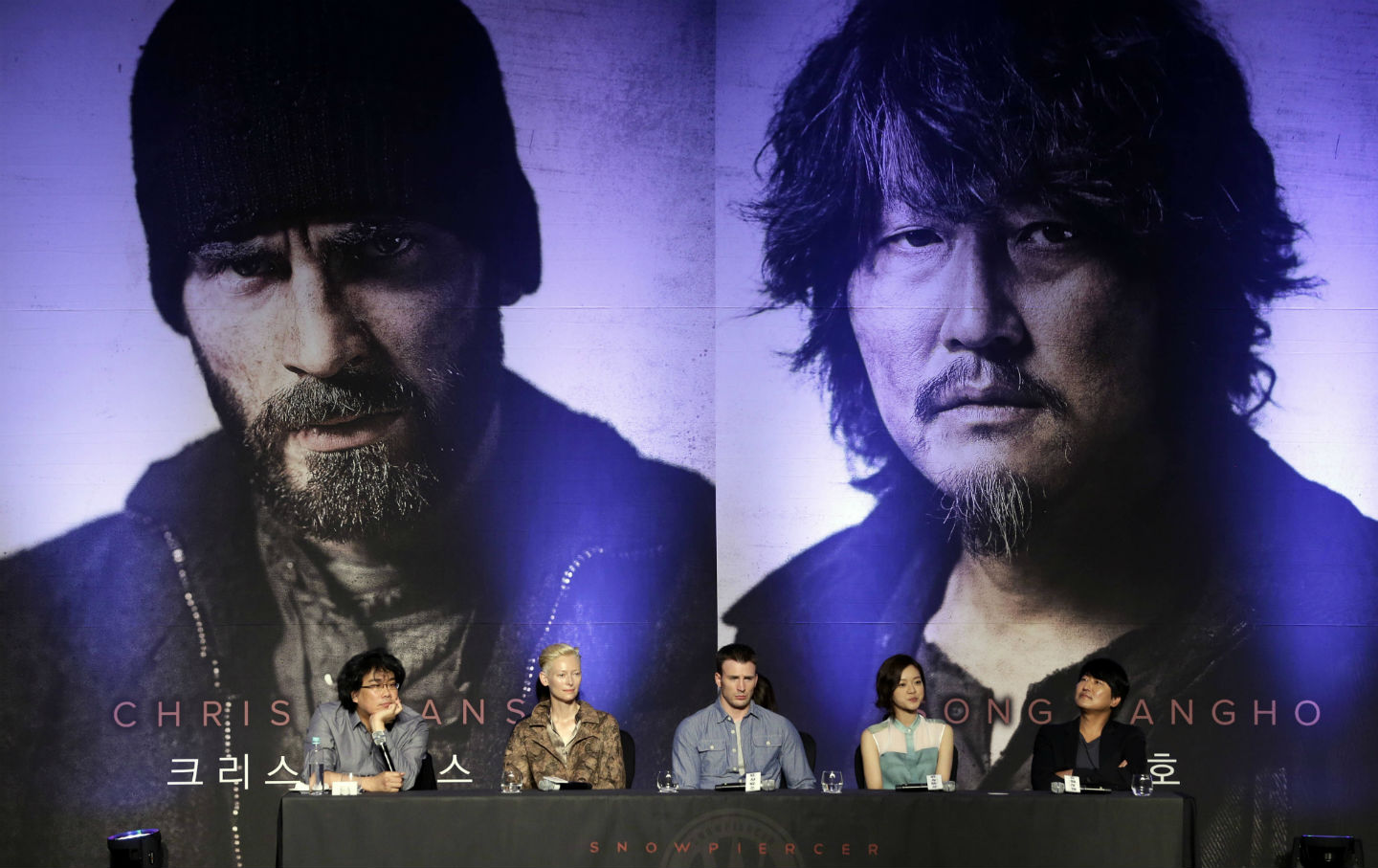 Now that awards season has had its way with us, we might revisit the year’s two finest movies. They ask a fundamental question: Would a struggle for real emancipation aim to make use of the world as it is, its purposeful objects and systems? The material of history includes both things (like factories and infrastructure) and relations (the arrangement of society). What do we do, what can we do, with the stuff that not only makes up and maintains the world we would like to leave, but is designed to do so?

The two films, you will have surely deduced, are The Lego Movie and Snowpiercer. “Everything is awesome!” goes the former’s theme song. “Everything is cool when you’re part of a team.” The chirruping glossy pop screams irony. Minifig hero Emmit’s integration into an energetic construction crew is neither awesome nor cool. It’s just labor. The movie knows we know that no work is happy in the world of compulsory productivity, however caffeine-fueled and candy-colored.

Despite a few missteps, The Lego Movie largely abjures heroic individualism as antidote. The destruction of villainous Lord Business will also require a team. The song turns out not to be ironic at all: everything is awesome, as long as your team is devoted to the abolition of order itself.

Order! That’s the keyword, and Legos provide an ideal metaphor. Purportedly designed for the builder’s infinite creativity, they instead force themselves into -orthogonal forms, efficient, orderly. Pretending at play, Legos have always been all business. This contradiction proves generative. A series of delightfully kinetic sequences conjure the basic inquiry: Can our team “repurpose” the building blocks of corporate dystopia into something else entirely, against their own inner logic, their desire to be locked into place?

The movie thinks yes. It’s a Lego/Hollywood collaboration after all. Yet it begs us to see the underlying no, to recognize how the purpose-built efficiencies in our means of making things are never neutral, but contain their own drab demands. They work some ways and not others; they -require that we work some ways and not others. They make a world for highly productive teams that whistle while they work, having internalized play and creativity into the very essence of their drudgery. How very modern. But at least the question is raised.

It is raised differently in Snowpiercer, Bong Joon-ho’s own dystopic fantasia. Drawn from a French graphic novel, it narrates a single train circling the globe ceaselessly, bearing through a man-made ice age all that remains of humanity. Theorist Dipesh Chakrabarty has influentially suggested climate collapse signals the end of class politics (“Unlike in the crises of capitalism, there are no lifeboats here for the rich and the privileged”); Snowpiercer makes a mockery of such delusions. The de facto lifeboat of humanity is brutally class-divided, per the ready-made metaphors of travel. They are arranged, that is, according to their command over the train’s power source: a nearly perfected mechanism that cranks out humanity’s needs while driving itself forward. You say engine, I say means of production. Again, the metaphor does not mean to be opaque. The film follows the course of class war, as the rear’s residents fight their way forward to seize the engine.

Thanks, Obama! But this is not the renascent socialism of Norma Rae or Reds. At the rear is not an exploited working class; it’s closer to what social scientists call “surplus population.” The engine, superintended by Wilford the Engineer, is production grown so technologically efficient it scarcely requires labor. It’s wearing down, however, and so requires some minimal amount, culled from the surplus. The remainder have nothing to lose but their lives; no job, no wage, no compact between labor and capital can pacify them. Between the train’s classes, no relation but force.

We track the narrative car by car, mimicking game play. It’s claustrophobic, straitened in both space and ambience. Methods and costs of reproduction recur at each moment, from the cockroach-protein fed the lumpen, to the ideological lessons provided the laughing children of the laughing class. Eventually we arrive at the level of the whole. We discover periodic insurrection is baked into the system, population control toward the great equilibrium of resource management conditioned by humanity’s crisis. When the surviving rebels arrive at the front, it’s all according to plan. Wilford admits he is done for, exhausted, and offers to yield command to the proletarian emissary, Curtis. “The train is the world…and now you have the sacred responsibility to lead all of humanity. Without you, Curtis, humanity will cease to exist. You’ve seen what people do without leadership.”

I have left much out of the telling. For all that, it is on this razor’s edge that the story balances. Many will recognize this as the inflection point of revolutionary theory. It is a version of the Lego question, or the Lenin question, one and the same: Can the stuff of class domination be repurposed for some emancipatory system? Can you seize the means of production, seize the state, reproduce the world but now under different control, and promise an eventual withering away? Or is a kind of domination built into the engine, bound to reproduce itself alongside our necessities?

Snowpiercer takes this question seriously. It thinks the immense seduction of seizing the engine must be refused, that in choosing to seize the engine, the engine chooses for us. In return for survival we get unfreedom. The film does not suppose there is an easy answer to how we will survive; it suggests, ambiguously, that even if we blow the doors and bid the engine farewell, we may be instantly consumed. Maybe so, maybe so. Only one way to find out.