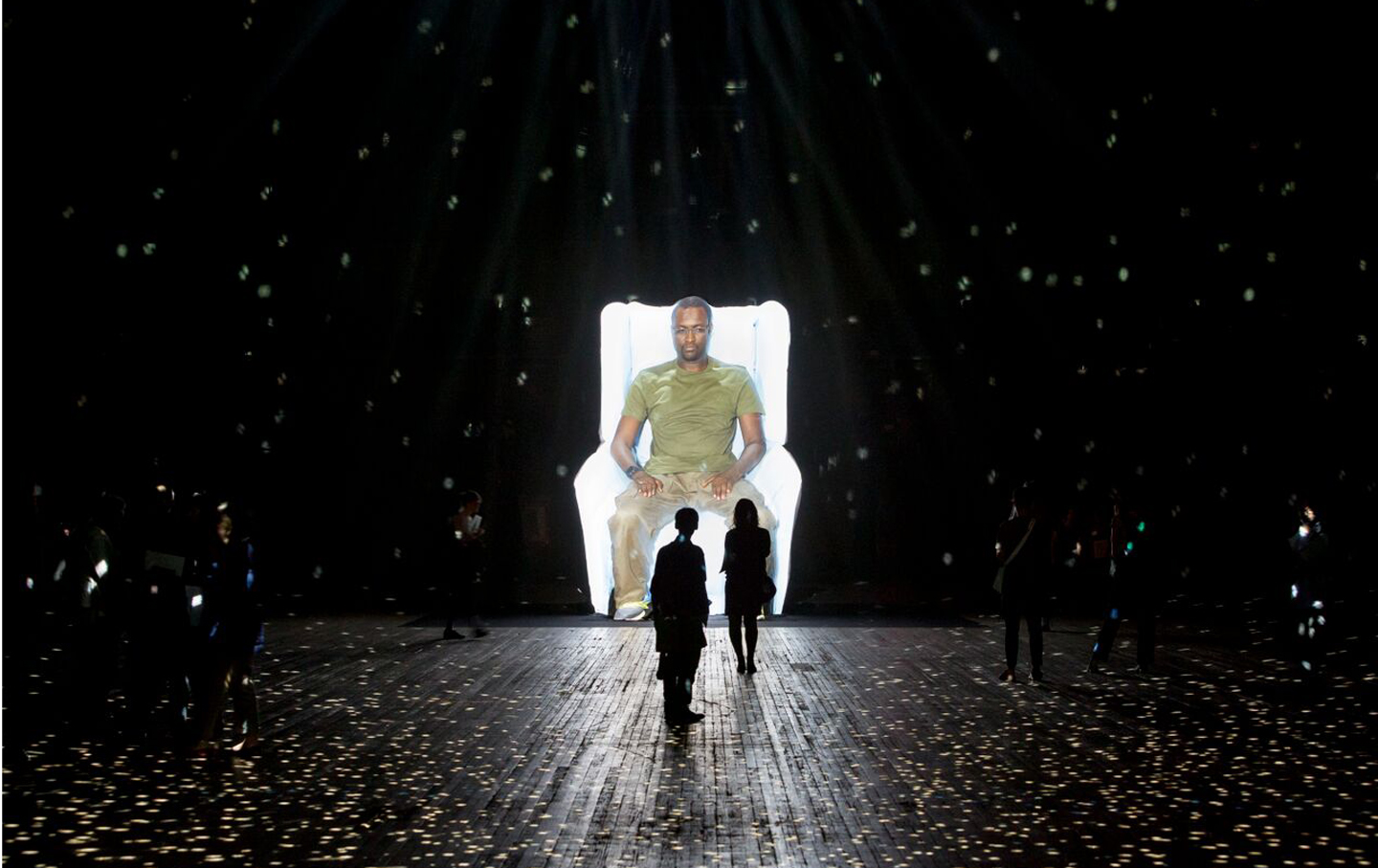 The drill hall at the Park Avenue Armory is lit up like an observatory. A fixed mirror-ball reflects beams from eight different spotlights into a galaxy of stars on the ceiling of the massive hangar. The effect is almost oppressive, like a big sky in summer.

On one end of the room is a plaster statute, a cast of a body in an armchair, inspired by the Lincoln Memorial and almost as big. Projected onto the cast is the full-body image of Mohammed el-Gharani, a former Guantánamo Bay detainee who was captured in Pakistan at age 14, held for seven years, and released in 2009. Though he was never charged with a crime, he can’t come to the United States, so his image is being livestreamed from a studio in West Africa, where he now lives. Gharani—in khakis, a green T-shirt, wire-rim glasses, and running shoes with neon-green laces—alternates between looking forward, stone-faced, and smirking to someone off camera we can’t see.

The statue is the main element of Habeas Corpus, the latest installation from multimedia artist Laurie Anderson. Her work has long explored themes of prison and removal from society, including a 1998 exhibition in which she projected the image of a prisoner from Milan’s San Vittore prison onto a statue in the Fondazione Prada. After she failed to secure permission to do a similar project with prisoners in the United States, a staff attorney at Reprieve, a human-rights group, introduced Anderson to Gharani.

From October 2 to 4, for seven hours a day, Gharani’s image was beamed live to the exhibit on New York City’s Upper East Side. The work is filled with contradictions. In a piece for The New Yorker, Anderson describes Habeas Corpus as “a work of equally balanced presence and absence”—Gharani is both there and not there at the same time. That’s a condition of prisoners broadly, but it’s especially true of detainees at Guantánamo Bay.

A droning guitar playing over the loudspeaker goes quiet, and the man we’re looking at disappears, leaving only the blank statue in its place. It’s time for the real Gharani, half a world away, to take a scheduled break from the performance. From where we stand, though, his image, this time pre-recorded, reappears immediately, reanimating the statue.

“When they built Camp 5 we were living in containers, and then they built a real building with cement,” his pre-recorded image says. “They moved about 100 people and I was among them. So the first day, the interrogator came and told me, ‘You see, this is a real building and we built this for people who are coming to stay here forever and you are one of them.’” During each day of the exhibition, recordings of Gharani recounting his time at Guantanmo played during these periodic breaks. Otherwise, he sat motionless from noon to 7 pm. As we watch Gharani’s projection, we are watching a human being who is confined (voluntarily, of course) to the position of a statue. Gharani is re-imprisoning himself, briefly, to show us his freedom. The result is an unsettling reminder of how tenuous the division between those two opposites can be.

Fourteen years after 9/11, the United States still suffers from the many sins of George W Bush, Dick Cheney, and their co-conspirators. Arguably, President Obama’s greatest mistake in office was to effectively immunize the previous administration from any official accountability, thus shifting the burden from the government to civil society to reckon with the crimes committed by the US during the “Global War on Terror.” In the absence of criminal trials for top policy makers—or a comprehensive truth and reconciliation commission—artists, activists, journalists, and human-rights advocates have been forced to tell the stories that both the Bush and Obama administrations would rather ignore.

For those reasons, Habeas Corpus is a wholly necessary work of art; as is a recent documentary about Omar Khadr, another child held at Guantánamo; as is the recent autobiography of Mohamedou Ould Slahi, who is still imprisoned on the island. And yet, what art cannot do is ensure that GWOT-era crimes won’t happen again.

Even now, indefinite detention without charge or trial remains a feature of Guantánamo. The US government continues to insist that a subset of the prisoner population there, sometimes called the “forever prisoners,” are too dangerous to release but impossible to charge with a crime because of a lack of usable evidence. Tellingly, a recently implemented parole-style process has determined that of the 15 detainees who had previously been ruled too dangerous to release who have gone before the board, 13 are no longer national security threats to the United States—which means they’re moved to the “cleared for transfer” category. The development was first noted by law professor Steve Vladeck at the human-rights blog Just Security, and suggests that indefinite detention is not only a human-rights violation but often doesn’t even serve the very pretext used to justify it.

There are currently 114 detainees held at Guantánamo, 53 who have been cleared for release. Twenty-nine are listed as forever prisoners.

Just a few days before Habeas Corpus opened, Republicans in Congress announced their latest attempt to make closing the prison all but impossible. Newly proposed provisions in an annual defense bill include language that requires the secretary of defense to affirmatively state that transfers actually promote the US national security interest, a much stricter standard than what’s on the books now. As the law stands currently, the secretary must pledge that the United States has mitigated any threats the transfer might pose. The new requirements, if enacted, would likely cripple the already stumbling progress that has been made toward emptying the prison.

The Obama administration’s timidity and Congress’s intransigence highlights the irrational fear around Guantánamo that still grips the nation. Gharani, for his part, is no stranger to that phenomenon. “One of the brothers told an interrogator he had a dream—you know we were just close to the sea—he had a dream that a submarine is coming and taking us away from Guantánamo like an escape,” Gharani recalls in one of the taped stories. “The same day he told them that, in the evening, we saw lots of helicopters, a lot of lights in the sea. They believed it.”