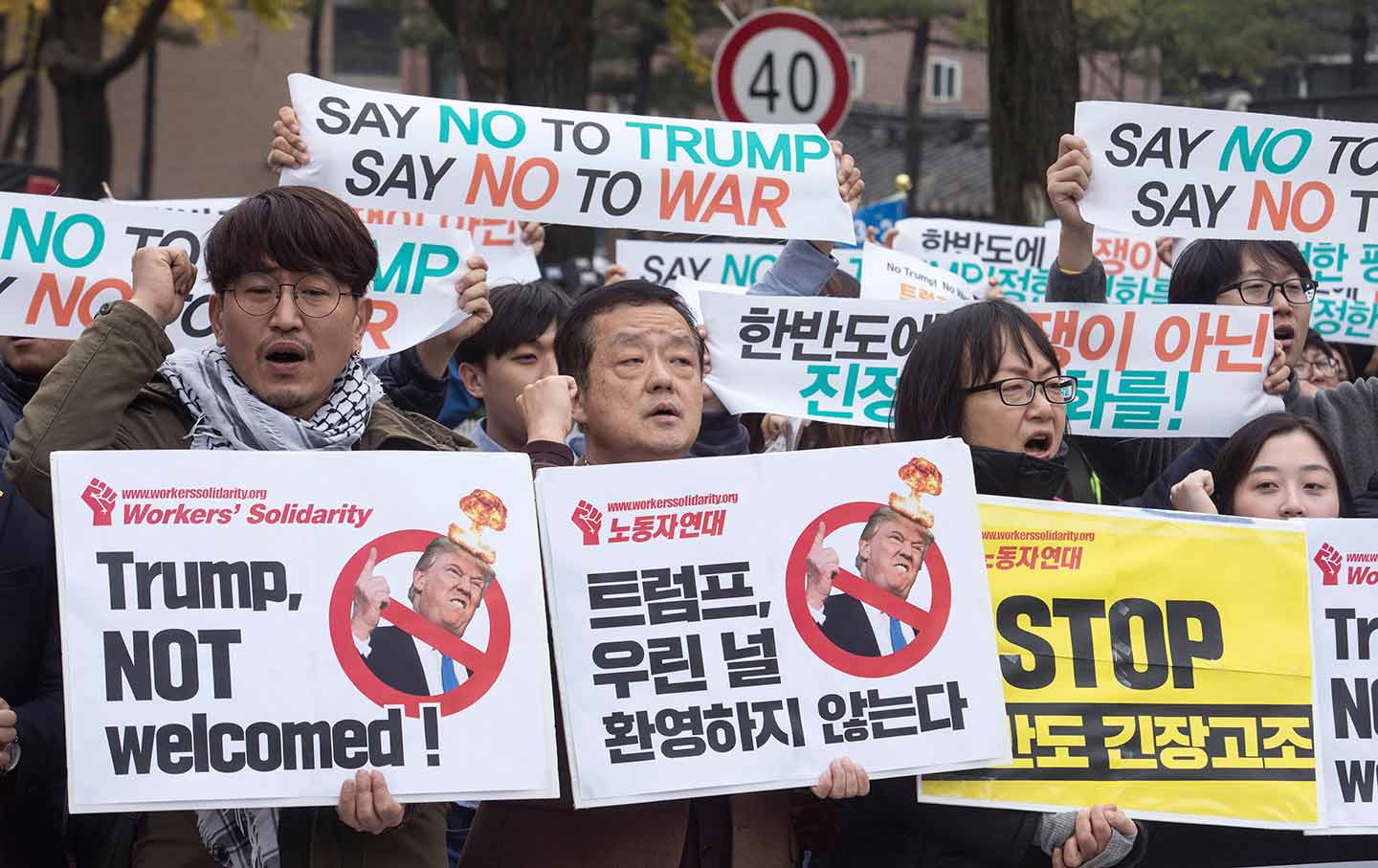 Even before President Trump arrived Monday night at Osan Airbase in South Korea for the second stop on his five-nation tour of East Asia, thousands of Koreans fearing another war had flooded the streets in eight Korean cities to tell the militaristic president to go home.

The unpopular leader may have gotten the message: In his first public remarks in Seoul, Trump made sure to emphasize his interest in negotiating an agreement with Kim Jong-un over his nuclear-weapons program. “It makes sense for North Korea to come to the table and make a deal that is good for the people of North Korea and for the world,” Trump declared at a news conference. “I do see certain movement.”

Koreans, however, see movement toward war. The protests peaked over the weekend in Seoul, where a coalition of antiwar, trade-union, and civil-society groups organized a “No Trump, No War National Rally” that ended with a march to the US embassy. They demanded that Trump stop his war threats against the North and end the massive military exercises the Pentagon holds with South Korea twice a year.

“We’re opposed to this visit to South Korea by Trump, who is inciting a crisis of war on the Korean Peninsula.” —South Korean antiwar coalition

“We’re opposed to this visit to South Korea by Trump, who is inciting a crisis of war on the Korean Peninsula,” members of the coalition declared in a press conference Saturday in front of the embassy. “I hope that American citizens pay attention to what’s happening here,” Kim Hyun-a, a teacher attending the protest with her students, told The Washington Post. “War brings tragedy.”

Hundreds more were in the streets when Trump arrived. But the antiwar demonstrators—who vastly outnumbered a crowd of right-wing, pro-Trump Koreans the Post felt compelled to highlight—were met by the largest mobilization of police since President Moon Jae-in came to power last May (during the visit, most anti-Trump actions were banned, and the huge police presence could be seen live on CNN and other networks broadcasting from Seoul).

Moon is the progressive politician who once visited North Korea during the brief period of détente in 2007 and was elected on a wave of citizen power known as the “candlelight revolution” (see his May interview with The Nation here). Unlike Trump, Moon has emphasized dialogue and engagement as a way to defuse tensions with Pyongyang. And he has continually warned against the dangers of a war and cautioned the United States not to take military action without South Korean involvement and approval.

Moon Jae-in has disappointed many of his followers by endorsing Trump’s matrix of intensified sanctions and unprecedented military pressure against the North.

But as the crisis on the peninsula has deepened with North Korea’s stream of missile and nuclear tests and the Pentagon’s retaliatory flights of B1-B bombers and F-35 fighter jets into Korean airspace, Moon has disappointed many of his followers by endorsing Trump’s matrix of intensified sanctions and unprecedented military pressure to push the North to give up its nuclear ambitions. He further endeared himself to Trump on Tuesday morning when he made a surprise visit to US Army Garrison Humphreys to welcome the president (when USAG’s expansion is completed in 2020, it will be the largest American military base in the world).

Today “marks the first time the two presidents of South Korea and the United States have come together to a U.S. military base in South Korea to encourage their troops,” Moon declared at a lunch for Trump and South Korean and US soldiers, according to Yonhap News. No fewer than three US aircraft carriers were in the region as Trump touched down, and over the weekend the Pentagon ordered B1-B Lancer bombers stationed in Guam to make another sweep through Korean skies before Trump arrived (“we hope to God we never have to use” these weapons, Trump said in Seoul).

These actions have touched off strong criticism of Moon’s support for the US president. “The current U.S.-South Korea alliance is based on South Korea’s subordination and is a war alliance that is far too dangerous,” Kim Chang-han of the Minjung (“Peoples”) Party, which was formed to oppose Moon’s ruling Democratic Party, declared at the Seoul rally, according to Zoom in Korea, a progressive news site.

Is the United States Planning to Attack North Korea?

In solidarity on Monday, several hundred US, Korean, and Japanese civil-society organizations released a joint statement “calling upon their governments to avert war with North Korea through policies that could lead to regional peace,” according to Korean-American activist Christine Ahn.

The dangers confronting the peninsula were underscored in Washington in the weeks leading up to Trump’s departure for Asia (he is also visiting Japan, China, and the Philippines). Over the past month, Trump’s national security adviser H.R. McMaster has underscored the administration’s tepid interest in diplomacy by threatening military action to stop North Korea’s nuclear program.

Trump “is not going to permit this rogue regime, Kim Jong-un, to threaten the United States with a nuclear weapon” and is willing “to do anything necessary to prevent that from happening,” McMaster recently told Fox News. He pushed that line even further in a November 3 interview with Japanese broadcaster NHK. “If necessary, [Trump’s] prepared to use military force,” McMaster said. “They really have no other option but to denuclearize.”

Last weekend, the Pentagon revealed the enormous stakes involved when it informed Congress that nothing less than a US “ground invasion” could locate and secure all of North Korea’s nuclear weapons and prevent them from being used.

But McMaster and Trump have not been telling the full story of what a war to end Kim’s nuclear forces would entail. Last weekend, the Pentagon revealed the enormous stakes involved when it informed two members of Congress that nothing less than a US ground invasion could locate and secure all of North Korea’s nuclear weapons and prevent them from being used. (To my knowledge, that’s the first time the term “ground invasion” has been used in the context of Korea since 1953.)

A few days earlier, the Congressional Research Service delved deep into the true costs of war, predicting that “tens of thousands” of people in South Korea could die from North Korean artillery in just the first hours of a conflict. “A protracted conflict—particularly one in which North Korea uses its nuclear, biological, or chemical weapons—could cause enormous casualties on a greater scale, and might expand to include Japan and U.S. territories in the region,” CRS said.

In any case, the drift toward war has definitely captured the attention of peace and disarmament activists in Washington. On Monday, Joseph Cirincione, president of the Ploughshares Fund and a former adviser to Secretary of State John Kerry, burst into anger at the tail end of an otherwise quiet discussion on North Korea’s nuclear capabilities at the Cato Institute, a libertarian think tank.

“If you don’t pay attention, we will go to war,” he warned, pointing to the predictions from top military experts in The New York Times on Sunday that the chances of a US war with North Korea are between 30 and 50 percent. “You can feel the winds of war in this town right now,” he said. Worse, chances are high—some say 10 percent—that a war would not be restricted to conventional weapons. “I don’t know why it wouldn’t go nuclear,” he said. In terms of casualties, “we’re talking Korean War, World War II” levels.

New legislation introduced by Representative John Conyers Jr. and Senator Ed Markey, which has 60 co-signers, would require congressional approval for any military strike on North Korea.

Like many observers, Cirincione argued that Trump’s aggressive actions and fiery statements—particularly his threat to “totally destroy North Korea”—have pushed the situation to a breaking point and given the American people false hopes that an air war against North Korea would succeed. “We’ve been living in a world of counterinsurgency and special operations,” he said in a stinging attack on Trump and hubris generated by the high-tech US style of war. “Some Americans think we can do a ground invasion,” he said. “Well, that would bring Korean War levels of combat.”

Trump’s threats to attack North Korea were the basis for new legislation introduced by Representative John Conyers Jr. and Senator Ed Markey. Written by Conyers, a Korean War veteran, the bill would require congressional approval for any military strike on North Korea by “restricting funds available to the Department of Defense” or any other agency from being used to launch a strike without prior approval of the House and Senate. It has over 60 co-signers, according to Conyers’s staff.

The pressing need for the bill was outlined last Friday in a press conference in front of the Capitol attended by about a dozen Democratic lawmakers.

“There is no military option; there is no nuclear option,” declared Senator Jeff Merkley. Representative Barbara Lee, the only member of the House to vote against the 2001 authorization for the Afghanistan war and the daughter of a Korean War veteran, said legislation was necessary because “President Trump’s war-mongering has been really disastrous. We will put some checks on the government not to do a first strike.”

Meanwhile, Seoul was holding its collective breath about Trump’s upcoming speech to the National Assembly, where the left (including the new Minjung Party) holds a substantial number of seats. “Depending on what Trump says during the address, his message to North Korea could send shockwaves across the Korean Peninsula, and the Korea-US Free Trade Agreement (KORUS FTA) could also come under attack,” the progressive Hankyoreh reported.

But so far Trump has held his tongue. Addressing US and Korean troops in his first hour in Seoul, he was sanguine, and his tone “almost blithe,” the Times reported. “Ultimately, it will all work out,” he declared, as Gen. Vincent Brooks, the US commander at Camp Humphreys, stood by his side. “It always works out. It has to work out.” Millions of Koreans hope so as well.