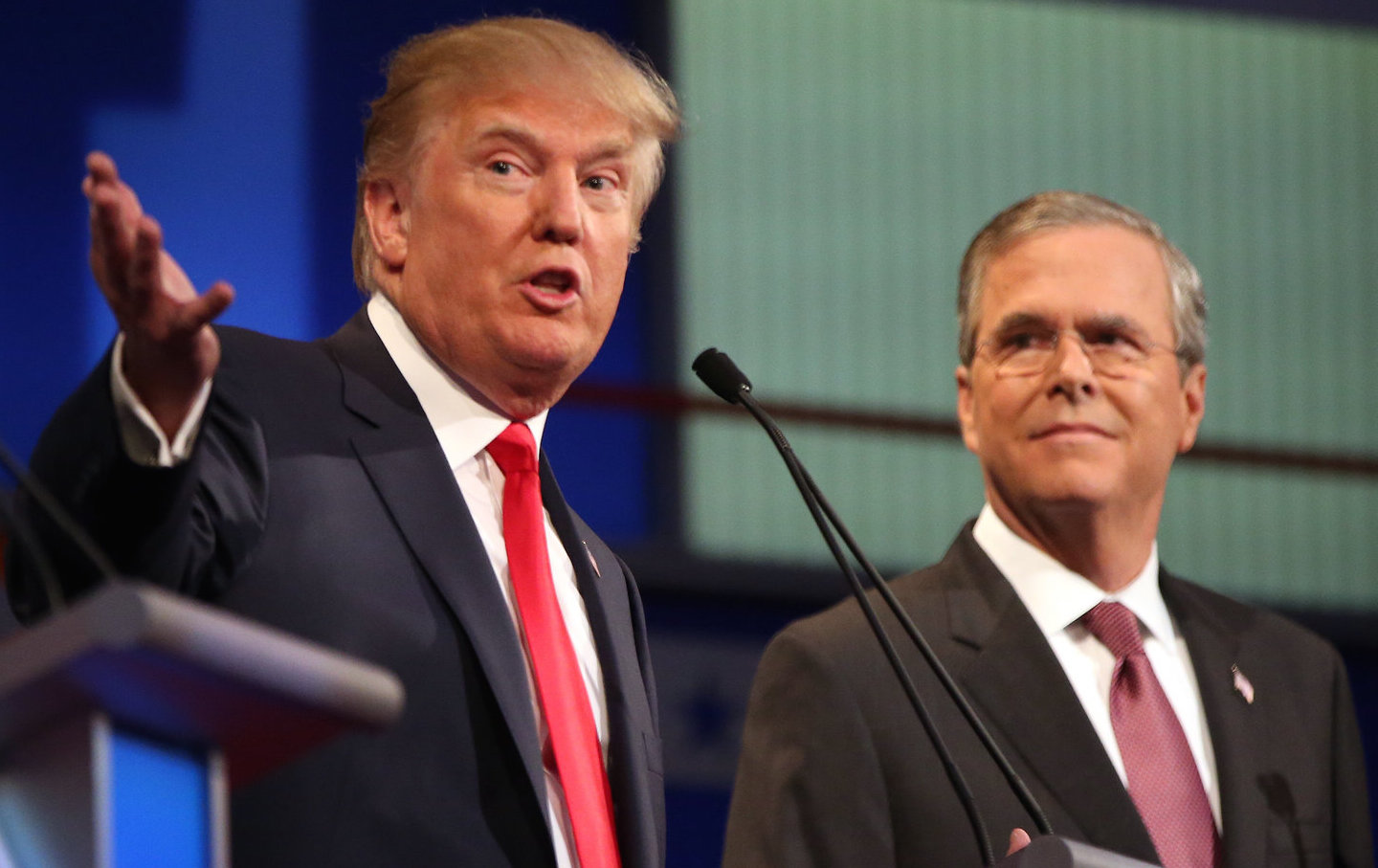 The first official Republican debate was, at least, good television, chock full of shouting matches, bald-faced lies, and ad hominem attacks. Spanning two hours, it addressed everything from national security to reproductive rights and economics (with a fifteen-second token question on race in America). Below, a roundup of the most outrageous, inaccurate, and simply hilarious statements from the ten candidates, by topic.

What Would the GOP Do Without Donald Trump?

The First GOP Debate: At the Kids’ Table

Ranging from Donald Trump’s pledge to “bomb the hell out” of Iraqi oil fields, to Scott Walker’s (more tempered) promise to fight ISIS like he fought 100,000 pro-worker activists, the flock of Republican presidential hopefuls have, over the months, discovered surprisingly inventive ways to direct their national security ideals. There was some hope that Rand Paul, who has occasionally expressed sensible views on civil liberties and national security, might challenge the GOP consensus, but as John Nichols points out, “when it counts,” Paul has proven to be far from the rogue libertarian people think he is.

Last night’s much anticipated Republican debate—which quickly devolved into excruciating levels of paranoia and xenophobia—did not lack the ferocity we’ve come to expect from the Grand Old Party. There were snide remarks from Donald Trump, petty insults between candidates, and (per usual) tacit calls for waterboarding, torture, and aggression. There was even an amusing mid-debate spat between Gov. Chris Christie and Sen. Rand Paul (“I think you fundamentally misunderstand the bill of rights”), Paul told Christie. More cringe-worthy moments below:

When Chris Christie shared a tad too much about his sex life earlier this week (he’s used birth control—“and not just the rhythm method, okay?”), he planted some false hope that in their first debate, the GOP candidates would dare to veer, even slightly, from their ever-more conservative party line on reproductive rights. Alas, the remarks from the ten wombless men were pretty much par for the course. It was as apparent as ever that the candidates are uniformly and staunchly anti-choice (Jeb Bush appears a relative moderate—for his belief that abortion should be legal only in cases of rape, incest, or the threat to a woman’s life).

This past month has been a feeding frenzy for anti-choice hysteria, following the release of several secretly recorded, deliberately edited, and ultimately unrevealing videos by the highly suspect “Center for Medical Progress” that claimed to expose Planned Parenthood for selling fetal body parts and advocated defunding the organization. Planned Parenthood was doing no such thing; furthermore, thanks to the decades-old Hyde Amendment, government funds can’t go toward abortion, so defunding Planned Parenthood would only serve to take away millions of women’s access to birth control, STI and cervical cancer screening, and health counseling. Yet the Republican Senate, led by many of the party’s presidential candidates, managed to set aside all logic and empathy in an attempt to pass a bill defunding Planned Parenthood. The bill failed on Monday, but that did not deter the candidates from sharing their spectacularly misguided opinions during Thursday’s debate. Below, their choicest remarks on women and reproductive rights:

At the adults’ table, economics barely made it onto the menu.

We knew a bit about where the candidates stood before this debate. Senator Marco Rubio had presented a tax reform plan that cuts, as The Nation noted, “almost every tax paid by the wealthy: on capital gains, on dividends, on carried interest and estate taxes.” Chris Christie has declared himself tired of hearing about raising the minimum wage, and Scott Walker agreed that wage hikes were lame. Jeb Bush’s policy positions—phasing out Medicare and repealing the Affordable Care Act—were criticized by Hillary Clinton at last week’s National Urban League conference. And businessman Donald Trump hadn’t offered any coherent policy plans beyond threats of new tariffs.

The Nation suggested some questions the candidates should field on poverty—a topic area that, from 2008 to 2012, went totally ignored through at least five consecutive presidential or vice presidential debates. But the massive inequality plaguing this country was basically a ghost during this debate, too.

Here are some of the highlights of the “economics” portion of the debate:

As predicted, Republican candidates obstinately avoided engaging race. In last night’s debate, moderators raised one question about police brutality, which Scott Walker barely answered before cutting straight to a commercial. Towards the end, Ben Carson was asked how he might begin to heal America’s racial divides and responded right along the same party line. Outside of these two questions, the closest Republicans got to talking about race was through the lens of immigration.

For the most part, we knew where the candidates stood on the topic of immigration before they stepped on stage. Last night, their responses fell right in line with our expectations: There was the usual false assertion that all immigrants are Mexican, calls for an impenetrable wall along the US-Mexico border and several references to Donald Trump’s racist characterization of immigrants. However, more than anything, the candidates relied heavily upon hyperbole to galvanize their increasingly paranoid and xenophobic base: