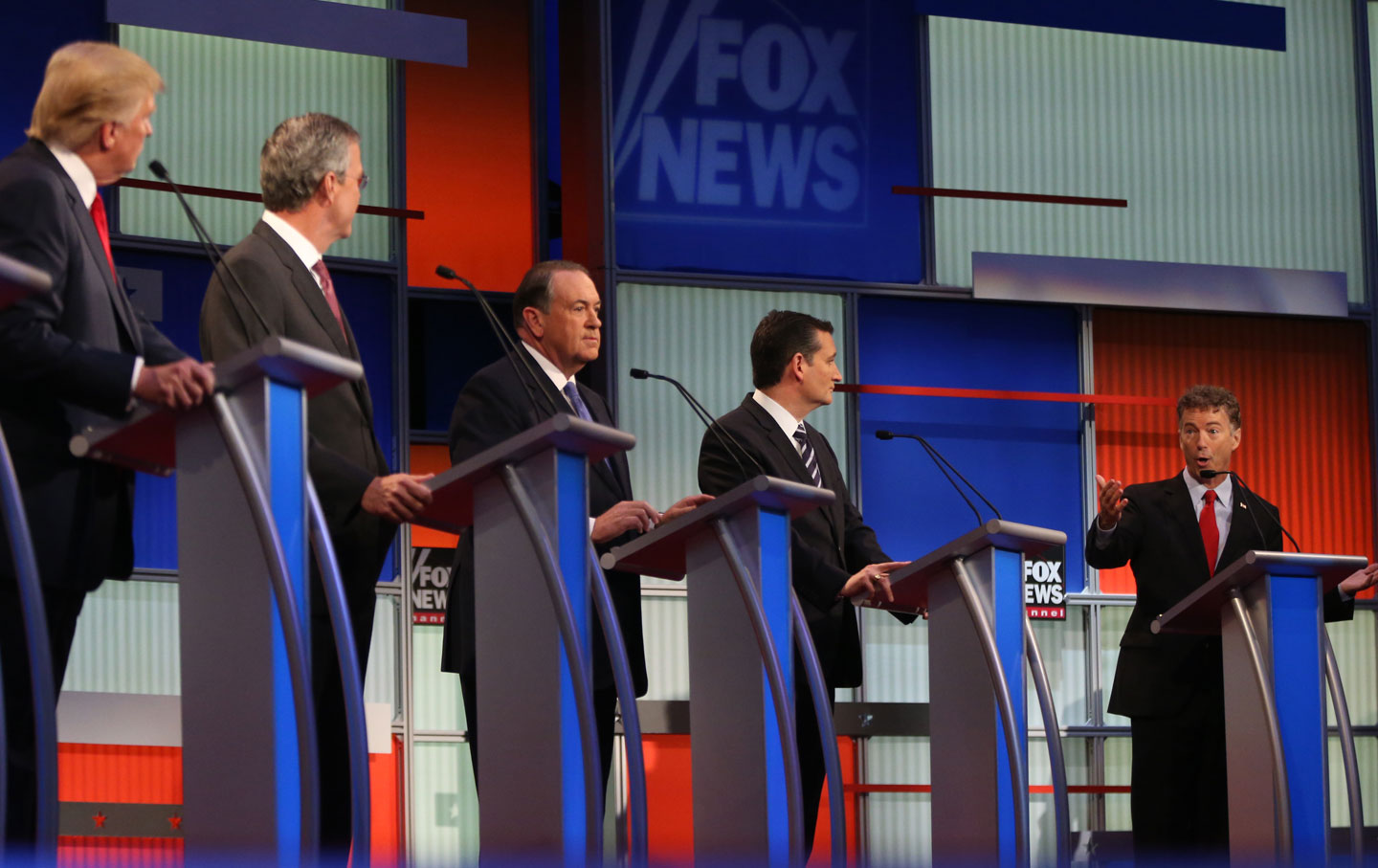 Cleveland—What would the Republican Party do without Donald Trump?  Although he sucks up all the air in the room, the angriest white man on the planet also turned what would otherwise have been the deadliest two hours on television into an electrifying illustration of the effect of celebrity in politics.  From the very first question, when moderator Brett Baier, in a butter-wouldn’t-melt tone, asked any candidate who refused to pledge to support the eventual Republican nominee to hold up his hand, and Trump, to resounding boos, raised his aloft, it was clear that Trump was off the leash and intended to remain that way.

A few minutes later, when Megyn Kelly challenged him “You call women you don’t like fat pigs, dogs, slobs and disgusting animals,” Trump’s retort—“Only Rosie O’Donnell”—seemed to get most of the audience on his side.  But his swipe at Kelly—“I’ve been very nice to you, even though I don’t have to be given the way you treat me, but I wouldn’t do that.”—again showed a thuggish side. It was only when, in response to Jeb Bush’s timid declaration that the GOP frontrunner’s language on immigration was “divisive,” Trump roared back, “If it weren’t for me, you wouldn’t even be talking about illegal immigration,” that the invited audience declared itself firmly behind the Manhattan mogul.

Meanwhile, the rest of the field struggled to make themselves heard—and mostly failed. John Kasich’s plausible imitation of a human being—not only would the Ohio governor not disown his 15 year-old twin daughters if either of them came out as gay, he recently attended a friend’s same-sex wedding—led some commentators to name him the night’s big winner.  Really, though, it merely revealed the shame and cowardice of the other men on the platform.

These were men who vied to outdo one another in their denunciations of Planned Parenthood—hardly surprising from men united in their belief (or in Trump’s case, lip service to the belief) that eggs become fully human the moment they are fertilized—and in their readiness to abandon diplomacy with Iran.  Men who, with the sole exception of Kasich, would happily deprive the poor of healthcare on their first day in office. And who, without exception, viewed a vicious nativism as the path to power.

For anyone outside the Beltway bubble, the proceedings were profoundly depressing.

There were a few welcome distractions: the fireworks between Chris Christie and Rand Paul over the Kentucky senator’s opposition to warrantless wiretapping, Mike Huckabee’s declaration that “most of the income in this country is made by people at the top, who get income and capital gains” (has he been taking advantage of media indifference by slipping into Bernie Sanders rallies on the sly?), Marco Rubio’s admission that “If this election is going to be a resume competition, then Hillary Clinton will be the next president.”

But for anyone outside the Beltway bubble the proceedings were profoundly depressing.  One of the reasons elections matter is because they hold up a mirror to the kind of country we are—and the kind of country we want to be. On tonight’s evidence America (or at least that portion of America represented by the Ohio GOP’s invited audience) is a country that applauds a bully, fears all foreigners, knows that the system is rigged to favor the rich—and will fight to the death to keep it that way. In a sane world Donald Trump would have a bell hung around his neck and be greeted by cries of “Unclean! Unclean!” Instead, and unless Trump self-destructs, the rich seam of anger opened by his campaign might well bring him back here next year as the GOP nominee.  Because on the basis of their performance tonight no one on that stage is capable of stopping him.