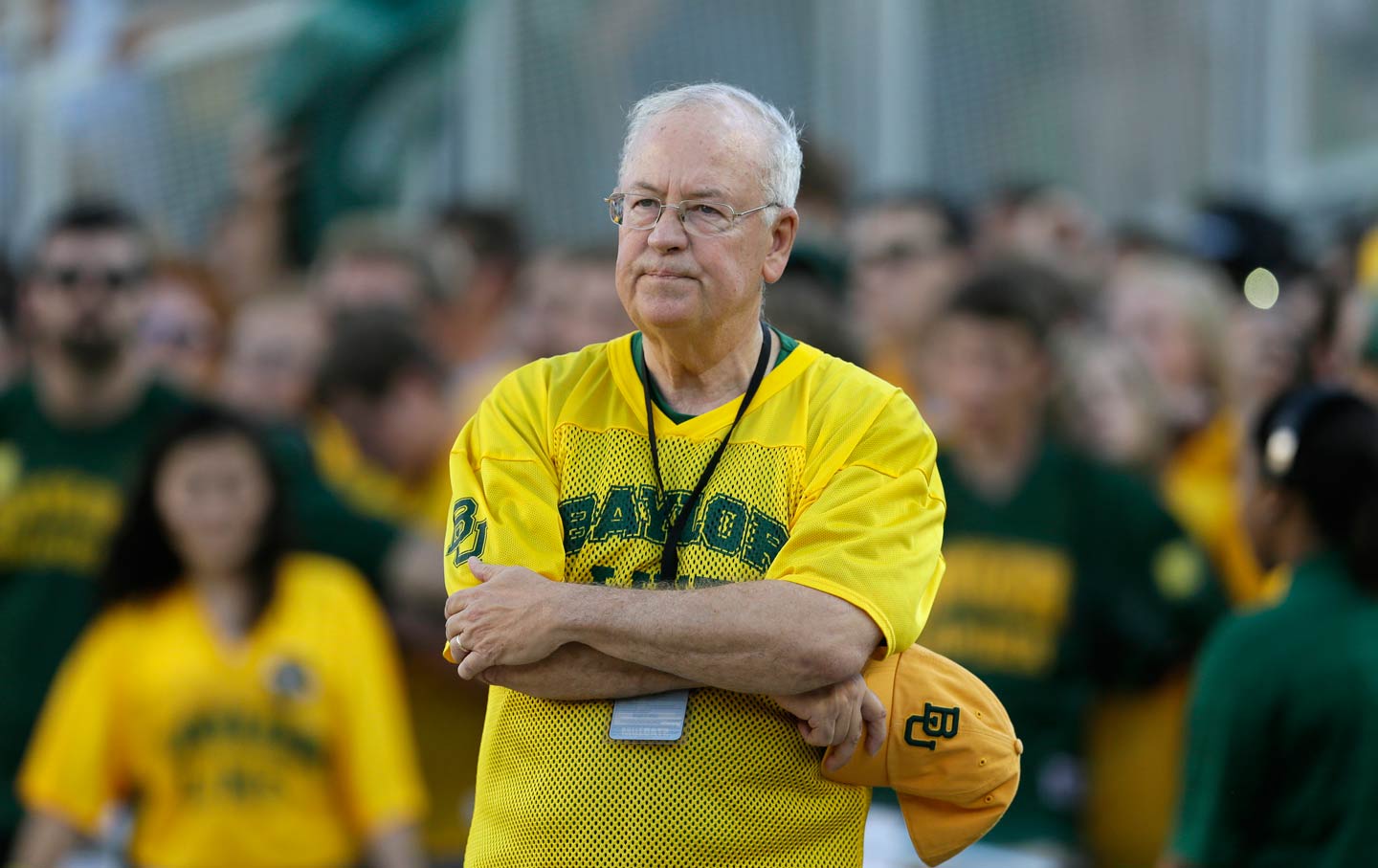 Ken Starr waits on the sidelines before a Baylor football game on September 12, 2015, in Waco, Texas. (AP Photo / LM Otero)

UPDATE, 6/1: Ken Starr has resigned from his position of Chancellor at He still maintains that he “didn’t know what was happening” regarding accusations that rape allegations against the football team were mishandled, but he says “The captain goes down with the ship,” he said. He will still teach at the law school.

Ken Starr hates women. Too harsh? It at least seems appropriate to write that Ken Starr, without shame, holds the lives of women in contempt and that this emotional tic has served him quite well. It is also, finally, catching up to him. In the 1990s, Starr rose to lurid national prominence as the right-wing grand inquisitor of Bill Clinton’s sex life. Today, he is the deposed president of Baylor, someone who, it seems, callously disregarded multiple allegations of sexual assault because the rapists were on the football team (although the acceptance of rape at Baylor seems to extend well beyond the football field). Yet Starr’s 1990s puritan zealotry and his blithe inactions today are two sides of the same gold coin.

Those of us over a certain age will always remember Ken Starr as the smooth-faced, cherubic independent prosecutor with the rimless glasses, peering into every last scandal of Bill Clinton’s presidency with unprecedented latitude. It would have been remarkable—as historian Howard Zinn said at the time—if an independent prosecutor was examining the influence of Wall Street on Clinton’s neoliberal agenda, or the influence of the private prison industry. But Starr’s interest always strayed below the belt.

His mandate somehow turned into “The Starr Report,” his bluntly written, cringe-inducing, widely disseminated account of Clinton’s affair with White House intern Monica Lewinsky, which attempted to uncover the critical constitutional question about whether blowjobs should be classified as “sex.” It was a transparent effort to shame Clinton out of office, with an absence of concern of what such an effort would do to Lewinsky. The report and attendant shaming sent her out of the country and into a state where she contemplated suicide. While she suffered, Ken Starr became a hero in conservative circles for his stoning of Lewinsky in the public square.

At the time, there were no shortage of voices asking Starr why his report had to be so brutal toward Lewinsky. He smiled and shrugged, a version of Game of Thrones’s High Sparrow in a $5,000 suit. If there had been an understanding of Ken Starr as a trailblazer of this kind of misogynistic thuggery, perhaps he would not have ascended the ranks of conservative academia to his perch at the Baptist Baylor University, and perhaps a great deal of pain could have been avoided in Waco.

Starr is no longer president of Baylor, after the university’s board of regents received a shocking independent report from a law firm investigating the school’s response to numerous allegations of rape against members of the football team and beyond. The report—which should be titled “The Starr Report 2.0”—contends that Starr and numerous university officials ignored rape as long as star football coach Art Briles won conference titles and the school, as ABC News put it, “reaped significant financial rewards.” It also states that there was “no culture for accountability” for the numerous players alleged to have committed sexual assault, or any kind of an appropriate response by the school after two members of the team were convicted and sentenced to years behind bars for their crimes. The report also speaks of “retaliation for people who came forward,” although the details of that frightening statement are still unknown.

Why did Ken Starr possess such a moral blindness? Does he really see Bill Clinton’s adultery as a greater sin than rape? The truth is probably far less interesting. It’s a familiar story common to college football powers across the country, whether the school is public or private. The fact is that Baylor was flourishing under his tenure, with the football team central to its branding. As Jessica Luther and Dan Solomon wrote, they “scaled up its focus on research, big-name faculty, and sports. It tripled its tuition between 2002 and 2016. It took on unprecedented debt—building a $266 million football stadium, a $103 million sciences building—in pursuit of its ambition to enter that top tier of schools, to become the Baptist Notre Dame.”

It wasn’t just the school living high on the hog off of big-time football. Briles, whose team won two Big 12 titles in his eight years as head coach, had an annual salary of $4.2 million. As for Starr, his base salary was $789,000, but more importantly he was able to use football to leverage fundraising and turn Baylor into a Southern Baptist powerhouse.

For now, Starr will still be the chancellor, which would mean he would have “no operating responsibilities inside the university.” As ESPN columnist Mark Schlabach reported, his focus “will be external fundraising and religious liberty.” It is difficult to see how seeing “Ken Starr: Director of Religious Liberty” on a brochure, will help Baylor going forward. It is also difficult to see Ken Starr not being eventually replaced.

Richard Willis, chairman of the Baylor Board of Regents, said in a statement:

We were horrified by the extent of these acts of sexual violence on our campus. This investigation revealed the University’s mishandling of reports in what should have been a supportive, responsive and caring environment for students. The depth to which these acts occurred shocked and outraged us. Our students and their families deserve more, and we have committed our full attention to improving our processes, establishing accountability and ensuring appropriate actions are taken to support former, current and future students.

After stepping “down” to become chancellor, Starr said, “Despite these dark days, I remain resolved to join hands with the Baylor family to continue to build the University as we carry out its distinct mission in Christian higher education. May God grant us grace, mercy, and peace.” Enough of this fraudulent man’s pious bromides. Baylor should be applauded for dumping Briles. It certainly is out of step with how college football powerhouses have handled rape accusations for the last century. But to truly be serious means removing the powerful Ken Starr from his perch. It’s about sending a message that women must no longer be collateral damage for a big-time college-football team, or for one man’s thirsty quest for power and prestige.