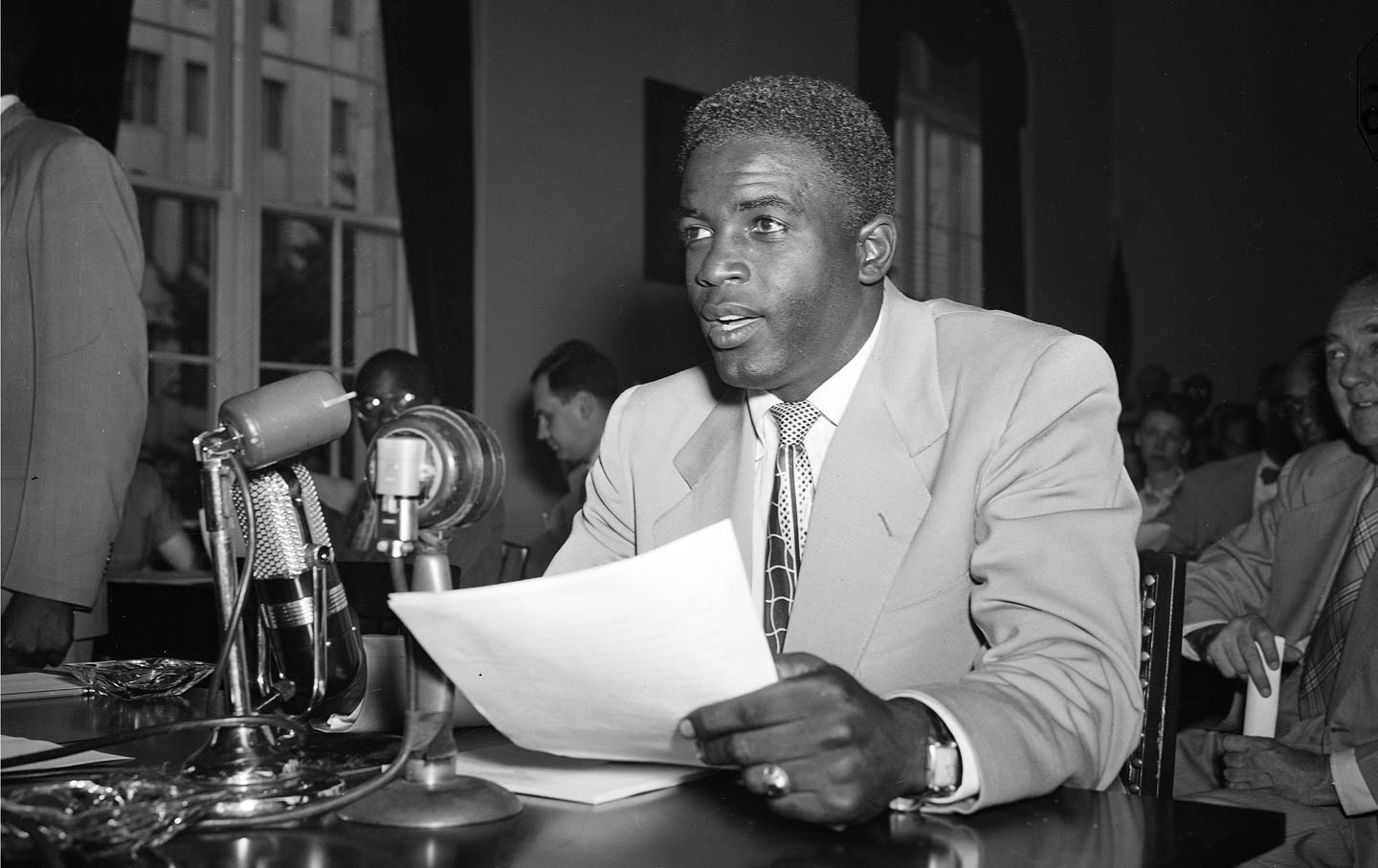 Listen to the Edge of Sports interview with Ken Burns here.

Ken Burns believes that Jackie Robinson’s mid-century life is a deeply under-appreciated lens for understanding our roiling political present. I interviewed Ken Burns about his triumphant two-part PBS documentary—co-created with Sarah Burns and David McMahon—about the player who smashed baseball’s color line but also confronted so much more. “Think about what [Robinson] was dealing with,” Burns said to me, “the Confederate flag, driving while black, stop and frisk, #BlackLivesMatter, burning black churches…. Jackie is not only inspirational but an agent for how we try to digest the current situation about race.”

With four hours of running time, Burns is able to create a three-dimensional portrait of Robinson, beyond caricature or hagiography. He is also, in the second part, which airs Tuesday night, able to use Robinson as a lens to understand why the Republicans and Democratic parties are so sclerotic on issues of race. As Burns said, “Robinson was there in 1960 and 1964 when the two parties switched sides on the Southern white vote, and that’s a huge moment in American history. He witnessed it firsthand.”

Robinson, sure enough, was present at the 1960 Democratic Convention as well as 1964 Republican Convention, and what he saw left him distraught. Jackie was a lifelong Republican because the Democratic Party’s Dixiecrat wing ran his family out of Georgia. In 1960, angered that Richard Nixon ignored his requests to help a jailed Martin Luther King, he considered endorsing John Kennedy and attended the Democratic National Convention. He also had friends telling him that this senator from Massachusetts was serious about civil rights. Yet Kennedy was still trying to hold that Dixiecrat coalition together and sat segregationist Governor of Arkansas Orval Faubus on stage. Robinson walked out in disgust.

In 1964, Robinson endorsed New York Governor Nelson Rockefeller and attended the Republican National Convention as a “Rockefeller Republican” delegate, only to witness the ascension of Barry Goldwater as his party made its play for Southern whites enraged at Lyndon Johnson’s support for the Civil Rights Act. He saw, in Burns’s words to me, the moment when “the Republican Party made a pact with the devil for which they are still paying, from Ronald Reagan beginning his campaign in Philadelphia, Mississippi, saying ‘I’m for states’ rights,’ through Willie Horton, through, now, Donald Trump taking a couple days to—wink, wink—disavow David Duke and white supremacy in the Ku Klux Klan.”

Burns described the scene that Robinson witnessed firsthand at the 1964 RNC: a place where, “out of thirteen hundred delegates, 15 were black, and of those 15, one had his credentials revoked and another had cigarettes put out on him by Goldwater supporters. There was an angry Alabama delegate who wanted to get into a fight with Jackie, and Jackie was ready to do it. Unfortunately, the delegate’s wife held him back and it didn’t happen.” It was after this scene that Robinson later said he now had “a better understanding of how it must have felt to be a Jew in Hitler’s Germany.”

While Jackie Robinson was trying to find a political home, a new generation of black activists were not waiting for the two-party system to catch up with their demands. Many of these movement leaders classified Jackie as an “Uncle Tom,” and Ken Burns explores this painful part of the story as well: the debates with Malcolm X and the Panthers and Jackie’s own despair at the state of the nation.

Burns believes passionately—you can hear it in his voice—that this story speaks to the current moment and “sets us up to talk about our best selves” in a way that’s open and honest, because “history is a table in which we can still have a civil discourse.”

And we need this discussion now more than ever. As Burns said, “A leading candidate for president of the United States takes two days to disavow David Duke and the KKK, and that goes right back to the Goldwater calculus of ‘let’s go hunt where the ducks are.’ And Republicans who are surprised are crying wolf. You cannot be surprised if you are in Dr. Frankenstein’s lab that suddenly you created a monster.”

I would add to that, the spectacle, three days after my interview with Burns, of Bill Clinton trying to sell the welfare reform and mass incarceration of the 1990s and dismissing Black Lives Matter protesters as part of some “pivot to the general” is part of this tradition as well. After watching Jackie Robinson, it is not difficult to divine what number 42 would have said about the 42nd president. After watching Burns’s documentary, I could hear Jackie Robinson in the words of New Jim Crow author Michelle Alexander, who wrote of Bill Clinton’s performance, “[In the 1990s] it was Bill Clinton’s deliberate political strategy—one he championed along with the ‘New Democrats’—to appeal to white swing voters by being tougher on struggling black communities than the Republicans had been, ramping up the drug war and gutting welfare.”

This searing documentary about Jack Roosevelt Robinson is the best antidote to the Donald, the Bill, and all practitioners of the politics of racial division. As Ken Burns said to me, “Jackie Robinson is the apostle of our better selves and is the apostle of the better angels of our nation.” And he becomes this apostle by being presented as three-dimensional, anguished, and all too human.