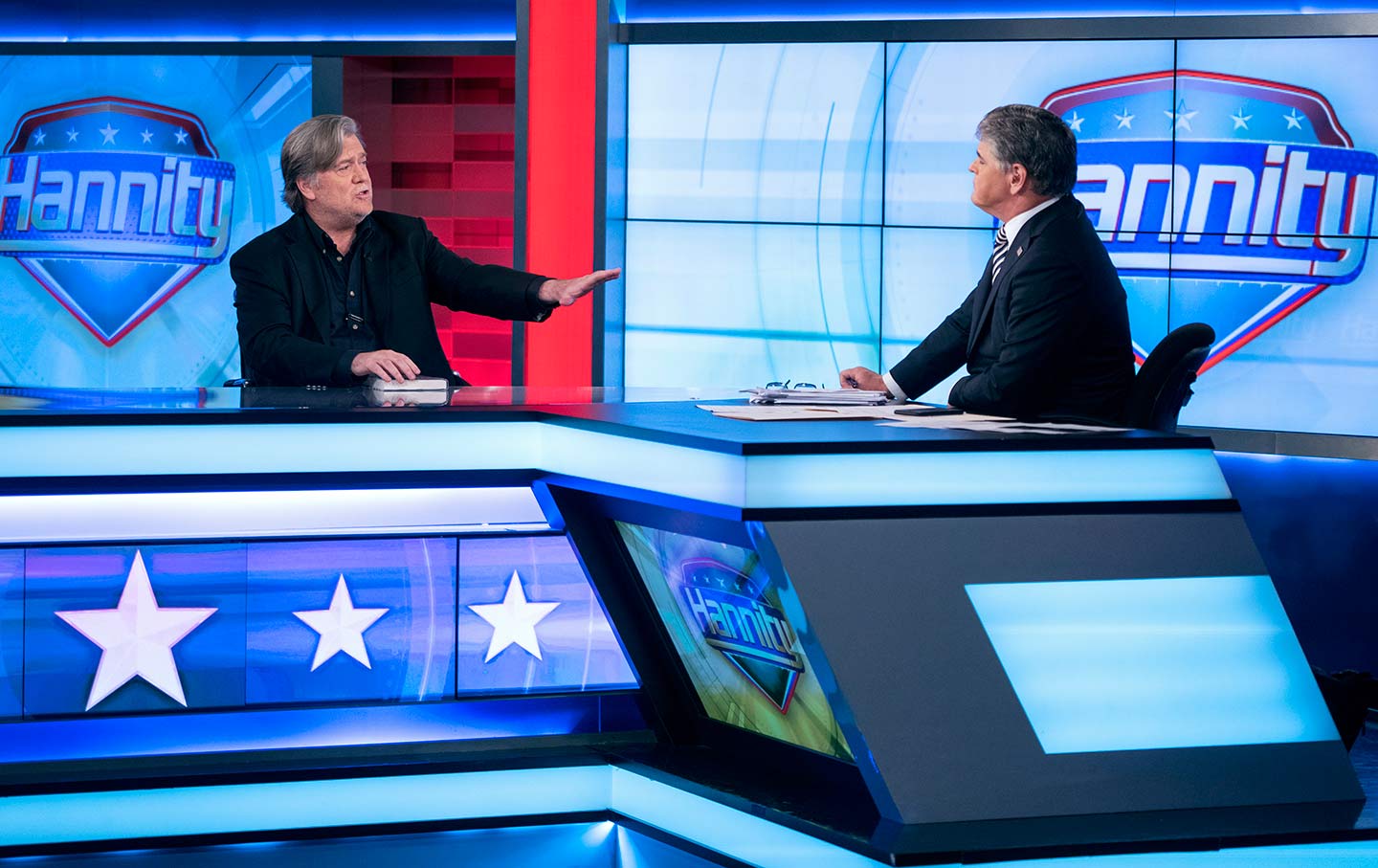 Our political media today is a one-sided battle. In one corner, we have the old-fashioned gatekeepers doing business as they always have: fearful of offending the powerful, and constantly attempting to strike a balance between profit and what they deem the “public interest.” In the other is an amalgam of right-wing institutions that found a path to riches by combining lies, prejudice, and conspiracy theories—with precious little actual journalism. Donald Trump’s presidency has boosted the latter’s influence, helping to metastasize its cancerous mendacity throughout the body politic. But the phenomenon precedes Trump—indeed, without it he would still be a C-list celebrity grifter.

In their in-depth 2011 study of the Tea Party, political scientists Theda Skocpol and Vanessa Williamson observed that “what America has right now is a thousand-pound gorilla media juggernaut on the right, operating nineteenth-century style, coexisting with other news outlets trying to keep up while making fitful efforts, twentieth-century style, to check facts and cover ‘both sides of the story.’” Back then, the juggernaut was mostly Fox News and Rush Limbaugh–style talk radio. But today, there’s been a proliferation of outlets that exploit their audience’s gullibility and the unwillingness of Facebook, Twitter, and YouTube to take responsibility for the lies and hatred they so profitably distribute.

Three scholars associated with the Berkman Klein Center for Internet and Society at Harvard University—Yochai Benkler, Robert Faris, and Hal Roberts—have published a study that does the best job I’ve seen of contextualizing the current information ecosphere. Their book, Network Propaganda: Manipulation, Disinformation, and Radicalization in American Politics, builds on the Skocpol-Williamson thesis with an ocean of alarming data.

Contrary to popular opinion, the authors find “no left-right division, but rather a division between the right and the rest of the media ecosystem. The right wing of the media ecosystem behaves precisely as the echo chamber models predict—exhibiting high insularity, susceptibility to information cascades, rumor and conspiracy theory, and drift toward more extreme versions of itself.”

In an interview with Boston Review, Benkler notes that this arose with “the emergence of a business model that stokes anger and outrage and reinforces identity-based politics just when the Republican coalition began to lean heavily on two deeply identity-based communities, namely, angry whites in the wake of the civil rights movement and the religious right pushing back against the women’s movement.”

Today, right-wing sites account for an increasingly large portion of political-news sources, and they abide by no known rules of journalism. “[E]ven core right-wing sites that do claim to follow journalistic norms, Fox News and the Daily Caller, do not in fact do so,” the authors of Network Propaganda correctly observe. This stands in direct contrast to left-wing sites, which, according to Benkler, “share the reporting and journalistic traditions of mainstream media.” (I’d say we do far better.) But the influence of the left pales compared with that of the right. We should all know this by now, but the data amassed in this study remains shocking. During the 2016 election, for instance, the racist, inflammatory Breitbart was the third most frequently shared news source on Facebook, right behind The New York Times and CNN. (Fox News finished 14th; it’s no coincidence that Roger Ailes and Rupert Murdoch gave up their resistance to the Trump tsunami.) Together, Fox, Limbaugh, Breitbart, and all the smaller but surprisingly well-read conservative sites constitute a “propaganda Feedback Loop” that progressively lowers the costs of lying and “increases the costs of resisting that shared narrative in the name of truth,” according to the Berkman Klein Center team.

This “feedback loop” has been identified by other scholars as well. The libertarian Julian Sanchez uses the term “epistemic closure” to argue that whatever contradicts the reality presented by right-wing news “can be dismissed out of hand because it comes from the liberal media and is therefore ipso facto not to be trusted.” This was borne out by the research of scholars Matt Grossmann and David Hopkins. In their 2016 book Asymmetric Politics, they write that the “conservative movement simultaneously undermined popular faith in both mainstream academe and journalism among its supporters, [while] building and reinforcing Republican reliance on alternative ideological information sources.” Its members “view themselves as engaged in an ideological battle with a hostile liberal ‘establishment’”—“turn[ing] even their choice of news or research source into a conscious act of conservative self-assertion.” This explains why a YouGov poll in December 2016 found that nearly half of Trump voters believed that Hillary Clinton was running a pedophilia ring from the basement of a pizza joint named Comet Ping Pong.

Benkler says that Network Propaganda’s “most important audience…is the professional newsroom,” because the mainstream media have made themselves complicit in this system. He explains that “when one side systematically produces propaganda and has no internal checks,” the insistence on maintaining neutrality creates a fiction that “there are two legitimate sides to the story.” In fact, “To say this side says ‘x’ and this side says ‘not x’ systematically reinforces and amplifies the lies.” That mainstream news outlets spent more time on stories about the “migrant caravan” and “voter fraud” than health care is a perfect illustration of the problem.

Journalists, these researchers warn, are under an asymmetrical attack. But as Benkler astutely declares: “The commitment to professional journalism at its highest level is going to be the single most important thing that we can do to deal with this moment of epistemic crisis.” The early returns, alas, are not encouraging.