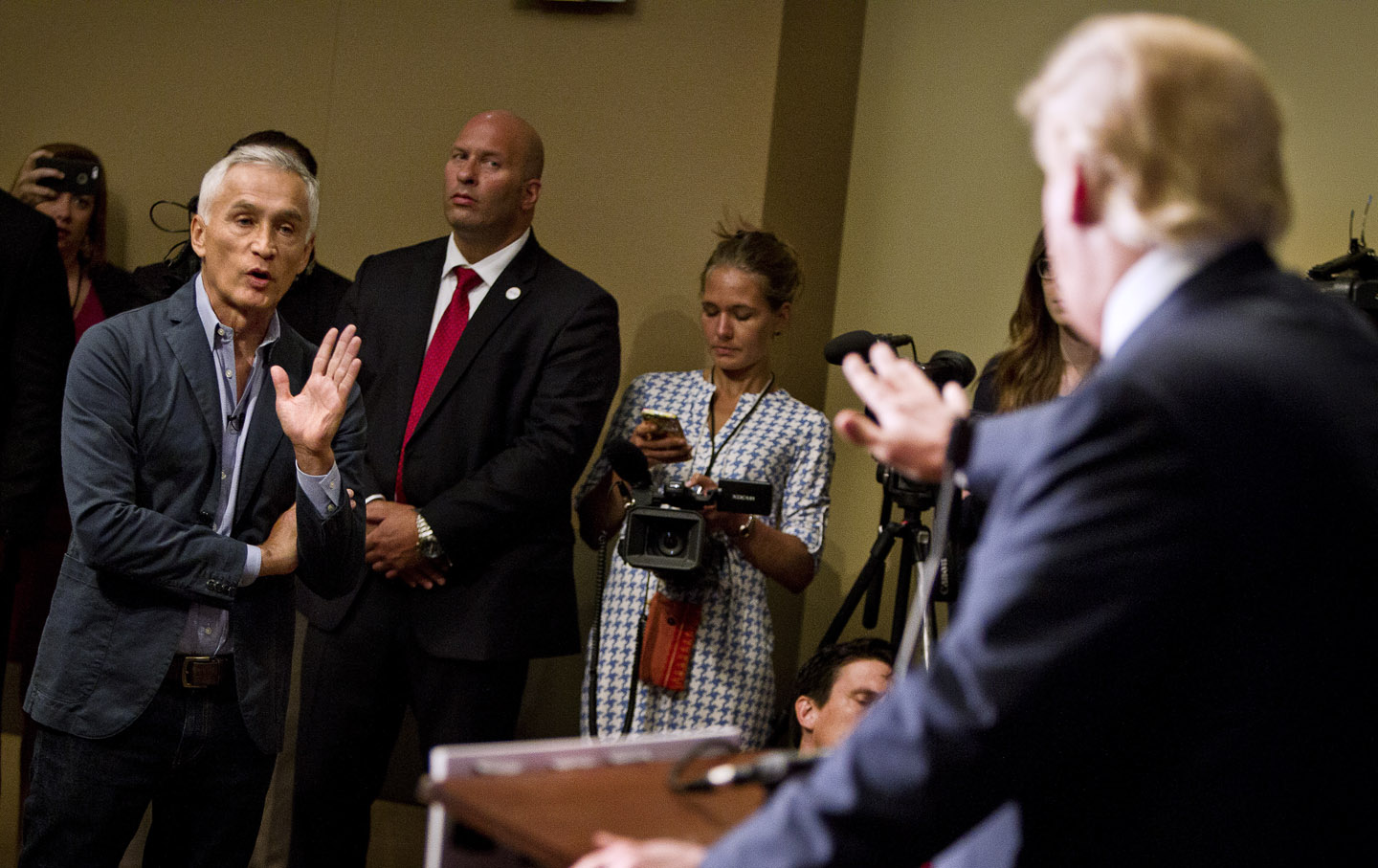 When Univision anchor Jorge Ramos kept asking Donald Trump tough questions about immigration policy—until Trump’s security forces physically removed one of the nation’s most prominent journalists from what was supposedly a press conference—he was not just challenging a billionaire blowhard. He was challenging a political process that has veered toward absurdity.

Some critics claim that Ramos, who is often described as “the nation’s top Latino newsman,” offended journalistic and political propriety when he rose at a reasonable point during a Tuesday press conference in the first caucus state of Iowa to question a candidate for president.

But it was Trump, who has avoided interview requests from Ramos and Univision while racing to make himself available to more amenable media, who had called the press conference and invited questions. And it was Trump whose initial response to Ramos was to interrupt a legitimate line of questioning with repeated demands that the veteran journalist “sit down.”

“You weren’t called,” declared Trump. “Sit down. Sit down.”

When Ramos persisted in asking questions about the immigration issues that Trump claims to have moved to the forefront of the national agenda—“I’m a reporter, an immigrant, and a citizen. I have the right to ask a question…”—the leading contender for the Republican presidential nomination became even more agitated.

“I’m a reporter, an immigrant, and a citizen. I have the right to ask a question.” — Jorge Ramos

“You haven’t been called, go back to Univision,” raged Trump.

It was at that point when Ramos was grabbed and escorted from the room. Eventually, Ramos was allowed to return and, when Trump cooled down, to raise some questions. But the image of a journalist being physically ejected from a presidential candidate’s press conference because he was raising reasonable—and necessary—questions has created the latest media mayhem for a Trump campaign that is already in the midst of running conflicts with Fox News and The Des Moines Register and various and sundry other news outlets.

As National Association of Hispanic Journalists president Mekahlo Medina noted, “Mr. Ramos was doing what journalists have done for decades—asking questions! Ramos was simply trying to hold a candidate for president accountable for statements he made about a very important topic to the American people. Mr. Trump has avoided Mr. Ramos’ attempts for an interview to reasonably discuss Mr. Trump’s opinions and ideas about immigration and American children born to undocumented immigrants.”

The NAHJ statement did not just focus on this one incident, or on Ramos and Trump. It highlighted the importance of standing “with journalists everywhere who are simply working to pursue the truth and hold people in power accountable for their statements and their actions.”

That broader perspective is essential.

This is not about a particular journalist or candidate. This is about a political process that requires challenges from journalists and citizens.

In this digital age there are those who may imagine that the term “press” is outdated. After all, most of us get our information from media that does not pass through a printing press.

But “press” is still the operative term.

A “press,” the dictionaries tell us, is “a device for applying pressure.” To “press” is to engage in “an action of pressing or pushing.” The point is to create a tension that advances a process.

News media should apply pressure—sometimes to politicians and parties but always, and most importantly, to the political process. A stenographic media, which simply records announcements from the status quo, does not create the necessary tension. Without it, progress becomes unlikely, perhaps even impossible. At best, a stenographic media assists the existing order in maintaining its position. At worst, it encourages a degeneration of the process that realizes the warning of songwriter Bruce Cockburn that “the trouble with normal is it always gets worse.”

This is a key distinction. Journalists have every right to ask tough, even snarky, questions of candidates, just as they have every right to highlight the potential of candidacies and movements that challenge the status quo. But the point of a free press extends far beyond the interactions between individual reporters and candidates. The Bill of Rights does not include a freedom-of-the-press protection simply to make things hard for Hillary Clinton or easy for Carly Fiorina. The point of the First Amendment is to encourage debate and discourse and a steady prodding—from the press, from individual citizens, from movements—for improvement of an American experiment that the founders worried would decay if those with power were able to shape the political discourse, and by extension the political process, without challenge.

Despite his faux populist trappings, Donald Trump has power: wealth, position, prominence, and bully pulpits aplenty. And he is, to a greater extent even than some of his harshest critics imagine, shaping the 2016 process.

Jorge Ramos has been challenging Donald Trump and the process in recent weeks by raising pointed questions about not just Trump’s disjointed immigration policies but a degenerating discourse in which absurd proposals and claims are treated seriously.

Ramos is right to question Trump’s “plans” to build walls, to upend constitutional protections and to force 11 million immigrants out of the United States. Ramos is right to raise practical and human concerns. “How is he going to deport 11 million people?” asks the newsman. “By bus? By plane? Is he going to bring the army to do that? Can you imagine the human-rights violations that would create?”

Ramos is also right when he suggests that Trump is “the loudest voice of intolerance, division, and hatred right now in America.”

But the key word there is “loudest.” Ramos certainly did not, and presumably would not, say “only.”

Republican presidential contenders are stumbling over one another in a rush to rant and rave about “birthright citizenship” and “anchor babies” and “illegals.”

The process has degenerated to a point where families that are seeking refuge are dismissed as criminals and rapists, and children born in the United States are imagined to be illegal. The point Ramos has been making—that the debate as it now stands is not just crude but exceptionally unrealistic—represents a challenge to Trump and the other Republicans who are seeking the party’s nomination. But it is also a challenge to a discourse that is straying toward absurdity.

Candidates and citizens can and will disagree about immigration policy and a wide range of issues. Those disagreements can and will be extreme. No one should want, nor expect, to narrow the range of debate. But there will be no resolution, no progress, if there is no pressure on the side of realism—and at least some reference to the immigrants, the poor, the dispossessed who are so often and so crudely dismissed by politicians and partisans, as human beings. Jorge Ramos sought to apply necessary pressure with his questioning of Donald Trump. Trump did not approve. But the rest of us should.