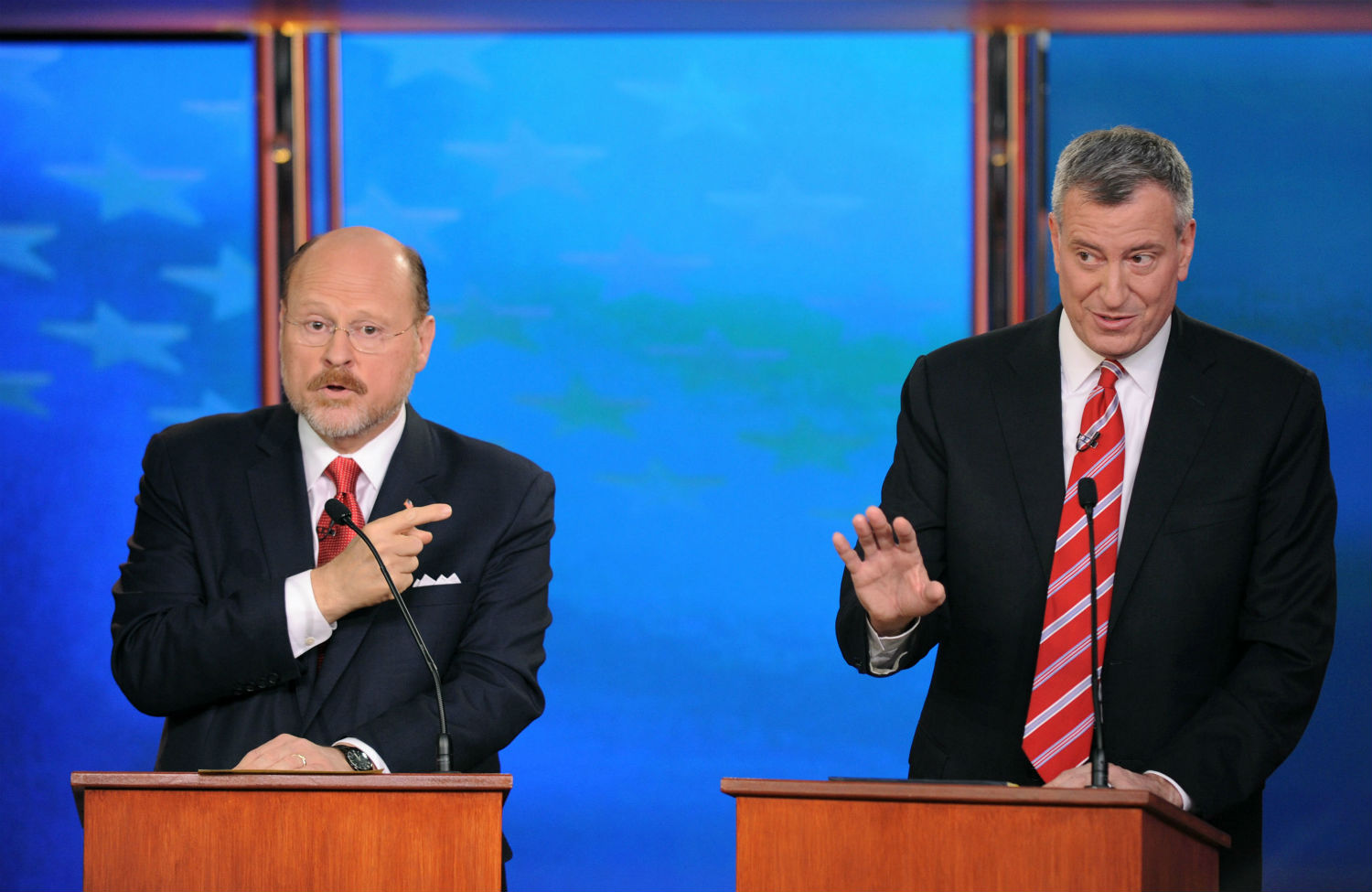 The morning after Bill de Blasio and Joe Lhota’s third and final debate in the NYC mayoral race, Lhota went on Fox 5 TV and talked about his latest ad. He said he hoped the TV spot, the first in which he actually speaks, would “send a message out directly from me to the people…about my sincerity and what I can do as their next mayor.”

The ad fails to convey sincerity (in it he repeats his not-credible line that “we are one bad mayor away from unsafe streets, failing schools and fiscal chaos”)—but in the debate last night, he was sincerity central. In fact, despite some of Lhota’s short-sighted policies and an apparent blindness to the folly of, say, trickle-down economics, I found myself liking the guy.

I’m a chump for underdogs, especially when they’re halfway out the door, but last night Lhota showed heart and concern—on racial profiling (“There’s no room for racial profiling in New York,” Lhota said emphatically. “If a store [like Barneys] racially profiles, that store should be punished”), for the homeless (treat them like “humans,” he said, but only shelter the New Yorkers among them), and for the unrelentingly hard work of “union members” during Hurricane Sandy.

Lhota evinces empathy, at least as much as progressive de Blasio, but not quite enough to follow through with helpful or even logical policies (how, for instance, do you ascertain the residency of homeless people?), and not enough to overcome an inability to see the problems obvious to most everyone else.

Was Rudy Giuliani, the mayor for whom Lhota served as a capable deputy, “divisive,” as de Blasio charged, and as most New Yorkers saw firsthand? Not to Lhota. “The divisiveness,” he said, “was minute compared to” all the good things he did.

Lhota couldn’t even see how his boss was divisive in the Patrick Dorismond case. After Dorismond was killed in a police shooting, Giuliani released his sealed juvenile records in order to prove he was “no altar boy.” “I don’t think that was divisive,” Lhota said last night.

“The fact that Mr. Lhotoa doesn’t even see that is divisive” is the problem in a nutshell, de Blasio replied.

Likewise, on tax issues: When de Blasio asked Lhota why he believes trickle-down economics would work in New York, Lhota simply insisted that his proposal to cut taxes for corporations and the wealthy in order to create more jobs down the line is “not trickle-down.” It is, of course, the definition of trickle-down and, as de Blasio said, “the same policy that failed nationally.”

That’s the problem with a lot of moderate Republicans, like Representative Tom Cole of Oklahoma or former Senator John Danforth of Missouri: their hearts often are in the right place, but they refuse to connect that to policy.

But I got to say, another reason Lhota began to grow on me during this race is that he isn’t slick, and in fact is less so than de Blasio.

Lhota is an experienced manager, and maybe he’d be good at running the city’s bureaucracy of 300,000 workers, as the New York Times portrays him today. But Lhota, who hadn’t run for public office before this race, is a lousy politician. He doesn’t sell himself—on the one-year anniversary of Hurricane Sandy, he didn’t mention that as MTA chief, he restored subway service when so many other services faltered (“I’m not going to use this as a day to politic,” he said), and he barely mentioned the MTA in the debate the next day.

And he often speaks in unnuanced, un-thought-out clunkers: like saying on radio this morning, “Bill de Blasio is absolutely no different than David Dinkins, [he] wants to divide us between black and white, rich and poor.”

Being mayor is as much as a politician’s job as is getting the trains to run on time, and time after time, de Blasio’s showed he’s an experienced politician.

In fact, in two profiles of de Blasio, he’s coming across as a minor master of long-game, three-dimensional chess.

The Times writes today that on when he served on the city council, de Blasio “Blended Idealism With Push for Power,” and that he “showed a zest for taking care of, and taking up the causes of, those important to him,” including his mother and his dentist as well as constituents and the larger progressive community.

Not that being more prag than prog is necessarily a bad thing. As Bob Master of the Working Families Party also told NY mag, “But look, do I think this is a guy who will never compromise? No. And we don’t want somebody like that. We want somebody who understands how to push things as far as you can go and make the best possible deal when it’s available.”