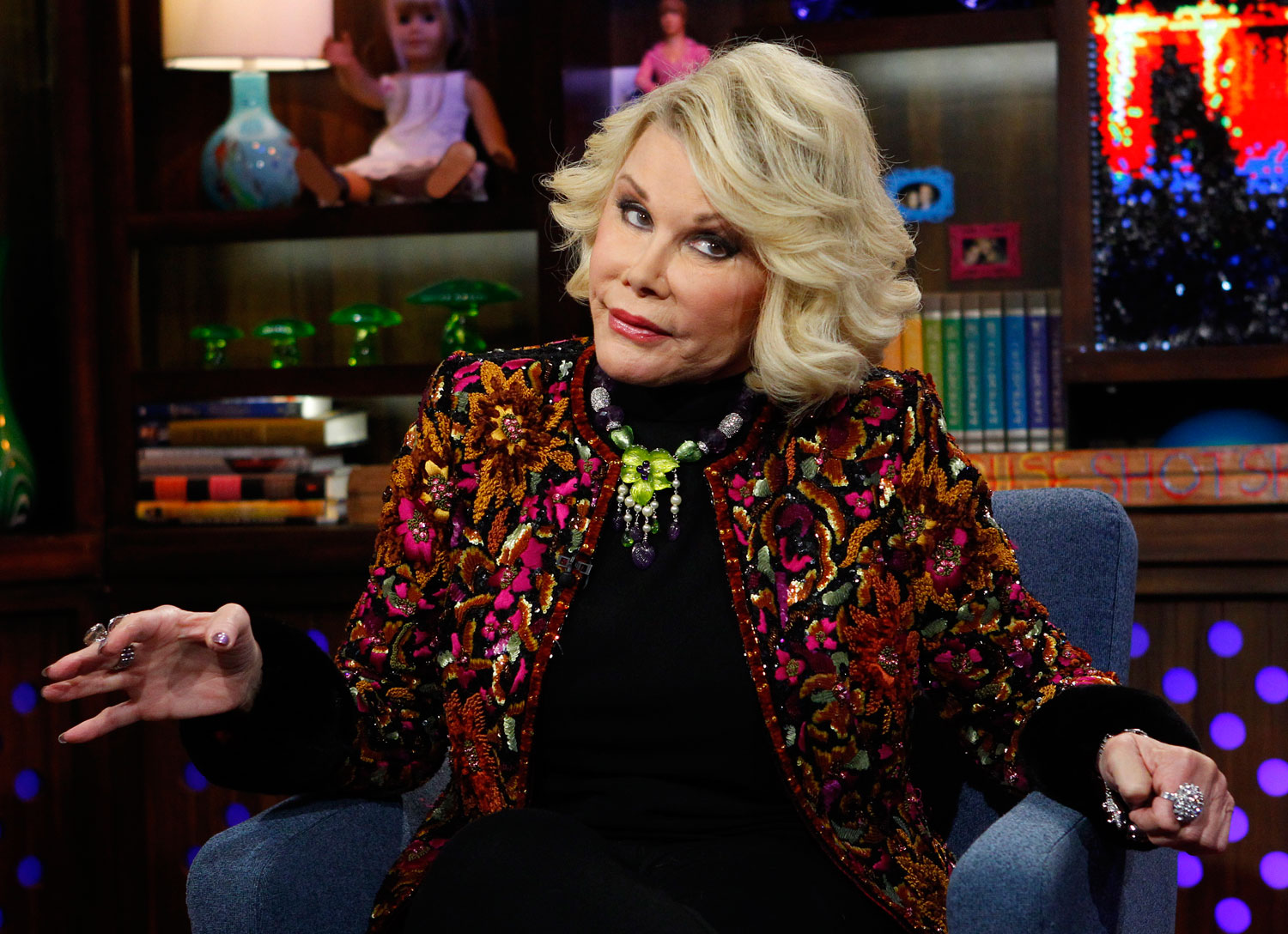 The death of Joan Rivers sent me back to Christopher Hitchens’s notorious 2007 Vanity Fair piece, “Why Women Aren’t Funny.” I had forgotten how idiotic it was. Women aren’t funny, Christopher argued—barring a few who are “hefty or dykey or Jewish”—because they don’t need to attract men by making them laugh. Women already have men’s attention, because they control sex. Look, boys, breasts! Also, women give birth to babies, and that makes them serious. Just ask Rudyard Kipling and Dr. Johnson, those noted experts on female psychology.

Joan Rivers contended with that mentality her whole life: like so many other things valued by society, comedy had a big No Girls Allowed sign on the door for most of her career. (Incredibly, she is still the only woman to have had her own late-night talk-show on network television—that was in 1986, when she ran in the same time slot as her mentor, Johnny Carson, who never spoke to her again; the show lasted seven months.) Women were, and to some extent still are, meant to be pretty and sexy and pleasant and deferential (as Christopher explained it, the male need for deference lets women control them all the more cleverly). They should laugh at men’s jokes, not make jokes themselves—especially dirty ones.

I wasn’t a huge Rivers fan. I love Jewish humor—Harvey and Sheila forever!—but Rivers’s brand was too misogynistic and self-hating for me. Some of her jokes at her own expense were like Catskills take-my-wife routines with the pronouns changed. “My best birth control now is just to leave the lights on.” “My love life is like a piece of Swiss cheese; most of it’s missing, and what’s there stinks.” Male comics mock their aging selves and flagging love lives too, but there’s usually some affection in there. But then, men don’t have to contend with the viciousness and contempt society visits on the aging female body. Aging, as in 35.

Rivers broke a lot of taboos—she made jokes about abortion back when you had to call it an “appendectomy,” and her early riffs on women and men in the dating game are still relevant: she’s an old maid at 30 (well, today it’s 35, so progress!); he’s a catch at 90, even if he’s dead (“Bring him along…! We’ll say he’s quiet”). But in later years, her comedy was less about ribbing misogyny than participating in it. Her plastic surgery was, face it, grotesque and sad. (But was the surgery actually a job requirement? I suppose you could see it as a kind of performance art. “I’ve had so much plastic surgery, when I die they’ll donate my body to Tupperware.”)

In her last act, Rivers specialized in bashing other female celebs—their looks, their clothes, their weight, their sex lives. Liz Taylor is fat, Lindsay Lohan’s a drunk. (Her cattiness got her an audience—her show Fashion Police was a hit for the E! network.) Sometimes the free-floating hostility and say-anything transgressiveness worked, like when she said of supermodel Heidi Klum, “The last time a German looked this hot was when they were pushing Jews into the ovens.” The Anti-Defamation League thought that joke insulted Holocaust survivors, which I really don’t understand. Holocaust humor is a way of keeping the memory alive. Reverence entombs. In recent interviews, Rivers could say cruel and hateful and bigoted things as if they were daring truths: Palestinians deserved to die in Gaza; Hamas was “elected by a lot of very stupid people who don’t even own a pencil.” Like others praised as equal-opportunity insulters for whom nothing is sacred, Rivers was not always above kicking people when they were down. It’s just that one of those people was herself.

Rivers wasn’t the first female comic to be raunchy—but she was perhaps the first to exploit the aggression and despair and neediness and hostility and disgust with physical life in a human body that underlies so much contemporary stand-up. And her boldness inspired other women to do their own takes on those rich themes. Seven years after Christopher wrote those silly words, we’re living in a golden age of female comics—women who are easily as ribald as men and who turn the sweet-demure-sexy role inside out: Tina Fey, Amy Poehler, Sarah Silverman, Margaret Cho, Maya Rudolph, Chelsea Handler, Amy Schumer, Samantha Bee, Wanda Sykes, Lizz Winstead, Kristen Wiig, Melissa McCarthy, Jessica Williams and many more whose names I should know. If you doubt that comedy is the power position, compare Julia Louis-Dreyfus’s hilariously ambitious and amoral first female vice president in Veep with Geena Davis as the noble, virtuous first female president in the earnest TV drama Commander in Chief a few years back. Which one shows more confidence that a female president is in the cards? There’s still a long way to go—women are still largely shut out of comedy writing—but it’s hard to imagine the claim that they aren’t funny being a magazine headline today.

“I don’t see many comics doing her style,” Lizz Winstead tweeted a few days after Rivers’s death, “but I do see a lot of smart women owning their truth.” That truth might be Gillian Robespierre and Jenny Slate making Obvious Child, a rom-com in which a young comic has an abortion that does not lead to death, misery or breakup. Or it might be Melissa McCarthy playing fat women who are comfortable with themselves. Or Margaret Cho riffing on her tattoos. Or Tina Fey and Amy Poehler crushing on Hillary Clinton. Or Wanda Sykes suggesting that the government curb the defense budget by hiring a working single mother to do the shopping.

Will these women be allowed to age in public, to have second and third acts in which they share the truths they find in middle age or even after, as male comics have always been allowed to do and even been celebrated for? Last year, Sarah Silverman was brutally mocked as aging by Jonah Hill. She was 42. I’d like to watch Silverman crack her gross jokes on screens large and small when she’s 70—and wearing her original face while she does it, too. That would be some tribute to Joan Rivers, truth teller.