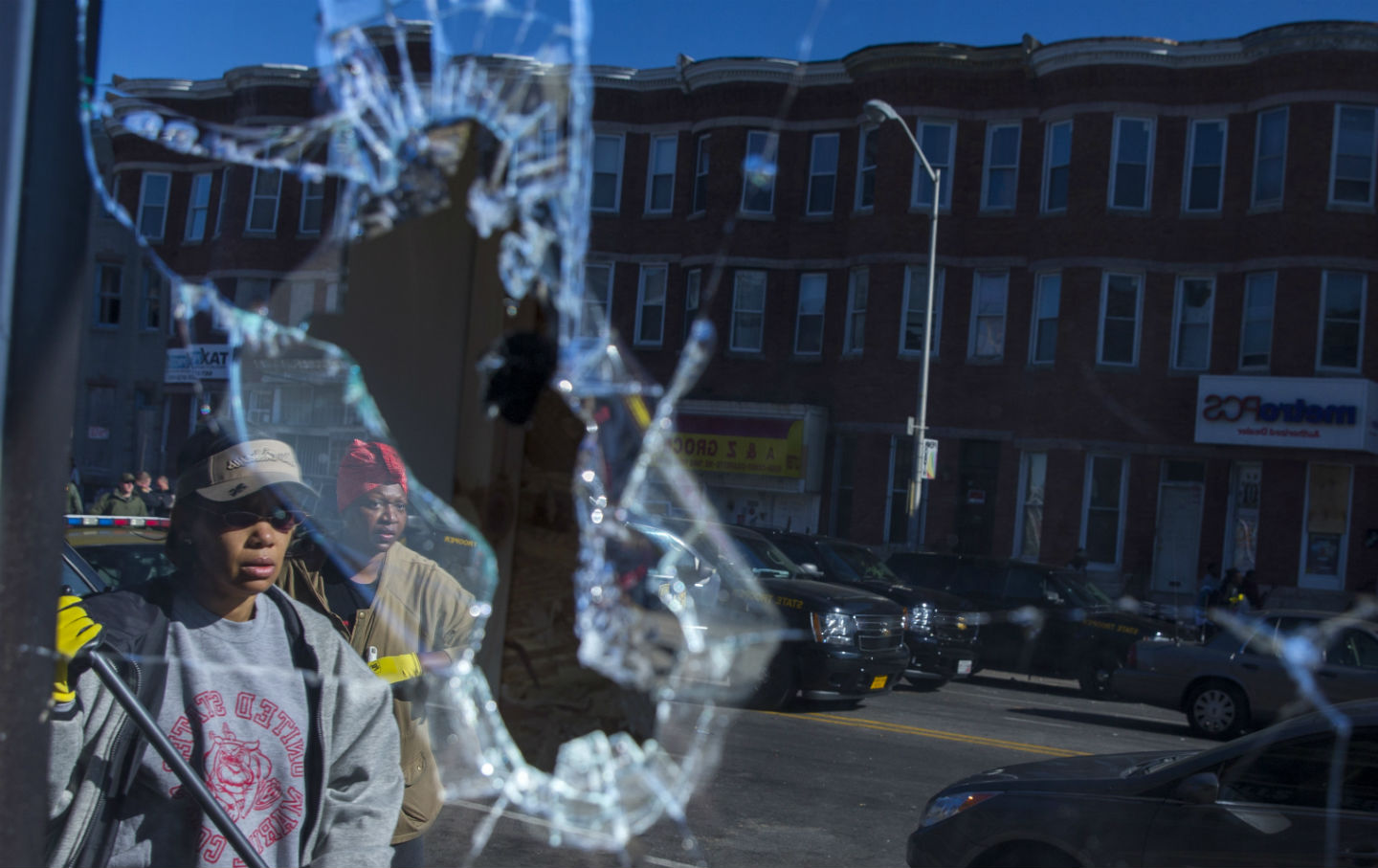 Residents, reflected off broken glass, clean up after an evening of riots following the funeral of Freddie Gray. (AP Photo/Evan Vucci)

As Reverend Jesse Jackson spoke of Freddie Gray’s funeral last week, he told mourners that “Baltimore police became the pallbearers of an alive man and turned the paddy wagon into a tombstone.” But in his remarks he reminded listeners that Gray was a martyr whose death “has taken the scab off the wound of a cancer that raises bigger questions.” On Tuesday, Jackson spoke to The Nation about the structural violence, inequality and poverty in Baltimore and how Gray’s death and the protests that have followed it should be a starting point for redressing these “bigger questions.” This interview has been edited and condensed for clarity.

The Nation: Can you tell us what you’ve seen happening in Baltimore over the past month since Freddie Gray was killed?

Jesse Jackson: Now the media tend to interchange quietness and peace. But quietness is just the absence of noise. Peace is the presence of justice. The people in Baltimore are quiet with the military walking every block, but they haven’t sown peace because there’s no basic justice. With the mayors and officers and officials, there’s a tendency to measure them as “riot stoppers” once the fuel was lit by the killing. But invariably in these urban crises, we know a combination of police excessive force, poverty, humiliation always drive this arrangement.

But what are some of underlying issues behind this?

It’s not just about black and white. It’s investment and disinvestment. For example, in downtown Baltimore, on one side of the great divide, you have access to TIF money and bank loans and investment and pensions and government institutions. On the other side, you do not have those resources. And on the side where you have the deficit, the focus is more on police and containment than it is on growth. On one side of town, you have 35-plus unemployment and 20 to 25 percent living in poverty; you have 18,000 vacant homes after the housing crisis. The banks that drove that with subprime lending and predatory lending were fined. But the fines didn’t correspond to the damage done. And when the banks got bailed out, the people got left out. There was no recovery plan for them. And 80 percent of police don’t come from Baltimore, so the police come in as occupiers; they don’t come in as neighbors. They get choice jobs from the city. A honey bee gets nectar from a flower, then sows pollen where it picks up nectar so that the flower can regenerate. But they get their nectar from the city but sow their pollen in the suburbs or other places. It’s not reciprocal, not regenerative. And they come in with a certain psychology. These people are not their neighbors. And the police are almost inherently corrupt. And they may not be on the take, but the police will not police other police. Then the real estate agents compound it by directing people on where to live and where to buy. It’s not that you can’t live certain places by law, but that you’re directed to certain places by culture and by habit.

But these aren’t problems that are limited to just Baltimore—

Well, you know you have these structural race and class resource divides. You have such a divide that effort and excellent is trumped by inheritance and access. So one side gets resources sufficiently in the surplus, one side just resources in the deficit. So when you look at employment, investment, dropout rates, access to jobs, life expectancy, infant mortality, Baltimore is almost a metaphor for urban America, from Chicago to New York to Detroit to Memphis. Two months ago, we were down in Selma to mark the 50th anniversary of the Voting Rights Act. What struck me was Dallas County, where Selma is, is about 40-plus percent in poverty, with houses up and down the streets boarded up. We come to Selma to say this is what Selma has done for us. But we’ve not done much for Selma. Selma is sinking in poverty. We’ve seen more about poverty this week than in the last several years. And everybody knows that the fuel that burns in places like Baltimore is poverty.

Then what do we have to do to address these imbalances?

You look at the Ravens and the Orioles in downtown Baltimore—what makes those games significant, interesting is that the playing field is even and the rules are public and the goals are clear and the referees are fair. But the people in Baltimore are playing on an uneven playing field. So they’re free but not equal. And freedom without equality is unfair. Yesterday all the focus was on “there was not another again,” as if riots draw attention and a lack of riot is our victory. Victory is equality of opportunity. There is no identifiable plan to equalize the playing field. The media have laid out the deficits in police relations and unemployment and wealth gaps. Now you need a summation and a plan to offset the deficits, a plan to even the playing field and, therefore, create prosperity.

So where do we start with this plan?

Now the attorney general is going to Baltimore today. But it seems to me that no one is saying, “Where is the Secretary of Housing and Urban Development? Commerce? Labor? Health and Human Services? Where are government institutions?” Because really there’s a role for these institutions. Baltimore could be a model for urban reconstruction. The federal government has a role to play in urban reconstruction. But we don’t see any such plan. The leadership on the ground level can call for it, but the president can convene an urban summit in Baltimore. You also need a development bank. Conventional banks will not lend to the West and East sides. There should be tech centers to help young people get jobs. Look at the block after block of boarded houses. If you move those boards and begin to put in window panes and remove lead paint and you begin to paint and the like, you’d create thousands of jobs almost overnight. When the walls come down, it lays the groundwork for growth. The government must help correct these wrongs. It’s the only institution that has the power to put forth to correct these wrongs. No private institution can do that alone. That’s where the vision of the Great Society comes from.

It has to be! We cannot look cynically upon the Great Society. That was work that got distracted because of the Vietnam War, but it was working. Head Start worked. Daycare worked. The Fair Housing Act worked. Medicaid worked. Medicare worked. There’s this prevailing notion that somehow the Great Society failed. It was winning. It stopped before the war was over. But because of it more people went to college. More people came out of poverty. More folks had affordable housing than ever before. Instead, what we’re looking at now are extremes in wealth and poverty.