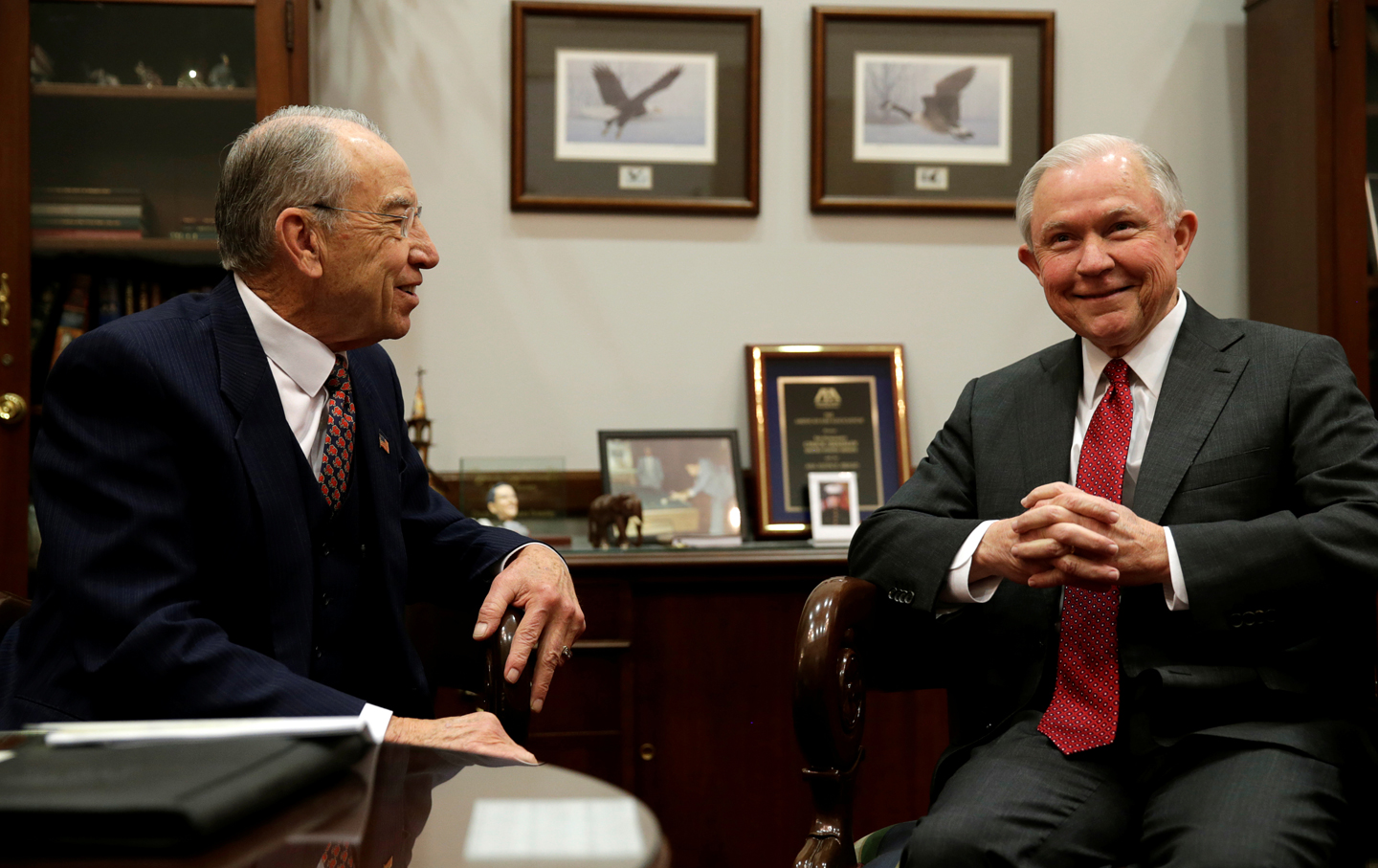 On June 27, 2013, two days after the Supreme Court ruled that states with a long history of voting discrimination no longer needed to approve their voting changes under the Voting Rights Act, the mayor of Pasadena, Texas, proposed changing the structure of City Council elections so that whites could remain in control. With Latinos close to gaining a majority of seats in the racially divided city of 150,000 outside of Houston, Mayor Johnny Isbell proposed switching from eight City Council districts to six districts and two seats elected citywide—which would give white residents, who turn out in higher numbers, a better shot at electing their preferred candidates. The net effect was that one majority-Latino district was eliminated, and Latinos had three fewer seats on the council.

Isbell proposed the change “because the Justice Department can no longer tell us what to do.” Voters narrowly approved the referendum in 2013, even though 99.6 percent of Latinos opposed it.

On Friday, a federal district court in Texas found that white officials in Pasadena “intentionally discriminated against Latinos.” The court ordered new elections under the previous districts and, because of the finding of intentional discrimination, required Pasadena to approve all future election changes with the federal government for at least five years. It is the first jurisdiction to be subject to preclearance requirements since the Supreme Court’s Shelby County v. Holder decision.

In 2013, Jeff Sessions, Donald Trump’s nominee for attorney general, cheered the gutting of the Voting Rights Act, calling it “good news…for the South.” He claimed, “If you go to Alabama, Georgia, North Carolina, people aren’t being denied the vote because of the color of their skin.”

In fact, as the decision in Pasadena shows, there is ample evidence of ongoing voting discrimination throughout the South (and beyond). Sessions’s home state of Alabama tried to close 31 DMV offices, many in majority-black counties, after instituting strict photo-ID requirements to vote. “In the 10 counties with the highest proportion of minorities, the state closed driver’s license offices in eight,” wrote Kyle Whitmore of AL.com. The US Department of Transportation found that the closures violated the Civil Rights Act of 1964, and Alabama agreed last month to increase hours as part of the federal settlement.

Elsewhere, North Carolina passed the country’s worst voter-suppression law in July 2013, which the US Court of Appeals for the Fourth Circuit said targeted “African-Americans with almost surgical precision.” Georgia was found to have illegally purged tens of thousands of voters, who were disproportionately people of color, from the rolls. Texas’s voter-ID law was judged to be discriminatory by the very conservative US Court of Appeals for the Fifth Circuit. And on it goes.

Sessions seemed clueless about the details of the challenge to the Voting Rights Act. “Shelby County [Alabama] never had a history of denying the vote, certainly not now,” he said. “There is racial discrimination in the country, but I don’t think in Shelby County, Alabama, anyone is being denied the right to vote because of the color of their skin.” In fact, Shelby County found itself in court after the city of Calera ousted the only black city council member by reducing the percentage of African-Americans in his district from seventy-one to thirty percent—a textbook example of the type of voting discrimination that the Voting Rights Act was designed the stop.

Last year, Sessions awarded the Congressional Gold Medal to the foot soldiers of the Selma movement, but has refused to support restoring the Voting Rights Act that many of them nearly died to win.

As Trump’s attorney general, Sessions could be disastrous to voting rights in a variety of ways. He could support a federal voter-ID law and/or a proof of citizenship law for voter registration, which would disenfranchise millions of eligible Americans. He could pressure states to purge their voting rolls in discriminatory and inaccurate ways and force US Attorneys to prosecute bogus cases of voter fraud, which happened during the George W. Bush administration. He could switch sides in cases the Justice Department is arguing under the Voting Rights Act against states like North Carolina and Texas, which are on appeal to the Supreme Court, and question the constitutionality of the remaining parts of the VRA. He could bring reverse discrimination suits on behalf of whites instead of historically disenfranchised communities.

Sessions has received renewed scrutiny recently for his unsuccessful 1985 prosecutions for voter fraud of three civil-rights activists from Perry County, Alabama, including Albert Turner Jr., a close aide of Martin Luther King Jr. who was brutally beaten by police on Bloody Sunday in Selma. The prosecutions were not an isolated incident but revealed a more disturbing pattern from Sessions, which led to him being rejected for a federal judgeship in 1986.

Gerry Hebert, a lawyer in the Justice Department’s Civil Rights Division, testified that Sessions had called the NAACP and ACLU “Communist-inspired” and “un-American” organizations that were “trying to force civil rights down the throats of people.” Thomas Figures, who worked under Sessions as the first black prosecutor in Alabama, said that Sessions had called him “boy” and told him “to be careful what I said to white folks.” Sessions said the Voting Rights Act was “an intrusive piece of legislation.”

“Mr. Sessions is a throwback to a shameful era which I know both black and white Americans thought was in our past,” Ted Kennedy said in 1986. “It is inconceivable to me that a person of this attitude is qualified to be a U.S. attorney, let alone a U.S. Federal judge…. He is, I believe, a disgrace to the Justice Department and he should withdraw his nomination and resign his position.”

Thirty years later, there’s little evidence to suggest that Sessions has changed his views. He has consistently opposed efforts to enforce the country’s civil-rights laws, to make it easier to vote, or to bring more diverse representation to his home state. He remains, unique among all attorney-general nominees, an advocate for the Old South he grew up in.

In his Senate questionnaire for attorney general, Sessions lists the Perry County prosecutions as one of the 10 most significant cases he handled. He has never apologized or admitted he did anything wrong.

In an attempt to repair his reputation, Sessions also lists four civil-rights cases he “personally” worked on, including litigation that successfully dismantled discriminatory election systems in the Alabama Black Belt, including in Selma, leading to the election of the first black elected officials on the county commissions and school boards of places like Dallas and Marengo counties. But lawyers with the Civil Rights Division say Sessions did no work on these cases and they put his name on the briefs simply because he was US Attorney at the time.

“Those were my cases,” Gerry Hebert says of the litigation in Dallas and Marengo counties. “He played no role in either of them. When I filed the briefs, I put his name on them, but he never saw them. He had no role whatsoever in filing or approving these cases.”

After stepping down as US Attorney in Mobile, Sessions served as attorney general of Alabama from 1995 to 1997. There, he opposed litigation brought by civil-rights groups and agreed to by his predecessor that would have led to the first black judges being appointed to the Alabama supreme court, court of criminal appeals, and court of civil appeals.

More recently, Alabama State Senator Hank Sanders and other black political leaders from Alabama met with Sessions to ask him to support African-American judges the Obama administration was planning to nominate for vacancies on the federal districts courts in Montgomery and Birmingham and the court of appeals in Atlanta. “Nothing came out of it and the positions are still not filled,” says Sanders. “There was no movement on his part. The Obama administration didn’t want to nominate somebody that Sessions would just kill.” If Sessions had pledged not to oppose the nominees, Obama would have nominated three black judges to fill crucial vacancies, Sanders says.

“During the 20 years Jeff Sessions has been in the U.S. Senate, only one black person has been appointed as a federal judge in a state that is 26 percent African American,” Sanders wrote in the Selma Times-Journal.

Time and time again, Sessions has taken positions that would make it harder to vote, which give a disturbing preview of what he’d do as the nation’s top law-enforcement official.

Sessions has perpetuated the myth of voter fraud to support new restrictions like voter-ID laws. “We have seen fraud repeatedly and there is a problem if you don’t use an ID when you go to vote, because you can vote for some other name that you know is not available to vote that day,” he told CNN in August, while echoing Trump’s bogus claim that Democrats were “attempting to rig this election.” (There have only been four cases of voter fraud in 2016 out of 135 million votes.)

He has called on previous attorneys general, including Eric Holder, to aggressive push states to purge their voting rolls. On the 50th anniversary of the Selma to Montgomery march, he told Amy Goodman of Democracy Now! that he opposed early voting, same-day registration and voting rights for ex-felons. Here’s the exchange:

AMY GOODMAN: Senator Sessions, one last question: the question of why not make voting easier for people in this country; let people vote early, longer days; the whole issue of opening up the voting process so that people can feel welcomed into the process?

SEN. JEFF SESSIONS: Well, I’m uneasy about this law on pre-voting. Things happen between two weeks or more to the Election Day, and oftentimes people are—are, you know, urged to go to vote and vote before they’re ready to vote. And so I think there’s nothing wrong with voting on Election Day. That’s the way we’ve had since the founding of the republic. I just told you—

GOODMAN: But especially for poorer people, when it’s hard to, in a working day, be able to get out and vote.

SESSIONS: No, I think same-day registration is very dangerous.

SESSIONS: Well, because it can allow fraud to occur, and people can vote more than once.

SESSIONS: Well, it depends on the conviction and depends on the state, but that’s historically been the rule. You’ve been convicted of a serious offense; most states, at one time or another, have denied people the right to vote.

SESSIONS: Alabama, you can get citizenship restored, I think, after you complete your time in jail for some crimes, but I don’t really know the details of it.

At a time when there’s the greatest need to protect voting rights since 1965, Sessions would take America back to an era when the government was on the wrong side of civil rights.