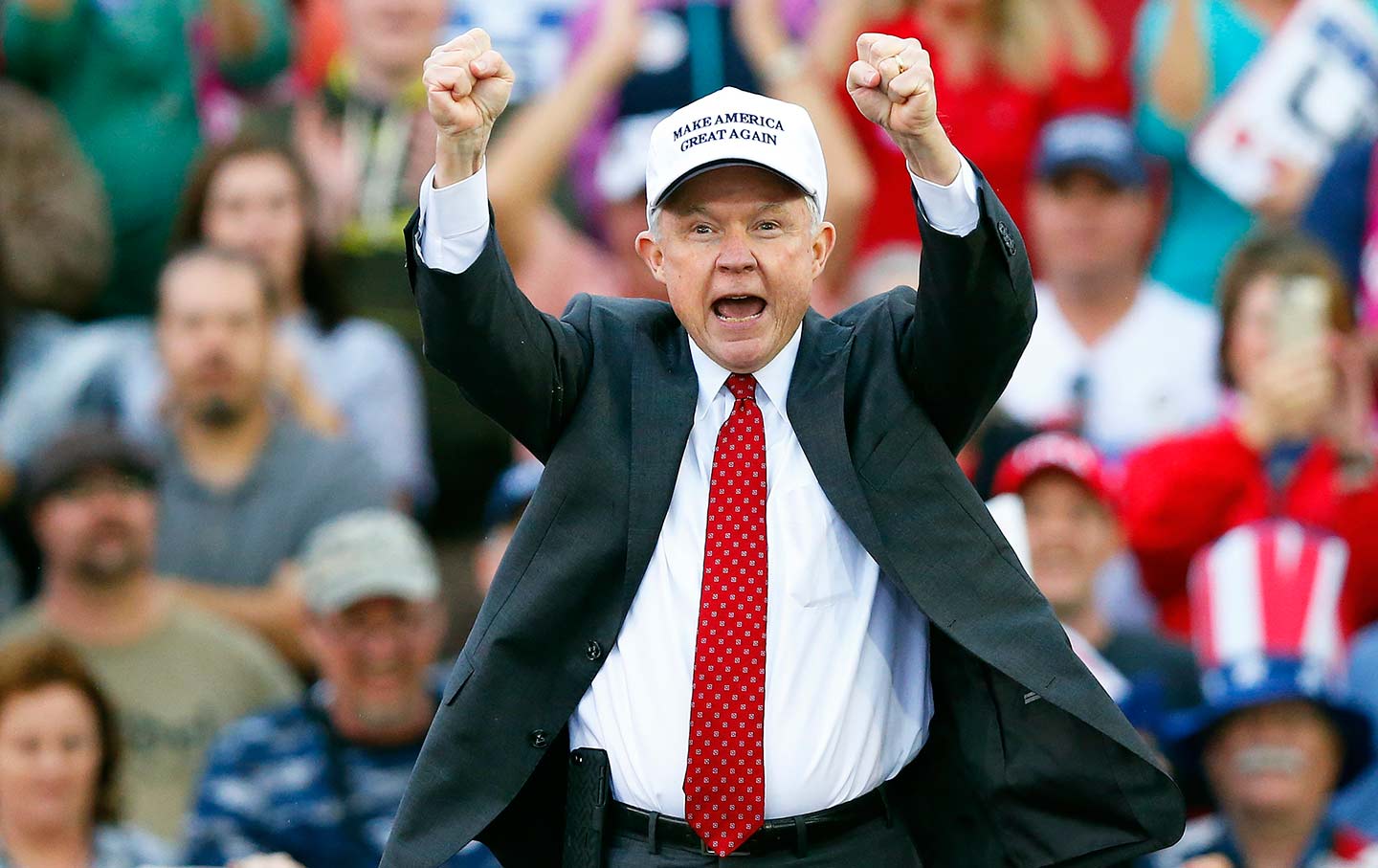 On September 12, 1986, Earl McGahee, a 29-year-old African-American man, was convicted of murdering his ex-wife and another student at George Wallace Community College in Selma, Alabama, and sentenced to death. Though the trial took place in Selma’s Dallas County, which was 55 percent black and the birthplace of the Voting Rights Act, McGahee was convicted by an all-white jury because prosecutors struck all 24 eligible African-American jurors from the case. Six black jurors were removed for “low intelligence,” the prosecution said.

As Alabama’s attorney general from 1995 to 1997, Jeff Sessions defended the prosecutor’s actions when the case was appealed. The district attorney for Dallas County, Roy Johnson, who oversaw the McGahee prosecution, had also recommended that Sessions prosecute three longtime civil-rights activists in Alabama for voter fraud—a trial that Sessions lost and that contributed to his being blocked for a federal judgeship in 1986. Sessions called Johnson an “outstanding prosecutor” and a “personal friend.”

“When he was attorney general, we had a horrific problem of racial bias in jury selection,” says Bryan Stevenson, the renowned civil-rights lawyer and executive director of the Equal Justice Initiative in Montgomery, Alabama. “Before Sessions took office, courts had reversed 23 cases where there had been intentional exclusion of people of color on juries and his office defended most of those cases…. He was defending the prosecutor’s conduct in the McGahee case and saying it was not unconstitutional or illegal or discriminatory, despite the fact that all 24 African Americans who qualified for jury service were excluded.”

Stevenson argued McGahee’s case on appeal and in 2009 the US Court of Appeals for the 11th Circuit vacated his death sentence, citing “intentional discrimination” by the prosecution and an “astonishing pattern resulting from the total exclusion of African-Americans.” When his sentence was overturned, McGahee had been on death row in Alabama for 23 years.

Stevenson, who has been a civil-rights lawyer in Alabama for over 25 years, says the McGahee case is just one example of Sessions’s extreme and increasingly outdated views on crime and punishment and racial justice. This is particularly noteworthy given that Sessions was blocked as a federal judge in 1986 for his discriminatory actions and views, and has done little to support racial equality since then. As Trump’s attorney general, Sessions would almost certainly roll back the Obama administration’s efforts to make the criminal-justice system more fair and just in areas like policing, incarceration, and private prisons.

When Alabama became the first state to bring back the use of chain gangs in 1995—a horrific remnant of Jim Crow—Sessions, as Alabama attorney general, defended it as “perfectly proper.” (The chain gangs were scrapped after a year because of a federal lawsuit.)

As a US senator since 1997, Sessions “is one of few Republican legislators who does not support bipartisan efforts to reform the nation’s criminal justice system,” according to a new report by the Brennan Center for Justice. Sessions personally blocked bipartisan legislation supported by Senate Judiciary Committee Chairman Chuck Grassley and House Speaker Paul Ryan that would’ve reduced unnecessarily long sentences for nonviolent crimes. He’s opposed consent decrees between the Justice Department and cities like Ferguson and Baltimore to reduce police misconduct, calling it “one of the most dangerous, and rarely discussed, exercises of raw power.” He opposes efforts to end mandatory minimum sentences for nonviolent drug offenses or to decriminalize marijuana, saying last year “good people don’t smoke marijuana.” When he was US Attorney for the Southern District of Alabama from 1981 to 1993, 40 percent of his convictions came from drug offenses—double the rate of other Alabama prosecutors.

“We haven’t heard or seen anything from him that suggests there’s a problem with the criminal justice system: overcrowding in prisons, excessive sentencing, bias, abuse of power, politicized sentencing,” says Stevenson. “That will contrast dramatically with previous attorneys general.”

Stevenson says members of the Senate Judiciary Committee need to ask Sessions during his confirmation hearings this week: “Are you going to continue to pursue remedies for these serious violations, or are you going to retreat to the chain-gang days where things were ‘perfectly proper?’”

Violations of the criminal-justice system have been particularly acute in Alabama, where African Americans make up 26 percent of the population but 54 percent of prisoners. A federal investigation into Tutwiler Prison for Women in Wetumpa, Alabama, found that 60 percent of guards sexually abused and assaulted women prisoners. Abuses detailed at male prisons in Alabama by the Equal Justice Institute include:

In October 2016 the Justice Department announced it was opening a wide-ranging investigation into Alabama’s prisons, focusing on “whether prisoners are adequately protected from use of excessive force and staff sexual abuse by correctional officers, and whether the prisons provide sanitary, secure and safe living conditions.” Sessions has said nothing about these abuses, Stevenson says, and should be asked if he’ll continue the federal investigations if confirmed as attorney general.

Already, there’s a disturbing pattern of Alabama officials’ resisting federal law. After the Supreme Court legalized gay marriage, the Chief Justice of the Alabama Supreme Court, Roy Moore, said he would refuse to issue marriage licenses to gay couples. (He’s since been suspended and is rumored as a contender for Sessions’s Senate seat.) When the Supreme Court overturned the death penalty for juveniles in 2005, Alabama Supreme Court Justice Tom Parker, who worked for Sessions when he was Alabama attorney general, said the Alabama Supreme Court should ignore the order. “State supreme courts may decline to follow bad U.S. Supreme Court precedents because those decisions bind only the parties to the particular case,” Parker wrote. Stevenson says Sessions has been similarly silent on these issues and should be asked: “Do you believe that state judges can defy federal law?”

More than any nominee for attorney general in modern American history, Sessions would be an unapologetic defender of the old Confederacy and has refused to criticize policies that stem directly from Jim Crow. For example, Alabama’s 1901 Constitution still includes language authorizing a poll tax and segregated schools. Referendums to remove such language—which Sessions failed to support—were defeated by voters in 2004 and 2012. Interracial marriage was illegal in the state until 2000. When Sessions was state attorney general, there were still officially segregated proms in the state.

Last year, after the massacre of nine African Americans in Charleston, South Carolina, Alabama Governor Robert Bentley removed the Confederate flag from the grounds of the Alabama statehouse. When he was asked about it, Sessions, who is named after a Confederate general, said, “I’m not going to criticize the governor,” but defended Confederate history. “This is a huge part of who we are and the left is continually seeking, in a host of different ways, it seems to me, I don’t want to be too paranoid about this, but they seek to delegitimize the fabulous accomplishments of our country.”

“There was a lot of nostalgia and comfort with the iconography of the Confederacy,” Stevenson says. “That’s unprecedented in a nominee for attorney general.”