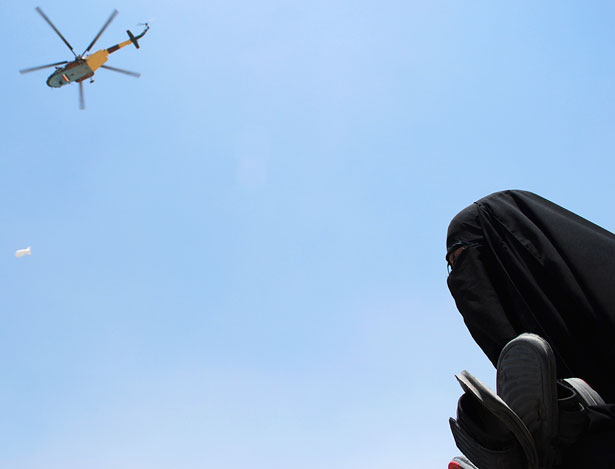 After the United States spent $1 trillion fighting an illegal war in Iraq, leaving 4,500 Americans and hundreds of thousands of Iraqis dead, one can make a plausible case that the carnage now plaguing the dysfunctional New Iraq is America’s responsibility. But it’s not. The United States is no longer responsible for Iraq, and for all the devastation that George W. Bush wreaked in that battered country, the United States ought to stay out.

Prime Minister Nouri al-Maliki is in Washington this week to argue the opposite, begging for arms from the United States—without a lot of success, it seems—and pretending that he’s not a Shiite-sectarian autocrat who is more or less allied with Iran.

As I’ve documented repeatedly here since April, the return of Iraq’s Sunni-led insurgency, partly linked to Al Qaeda and its affiliate in Syria, has led to an enormous upsurge in violence. In the past six months, about 7,000 Iraqis have died as the result of a wave of coordinated car bombings, suicide bombs, assassinations and other actions. (Compare that to Syria, where about 100,000 people have died in two and half years of civil war, and you’ll notice that the pace of killings in Iraq isn’t far behind. And, as The Washington Post reported: “Killings in Iraq are now on pace to match the levels of 2008, the year that sectarian violence bordering on a civil war began to abate.”)

The conflict in Iraq has drawn the attention of General Lloyd Austin, head of the US Central Command, who said:

“If left unchecked, we could find ourselves in a regional sectarian struggle that could last a decade. What we are very worried about is a continued downward spiral that takes you to a civil war. It could easily get worse.”

It could, indeed, get worse. But it not America’s job—and certainly not General Austin’s job—to fix it. And certainly, the United States shouldn’t be arming Iraq, which is what Maliki wants.

It’s not likely that President Obama wants get involved in Iraq again, and sentiment in Congress seems dead-set against giving weapons to Maliki’s government. But it’s hard for the president—any president—to resist the momentum of the military-industrial complex and the US arms export industry, and so it does seem that the United States will soon be shipping advanced weapons to Baghdad. Iraq has already deposited $650 million as a down payment for a delivery of 36 F-16 jet fighters. In addition, Iraq wants (but may not get, just yet), despite the fact that Baghdad is being ably assisted by the Podesta Group, the Democratic Party–connected lobbying firm in Washington. As The New York Times reports, Maliki wants “Apache helicopter gunships [including Hellfire missiles], more American intelligence and other forms of counterterrorism support like reconnaissance drones that would be operated by Americans.”

The Times also suggests that the Al Qaeda presence in western Iraq, especially in Anbar Province, “makes them an inviting target for American drone strikes.” So far, though, that isn’t happening.

Maliki is ringing the terrorist alarm bell loudly, warning that spillover from the war in Syria is what’s behind the increased violence—and, no doubt, Islamist extremists in both Syria and Iraq and cooperating and crossing the border with impunity. (Al Qaeda in Iraq has reorganized itself into ISIS, the Islamic State of Iraq and Syria.) But if Maliki is looking for a prime source of the rebellion—which was mostly peaceful, inspired by the Arab Spring, until Maliki’s forces clobbered protesters in Anbar in April—he only needs to look in the mirror. Not only has he been an authoritarian leader since taking office, favoring Shiites and excluding Sunnis and Kurds from positions of power, but he appears to be setting himself up as yet another president-for-life, announcing in Washington this week that he’s mulling over the idea of running for a third term as president in 2014.

In an op-ed at Foreign Policy, the Senate’s two leading Republican hawks, John McCain and Lindsey Graham, blame everything on Obama, and they call for the United States to roll up its sleeves and get involved:

The Obama administration inherited a policy in Iraq that was succeeding in driving down levels of violence, significantly degrading al Qaeda in Iraq, and building a constitutional order in which differences could be resolved peacefully and politically. Five years later, Iraq is beset by escalating levels of violence, growing political polarization, and a resurgent al Qaeda in Iraq and Syria that now possesses a base of operations in the heart of the Middle East. The current failure in Iraq has unfolded on the Obama administration’s watch, and it is the president’s responsibility to devise a strategy to address these serious national security challenges.”

McCain and Graham say that Obama failed to capitalize on the vaunted success of the Bush-era surge of 2007–08, and they blame Obama for failing to maintain a contingent of American troops in Iraq since then. They add:

Today, Iraq is nearing a breaking point as the combination of internal tensions and external pressures generated by the conflict in Syria threaten Iraq’s stability. There is still a chance for Iraqis to halt their country’s downward spiral, and Prime Minister Maliki’s visit to Washington is an important opportunity for the Obama administration to affirm that Iraq is a top priority.

But Iraq isn’t a top priority. In 2003, it wasn’t any of America’s business to invade Iraq; destroy its government, its military and its police and its entire economic infrastructure; privatize its industries and trigger a Sunni-Shiite civil war. And in 2013, it isn’t America’s job to solve Iraq’s bitter conflicts.

Like the civil war in Syria, and the longer-running conflict inside Lebanon, the war in Iraq is a regional problem. It is, very much so, still part of the proxy war being waged in the shadows—and sometimes in the open—between Iran and Saudi Arabia for power and influence in this oil-rich part of the world. The best thing that Obama can do to help Iraq is to strike a deal with Iran that eases the political conflict throughout the region, find a political deal in Syria that lowers the level of struggle there, and nudge Saudi Arabia toward an accommodation in the Sunni vs. Shiite conflict.