The last time Amanda Morales walked outside—breathed the air, observed the sky, felt the pavement beneath her feet—it was summer: August 17, 2017, to be exact. The day was sparkling, the temperature hovering in the low 80s, and if Amanda’s life hadn’t been upended a few weeks earlier by a deportation order from US Immigration and Customs Enforcement (ICE), she might have spent the afternoon working at the factory where she made guitar and cello strings, or enjoying some backyard time with her three children, Dulce, Daniela, and David. Instead, Amanda and her kids found themselves trekking from their home on Long Island to a 104-year-old Episcopal church in Upper Manhattan with clothes, toys, and a pet fish. The church was about to become their new home.1 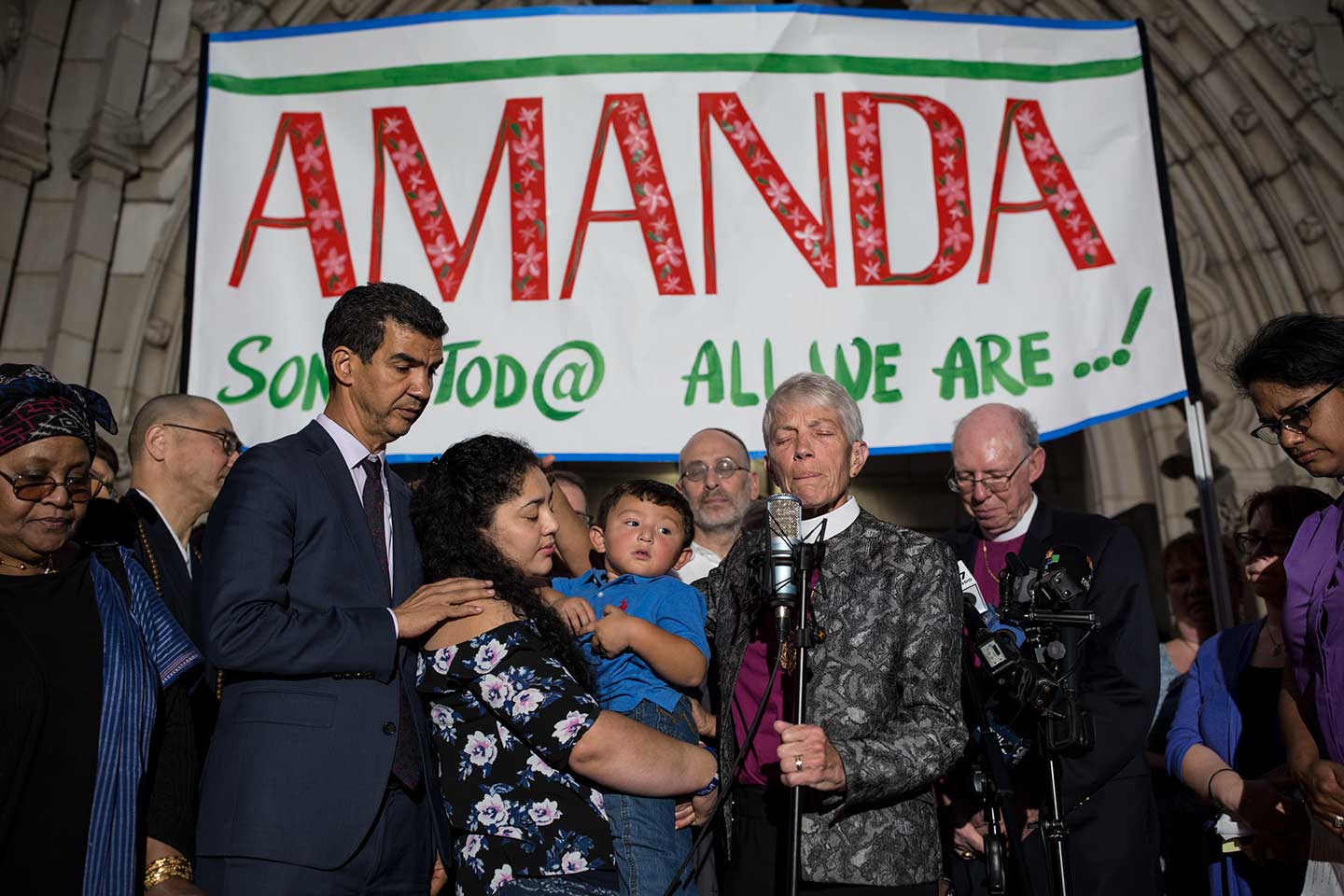 Amanda, now 34, stands in front of a thicket of media to announce her decision to take sanctuary. She is flanked by interfaith leaders and New York City Councilman Ydanis Rodríguez. Activists hope that publicity will help protect her from immigration agents. “It’s very hard for me to be in front of the cameras,” Amanda says. “I panicked when I saw all the journalists.” (Cinthya Santos Briones)

In moving into Holyrood Church–Iglesia Santa Cruz, Amanda joined a small but growing fraternity of immigrants, mostly undocumented, who have taken sanctuary in places of worship to avoid deportation to their native countries. The operating theory is that the federal government will not arrest people inside a church (or synagogue or mosque). It’s an idea that dates back to the original sanctuary movement of the 1980s, but it’s seen a resurgence in recent years, expanding in unhappy tandem with President Trump’s crackdown on immigrants.2

For the past seven months, the walls of Holyrood Church have performed their role well: They have kept Amanda safe. They have spared her deportation to Guatemala, where she fears her life will be in danger from gangs—the reason she fled in 2004—and they have allowed her to remain with her kids, all US citizens. They have surrounded her with a vital community that, under the leadership of the Rev. Luis Barrios, has transformed the church into a rare refuge from an increasingly hostile world.3 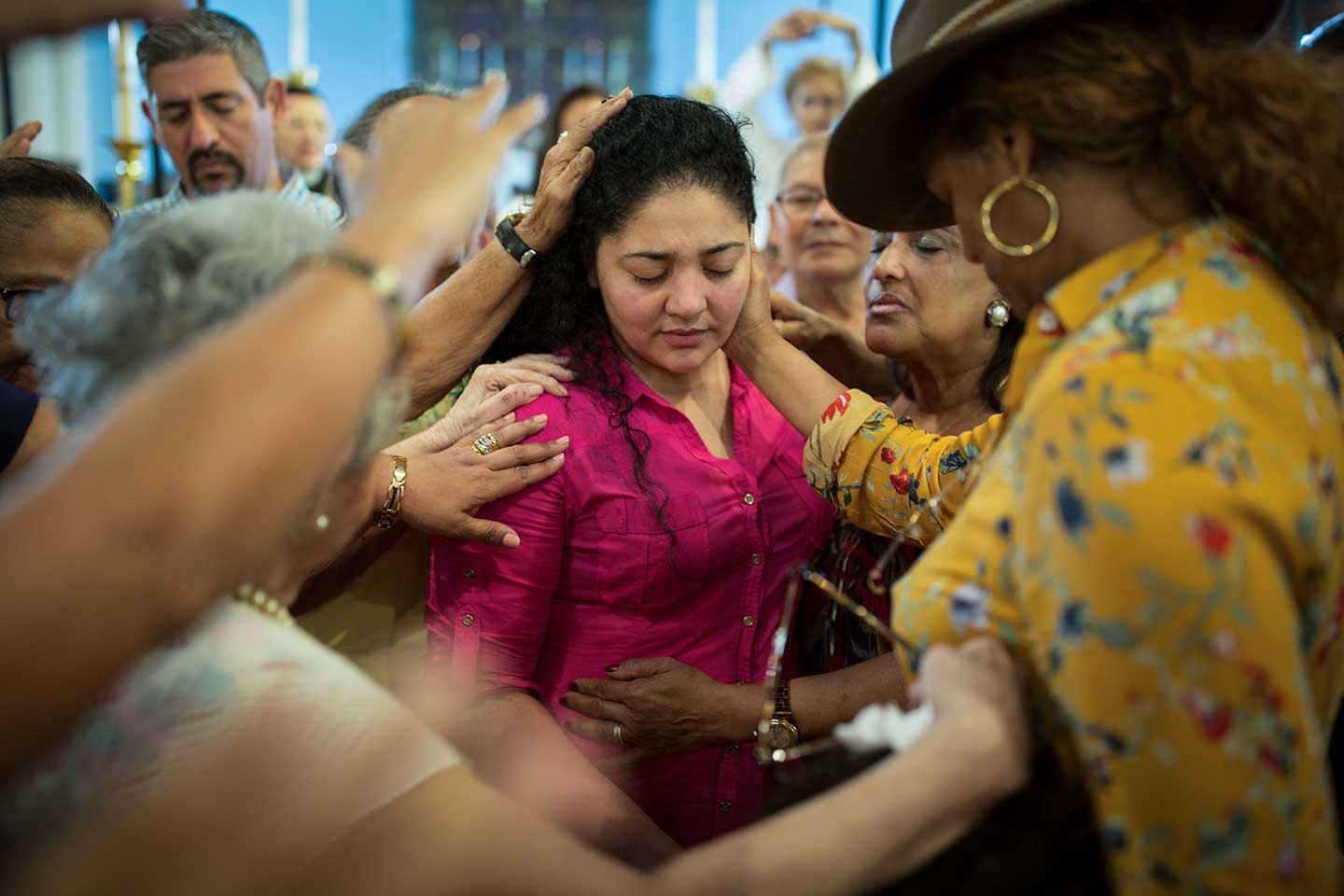 Congregation members bless Amanda at a Sunday mass. “Amanda is the force of our community, the face of many mothers who are being deported and separated from their children,” says the Rev. Luis Barrios. “We bless Amanda with our hands and souls.” (Cinthya Santos Briones)

Still, it has not been easy. Because Amanda cannot leave the church without risking arrest, she lives a life of virtual captivity. She sees the sun only indirectly, filtered through windows. And she has never visited her daughters’ new elementary school. Now that the asylum case she led recently has stalled, a stubborn despair has settled around her. “I’m so worried,” she says of the possibility of having to return to Guatemala. “You know I’d be in danger. It terrifies me.”4

Throughout all the ups and downs, Amanda has been brave and generous enough to let us document her life in Holyrood, to capture her attempt to build a new home in a church whose walls may—or may not—prove strong enough to keep her family together. The result is a multimedia series called “Finding Sanctuary,” a story about the consequences of political cruelty, but also a story of resistance and decency.5 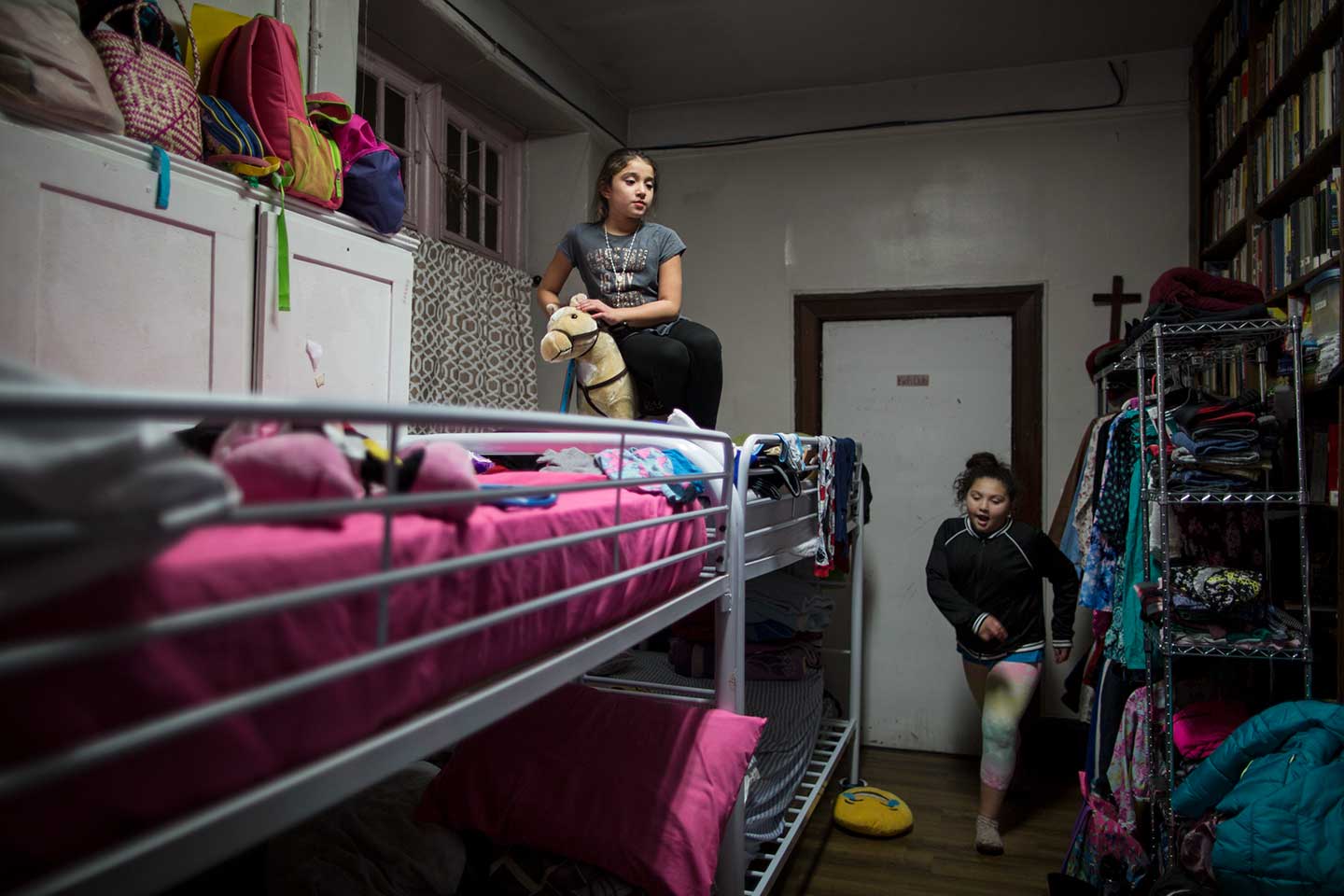 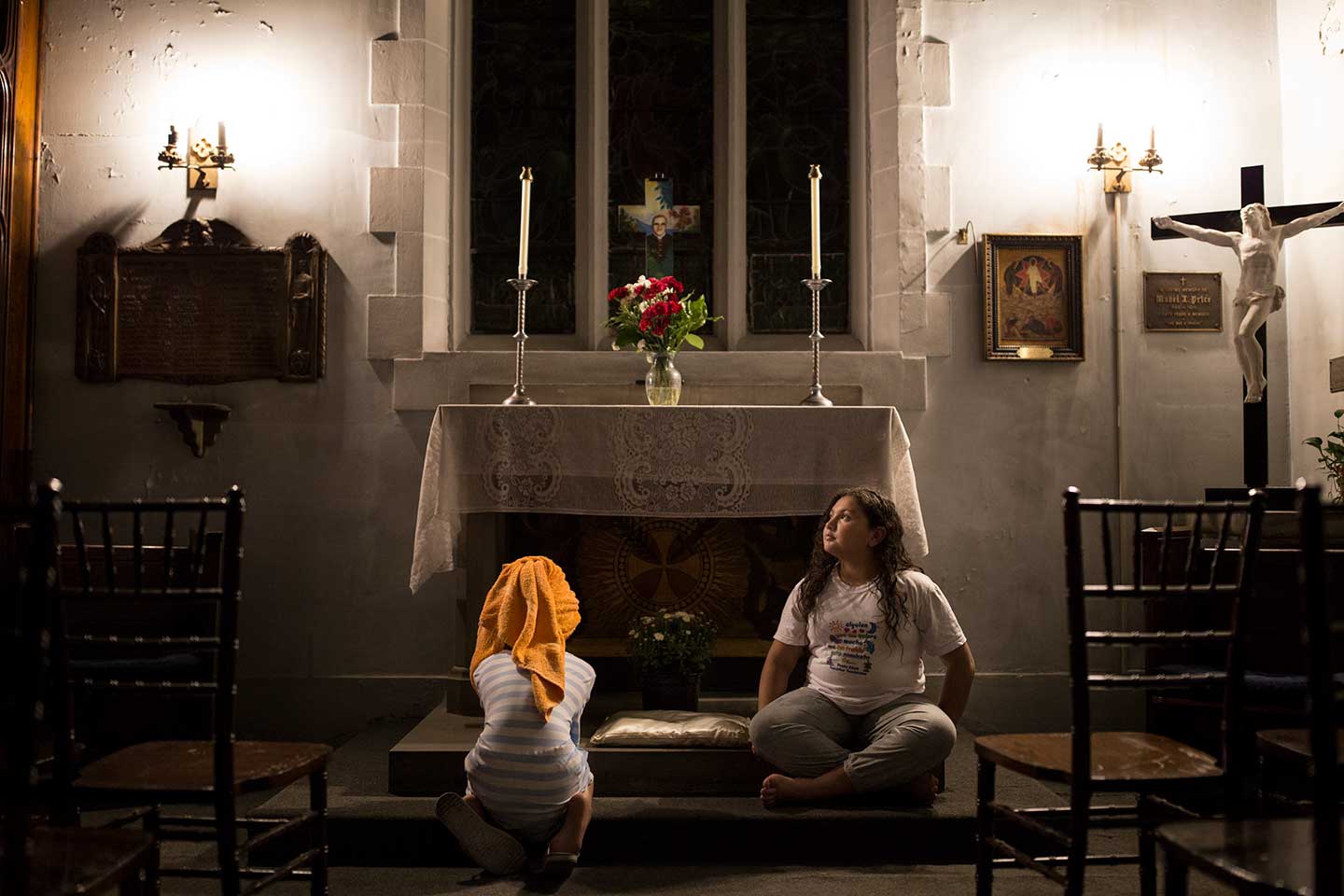 “We never thought we were going to live in a church,” says Dulce. “I feel like there are ghosts and that they see me. But I also like it. It’s beautiful.” (Cinthya Santos Briones) 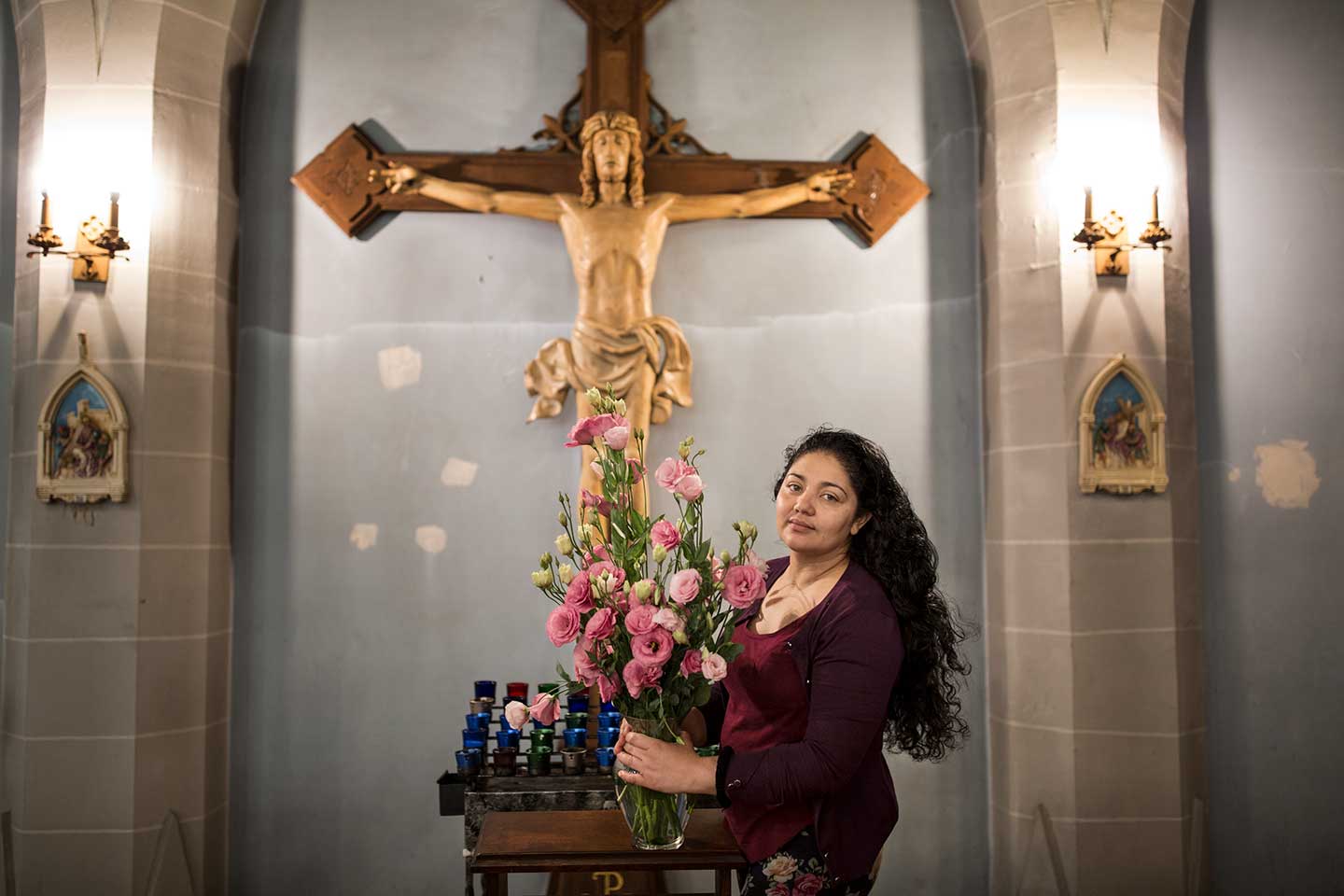 When immigration agents told Amanda that she would not be allowed to stay in the country, she had a full life here: a job, a home, a husband. Her children were growing up safe and happy. Back in Guatemala, one of her cousins had just been murdered. “I had two weeks to decide what I was going to do,” she says. (Cinthya Santos Briones) 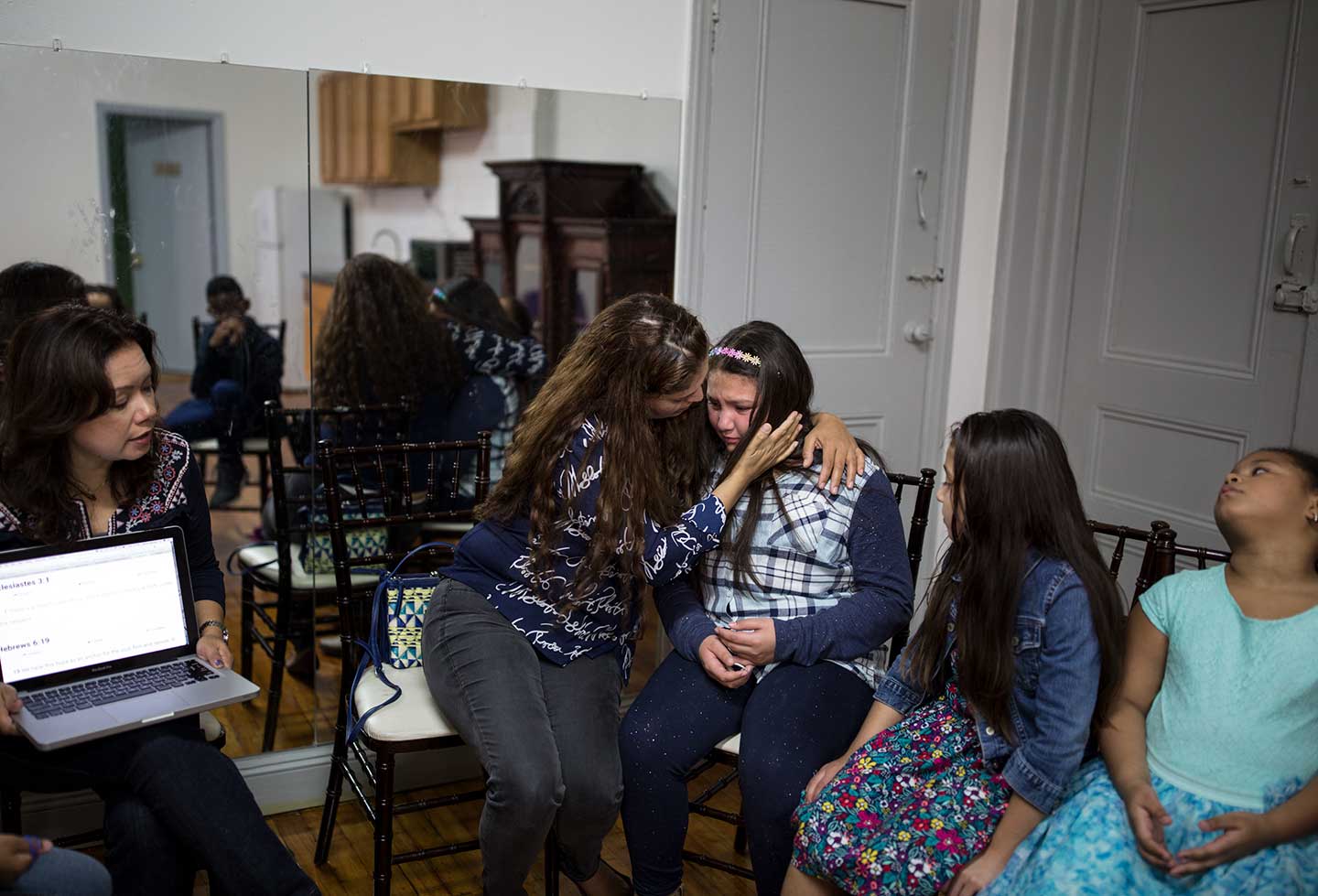 Dulce, Amanda’s oldest child, “cried and cried” their first night in the church, she says. She still misses her home on Long Island and her father, who had to stay behind to keep his job. (Cinthya Santos Briones) 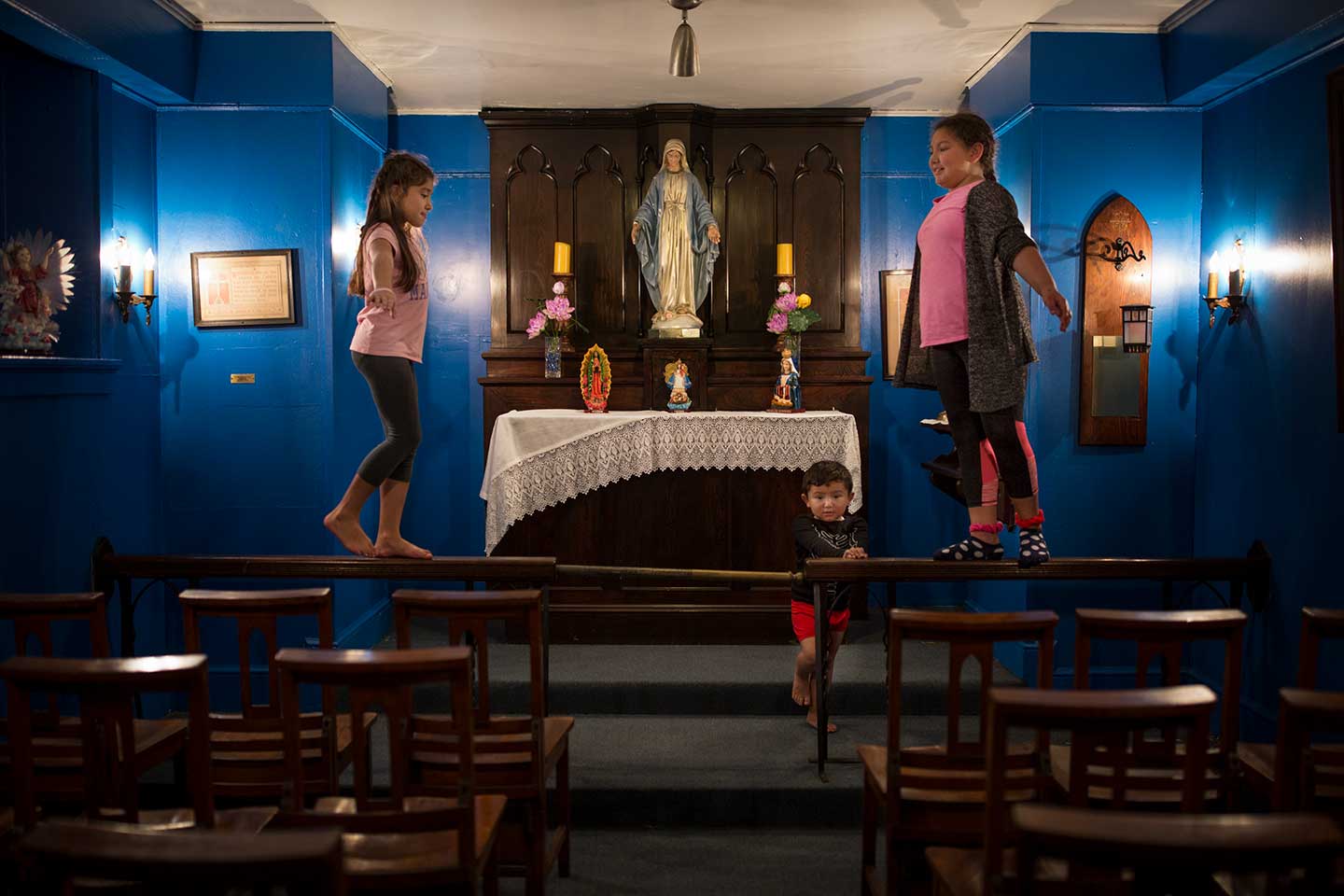 Daniela and Dulce balance on the sanctuary rail inside the chapel of Holyrood Church. (Cinthya Santos Briones) 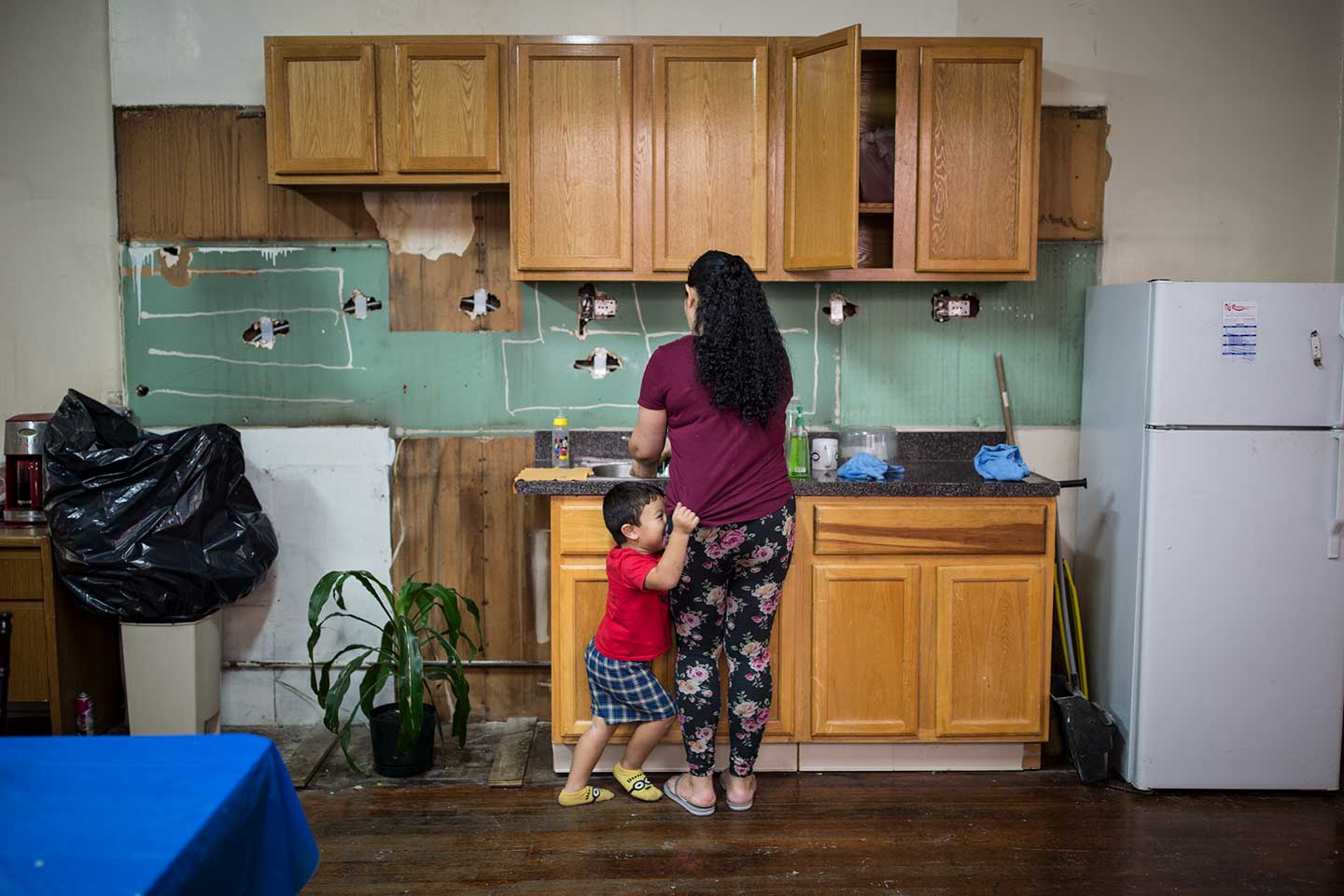 Since August, David has grown increasingly clingy, forever grasping at Amanda’s legs or demanding to be cradled. “He spends all day with me. He never peels himself away.” (Cinthya Santos Briones) 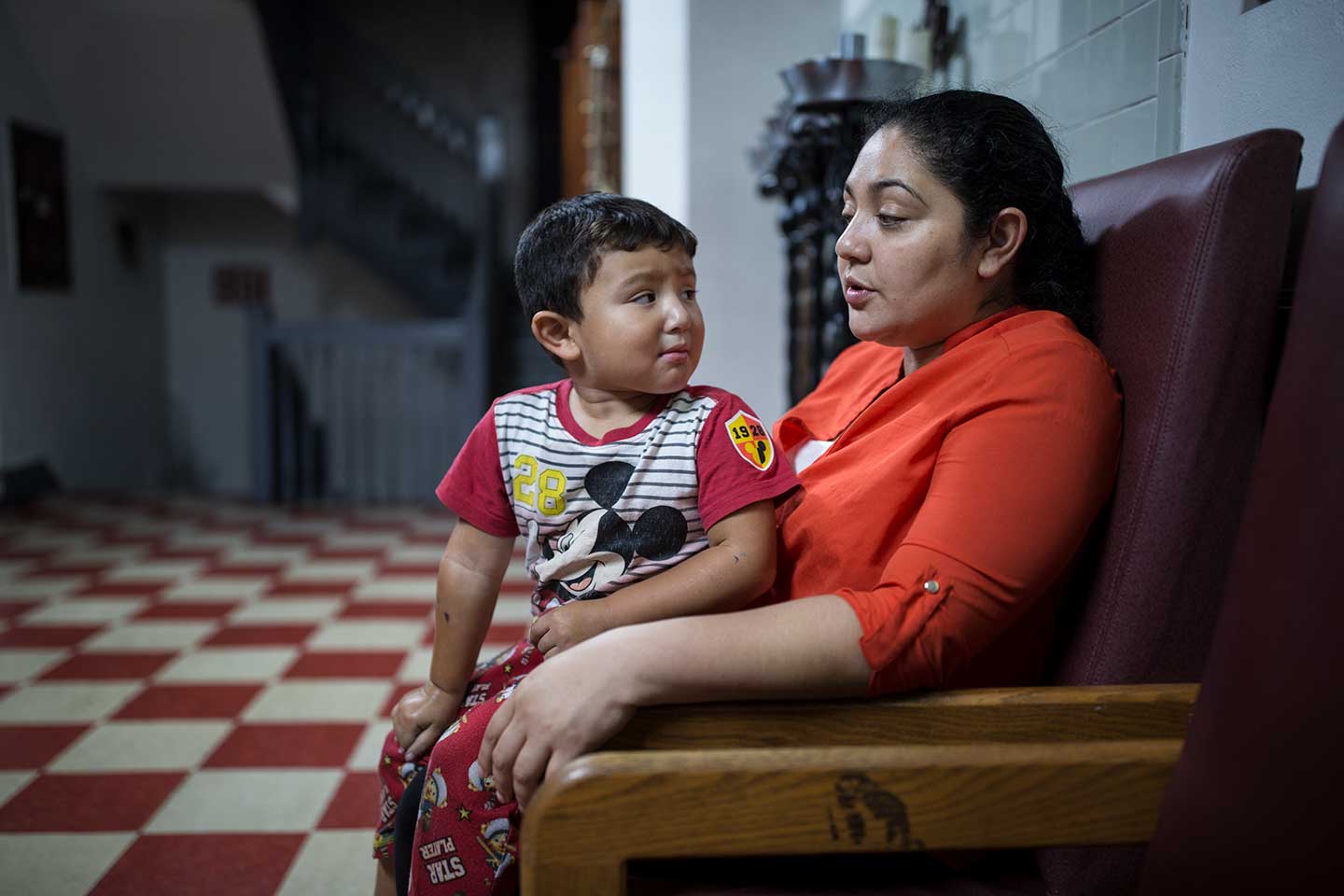 “There are times when me and my son are here alone in the church…and I walk out into the hallway and I see the loneliness there, and inside me. And my son asks me, ‘What’s wrong, Mommy?’ I tell him, ‘Nothing.’ ” (Cinthya Santos Briones) 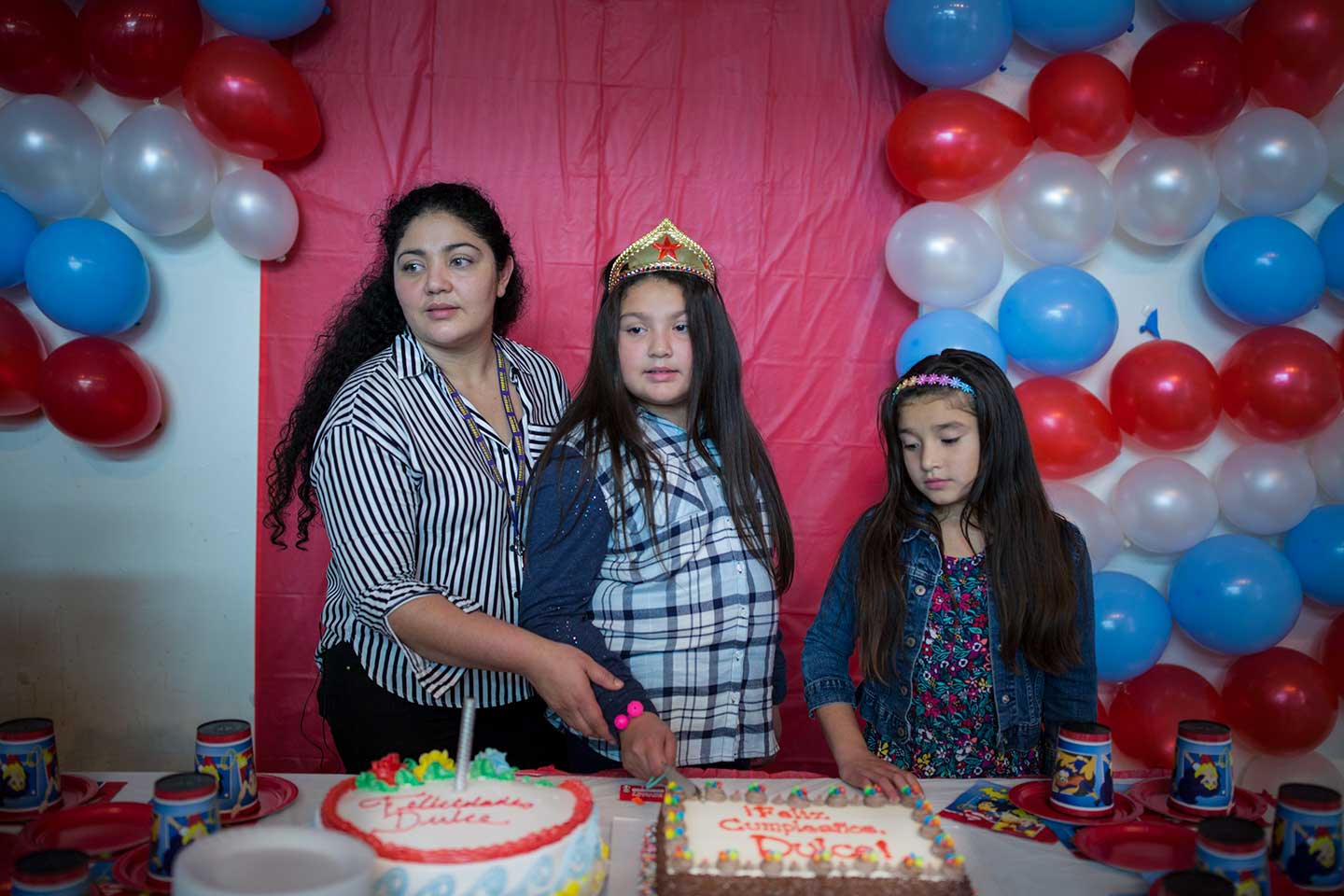 Amanda throws a surprise party for Dulce’s 10th birthday. It’s the first of three birthdays the family celebrated in the church; the others were Amanda’s 34th and David’s third. Daniela will not turn 9 until this summer, but she already knows what she wants her present to be: home. (Cinthya Santos Briones) 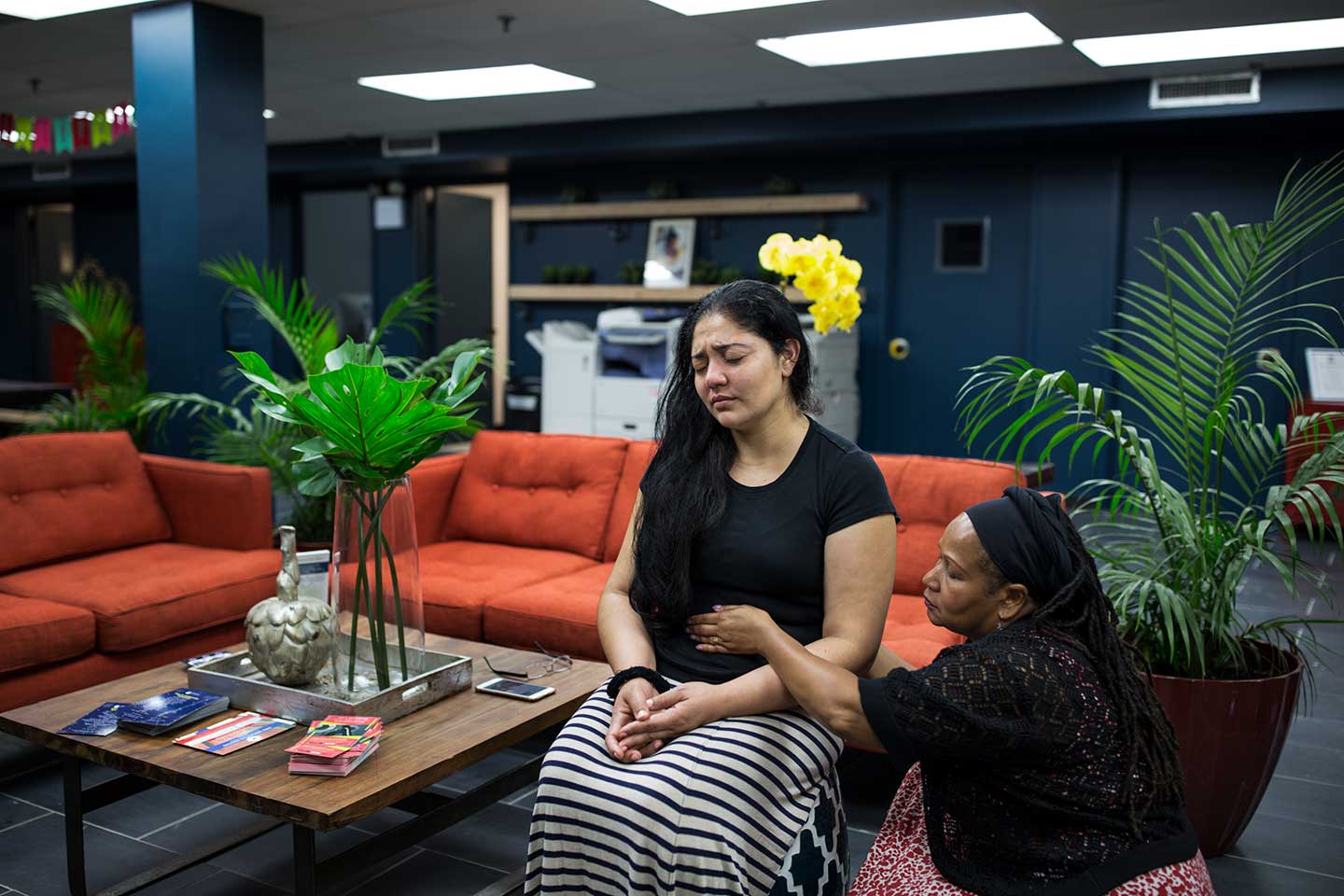 As the weeks have become months, Amanda’s despair is visceral: “Every day I say to myself, ‘When am I going to leave?’ Last night was a very difficult night. I felt like dawn would never come…. I felt like I couldn’t even breathe. I felt so alone, and so sad.” (Cinthya Santos Briones) 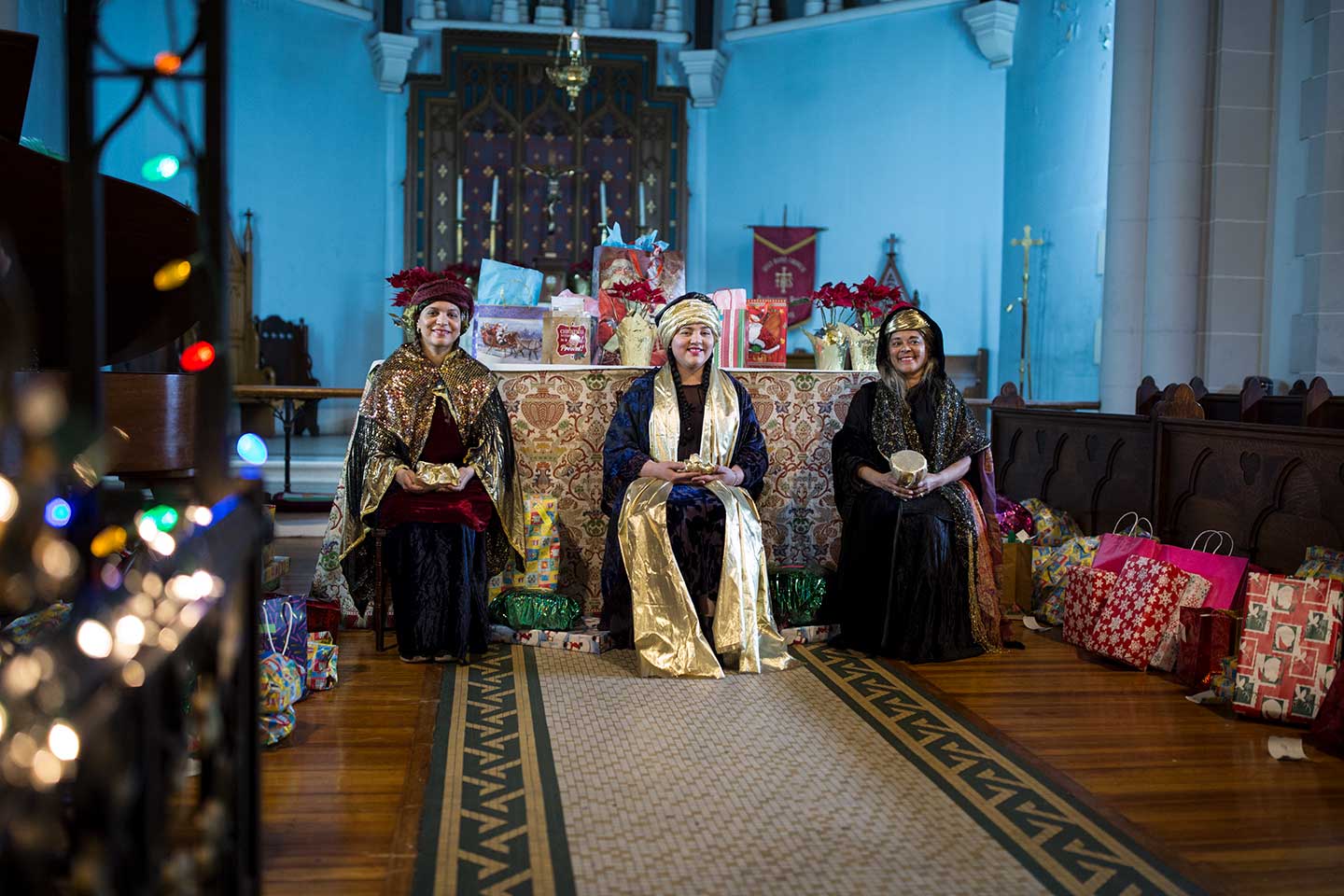 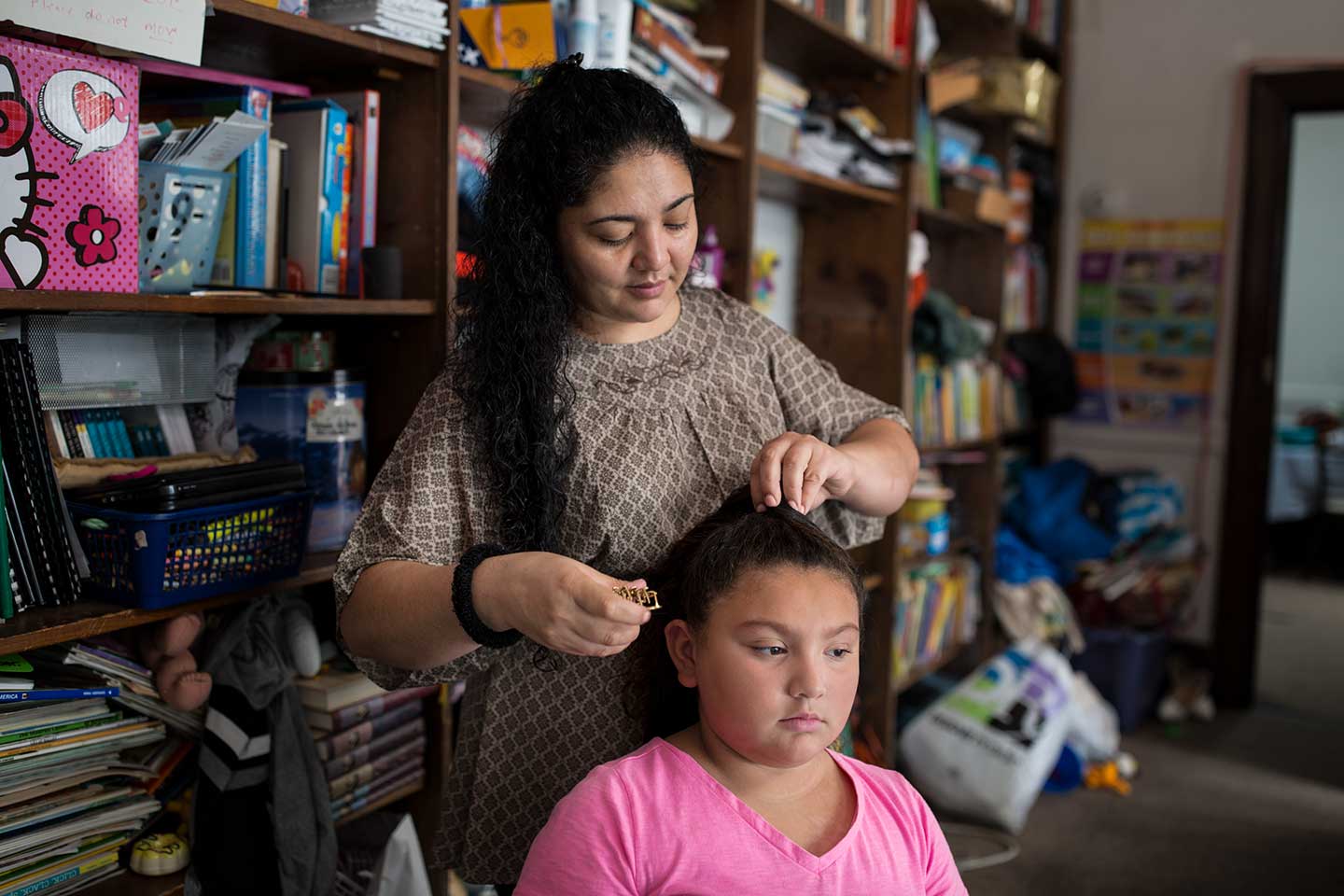 Dulce dreams that her mother’s case will be resolved, that she will “get the papers for the United States” so that the family can return home. (Cinthya Santos Briones) 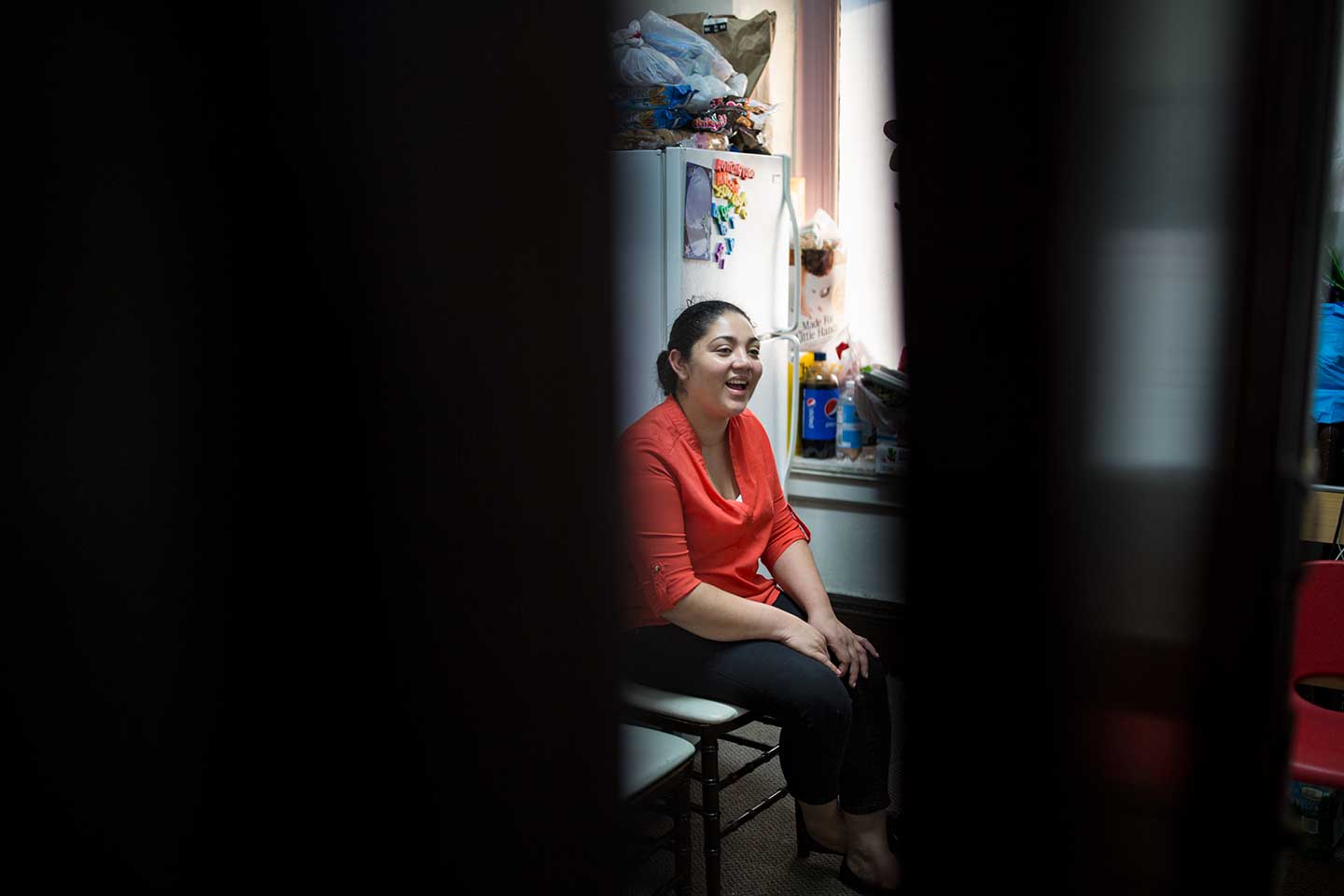 Since August, Amanda has left the church only a handful of times: once for an emergency root canal, another time to feel the winter’s first snowfall. “I was here for part of the summer, the fall, the winter, and now spring is coming,” she says. “Soon summer will come again, and I don’t want to be here imprisoned.” (Cinthya Santos Briones)

Read all of the episodes in the Finding Sanctuary series.