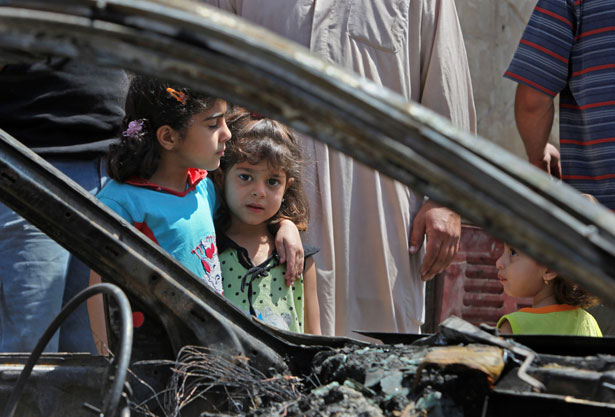 Zahra Naaim, 4, center, and Balqes Youssif, 6, left, stand next to a destroyed vehicle in the Shiite stronghold of Sadr City in Baghdad, Iraq. (AP Photo/Karim Kadim)

The crisis now engulfing Iraq provides the ultimate condemnation of the decision by George W. Bush, Dick Cheney and their cohorts—backed, of course, by Hillary Clinton and John Kerry—to invade Iraq in 2003. That action, which destroyed virtually all of Iraq’s institutions and created a power vacuum that led directly to an ethnic and sectarian civil war, is now playing out all of its terrible consequences.

Yesterday, in a surprise military action, fighters from the Al Qaeda–linked Islamic State of Iraq and Syria (ISIS) seized what appears to be virtual control of Nineveh province and Mosul, Iraq’s third-largest city. The insurgents, working in close coordination with Islamist forces in Syria fighting the government of President Bashar al-Assad, seized the governor’s office in Mosul, the airport, the television station and other key locations, and invaded prisons, freeing large numbers of prisoners. According to numerous reports, the Iraqi army and police suffered a huge defeat, melting away and fleeing en masse, leaving their weapons behind. The governor, a leading Sunni politician whose brother is speaker of the Iraqi parliament, managed to escape.

It’s a catastrophic development for Iraq, and it puts murderous terrorists in control of an enormous part of Iraq’s north and west. Already, ISIS and its allies have occupied and controlled the city of Falluja, a key urban center in Anbar province, and have launched deadly attacks across Iraq, even in the east and south. Earlier this week, ISIS militants stormed into the city of Samarra, the city in which the sectarian war in Iraq started in earnest in 2006 when Sunni extremist insurgents bombed an ancient Shiite mosque, and were repelled in heavy fighting. And in Ramadi, the capital of Anbar, which almost fell to insurgents earlier this year, this week ISIS militants attacked a leading university and held students hostage.

Though not quite reaching Syria’s level of carnage, the toll in Iraq is staggering, with more than 8,000 killed in 2013 and monthly totals that suggest an even higher number of deaths this year; in May, 799 Iraqis died as the result of suicide bombings, car bombs, targeted assassinations, tit-for-tat killings and other civil war–like violence, according to the United Nations—and that data doesn’t even include Anbar province.

Much of the blame for the chaos lies with Prime Minister Nouri al-Maliki, who emerged from the April 30 elections in a strong position to claim another term as Iraq’s strongman leader. Since taking office with American support during the occupation, Maliki has ruled as an iron-fisted sectarian Shiite, rallying Shiite support to his side by shutting out Sunnis from power and persecuting leading Sunni politicians who dared challenge him. (For a detailed, and chilling, account of Maliki’s rise to power and his imperious rule, take a look at Dexter Filkins’s New Yorker piece from last April.) Maliki, of course, rose to power with support from the United States and Iran, though each country had different objectives.

Based on scattered reports in The New York Times recently, here are some headlines from the ongoing war in Iraq: on June 10, at least forty people died in attacks in Kurdistan in Iraq’s north; on June 6, twenty-seven died and dozens were wounded in attacks around Mosul; on June 2, at least fifteen died in bombings across Iraq; on May 22, thirty-five Shiite pilgrims were killed. Such reports are only the tip of the iceberg, and even the reports from the United Nations—according to which 2,879 Iraqi civilians have died in 2014—no doubt seriously underestimate the number of deaths.

Human Rights Watch, in a piece titled, “In Iraq, Murder is the Norm,” says:

Almost every day in Iraq, terrorist attacks kill civilians. Suicide and car bombs explode in markets, at rallies, and at marches of Shia pilgrims. These attacks are so extreme they have probably reached the level of crimes against humanity. But the government’s response is no better. Shia militias with apparent ties to the government execute suspected terrorists and those they accuse of supporting them. Militias and government forces have terrorized Sunni villages around Baghdad. Abusive government forces do not try to hide their crimes. On the contrary, they publicize them proudly. Elite military units post videos online of the prisoners they execute.

And HRW gives this horrifying example of the crimes being committed:

This week General Abdelamir al-Zeidi, commander of military operations in Diyala province and the city of Kirkuk, posted a photo of a “terrorist” on his official Facebook page and invited readers to vote: (1) Are you in favor of investigating him and letting the judicial system oversee the process going forward or, (2) Should we immediately execute this criminal, who was caught red-handed? This commander should be fired immediately, and prosecuted too. But in today’s Iraq, where impunity reigns, he’ll more likely be praised, and possibly promoted.

A new report from Anthony Cordesman at the Center for Strategic and International Studies lays out some basic facts:

The World Bank ranks Iraq as having extremely low quality of governance: It ranks 178th in the world in accountability, 201st in political stability and violence. 182nd in government effectiveness, 205th in the quality of rule of law, 189th in the quality of government regulation, and 193rd in the control of corruption.… Iraq ranks 131st on the UN Human Development Index. In comparison, the UAE ranks 41st, and Saudi Arabia ranks 57th.… In spite of its high oil revenues, its per capita income ($1,000) only ranks 141st in the world, by far the lowest of any Gulf state.