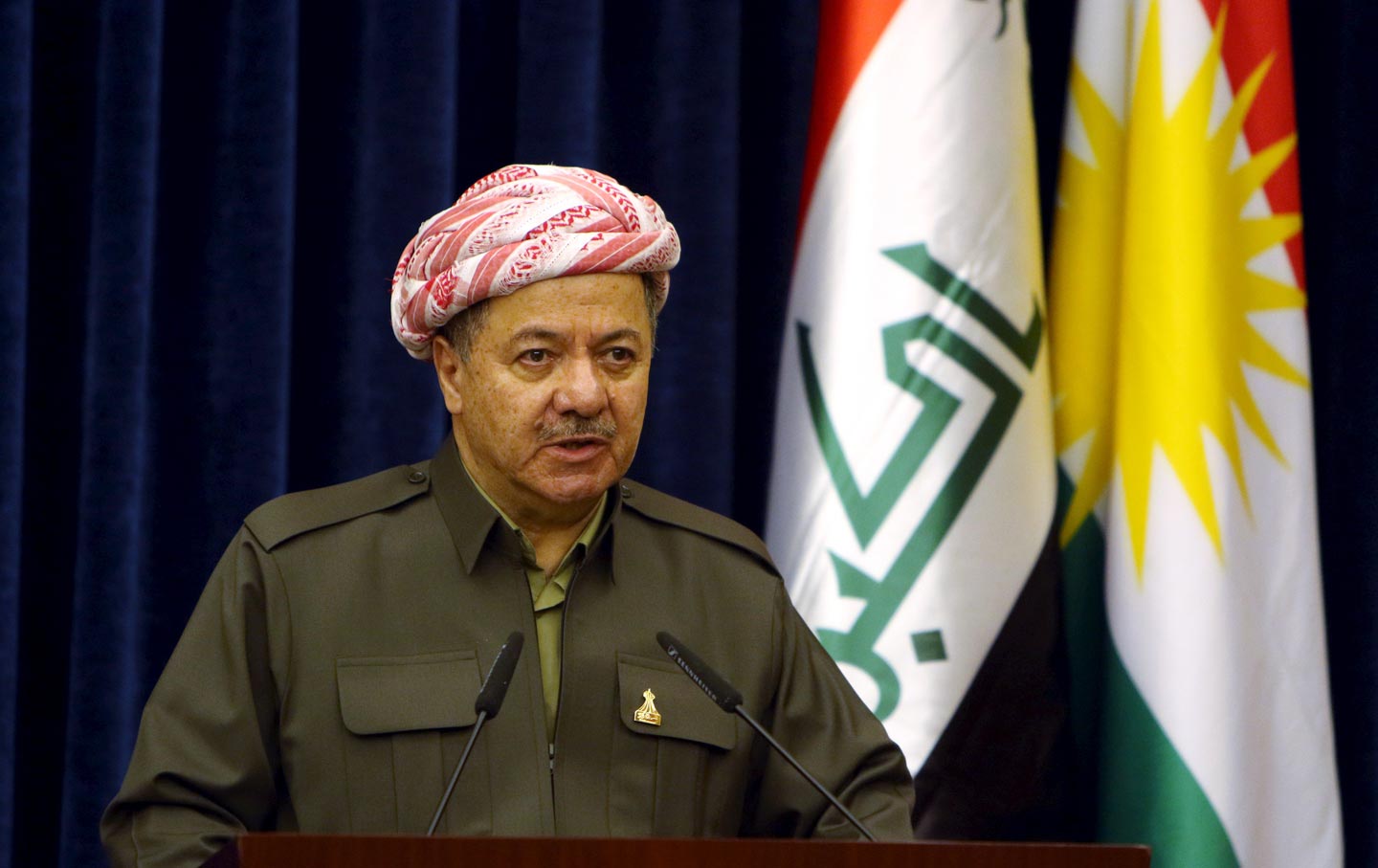 Suheil, Iraq—A century after Britain and France drew their famous line in the sand, dividing the Middle East into zones of influence, the leader of one of the region’s few oases of stability, Iraqi Kurdistan, says it’s time to replace artificial with “natural” borders according to national identity.

But change should come through peaceful means such as referendum, following “dialogue” with existing governments, said Massoud Barzani, the 69-year-old president of the Kurdistan Regional Government. That applies to Iraqi Kurdistan, where independence is a national cause but faces adamant opposition from the government in Baghdad and the dominant outside power in the region, Iran.

“This Sykes-Picot agreement may have been good at the time. But it’s clear that it was a mistake, the mistake of the century,” Barzani told The Nation. “The borders were drawn by hand in the name of the great powers. But in practice, these borders no longer exist today. It’s time that others recognize that, and accept this reality.”

How the War With ISIS Has Exposed Kurdistan’s Internal Divisions

The carve-up of the Levant took place during World War I. Mark Sykes, a British politician, sketched the line on the map from the “E” of Acre, in what is now Israel, to the third “K” in Kirkuk, in Iraq, at a meeting with British cabinet ministers in December 1915, and French diplomat François Georges-Picot agreed to it the following month. In a May 1916 exchange of letters, France asserted the right to dominate what is now Syria after the defeat of the Ottoman Empire, and Britain asserted the right to do so over what was to become southern Iraq, parts of northern Iraq, Israel, the Palestinian territories, and Jordan.

“Every people should have its natural borders. Borders drawn by force should no longer apply.” —Barzani

“Every people should have its natural borders,” Barzani said. “Borders drawn by force should no longer apply.”

Calling for referenda as the mechanism for change, he said: “One should ask the peoples: Do you want to live together? Do you want to separate, and draw the borders accordingly? No solution should be forced. In my view every change, every new solution, shall come about through a referendum.”

“People cannot be forced together. No matter how long one tries, it will fail in the end,” he said.

Barzani spoke from inside a prefab building at a military base in the north of the Kurdistan region, his modest forward headquarters close to the Turkish and Syrian borders. From here he directs the Kurdish peshmerga, perhaps the most effective ground force in the 60-plus-nation battle against Islamic State extremists.

The oil-rich Kurdistan region, which operated under semi-independence after the US invasion of Iraq, is still embroiled in bitter dispute with an ever more dysfunctional central government in Baghdad. At issue are the governance of Iraq, major deficiencies in financial and arms support for the peshmerga, and still-missing payments for the sale of oil, not to mention the future of disputed areas along the border between the Kurdish-ruled and predominantly Arab areas.

Moreover, Iraqi Kurdistan is surrounded by turmoil. To the west and northwest is Syria, now in a devastating internal war five years after a national uprising; to the north, the Kurdistan Workers’ Party, or PKK, is engaged in a costly new guerrilla war against Turkey; and to the west and south is Arab Iraq, whose forces are slowly recovering territory seized by the Islamic State in 2014, with US, Iranian, and other international help.

Yet to all appearances, the Kurdistan region’s economy continues to develop rapidly, with an abundance of construction sites in cities and towns and signs of new small-businesses opening.

In the 45-minute interview, Barzani said the peshmerga are ready to take part in the battle to liberate Mosul from the Islamic State but are waiting for the Iraqi government and the United States to come up with a military plan as well as a plan for security and governance for “the day after” in Iraq’s third-biggest city.

American military spokesman Col. Steve Warren confirmed that the Iraqi government is working on both plans but offered no predictions on the timing for the assault.

Barzani asserted that with better and more modern military equipment, Kurdish forces could have eliminated the Islamic State long ago, a point that some outside military observers challenge. Meanwhile, his long-running dispute with the PKK, which has its headquarters in the Qandil Mountains of Iraqi Kurdistan, appears to be getting worse. For more than a month, the regional government has blocked access to “Rojava,” the self-styled “west Kurdistan” region of northern Syria that is ruled by the PKK’s Syrian branch, the Kurdish Democratic Union Party, or PYD.

If Barzani’s advice on revising borders is followed, the implications for the region would be vast. Kurds, a sizable minority in Turkey, Iran, and Syria as well as Iraq, would no doubt press for referenda on their future, but so would myriad other ethnic and national minorities.

Barzani has called for Kurdish independence from Iraq since the Islamic State insurgents destroyed much of the Iraqi army in 2014, but he gave no sign of following through any time soon. And he was careful to restrict the option to Iraq, pointedly excluding the Kurds of Turkey, Iran, and Syria.

Referring to a future Kurdish state, he took an indirect swipe at the PKK. “We’re speaking about Iraqi Kurdistan,” he said. “In Iraqi Kurdistan, the time is ripe. Our goal will come into being of course through dialogue, not through war and violence.”

As for a single Kurdish state, “of course if the opportunity presents itself, we would welcome it if 40 to 50 million Kurds had their own state. But we must keep the reality before our eyes and understand. We are in four parts. Each has its own circumstances, its own situation, and each must find a solution with each central government.”

But when asked if an independence referendum would take place this year, he was noncommittal. “Inshallah” (God willing), he said.

Barzani’s criticism of the PKK was unreserved.

Barzani said the PKK had acted “very arrogantly” in Turkey after the June 2015 elections.

He said the PKK had acted “very arrogantly” in Turkey after the mostly pro-Kurdish People’s Democratic Party (HDP) gained 13 percent of the national vote during elections in June 2015 and entered the Turkish Parliament as a party for the first time. Barzani said he’d urged the HDP to try to enter a coalition with President Recep Tayyip Erdogan’s Justice and Development Party (AKP), but the HDP was “infected” by the PKK.

“This arrogance led to a further separation. It led to conflicts, finally to a resumption of the war,” he said.

Barzani praised Erdogan for acknowledging in 2013 that Turkey had suppressed its Kurds and pledging to address the Kurdish problem. “That was a complete change in Turkish policy, which had been totally chauvinistic previously,” he said. He was careful to avoid blaming Erdogan for the reversion to war.

“I don’t know at what point Erdogan lost hope. In any case, he isn’t the same as before.”

Barzani said that the PKK’s offshoot in Syria, the PYD, is allied with the Assad regime, and he charged both with responsibility for mass expulsions of Arabs and for repression of other Kurdish parties. He said at least 20 political activists from the party allied with Barzani’s Kurdistan Democratic Party had been “disappeared or killed.”

The confrontation with the PKK and PYD extends to the Sinjar region of Iraq as well, where the Yazidi minority—ethnic Kurds who practice a heterodox religion—came under attack by the Islamic State in August 2014. Thousands died in the assault, and thousands of women were abducted, raped, and kept as sex slaves in what the United States has declared to be a genocide. The attack surprised peshmerga forces stationed there, and after they fled the scene, the PKK sent in troops to guide Yazidis to safety in Syria, Kurdistan, and Turkey.

Now the PKK is refusing to leave. Barzani said they are being supported by the Iraqi state intelligence service, which is widely thought to operate under the influence of Iran. This was not the only reason for the blockade, he said. Referring to the PKK, he said, “They control everything [in northern Syria]. They don’t allow Kurds to join the uprising [against the Assad regime]. They steal, they stick people in prison.”

“We have said if we are partners only in name, we will not go along. We’ve had enough.”