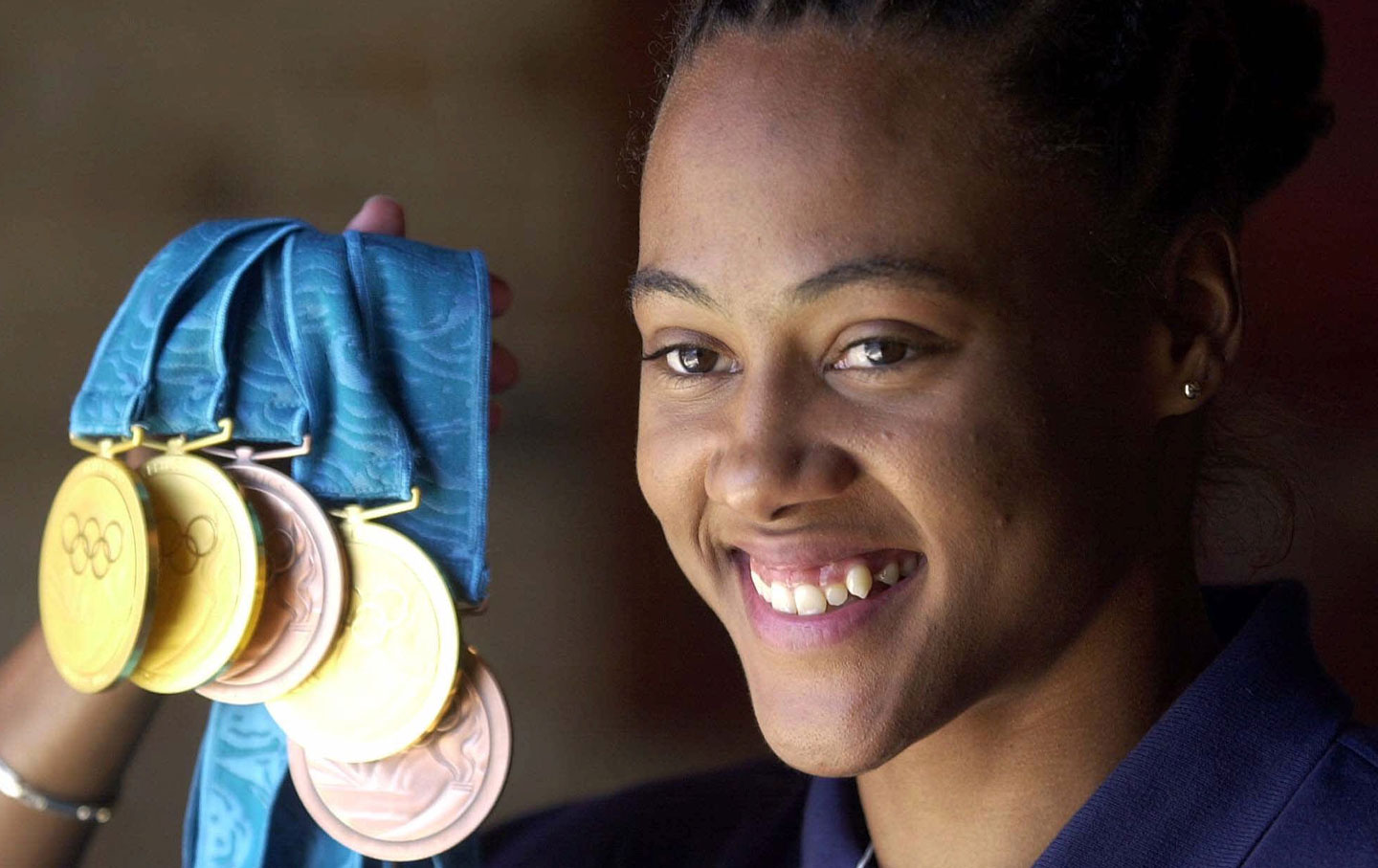 This has been an unprecedented era for black women in the history of women’s sports. Serena, Venus, Mo’ne Davis, Sasha Banks, Michelle Roberts, and the gutsy Maya Moore have changed the game and opened space to speak about the groundbreakers and trailblazers who built the path upon which they strut. Yet as is so often the case with mainstream sports coverage, there has been a measure of erasure of those who don’t fit this seamless narrative of progress and triumph. Verisimilitude is always the first casualty of sports history when refracted through a mainstream lens. Without it, we find ourselves thinking that every battle must be fought anew, re-explaining to troglodytic corporate execs that Serena absolutely deserves the same commercial opportunities of a certain player who Ms. Williams humbles nine out of ten times they take the court.

This is why we would do well to remember the genius and wicked daring of Olympic Track & Field leviathan Marion Jones.

The tragedy of Marion Jones is well known. After her now ex-husband, the colossal Olympic shot-putter and prodigious steroid user C. J. Hunter, testified against her, she went to prison in 2008 for lying to IRS Special Agent Jeff Novitzky about taking performance-enhancing drugs under the furtive eye of BALCO impresario Victor Conte. (Novitzky was accused by federal judges of having a “callous disregard” for the Constitution while in pursuit of Barry Bonds, and, without a warrant, stole Conte’s trash to sift through in his kitchen.)

The United States Olympic Committee head Peter Ueberroth, whose organization profited mightily by marketing Jones as the face of the sport, said that her confession was “long overdue and underscores the shame and dishonor that are inherent with cheating.”

IAAF president Lamine Diack piled on, saying, “Marion Jones will be remembered as one of the biggest frauds in sporting history.”

Part of her plea deal, in addition to returning her medals, was to publicly flagellate herself. She said, through tears: “with a great amount of shame…I stand before you and tell you that I have betrayed your trust…and you have the right to be angry with me.… I have let my country down and I have let myself down.”

Shackles of shame not only keep Marion Jones out of discussions of the all-time great athletes but also prevent a younger generation from knowing that Serena is only latest chapter in a long history of black women who defied expectations, smacked down the racist marketers of Madison Avenue and showed what was possible. It also prevents that new generation from learning from her mistakes.

For the uninitiated, Marion Jones was Deion Sanders, if Deion Sanders looked like Michael Ealy. Athletically, she was a star at 17, winning the California 100 meter state title for four straight years. She was asked to join the 1992 US Olympic team at age 17, but turned it down for a basketball scholarship at The University of North Carolina. Jones was the freshman point guard on the UNC team that won the 1994 National Championship 60-59 on Charlotte Smith’s three pointer at the buzzer. She was a two-sport star, with Olympic Gold medals in her future.

Her physical beauty was an asset she was told that she would be a fool not to use. After Florence Griffith-Joyner (whose time in the spotlight was limited), Marion Jones was the first black female athlete to truly cross over commercially, turning a track and field career into a multimillion-dollar empire. In 2000, after winning three golds and two bronze medals in Sydney, Jones was at the apex of her sport and commercial appeal, finding herself on the cover of Sports Illustrated and Vogue. As Ron Rapoport wrote in the Los Angeles Times, Jones “was all but inescapable as the symbol of the possibilities, and the joy, that could flow from a life devoted to sport.”

Jones may have been a symbol of this, but it was not her reality. She had fame. She had fortune. What she did not have was control. That was exercised by the men in her life: the intimidating C. J. Hunter, the imperious Peter Uebberoth, the greasy Victor Conte, and soon her next husband and father of her child, Olympian and “world’s fastest man” Tim Montgomery. Jones became less of a human being than a corporation with legs: Nike owned her feet, Oakley Sunglasses colonized her hypnotic eyes, and even her time was brought to her by the good people at TAG Heuer watches.

Yet while her success inspired legions of fans, friends, and a line of corporate partners, her fall from grace was one she had to endure alone. It was not a burden Phil Knight was going to help her carry and she would be doing time without the benefit of TAG Heuer to help her mark the hours.

Marion Jones later started a program called “Take a Break” aimed at encouraging young people to “think about the potentially life-altering consequences of the decisions you make. Seek advice and counsel from people you trust and love (friend, parents, teachers, mentors). Then make a rational, informed and thoughtful decision.” There is nothing on the website that notes any actions taken by Ms. Jones since 2010.

This message for the kids seems like fine advice. But as we continue forward with this Summer of Serena, it is worth reflecting on other lessons for all of us to remember that are obvious from the experience of Marion Jones: First, black women did not just magically become dazzling, charismatic athletes in 2015. Marion Jones held the world in her hand and that should never be forgotten. Second, never, ever, listen to some Forbes article explaining in not such coded language, about why black women cannot be the face of an industry or product. It is garbage. If Flo-Jo didn’t prove it, Marion Jones should have put that idea to bed 15 years ago. And lastly, watch your own damn money and watch what you put in your body because if they could tear down Marion Jones and not lose a night’s sleep, all are vulnerable to a sports world that is devoted to the ethos where–with apologies to the Dark Knight–you can either die a hero or live long enough to become a villain. To remember Marion Jones at her best is an act of resistance: resistance against a sports world devoted to forgetting all that she conquered, and erasing all of her magic.