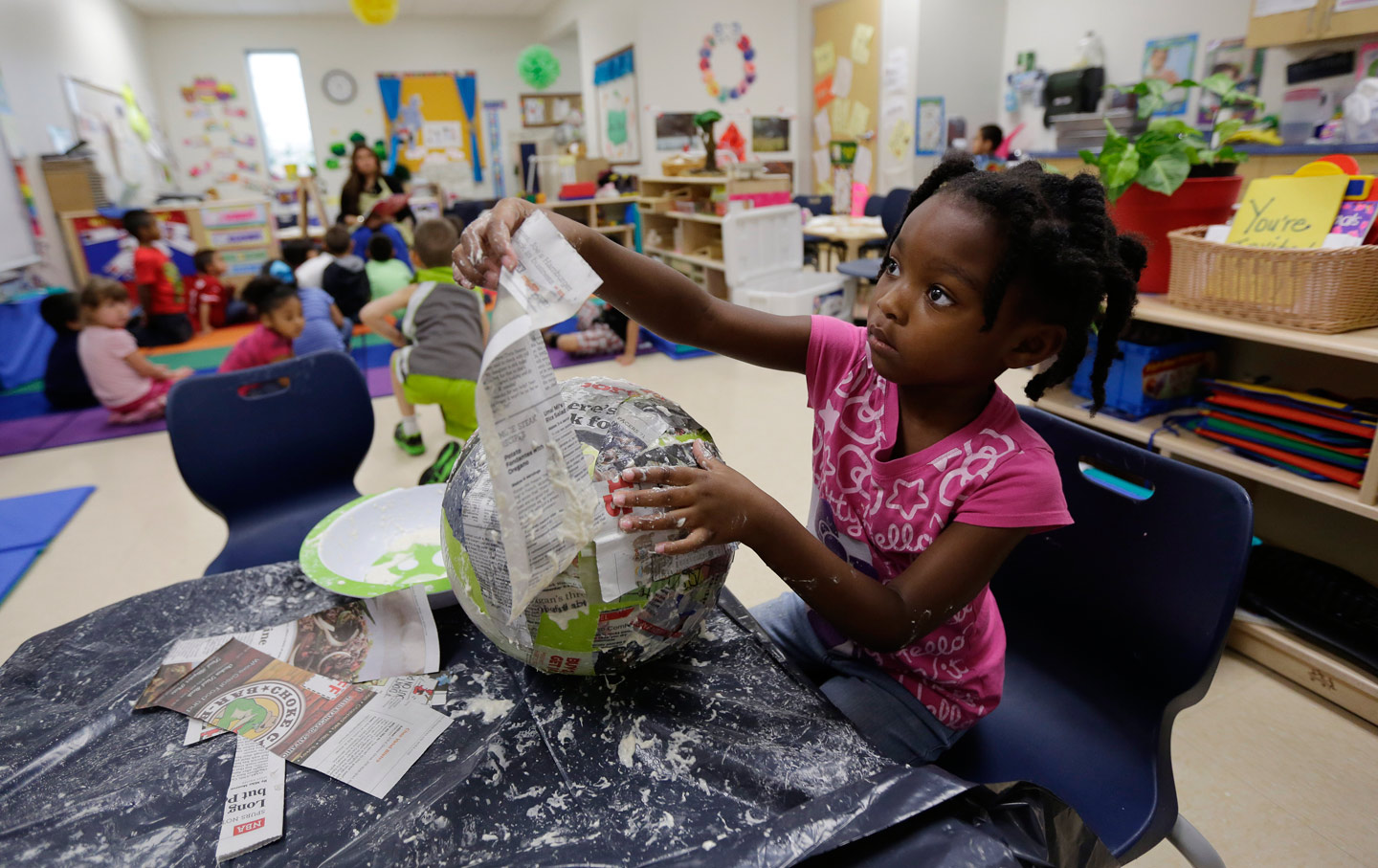 When people talk about “balancing work and family,” they’re usually talking more about the workplace than what’s going on at home. Now we’re starting to get data on what the workaday life looks like from a kid’s eye view, and it doesn’t look good.

When debating the issue of work-life balance, arguments over unlimited vacation and employment discrimination center around women’s barriers to opportunity—the perennial glass ceiling that Anne Marie Slaughter and Sheryl Sandberg rage at when lamenting not “having it all.” For working-class folks crushed by on-call schedules or poverty wages, it’s often hard to find any life outside work, let alone to balance work and family lives. But centering the conversation not on career ambition but the life course of a family helps put the false dichotomy of work vs. life in perspective.

For working-class folks crushed by on-call schedules or poverty wages, it’s often hard to find any life outside work.

In their new book “Too Many Children Left Behind,” Bruce Bradbury, Miles Corak, Jane Waldfogel, and Elizabeth Washbrook help illuminate these gaps by comparing the impacts of inequality across four wealthy countries—the United States, Australia, Canada, and the United Kingdom. They found that poor children in the US are “doubly disadvantaged relative to their peers in the other three countries” because the government’s “social safety net and supports for working families do the least among the four countries to combat inequality”—particularly our national lack of guaranteed paid time off and vacation.

That’s old news, but the center of the researchers’ narrative is not necessarily workers’ lives but their children’s. Poverty limits access to basic resources like nutrition and decent childcare. But a geometrically expanding class divide looms over all income brackets, as wealthier parents zealously splurge on “enrichment expenditures”:

spending on books, computers, high-quality child care, summer camps, private schooling, and other resources that offer a motivating and nurturing environment for children. A generation or more ago, during the early 1970s, a typical family in the top fifth of the income distribution spent about $3,850 per year on resources like these, four times as much as the typical family at the bottom of the income distribution, which spent about $925…. by 2005 it had grown tremendously, to $9,800 versus $1,400.

So poor parents struggling just to cover basic food and shelter face both massive income inequality in their day-to-day lives, plus a seven-fold gap in the amount they can “invest” to help their children thrive in the future. Given that social mobility is already suppressed at all income levels—with children’s future earnings highly correlated with the earnings of their parents—the Herculean amount of “catch up” poor parents must undertake just to get on the same footing as their higher-earning peers makes the great American wealth gap seem even more devastating, for both today’s working households and generations to come.

Moreover, the gender gap straddles the class divide: the “earnings advantage” provided by parents’ wealth, or lack thereof, is skewed against women. A son is likely to inherit a greater share of his parents’ wealth than a daughter. Beyond the perennial “equal pay” debate and the simplistic notion of “78 cents on the dollar,” how does that reality of gender inequality play out in family dynamics, in those difficult late-night conversations on who should stay home with a newborn, or stay late at the office?

But the most enduring impact of these deficits may be impossible to quantify. Economic disadvantage intertwined with structural inequality has a savage effect on a child’s long-term educational prospects—including basic preschool-level skills, like language aptitude and sociability, and failing primary-school grades. And the “achievement gap” (which is itself a notion often politicized with complex racial biases) has folded into a deepening black-white education divide over the last three decades.

Other research has revealed that economic status is a growing factor in academic outcomes, as “the relationship between income and achievement has grown sharply” over the last 50 years. So wealth trumps intellect on many levels.

Closing the gap takes more systemic solutions than just “leaning in.” Class lines reflect a deficit of democracy, created by neglect of government institutions. Research suggests much of the education gap is perpetuated or aggravated while children are wending through the highly segregated school system.

Universal preschool for 3- and 4-year-olds would help level the playing field by ensuring that all preschoolers receive educationally oriented early education (rather than the case now, where more affluent families can buy preschool, while lower income families have to make do with lower quality care).

Federal programs like Head Start and childcare subsidies have for years suffered massive funding gaps, leaving tens of thousands of kids underserved. But some states are directing resources into expanding preschool—with pioneering programs in New York City—though it remains to be seen whether lawmakers who have failed to adequately fund K-12 are really willing to invest enough public dollars in the long-term to create a sustainable universal pre-K system.

Waldfogel’s research reveals a need for not just income supports but simply less need to work all the time. For young children of parents who are either out working around the clock, or constantly stressed at home, overwork translates into a materially and emotionally impoverished home environment. During the developmental years, research shows “inequalities in income and family resources are in turn linked with disparities in more proximal factors such as books in the home, lessons and activities outside the home, and parents’ spanking.”

Although many factors shape a household’s social climate, the connection between a parents’ economic frustrations and a pattern of a lack of nurture, even cruelty at home, suggests a troubling through-line in this inheritance of inequity: Wealth doesn’t trickle down, yet economic violence does.

When a wealthy parent’s gain is a poor parent’s pain, a sense of injustice can breed bitterness, but the crisis doubly wounds the child who abruptly realizes that mom can’t give him what he’s starved for—whether it’s food or attention—and can’t understand why he can’t possibly have it all.