The sun sets in the Darien province on the border with Colombia, in Union Choco, Panama. (AP Photo / Arnulfo Franco)

In late May, a group of 20 refugees entered the Darien Gap, a 66-mile lapse in the Pan-American Highway, which otherwise stretches unbroken from Argentina to Alaska. The gap occurs between Colombia and Panama, where the rugged jungle, dangerous wildlife, paramilitary groups, and crime syndicates threaten all who enter.

One of the refugees, Valentin, emerged on the Panamanian side of the gap—alone—after nine days in the jungle. During the first night, the group had been abandoned by the guides they paid to help them cross. Forging on, they were ambushed by thieves, who robbed them and raped some of the women. When four of the group tried to fight back or run away, they were gunned down—but still, the survivors kept heading north. Unable to keep pace, Valentin was left behind on the sixth day. He spent three nights alone in the jungle before finally emerging in Panama.

“I was dead and then alive,” says Valentin. “That’s how it felt passing through the Colombia-Panama forest.”

Valentin (out of fear for his safety, he declined to give his full name) was forced to leave his native Cameroon in January because of the ongoing conflict between the country’s Francophones, who dominate the government, and its Anglophones, who are seeking their own state. The 26-year-old petroleum engineer by training is an Anglophone who formerly worked with the Francophone government, and therefore became caught in the cross fire: kidnapped by separatists for two weeks, then released only to be imprisoned by the military for three days. After being freed, he feared for his safety and that of his family, so chose to leave Cameroon for an unlikely destination: Ecuador.

“Cameroonians can legally enter Ecuador due to a visa-free agreement implemented in 2008,” explains Brooke Kipling, a researcher with Humanizing Deportation. “This agreement between Cameroon and Ecuador gives thousands of Cameroonian refugees a legal entryway into Latin America. They fly from either Cameroon or Nigeria to Ecuador to begin the perilous journey to the Mexico-US border.”

According to a 2019 report from the think tank Inter-American Dialogue, citizens of Eritrea, Senegal, Ghana, Gambia, and Cameroon ranked among the top 10 nationalities immigrating to Ecuador from 2010 to 2017. While it’s unclear how many continued traveling north to the United States, a 2017 report from the Department of Homeland Security depicts a dramatic rise in the apprehension of undocumented immigrants from Africa in the years following Ecuador’s visa reform.

A project of UC Davis, Humanizing Deportation shares the firsthand stories of migrants to better illustrate the connections between immigration policy and its consequences. As a graduate student of Spanish at UC Davis, Brooke has been part of Humanizing Deportation’s research team in Tapachula, Chiapas—Mexico’s southernmost state—where she met Valentin and others who crossed the Darien Gap. According to Kipling, refugees refer to the gap as “a graveyard of migrants.”

“It is one of the most dangerous jungles in the world due to both the incomparable quantity of lethal plants and animals that inhabit it,” says Kipling of the Darien Gap. “It is also a common drug trafficking route. Many people are kidnapped and forced to smuggle drugs into Central America.”

The group that Valentin traveled with stumbled across drug traffickers, but thankfully passed unharmed. (“They were simply doing their work—transporting drugs—and we were doing ours,” he says, matter-of-factly.) It was the thieves that proved the greatest threat. Even after desperately bargaining, the group paid $100 a head to the first guides, who promptly abandoned them. A second guide they chanced into charged them $5,500 to lead them into the aforementioned ambush.

But even without the coyotes hounding them, traveling through the Darien Gap was treacherous. Without any clothing or footwear suited for the terrain of mountains, valleys, swamps, and rivers, the refugees incurred many injuries. Before Valentin himself was left behind, the group had to leave another man.

“We could not carry him through the forest,” Valentin says. “He just kept bleeding.”

Along with Colombia, Panama, Costa Rica, Nicaragua, Honduras, and Guatemala, Mexico itself was supposed to be a waypoint on Valentin’s journey to the United States or Canada, where he planned to claim asylum, as per international law. As per Mexican law, he expected to be issued a humanitarian visa and sent on his way north. But recent wrangling between the Trump administration and Mexican President Andres Manuel Lopez Obrador has kept thousands of refugees like Valentin trapped in Tapachula for months.

In response to ongoing pressure from Trump to stem migration north, Lopez Obrador’s administration has tightened passage through Mexico’s southern border. In January, the Mexican president announced the formation of a new police force, the National Guard, which was deployed to Chiapas in July. Whereas people could once relatively freely pass between the Mexican-Guatemalan border, the National Guard is now stopping travelers, asking for their documentation, and detaining those without. Valentin himself spent 10 days in prison for entering Mexico illegally.

But in the eyes of Valentin and Kipling, more insidious than the new border police are the administrative roadblocks that Mexican immigration authorities are using to keep refugees from traveling north. After being released from prison, refugees like Valentin are instructed to apply for humanitarian visas through the Instituto Nacional de Migracion—but then their applications are roundly denied because of routine clerical errors. 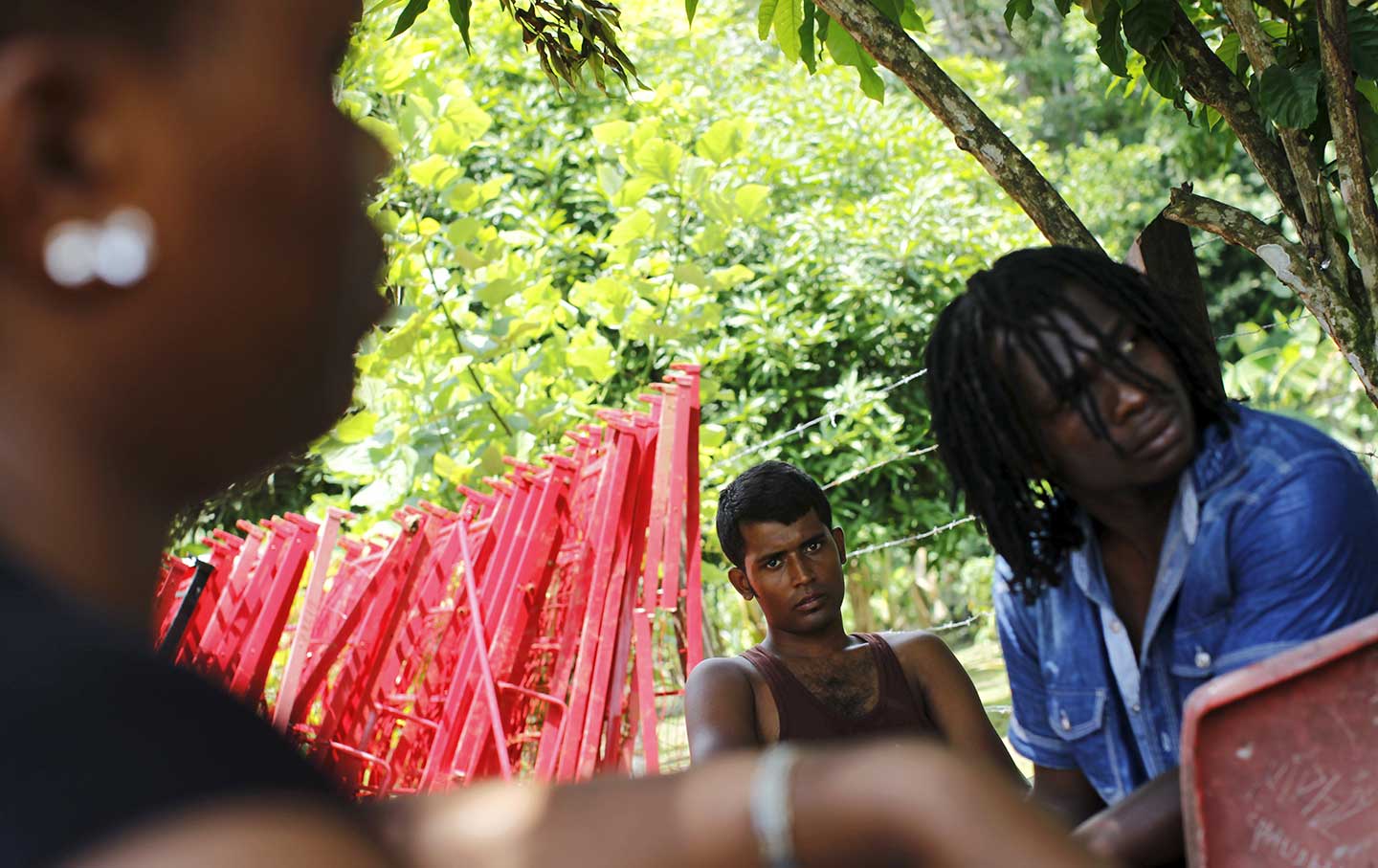 A migrant from Nepal, center, looks on next to migrants from Ghana at a provisional migrant shelter in Meteti in the Darien Province, Panama, after passing through the Darien Gap. (Reuters / Carlos Jasso)

“Our names were wrongly spelled, date of birth wrongly put, the language was incorrect,” says Valentin of the paperwork prepared by Mexican officials. “They told us that it was our problem.”

While denial grants the applicant 10 days to resubmit their visa application, Kipling witnessed firsthand the futility of the process.

“I spent a week navigating the labyrinth of the immigration and human rights offices in Tapachula with three Cameroonian refugees who were denied their visas for mistakes in the order and spellings of their names,” says Kipling. “After being attended by two separate United Nations offices who aided us in resubmitting the applications, all three were denied entrance into the offices of INM, where they needed to submit their applications and receive an appointment for their visas. The security guard stated that they were already denied their visas and therefore could not enter.”

Aside from pressure by the Trump administration, both Valentin and Kipling feel that racism is also influencing the Mexican authorities. Valentin estimates that nearly 4,000 of the refugees in Tapachula hail from Sub-Saharan Africa, like himself. Unfamiliarity with African culture and the language barrier—many African refugees speak no Spanish—may be causing some clerical issues, but Valentin also describes persistent discrimination since arriving in Latin America, being charged more for goods and services, while also being targeted for harassment and crime.

‘They Had Found Out That I Am Gay, and They Were Going to Kill Me’

In August, thousands of African refugees who had been in Tapachula for months began protesting outside the INM. They sang, chanted, and drummed while blocking building entrances and surrounding streets. The National Guard was called in to put down the demonstration, but it was also announced that human rights lawyers would be bringing the refugees’ demands to federal court.

Unfortunately, since then only a handful of the refugees have received permission to legally pass through Mexico. Others have tried to surreptitiously make their way north to no avail. Valentin describes the price of traveling in the shadows as robbery, rape, and even death at the hands of gangs, if not months imprisonment by the National Guard.

But deportation back “home” for a person like Valentin also risks death, so he holds on in Tapachula. Without much support from the government, NGOs, or charities, the refugees are living on the streets around the INM.

“We’re sleeping outside of immigration in tents—the same way we slept in the jungle, with no food, no water,” says Valentin.

“It was terrible passing through the forest, but that was not even hell,” he continues. “We are facing real hell here in Mexico, seeing humans treating others worse than animals.”