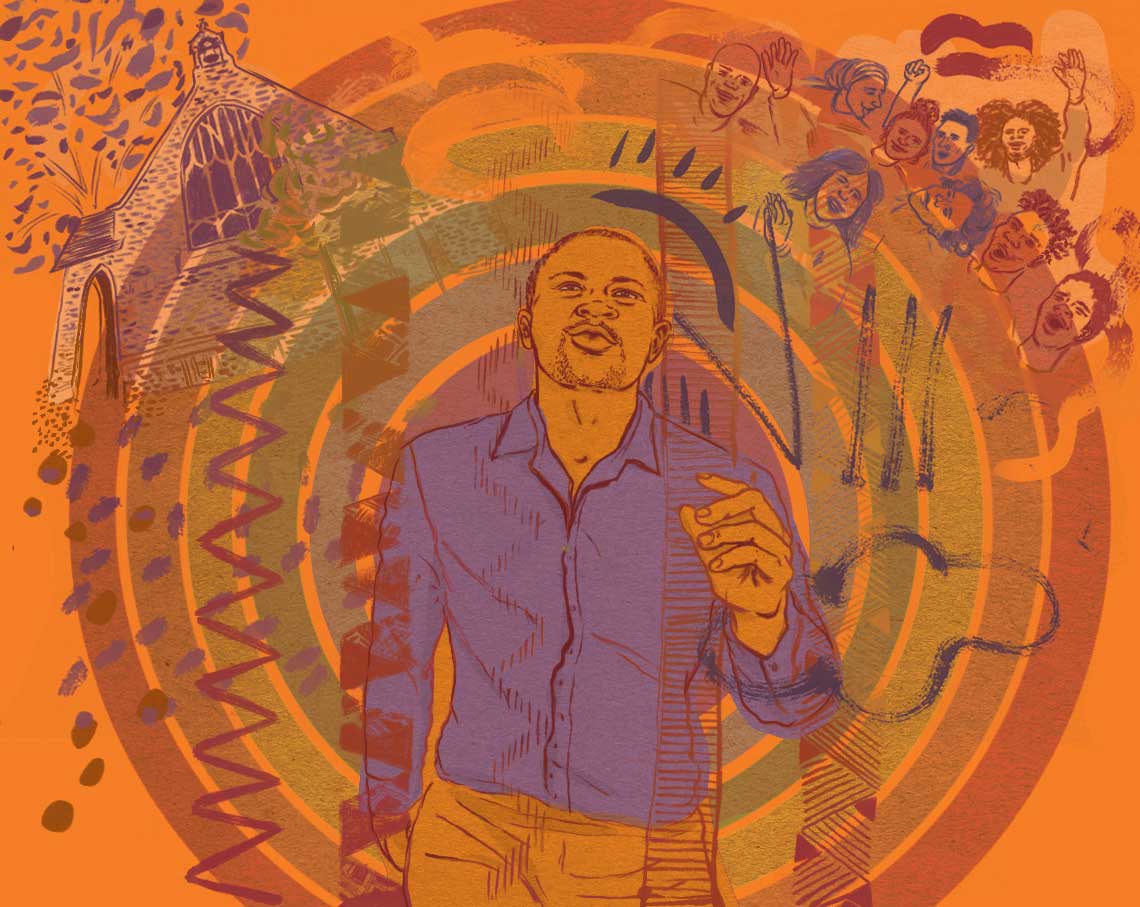 The borders of our world cut not only across international boundaries, they also increasingly stretch deeply into the interior of nations—into our homes, cities, communities, courts, and everyday interactions. Citizenship status, visa status, vulnerability to deportation—these are just a few of the dividing lines increasingly separating our country into different communities with starkly different options for how or if its members become full participants in our national experiment.

As immigrants in the United States, both documented and not, are increasingly under attack—stripped of their status, arrested, and deported—it’s critical that their stories are heard across these borders. “Migrant Voices” is an oral testimony project from The Nation exploring, and listening to, a variety of immigrant voices: from recent arrivals to asylum seekers making their case in the courts, from the undocumented keeping under the radar to the DACAmented on the front lines—people from all over the world who have fled or left their homes and are looking to find, or keep, their place in America.

This is the first installment of this series, and there will be a new one each month—follow the series here.

When I arrived at the RDJ shelter to begin our interview, Okporo was on his computer, watching the end of Donald Trump’s Rose Garden news conference following his declaration of a national emergency to build a border wall. For a few minutes, Edafe and I, both shaking our heads, watched the president bluster angrily at reporters. Growing up in Nigeria as a gay man, Okporo knows the cruelty of those who use their power to harm others—he fled his home their after he was beaten and robbed by a mob.

Now, Okporo is the executive director of RDJ, the only shelter in New York City that provides housing exclusively for asylum seekers and refugees who are experiencing homelessness. After our interview, Edafe went back to the computer, this time to show me some examples of the Nigerian gay-ballroom scene, telling me about the HIV testing parties he would throw. “I needed to throw parties to get people tested because there is such a stigma against HIV. People came dressed in high fashion.” The following is from our conversation that day.

I don’t know when I first nurtured the idea that I was going to leave Nigeria.… When I was doing my master’s in nutrition, I started doing activism, because in the community I lived in there was no clean drinking water, and I suffered from typhoid fever so many times. So I became a public-health advocate. I was living in Niger state then. This is a Muslim-dominated state that practices Sharia law. So I was teaching in the only school of technology that was there, in Rijau. So while I was teaching there I started advocating for public-health policies so they can have clean drinking water to reduce typhoid. But there was also a high rate of HIV transmission from mother to child, so when I left there and moved to Abuja, I discovered that my friends who were gay were also dying from HIV. So HIV became a big part of my life, advocating for gay men to have access to treatment. That was when I started suffering attacks.

Now, nobody has ever faced prosecution from these laws yet, but non-state actors, like community members, practice jungle justice, whereby they take law into their hands and persecute gay men and say they are working on behalf of the government to jail the gays and cleanse the gays from the community. This was when I started thinking I would leave the country one day.

I myself suffered this mob attack, where they kidnapped me. They took my phone, they took my wallet, and they went to the ATM where they held me hostage and took all the money I had in my account. This is like a way of making money from gay men, by blackmailing them.

But I was always open about my sexuality and about the work I was doing. The first win we had is that, in 2014, we worked with the AIDS commission in Abuja for the government to pass a bill that would enable gay men to have access to health-care services, but they would not be called gay men, they would call them MSM, Men who have Sexual contact with Men.

The last attack I suffered that made me flee was in 2016. They dragged me out of my apartment, they beat me on the street, slapping me. They had found out that I am gay, and they were going to kill me. So I blacked out. When I woke up, I found myself in a clinic. You see this scar on my head [he touches his finger to his hairline], this scar on my hand [he touches his finger to his right forearm, just below the elbow]; when I woke up in the clinic, I found these scars, because they were beating me with sticks, and they were clapping and singing that I’m gay. They had found out. That was the 24th of July. So when I woke up in that clinic, I found out that I have to leave the country. So I documented my case with ICARH [International Centre for Advocacy on the Rights to Health], and I fled to the United Arab Emirates, because I could get a visa to Dubai very easily.

I couldn’t seek asylum there, because they don’t have the law that allows you to seek asylum—and as a gay man, it is even worse in Dubai, so I stayed for some days, and then I came back to Nigeria. When I came back to Nigeria, I was in hiding, in my friend’s place. But in October of 2016, I won an award for being a gay man advocating for gay men to have access to AIDS-care treatments. This shined a spotlight on me. So I had to flee.

I got the visa on October 7 to come to the US to attend a conference with the Victory Institute, in DC, where LGBTQ leaders from around the world come together. When I landed at JFK airport… I don’t have any friends in this country, I don’t know anybody here… So I took my bag and I went to an immigration officer, JFK, Terminal 4, and I say, “My life is in danger in my country, because they attack me because I’m gay, and I’m a gay-rights activist in my country, and I don’t have anywhere to go.” And he told me to wait.

They asked me to wait there, one hour, two hours, three hours, four hours—after four hours, somebody came, they took me to a room, and they questioned me. They asked me to sign some papers saying I was going to be deported back to Nigeria, so I signed the paper and they took me to this cell, and they locked me in this cell in JFK. They told me that the paper I signed is for me to be deported, but I have a credible fear of persecution, so they’re going to take me to a jail, a detention center, and I would continue my case from there. [For the next five months, while held in the Elizabeth Detention Center, Okporo worked to find legal representation and apply for asylum.]

So we went [to court], and the judge asked me for my testimony, and so my lawyer questioned me, and the judge said, “Stop. I’m granting you asylum, because your case is consistent and coherent.” I went back to my room, and that same day, in the night, by 10 pm, they released me from the detention center.

When I got out, I was happy, but I was also sad. That is when reality dawns on you that you are alone in this country. Family and friends are nowhere to be found. There is an organization in new Jersey, First Friends of New Jersey and New York. Their board president came to pick me up, took me to the YMCA shelter in Newark. Now I’m a board member of First Friends. 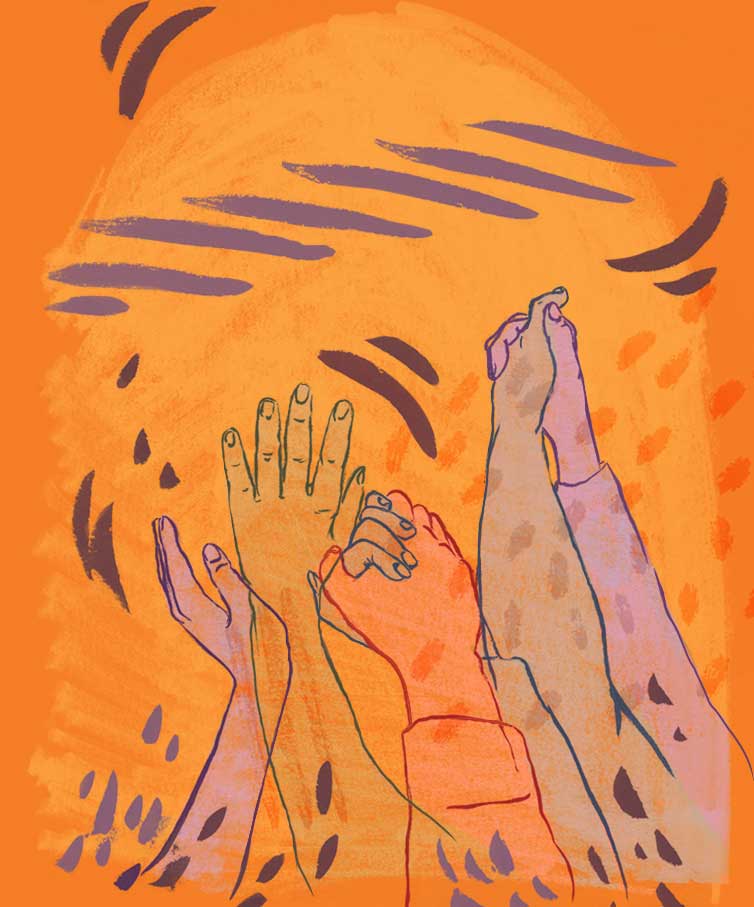 There’s a lady who came to do a PhD dissertation in Nigeria, she moved to New York in January of 2017. When she heard that I was released in New York, she chatted with me on Facebook. She lives in Sunnyside, Queens, and she offered me to stay with her free of charge, for three months. She gave me a computer, a Mac, and free WiFi, so I was learning, I was browsing, I was trying to figure my way out.

I got my first job two months after I got out of Elizabeth. I was working with Eat OffBeat [a catering company that works with the International Rescue Committee to provide restaurant industry jobs for refugees]. I moved to Jersey City, and I would commute to New York to work. I was the kitchen operation manager. And then I got a job in Paterson, New Jersey, doing HIV work, since it is something I am very passionate about. I tried to educate young gay, transgender, and bisexual people of color.

After some time I discovered that my passion is with refugees and migrants, and my immediate goal has changed from wanting to work on HIV to wanting to be an advocate for migrants, so that’s why I took this job [as executive director of RDJ Refugee Shelter in Harlem], because I knew how it was for me not to be able to have a place to live when I just came here.

I also wrote a memoir, Bed 26, that is being produced as a play. But I’m not a seasoned writer. I wrote the memoir because, growing up, I never saw anything about being gay. No stories about being gay, so writing this story for me is to help other young Nigerians who will be scouring the Internet looking for something about being gay to know that there is somebody like them.

Our struggles may either paralyze us or energize us. The choice is ours. I don’t see my struggle as paralysis. I see it as a way to push me forward to do better. People who become very successful in life do not achieve success in one day. They were consistent in what they do. People may not understand what I am doing now, but if I am consistent, I can change their hearts and minds.