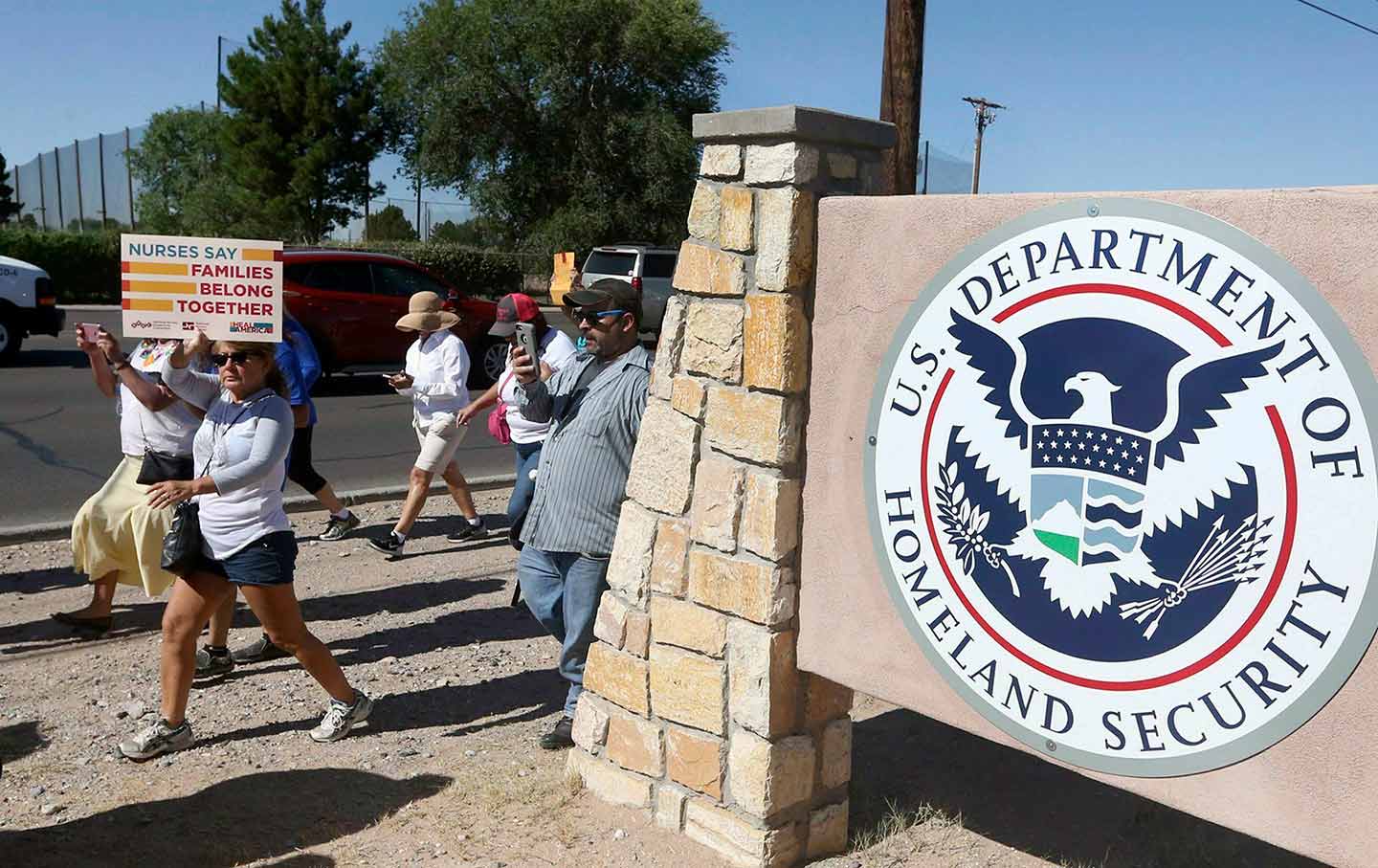 At Monday’s campaign rally in El Paso, Trump dished out his usual red-meat diet about building the wall and securing the border. Elsewhere in the border city, however, a group of migrants were going hungry in protest at El Paso’s immigrant detention center—part of a fresh wave of hunger strikes erupting in four cities—a desperate cry of anguish from about 15 detainees, awaiting legal proceedings while imprisoned by Immigration and Customs Enforcement (ICE).

Advocates for the detained migrants say they are being subjected to torturous conditions, including force-feeding. Although the force-feeding has now stopped, as reported in a closed-door court hearing last week, the reports of the tube-feeding of several detainees have drawn global condemnation. The detainees have already suffered physical and psychological damage, according to advocates: Attorney Ruby Kaur told the AP in late January that her client had dropped about 50 pounds, and that ICE officers had retaliated against the protesters, who hail from Punjab and Cuba, by placing some in solitary confinement and threatening them with deportation in order to “psychologically torture them.”

About 30 prisoners have engaged in the uprising over the past few weeks, protesting what they call a pattern of verbal abuse and intimidation by staff as they await immigration hearings in court. An uncle of two Punjabi detainees, Amrit Singh, told the AP that his nephews’ health was failing: “Their bodies are really weak, they can’t talk and they have been hospitalized, back and forth…. They want to know why they are still in the jail and want to get their rights and wake up the government immigration system.”

South Asian Americans Leading Together (SAALT), together with a coalition of immigrant-rights and legal-advocacy groups that included Desis Rising Up and Moving, Immigrant Defense Project, and the Sikh American Legal Defense and Education Fund, issued a letter to Homeland Security Secretary Kirstjen M. Nielsen describing the treatment—an alleged medical intervention that had been approved initially by a judge:

The force-feeding tube stays in their nasal passages 24/7. On some of the individuals, the tubes are too large, causing nasal bleeding and pain. Many of the detained asylum seekers have wounds and lesions on their throats and nasal passages, are suffering from rectal bleeding and bleeding while vomiting, persistent stomach pain, and are having difficulty speaking and breathing.

The detainees also complained of “being denied adequate language access inside the facilities regarding their legal rights and due process,” in violation of federal civil-rights laws as well as ICE’s own internal administrative standards, which were reformed under the Obama administration. Under Trump, those standards have not just unraveled; the White House seems to relish in shredding them as it arrests and detains migrants at unprecedented rates.

“Unfortunately, I would not be surprised if at least some folks were deported back,” says Lakshmi Sridaran, SAALT’s director of national policy and advocacy. Noting that some detainees have reportedly been medically cleared for travel, she warns that given their deteriorating health, “They are in no medical condition to get back on a plane under any circumstances.”

The 12 hunger strikers join nearly 1,400 other detainees at 18 detention facilities across the country who have gone on hunger strike since May 2015, according to Freedom for Immigrants. Civil disobedience in detention involving South Asians also echoes a pattern dating back to the Obama administration. In 2014, another group of 37 asylum seekers from Punjab, also held at the El Paso prison, protested against similar maltreatment—including lack of language services and inadequate medical care. The following year, a similar uprising occurred at El Paso, involving 54 detainees—mostly asylum seekers from Bangladesh, Pakistan, and Afghanistan—who went on hunger strike to protest inadequate medical and language services, as well as prolonged detention and denial of due process. In both the 2014 and 2015 protests, the migrants were denied bail or parole, even though many had passed their “credible fear” interviews, the initial screening for humanitarian protection. Advocates also criticized ICE’s unusual decision to invite Indian and Bangladesh consular representatives to visit without the detainees’ prior consent. What seemed to be a gesture toward diplomatic oversight was, according to SAALT, actually dangerous for the detainees, as it exposed them to consular officials while they were simultaneously seeking asylum protection to escape persecution in their homelands.

Though the exact nature of the current protesters’ legal claims is unclear, past detainees from India and Bangladesh have pleaded for asylum on the basis of political and religious persecution (for instance, Indian Sikhs and migrants associated with the political opposition in Bangladesh, of whom the numbers arriving in the United States have exploded since 2010). Yet South Asian asylum seekers face deepened hostility under Trump, whose counterterrorism crackdowns have stiffened immigration barriers facing South Asians and Muslims.

The El Paso detainees might face particular legal difficulty, since the regional immigration court is known for a high rate of asylum-claim denials. In general, asylum seekers from India fare poorly in the courts. According to researchers at Syracuse University, India ranks among the highest in denials of asylum claims from fiscal years 2011 through 2016, with a rejection rate of more than 40 percent.

Even if the current hunger strikes ultimately end with the deportation of the detainees, SAALT hopes that the protests spur congressional oversight investigations into the detention system, under the new Democrat-controlled House. In regard to the ongoing congressional debate over immigration policy, Sridiran noted that the El Paso protests remain a chilling reminder that the politics of immigration reform involve much more than Trump’s rabid rhetoric about a mythical border wall.

In Washington, Sridiran says, the fixation on symbols overlooks the systemic human-rights crisis in ICE: “So much focus is on the wall. But [there’s also] so much short of having a wall that’s so harmful and detrimental. And that’s a message that we’ve been taking to Democratic leadership too—that you can’t accept all of these increases in enforcement without any kind of transparency around what’s already going on. And the fact that ramping up enforcement short of a wall is not a solution because…what you’re going to keep getting is these conditions.”

Days after Trump whipped up the crowds in El Paso to cheer for the wall, Congress approved a measure to replenish funding for border security in a “compromise” Homeland Security budget bill. But the legislative compromise—which Trump promptly upstaged by declaring a national emergency—has compromised the rights of migrants at the border, who are thwarted and imprisoned every day, and it continues to quietly compromise the dignity of the protesters in detention, who continue starving silently for freedom in Trump’s America.