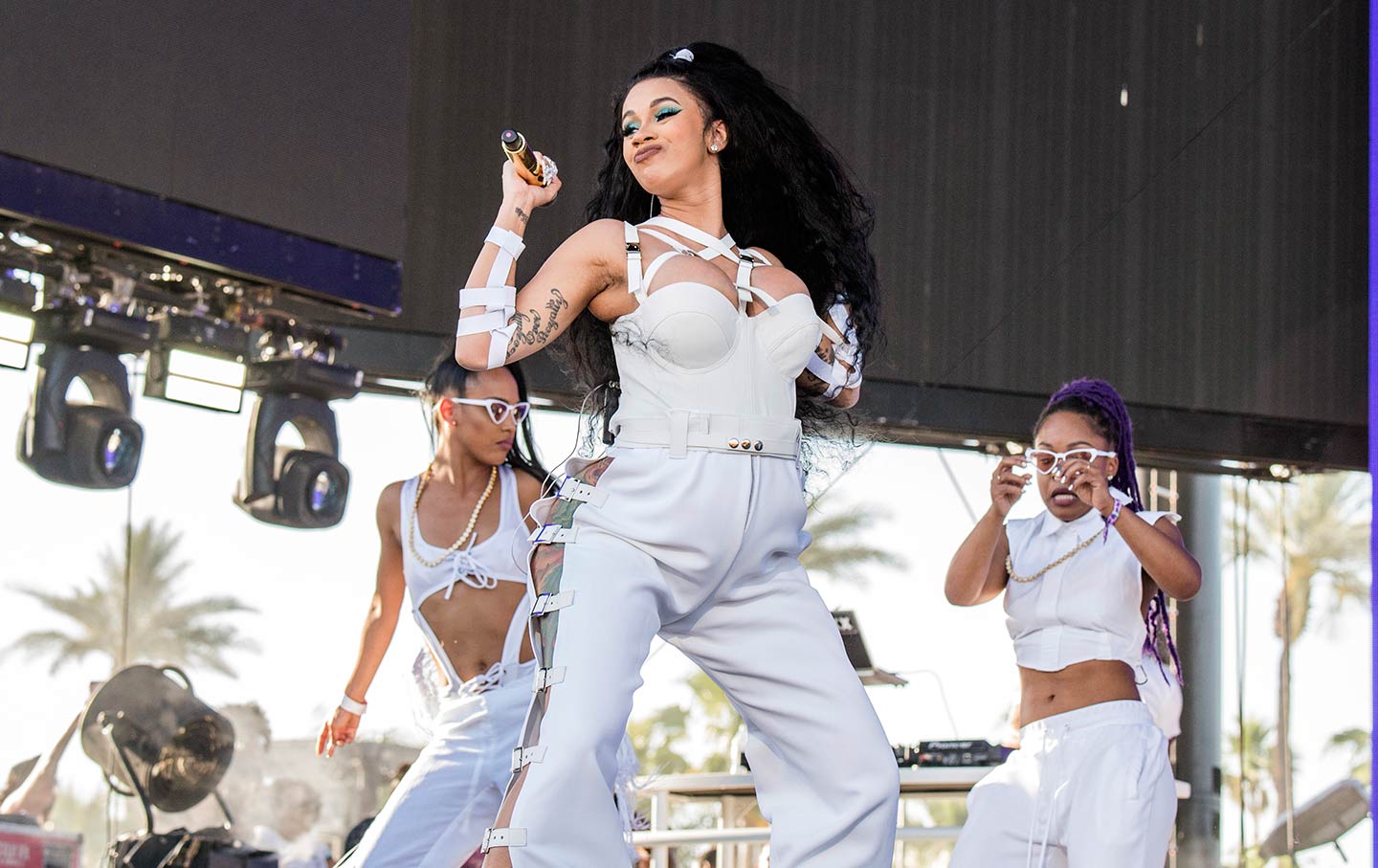 Cardi B performs at the Coachella Music & Arts Festival on April 22, 2018, in Indio, California. (Photo by Amy Harris / Invision / AP)

“You don’t look Latina” and “You’re not Latina” were common phrases I heard growing up.

For many, my brown skin and super-curly hair didn’t match up with their image of what a Latina was supposed to look like. It didn’t matter that half my family was from the Dominican Republic, and that I was proud to represent my Dominican side—to them, I didn’t make sense. I could not be both black and Latina at the same time.

Several years and identity crises later, and I’m still working through my racial and ethnic identity and trying to decide. Whenever someone says Latino, I know they do not mean me. I know they mean someone who looks like Sofia Vergara or Alex Rodriguez. And while the term Latinx increasingly feels less relevant to me as I grow and become more critical about my identity, it is also something to think about frequently. Should I fight for representation within the Latinx community? Or do I accept my identity as one solely within the black community?

It’s not just me. Identifying as Latinx or Hispanic (a term with which I never fully felt comfortable) has never fully encapsulated the diversity of Latin America, and it’s an ongoing issue in the United States. Some people forget that “Latinx” and “Hispanic” are terms to define an ethnicity and not a race. Even Latinos themselves forget this, often self-identifying as Hispanic or Latinx and ignoring the race question. Census officials are currently in the midst of trying to remedy this problem by changing the way in which Census questions are framed. In a 2015 test Census, they noticed that more self-identifying Hispanics would answer with a combined race-and-ethnicity question and a write-in area where others would indicate their national origin.

Both Latinx and Hispanic are relatively new terms in the grand scheme of racial and ethnic identification within the United States. “Identity” is one that is constantly evolving and changing as new names are created and modified. But to first understand how these terms fail to capture this Latin American identity, it’s important to understand their etymological origins.

The origin of the term “Hispanic” can be traced back to 1970. It was created after Latinx activists lobbied for a broad category to name the Spanish-speaking population that was growing within the United States, according to Latino USA. Prior to that, Latinxs, who were mainly Puerto Rican and Mexican, were being thrown into a broad racial group of whiteness. Mexicans were defined as Mexican in the 1930 census, but this left out those who were not white or white passing. Some notable examples are Piri Thomas, who writes about his experiences as a black Puerto Rican in New York City in his memoir Down These Mean Streets, or Miguel Algarín, a Puerto Rican poet and co-founder of the Nuyorican Poets Cafe.

In an interview with Latino USA, C. Cristina Mora, author of Making Hispanics—which recounts the history of how the terms “Hispanic” and “Latino” were created and utilized in the United State—explained that prior to the creation of the term “Hispanic,” national identity was stronger and more salient among Mexicans and Puerto Ricans that lived in the United States. The National Council de La Raza, created in 1968, became one of the first groups to lobby for the creation of the term, which, according to Mora, brought “Puerto Ricans and Mexican Americans together to hammer out a Hispanic agenda.” “Hispanic,” however, referred to primarily those of Spanish-speaking descent—Spaniards could be included in this term, while Brazilians could not. In addition, “Hispanic” suggests a connection to Spain, or the colonizer, which some are uncomfortable with. Thalya, a black Dominican I spoke with, noted that she did not identify with “Hispanic” “because I do not claim any link to Spain.” Growing up, my mother told me that “Hispanic” meant “his panic” or “he who sees us panics,” which quickly ended my identification with the term.

As “Hispanic” did not remedy these problems, another word was created: “Latino/a.” The term “Latino” came later, in 1997, according to Dr. Darío Fernandez-Morera, allowing the term to be used in the 2000 Census. “Latino/a” gained prominence to largely name the descendants of Latin American origin within the United States. It was meant to be more culturally inclusive to non-Spanish speakers within Latin America, while also removing the colonial identifier of “Hispanic.” Therefore, it could include Haitians, Brazilians, Belizeans, and more within the term. The term was modified into “Latinx” to be more inclusive of nonbinary individuals and this form has gained prominence within mainstream media over the last few years. Its origins can be traced back to the early 2000s.

But these terms still fail to include all the diverse groups of Latin American people. What is a Latino? What is Latino culture, or Latinidad? Is there one? In my experience, my national and regional identity have meant more to me than my ethnic identity as a Latina. I have found more commonalities with Dominicans and other Caribbean Latinos than I have with non-Caribbean Latinos. I am not alone with these feelings and identity crises. A lot of Latinxs, especially the children of immigrants or immigrants who grew up in the states, find themselves troubled by the US racial identifiers. Am I white? Am I black? Am I Latino? Am I neither, or all three?

Hennessys Gill, a black Latina of Central American descent, told me that her identity has evolved as she’s grown up. When she was younger, she said, she “couldn’t grasp how I was Latina but ‘looked’ black.’” Veronica Santana, an ethnically mixed but racially white Latina of Mexican descent, also addressed this disconnect. She noted that she felt she could not identify with her Mexican side because of some disconnect she had with her Mexican family, as well as her white-passing privilege and inability to speak Spanish.

Ideas of race and language as well as gender, sexuality, and other identifiers greatly affect how we identify. Thayla noted that, for her, this Pan-Latinx identity is “weakened due to people in Latin America and in the diaspora being marginalized by race, class, language, religion, sexuality, and gender identity” and that she questions “the utility of an identifier that is tied to a racist colonial legacy.” The myth of mestizaje, or mixedness, is one that many Latin American countries in addition to the United States have pushed to create a commonality among Latinos. However, the growing media presence of Afro-Latinos, from Cardi B to Amara La Negra, is slowly but surely pushing this idea away.

So then we are left with the question: What is the Latino? Are we as people holding on to an identity that truly has no real meaning in 2018? When I think of Latinidad, I can’t help but think of the stereotypical images of Latinos, which do not include me. So then what do we do? Do we just throw out the term and start anew? Do we default to saying “race is a social construct” and that none of these labels really work? We need to stop trying to use this term to create a broad statement about oppression as Latinxs, because we are not affected by the same issues.

After all, an undocumented Central American from California faces different issues, such as risk of deportation, than a white-passing Cuban from Miami who can assimilate into the United States easier, just as a black Dominican from New York faces her own issues, such as colorism. We need terms that can encapsulate this rich complexity.