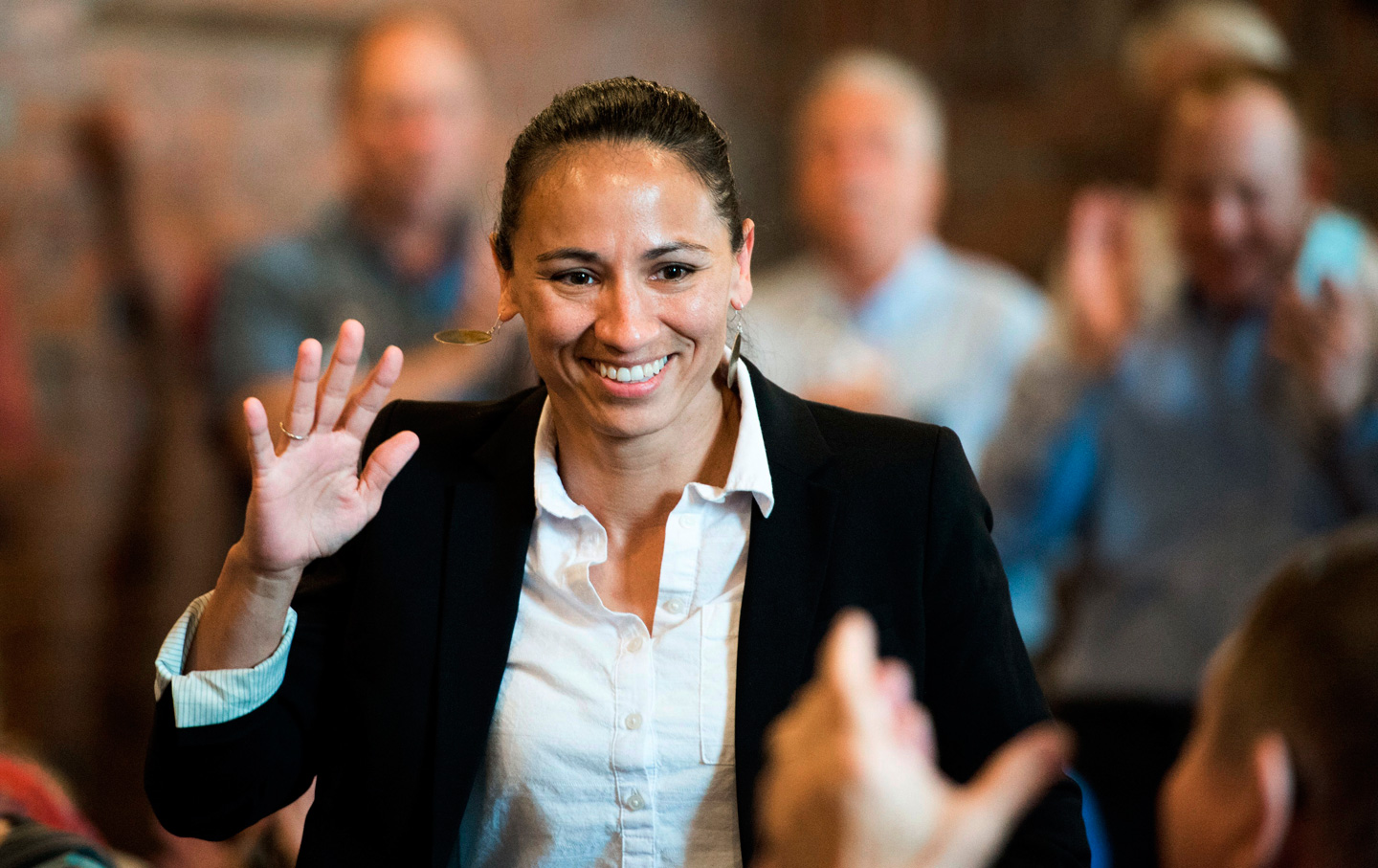 Sharice Davids waves at her supporters at an event in Kansas City, August 8, 2018. (Shelly Yang / The Kansas City Star via AP)

An iron rule governs mainstream-media political coverage: Even when Democrats are winning, they’re losing. So in the absence of a big upset win by Danny O’Connor over Troy Balderson in Ohio’s 12th Congressional District Tuesday night—the young Democrat trails by just 1,700 votes with thousands of provisional ballots to be counted, a clear rebuke to Republicans who outspent Democrats four to one in a district Trump carried by 11 points—the media has bad news for progressives: Democrats are dramatically divided, and their left flank is flailing.

At least five big articles have made that point in the last 24 hours: “Democratic Party’s liberal insurgency hits a wall in Midwest primaries,” The Washington Post declared. “The far left is losing,” U.S. News & World Report screamed. Politico hit the story twice, with “Down goes socialism” and “Bernie and his army are losing 2018.” CNN weighed in with “Alexandria Ocasio-Cortez’s movement failed to deliver any stunners Tuesday night.”

All of these articles are themselves a correction to an earlier false media narrative: that the victory of Alexandria Ocasio-Cortez over Democratic stalwart Joe Crowley in a Queens-Bronx district heralded a radical makeover of the party in the image of Sanders and AOC, as she’s now affectionately known. That was silly: Ocasio-Cortez owed her victory to hard work; a clear, appealing message; a sharp, talented messenger; and the felony incompetence of the Democratic machine in Queens and the Bronx, which didn’t take the young socialist challenger’s bid seriously until it was too late. Her message offers hope to other young leftists primarying long-in-the-tooth, complacent Democrats in urban districts. But it tells us little about the future of the Democratic Party outside of two New York boroughs.

Nevertheless, that media narrative was enough to bait centrists into declaring war on Ocasio-Cortez. The irrelevant Joe Lieberman, who left the Democratic Party and endorsed John McCain over Barack Obama in 2008, urged Crowley to run against her on the Working Families line. Sensibly, Crowley declined; just as the left declined to be baited into debating Lieberman, and his effort to split his former party barely made a ripple in the political waters.

The next big move came from Ocasio-Cortez and Sanders, when they announced a Midwest swing to boost insurgents in Michigan and Kansas. “They said it wouldn’t work in the Midwest,” the New York congressional nominee declared to a fired-up Kansas crowd. They turned out in large numbers to see their progressive endorsees, Brent Welder and James Thompson in Kansas’s Third and Fourth Congressional Districts; and for Michigan gubernatorial candidate Abdul el Sayed and Rashida Tlaib in the state’s 13th Congressional District.

The big crowds they drew didn’t tell the whole story, however. There was a bit of a backlash against Sanders and AOC’s snubbing Sharice Davids for Welder in Kansas. Davids is a Native American lesbian who grew up with a single mother and had the strong backing of Emily’s List. And their dismissal of Gretchen Whitmer in Michigan, who was also endorsed by Emily’s List, as a centrist shill using “a corporate dark money PAC” to be elected also rankled. Neither woman, it’s true, fully supports Medicare for All (in Michigan, Whitmer’s opponent, Abdul El-Sayed pushed a state-only program that even lefties admit would be hard to implement). But ranked against the current Democratic occupants of the House and Senate, and statehouses across the country, both would stand solidly on the left side of the spectrum.

So when Davids and Whitmer won Tuesday night (the Michigan state legislator beat El-Sayed by 22 points), the stage was set for those punishing anti-left headlines I ticked off earlier. “This is a fantastic night for centrist Democrats,” Third Way’s Jim Kessler crowed in The Washington Post. “We nominated the right candidates who can win House seats and governor’s mansions for the Democratic Party. There’s a quiet enthusiasm in the middle.”

I’m not aware of Third Way, a centrist think tank, actually lifting a finger for any of Tuesday’s candidates, by the way. I’m not sure either Whitmer or Davids would label themselves Third Way centrists. But at any rate, they get the story wrong. For one thing, Sanders and AOC scored two wins in Michigan and Kansas, with victories by Tlaib and Thompson. That’s not bad. It’s true that Ocasio-Cortez also supported Cori Bush against Representative Lacy Clay in Missouri and Fayrouz Saad against the Hillary Clinton–endorsed Haley Stevens in Michigan’s 11th Congressional District. Both lost, but neither got the attention of the four she and Sanders stumped for together.

The real story is that progressives won big on Tuesday might, because by only the most cramped and divisive standards would Davids and Whitmer be considered “centrist.” Both are open to Medicare for All as an end goal but favor Medicaid expansion in the meantime. Both are staunchly pro-choice and pro–Planned Parenthood funding, favor gun-safety reforms and protections for DACA youth as well as comprehensive immigration reform. Whitmer supports a $15 minimum wage.

“I hate to make these stories harder, but there’s not just one ‘establishment’ and one defined group of ‘progressives,’” Christina Reynolds of Emily’s List told U.S. News. “It’s just not that simple to split the party in two, or to define either group.”

It’s true that Sanders’s longer record is less successful than Ocasio-Cortez’s brief one. Despite big wins with AOC and Ben Jealous, the Democratic nominee for Maryland governor, he suffered losses by Dennis Kucinich, Cathy Glasson, and Tom Perriello in governor’s primary races in Ohio, Iowa, and Virginia respectively, as well as defeats in a handful of congressional races as well. Our Revolution communications director Diane May notes that Sanders and the group—they don’t always endorse the same candidates—share a goal of “movement building,” not just victory. And it may be that some of these Sanders-backed politicians will do better next time around.

But there’s no denying that Sanders, and the supporters arrayed behind him, have already helped pull the Democratic Party to the left—although he remains a divisive figure to some after his 2016 primary challenge to Clinton (and his pause before giving her his full-throated endorsement when the primary was over). It’s unfair to blame Ocasio-Cortez for that past. In fact, she kept a promise and endorsed Sharice Davids within hours after her close race was called.

Congratulations, @sharicedavids! Your win is an incredible inspiration to so many, myself included.
—Alexandria Ocasio-Cortez (@Ocasio2018) August 8, 2018

Meanwhile, progressives beat back a right-to-work law in Missouri, and the Ferguson prosecutor who put little effort into finding the truth behind Michael Brown’s death five years ago lost to criminal-justice reformer Wesley Bell. There are a record number of women running for Congress and governor, most of them Democrats, and most can (or should) be considered “progressive.” After her win, Sharice Davids’s race got moved from “leans GOP” to “toss up” by the non-partisan Cook Political Report.

Imagine the next Congress with Rashida Tlaib, Sharice Davids, and Alexandria Ocasio-Cortez—then work to make that happen the next time someone wants to fight about who’s the true progressive.