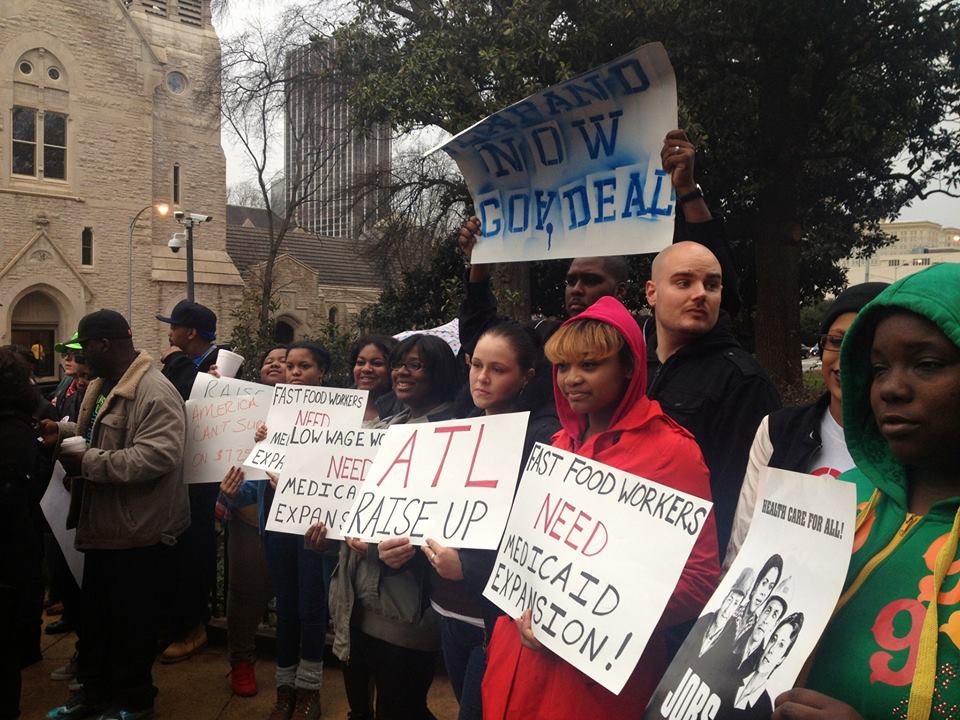 Hundreds of Moral Monday demonstrators gathered on the steps of the Capitol this week to protest Governor Nathan Deal’s refusal to expand Medicaid under the Affordable Care Act. According to the Kaiser Family Foundation, more than 400,000 people in Georgia will be denied Medicaid coverage by state leaders.

“Healthcare and access to healthcare—preventative services as well as treatment—is a civil right, a human right, and a moral right,” Otis Brawley, chief medical officer for the American Cancer Society and a physician at Grady Hospital, said to WABE 90.1 FM.

While Deal argues that the state can’t afford Medicaid expansion, while protesters counter that the federal government would pick up the vast majority of expansion costs. Twenty-two other states have also rejected the expansion.

“Make them hear you,” North Carolina NAACP President Rev. William Barber told the crowd. “Don’t make a deal with injustice. Do what is right.”

In South Carolina, progressive groups held a “Truthful Tuesday” protest at the State House to also protest that the Legislature’s failure to enact the expansion in addition to the failure to provide high-quality education to all children, and a failure to protect voting rights.

“Whatever North Carolina has done in terms of advocating for moral and ethical laws, our state needs to do the same thing,” said The Reverend Brenda Kneece, executive minister of the South Carolina Christian Action Council, a group that represents sixteen denominations and 4,000 congregations. “This rally on Tuesday … is the opening day of the (legislative session), and we want on that day to speak truth to power.” Kneece encouraged protesters to “wear black as a sign of mourning for the hundreds of lives which will be lost as a result of our state’s failure to expand Medicaid this year,” The State reports.

“It’s to really put lawmakers on notice regarding the need to expand Medicaid and protect voting rights and to fully fund public education,” says George Hopkins, a College of Charleston history professor and Charleston chapter president of the SC Progressive Network. “Hopefully on Wednesday the 15th the headlines across the state will read ‘Citizens Descend on Columbia’ to demand legislators take action on these issues.”

The Republican-controlled Legislature last year rejected billions of dollars in federal money that would have expanded the state’s health insurance program for the poor, arguing that expansion would cost the state close to $1 billion in the long term.

This year, Republican leaders are pushing a bill that would make it more difficult for people to sign up for federally subsidized health insurance policies. That bill, H.3101, is before the state Senate.

Addressing the anti-Obamacare protesters, state Rep. Bill Chumley, R-Spartanburg, praised H.3101 as a “nullification” bill, saying it would render Obamacare “null and void” in South Carolina. But state Sen. Tom Davis, R-Beaufort, the author of an amendment the Senate will debate in the coming weeks, said South Carolina cannot nullify federal law that has been upheld by the U.S. Supreme Court.

Anitra Johnson, a military veteran from Goose Creek, told the crowd she was rejected on the federal marketplace because she did not qualify as impoverished, under federal guidelines, The Island Packet reports. She claims she would have been eligible had the state Legislature agreed to expand Medicaid.

“This is the new face of poverty,” she told the crowd. “Take a good look. I don’t live in a Third World country. I’m right here.”