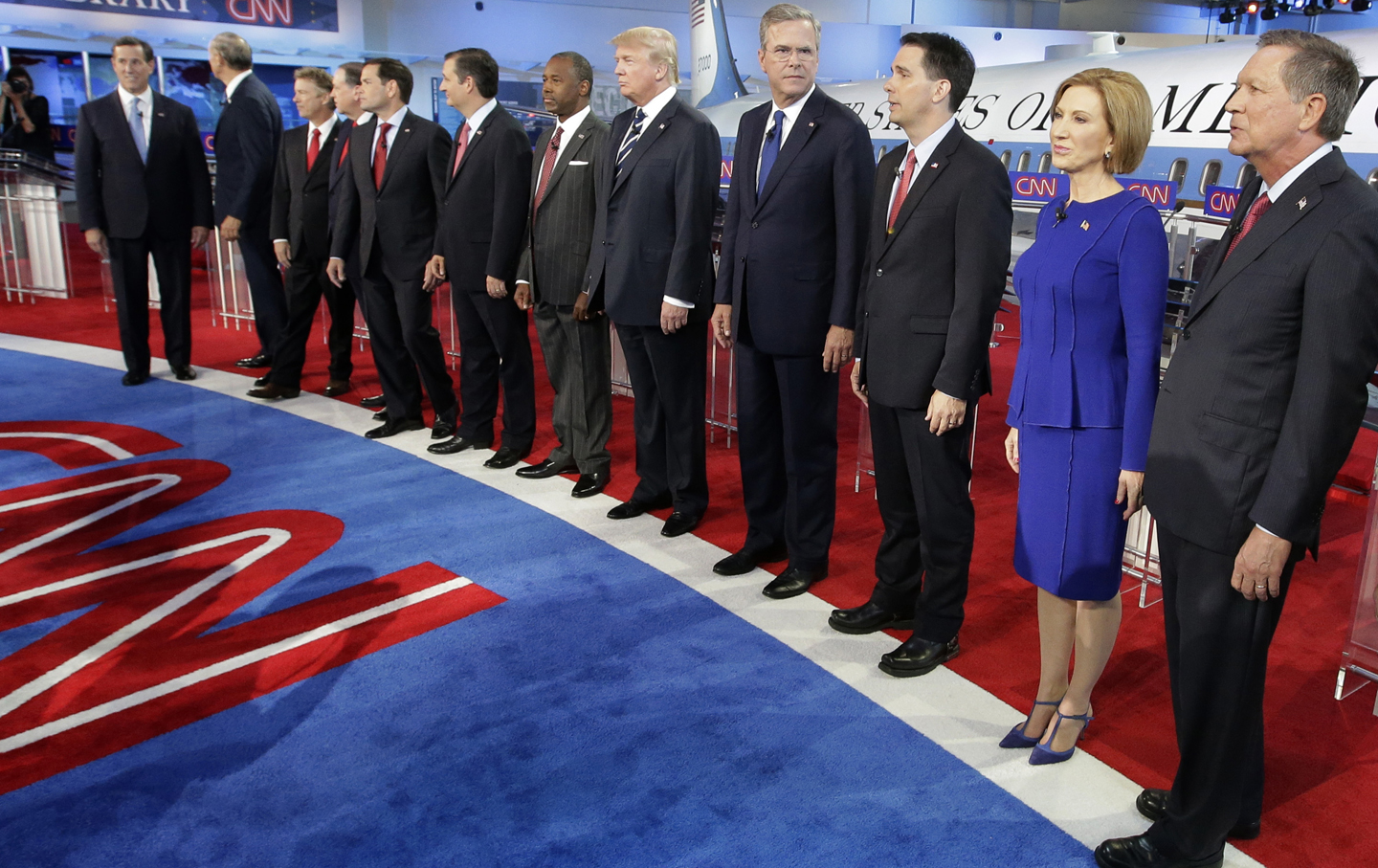 You may have heard that Carly Fiorina won the September 16 CNN debate and has since entered the “top tier” of Republican presidential candidates. Well, for now that’s true, but in the long run, the true winner will be the same guy who won the August 6 Fox debate and is winning pretty much every political debate we have in this country these days: Roger Ailes.

Allow me to explain: Ever since Ailes founded Fox News in 1996 (with Rupert Murdoch’s money), the station has served as a propaganda arm and ideological enforcer for the Republican Party even as it pretends to be a news network. Its broadcasts ignore reality whenever convenient, preferring to purvey whatever misinformation and/or ideological obfuscation serve Ailes’s strategic and financial purposes. Because the network’s loyal viewers believe whatever nonsense it broadcasts, and because they happen to be the conservative movement’s most dedicated activists, Republican politicians have no choice but to pander to them. Members of the political media are therefore faced with a choice: expose the nonsense or try to imitate it. Alas, most of them—or at least their bosses—took a look at the billions of dollars Ailes and company rake in and, well… money talked.

The degree to which CNN prostituted itself to the Republican Party during the debate would be shocking had this frog not been slowly boiling for over a decade. To earn the right to charge advertisers 40 times its normal rate for a program that reached a record 23 million viewers, CNN executives agreed to allow the deranged right-wing radio announcer Hugh Hewitt to help steer the debate. One imagines they also instructed their own host, Jake Tapper, to invite the candidates to lie with impunity because no self-respecting journalist would have allowed himself to be part of such a degrading performance unless specifically ordered to do so.

It would take an entire issue of this magazine merely to catalog the falsehoods Tapper and Hewitt let slide that night. They ran the gamut from national security to economics to vaccination to climate change to immigration. George W. Bush did not “keep us safe,” and it was his administration, not Obama’s, that ensured both the US exit from Iraq and the growth of ISIS. The Iran deal does not rest on self-inspection, and Iran did not invite Russia into Syria. Vaccinations do not cause autism. Climate change is not in doubt, and attempting to address it would not “destroy” the economy. Undocumented immigrants do not cost taxpayers $200 billion a year. Social Security is not going insolvent. Hillary Clinton is not being investigated because she “destroyed government records.” Believe me, I could go on (and on). These lies, half-truths, and outright crazy statements were so stupid as to be offensive to common sense. And yet because Tapper and Hewitt chose not to challenge them, CNN was not only not supporting democratic debate but actively undermining it.

True, many media institutions did run post-game “fact-checks,” but these same institutions ignored them when the time came to tally up the score. Hence, Fiorina was chosen as debate champion because her lies were considered to be the most effective. According to The Washington Post’s Karen Tumulty, “pretty much everyone agreed that [Carly] Fiorina…had won the evening.” The paper’s political handicapper, Chris Cillizza, termed her “emotional call to a higher moral authority when talking about Planned Parenthood” to be “the most affecting moment of the debate.” Yet neither Tumulty (who won a 2013 prize for “Excellence in Political Reporting”) nor Cillizza (whose “Mouthpiece Theatre” series with Post colleague Dana Milbank once suggested that Hillary Clinton should be served a bottle of “Mad Bitch Beer”) thought it important to note her transparent dishonesty.

The New York Times’s front-page lead story also celebrated Fiorina as “a credible antidote to the gender gap and the Democrats’ claims of a Republican ‘war on women.’” A reader had to wade through more than 1,200 words of padded fluff before learning that the “most affecting moment” staged by this “credible antidote” was a brazen lie. There is no evidence in the secretly taped Planned Parenthood videos of “a fully formed fetus on the table, its heart beating, its legs kicking while someone says we have to keep it alive to harvest its brain.” As the story mentions in passing in paragraph 23, “The video that Mrs. Fiorina seems to be referring to does show a still image of a fetus being held outside the womb. But it is not seen squirming as Mrs. Fiorina describes, nor is there any indication that it is about to have its brain removed.” (Her foreign policy pronouncements were even more objectionable… if that’s possible.)

Tapper dived so deeply into right-wing Republican waters, he swam in its xenophobia as well. How else to describe his use of the term “illegal immigrants,” a phrase that’s loaded with conservative assumptions about who is and is not welcome in this country?

Most depressing of all, Tapper found himself celebrated in the MSM for his failure. Ira Glass tweeted, “What a great job getting candidates to talk to each other. A model. Respect.” Bob Woodward used his first tweet ever to announce “@jaketapper soared as the New Boss in the #gopdebate, asserting his authority and making vividly clear his political neutrality.”

The fellow sipping champagne, however, should be Roger Ailes. Thanks to his genius, the Republican presidential primary is a parade of liars, xenophobes, misogynists, and, let’s be honest, lunatics. And the leading lights of American journalism do not merely enable them; they cheer them on. Like victims of the so-called “Stockholm Syndrome,” they’d rather switch than fight. Too bad it’s our democracy that’s really being tortured.